The world has changed a lot in the last century and a half. Turn off your light bulbs and throw out your plastic. Hang up the telephone and disconnect the internet. Stop writing with your ballpoint pen and forget about hopping on a plane to travel overseas. Your world now looks somewhat more like the world 150 years ago – the world when IWC started manufacturing timepieces in the Swiss town of Schaffhausen. Jump to the year 2018 and IWC is celebrating this enviable milestone with the release of the Jubilee Collection. To better understand the new collection, we should first delve into the rich watchmaking heritage that is IWC.

From Across the Atlantic

For a Swiss watch company, IWC is far more cosmopolitan and international in its origin than it is Swiss. Perhaps Boston watchmaker Florentine Ariosto Jones knew this all too well when in 1868 he founded his aptly named watch brand, International Watch Company (IWC). From inside its headquarters on the banks of the Rhine, Jones planned to break into the American market for pocket watches – having worked as superintendent at E. Howard & Co before starting his own company, he knew the market well.

Conflict with management meant that Jones left Schaffhausen and crossed the seas home to America, so in 1880 local industrialist Johannes Rauschenbach-Vogel took control. Only a year later Johannes’ son takes the helm and brought with him an era of innovation, including the production of Pallweber – the first watch faces to feature a digital display.

Fast forward to 1905 and the beginnings of the age of Ernst Jacob Homberger. An age of historic milestones, 1936 witnessed the launch of the Special Pilot’s Watch and in 1939, the first Portugieser was born – two watches that have since come to epitomise IWC.

Similarly, the post-war years witnessed notable developments in IWC’s watchmaking history. The 89-calibre ‘Pellaton’ movement of 1946 for example, embodies the aspiration to maintain precision despite the magnetic fields created by new technologies which disrupted accuracy. In 1967 IWC released their first foray into diving watches with the Aquatimer and in 1980, the company produced the first ever chronograph in a titanium case.

IWC’s history is decorated with examples of bold innovation within the watchmaking industry. Its timepieces have, at every hurdle throughout a period of great socio-political upheaval, remained relevant, refined and resolutely entrenched in the Swiss watchmaking traditions.

To celebrate 150 years on wrists, IWC has released 29 new watches to form its Jubilee Anniversary Collection. Celebratory editions from the core Portugieser, Pilot’s, Da Vinci and Portofino collections make up most of the range, duly providing a refined selection of timepieces to choose from. Including chronographs, annual calendars, hand wound movements and moon phases, the collection is varied, considered, and notably accessible from an array of price points.

Yet perhaps the most exciting member of the Jubilee family is one which has not been seen since the company’s inception. In a homage to the original Pallweber pocket watch of 1884, IWC released the Tribute to Pallweber ‘150 Years’in variations of platinum, red gold and stainless steel. Powered by a manual-winding 94200 Calibre movement, the digital format displaying the hours and minutes – a direct reference to the original Pallweber watch – makes the watch the first ever IWC wristwatch to feature a jumping numeral module. The digits on the display rotate on three separate disks (for single digit minutes, for ten minute segments, and for hours) and whilst the disks look identical, each disk is either aluminium, steel or copper to achieve accuracy in weight and friction. The result is an elegant and tastefully playful nod to the past.

However, the Pallweber tribute could not contain itself to the wrist. A resolute remake of the original, IWC treated its fans to the Tribute to Pallweber ‘150 Years’ pocket watch. As the first pocket watch to made by IWC in the 21stcentury, the Tribute to Pallweberprovides a timelessly tangible embodiment of the company’s heritage. IWC’s history is defined by a clear determination to build upon and expand the traditions of Swiss watchmaking – evident right from its early beginnings in Schaffhausen, all throughout the innovative periods of leadership of notable figures such as Jones, the Rauschenbach-Vogels and Homberger, and today. With its Jubilee Collection, IWC has again stepped forward in its characteristically self-assured manner, but all the while taking subtle glances back at its own rich watchmaking heritage.

Sometimes over time, the family home becomes too small. Sometimes over more than a century, the company watch factory can also become too small. But where to move from Schaffhausen? Earlier this year CEO Christoph Grainger-Herr unveiled the Manufakturzentrum: a bold structure of steel, wood and glass (partly designed by Grainger-Herr himself) that is IWC’s new factory home in Merishausen. Bringing together the making of movement parts and cases, and assembly operations for the first time, the new factory is a symbol for a prosperous future. Design, marketing and administration will stay put in Jones’ original Schaffhausen building, but for production purposes, time had run out on the old premises.

Why the need for 8400 tons of concrete, 3300 square metres of glass and 42 million Swiss francs on the new production facility? Efficiency? Tick. Sustainability? Tick. Brand aesthetic? Tick. But of course with IWC, what follows the tick is always a bit of tock. The influence of architectural modernism seen in the abundance of glass across the facility adds a layer of transparency to the company that goes much further than simply letting in a bit of extra natural light. Grainger-Herr made it clear that IWC wants to have its admirers engage with all aspects of the company. Manufakturzentrum reflects a commitment to openness which starts at the production floor and extends all the way to the wrist.

The cogs have now been grinding at IWC for 150 years and what the Jubilee Collection proves is that with a bit of manual winding from innovative leadership, they will continue to do so for many years to come. 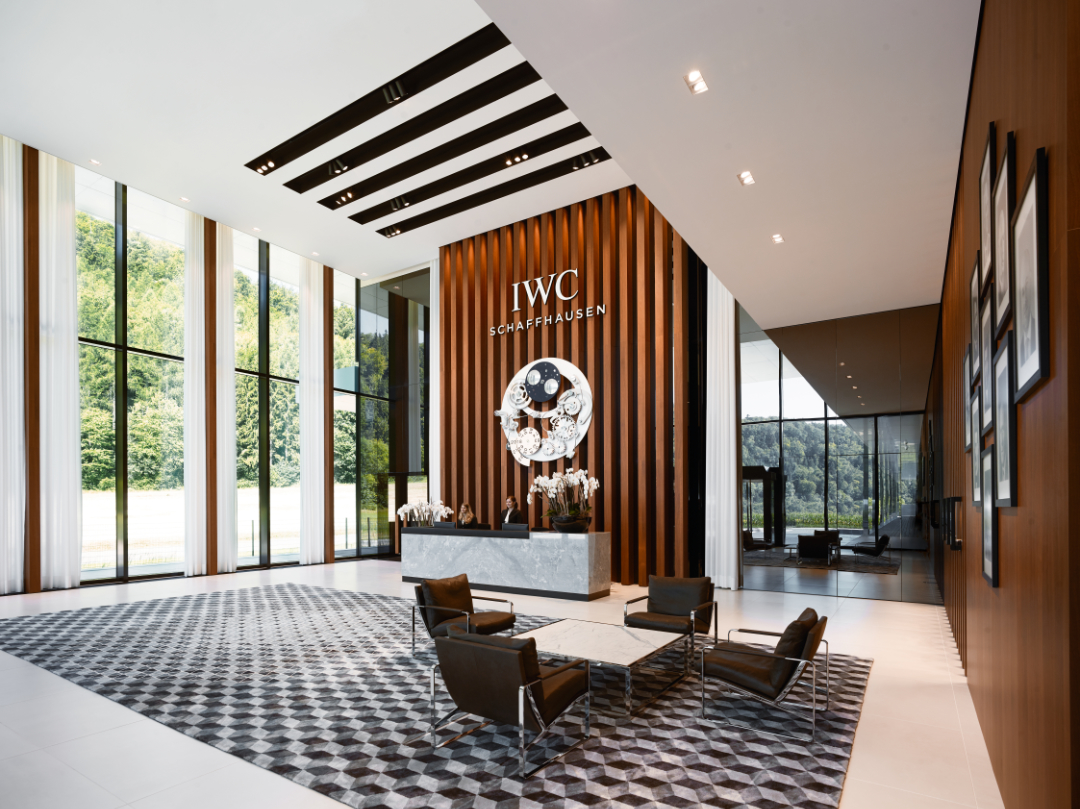