The typical watch has a circular dial, centre-mounted hands and a right-hand crown to adjust the time. Urwerk on the other hand is far from typical. For 20 years now, the Swiss-based independent watch maker has been releasing watches that look and function like nothing else on the market.

Felix Baumgartner and Martin Frei – the duo behind Urwerk – are renowned in the industry for rethinking how to communicate time. Their creations force people to look at time differently; showing us there’s an alternative way than what we’ve had ingrained in us since childhood.

Urwerk have continued to challenge our preconceptions of time with the release of the UR-111C TT –  a new variation of the UR-111C. Originally designed in the style of a driving watch, this configuration allows the wearer to glance at the time without having to take their hands off the steering wheel. First launched in stainless steel, and later black-PVD; this newest variation draws on the previous two, and features a black-PVD body, flanking a stainless steel centre.

Ultramodern and industrial, with subtle nods to Streamline Moderne (an variation of Art Deco), the UR-111C TT is a direct descendant of the Urwerk UR-CC1 “King Cobra”, which (and this is where the history gets more interesting) in turn takes inspiration from a highly unusual Patek Philippe from 1958.

The watch by Patek Philippe was a prototype piece named Cobra, designed by Louis Cottier to be the first ever wristwatch with a linear time display. The Patek Philippe Cobra never went into production; possibly due to the technical challenges in manufacturing the movement. However, it did inspire Urwerk to take up the challenge of making a watch with such a display, half a century later. The ‘CC’ in ‘Urwerk UR-CC1’ name stands for Cottier Cobra, a fitting homage to the ambition of the original designer.

Reading from left to right, the UR-111C TT features a cone-shaped display for jumping hours, a central barrel that rotates to show linear minutes, and a right-hand cone display for digital minutes. There is also a designated aperture displaying the running seconds and an innovative cylindrical roller, that both winds and sets the watch. 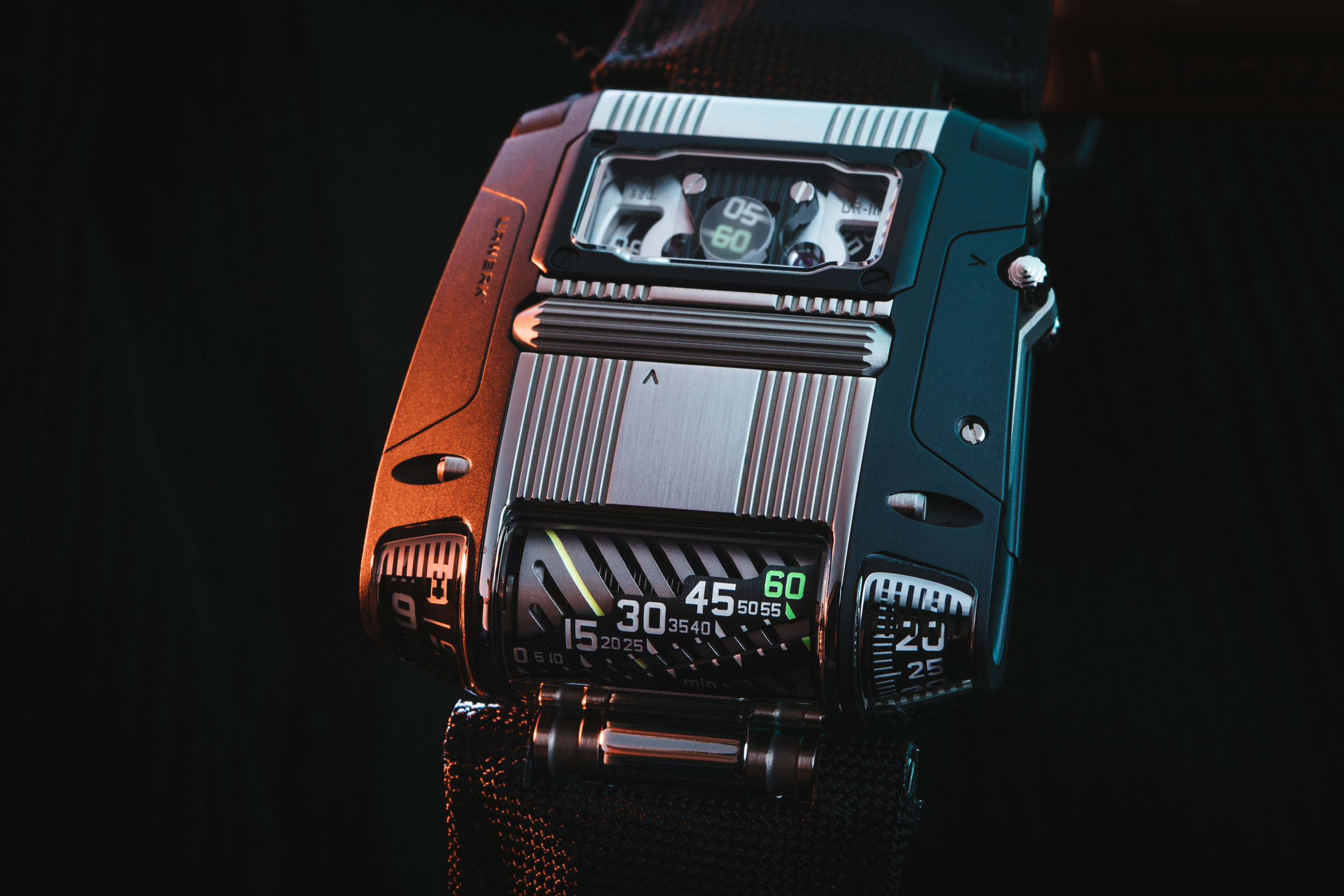 Despite an aesthetic that takes inspiration from the past, the UR-111C TT has its feet firmly planted in the future, with brightly contrasting numerals, case finishing and a utilitarian strap that communicates a very Blade Runner-esque aesthetic.

The futuristic design complements the innovative materials used: including the first-ever watchmaking use of a fused optical fibre image conduit, that acts to magnify the seconds display in the place of a more traditional “Cyclops” lens. A hi-tech solution to an old watchmaking problem – something Urwerk has built their name on.