Behind the Iconic Max Bill Watch

For German watch manufacturer Junghans, there is inarguably no other movement as influential on its designs as Bauhaus. So, it only seems fitting that the company should celebrate 100 years of Bauhaus with a new line of watches that incorporate the design philosophy to its fullest extent. There are two 100 Jahre Bauhaus watches in the collection, each bearing several hallmarks of the Bauhaus aesthetic: the Max Bill Automatic and the Max Bill Chronoscope. There’s no better way to describe these watches than as perfectly minimal. They’re distinctly restrained, elegant yet elementary. They draw on a rich history of Bauhaus design, incorporating many physical and philosophical elements of its 100-year-old past.

The clue to the new watches’ origins lies in their names, which include one of the Bauhaus movement’s most important figures. Max Bill was a Swiss designer who worked with Junghans and conceived some of its most eminent creations, including the iconic Kitchen Clock with Timer and a watch range launched in 1961. Bill championed Bauhaus because it underpinned his formative years; he was once a student at the Staatliches Bauhaus, a German art school where the design approach originated.

Founded in 1919 by German architect Walter Gropius in the city of Weimar, the Staatliches Bauhaus (more commonly known as ‘Bauhaus’, meaning “construction house”) was a centre for crafts and fine arts that combined the two disciplines and taught students to master both. The Staatliches Bauhaus held the view that functionality came before form, and that the fundamental purpose of an item should be its usefulness; its appearance secondary. Thus, design was at the core of the school’s curriculum, but art was a natural by-product. The thinking was that by merging art and craftsmanship, the school could bridge the gap between the two fields and remove the class divide between artists and artisans. In the Staatliches Bauhaus’ manifesto, Gropius wrote:

“So let us, therefore, create a new guild of craftsmen, free of the divisive class pretensions that endeavoured to raise a prideful barrier between craftsmen and artists! Let us strive for, conceive and create the new building of the future that will unite every discipline, architecture and sculpture and painting, and which will one day rise heavenwards from the million hands of craftsmen as a clear symbol of a new belief to come.”

The Staatliches Bauhaus covered architecture, interior design, sculpture, painting, textiles, pottery, graphic design and other specialities, with the intention to unite several branches of the arts at one school. Students studied materials, colour theory and Bauhaus philosophy, before moving on to metalwork, typography, cabinet-making, painting, weaving, and even music, dance and gymnastics. The school garnered some of the top artists, designers and thought-leaders at the time as teachers, including Wassily Kandinsky, Marcel Breuer, Paul Klee, Marianne Brandt, Lyonel Feininger and Georg Muche.

In 1925, the school relocated to Dessau, and in 1932 it moved again to Berlin. Over that time, the school was housed in three different buildings that have since become Bauhaus icons in their own right. In particular, the Dessau campus, designed by Gropius himself, is a beacon of Bauhaus design: steel-frame construction, heavy use of bold grey concrete and brick, and striking glass curtain walls that wrap around the building’s exterior. Max Bill was also thoroughly impressed by the building’s magnitude, describing it as “something never seen before: white walls and huge dark glass façades with the student residence at the forefront and the balcony doors accentuated in red lead.”

The Staatliches Bauhaus was closed by Nazis in 1933, after suspicion that it was breeding pro-Communist thinking (specifically, the Gestapo raided the school to search for a secret printing press thought to be publishing anti-Nazi propaganda). Due to the turmoil caused by World War II, many of the school’s professors emigrated to the United States. Here, they spread the Bauhaus doctrine to a wider audience, generating an entire outlook that became heavily influential for many decades to come. Today, Bauhaus design is evident across all of the fields taught by the school, and it retains an absolutely modern look despite its historical roots. 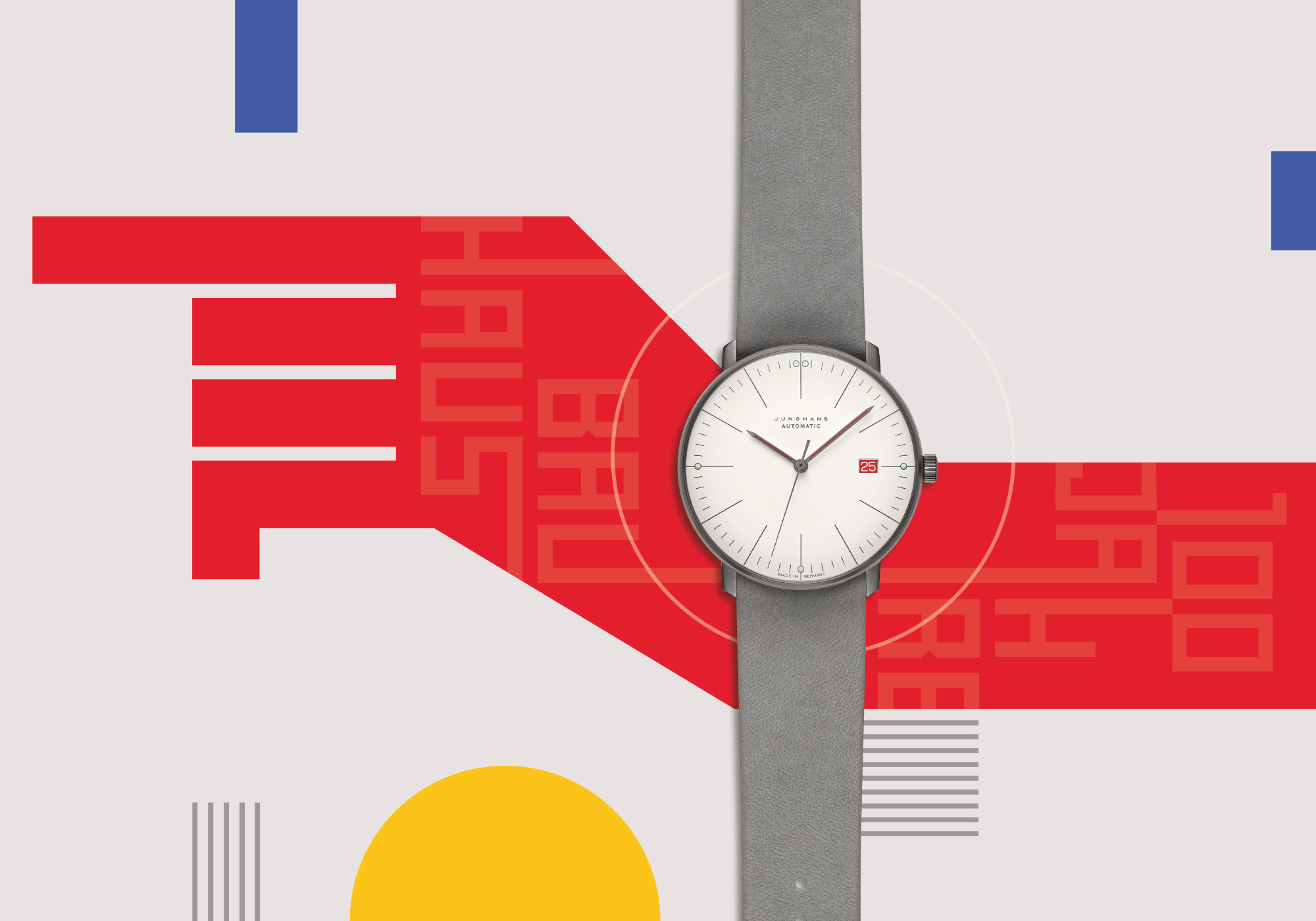 As such, Junghans has adopted the Bauhaus philosophy as the driving force behind its designs. In the manufacturer’s own words, “To ensure a perfect end product, creative and design processes go hand in hand.” It makes perfect sense, then, that the 100 Jahre Bauhaus watches embody the Bauhaus aesthetic, particularly around the celebrated Dessau campus. On the Max Bill Automatic, the white walls of the building are reflected in the watch’s matte silver dial, and the grey strap commemorates the concrete construction. The hands and date window mimic the distinct red doors that Bill so famously admired. The watch is limited to just 1,000 pieces. On the whole, the Max Bill Chronoscope is a little more subdued in its interpretation of the Dessau campus, but similarly uses red accents on the date window. Presented in white gold, the Chronoscope is limited to only 100 pieces.

Junghans’ means of honouring 100 years of Bauhaus feels very fitting, with two watches that admirably marry form and function – there’s little doubt that the forefathers of Bauhaus would have wholly approved of these contemporary iterations. The watches are proof of the durability of Bauhaus design; they’re as appropriate now as they would have been in 1919, and their timeless appeal means they’ll carry their look well into the future. As such an everlasting force in the world of art and design, this certainly won’t be Bauhaus’ last milestone celebration.

Who Was Max Bill, Designer Extraordinaire?

Vintage Watches: Often Not An Ideal Purchase Choice For Novices