The MB&F story, when viewed through the lens of its Machines, is a journey through the culture of modern independent horology. When viewed through the lens of its Engines, it is a map that charts the parallel rise of watchmaking technology itself. In the 17 years between 2005 and 2022, MB&F released 20 exceptional calibres, a rate of production unmatched by any other comparable brand. Discover all of the calibres and track the evolution of MB&F Machines at the new ‘20 Calibres in 17 Years’ exhibition taking place until December 7th at the newly opened MB&F Lab, Singapore.

This is exactly what MB&F did, starting in 2007 with the HM1 engine. Over a period of 17 years, 20 calibres were created, the latest being 2022’s LM Sequential EVO. Initially working closely with external watchmakers, the first Friends in MB&F (Maximilian Büsser and Friends) vernacular, production metamorphosed into a predominantly in-house process, with the first fully internalised movement being 2014’s LM101 engine.

Visit our retrospective at MB&F Lab until 7th December and trace back MB&F journey:

Until now, the MB&F story has mostly been told in terms of the actual Machines themselves — Horological Machine N°1 (2007) that debuted Max Büsser’s new vision of watchmaking, Horological Machine N° 3 (2009) that cemented the brand’s reputation for design audacity, Legacy Machine N°1 (2011) that opened the next frontier of horological expression at the brand, or Legacy Machine Perpetual (2015) that rewrote the book on calendar watches. But what follows is not the MB&F story as you know it — because the Engines have their own voice.

From ignition to takeoff

Each of the various external watchmakers behind MB&F’s movements brought something different to the table. Viewed as a whole, these differences provide a second perspective on the story of the brand — an alternate dimension of mechanical interconnectivity that illuminates another side of the Machines. In context of the wider discourse about MB&F, it takes a certain capacity for analytical thought and horological understanding to perceive this dimension.

Horological Machine N°1 and Horological Machine N°4 may look nothing alike to a casual observer, or even a relatively experienced watch enthusiast. Knowing that both HM1 and HM4 engines were conceived by Laurent Besse, knowing that both these projects are considered by Max Büsser the biggest professional and financial risks he ever undertook at MB&F, brings out a previously hidden aspect of the MB&F Machines. So does the connection between HM2 and HM3, whose engines were signed by Jean-Marc Wiederrecht, and whose consecutive impact on the international watch community established the significance of MB&F in modern avant-garde horology. Think about how the hat-trick of LM1, HM5 and LM2 by Jean-François Mojon anchored the brand’s narrative continuity from 2011 to 2013 as MB&F embarked on the potentially destabilising new Legacy Machine collection. Or how Stephen McDonnell’s untrammelled engineering prowess fuelled LM Perpetual and LM Sequential EVO, MB&F’s two most mechanically innovative creations.

There is also the spiritual patrimony that links otherwise disparate developments. A prime example is the existential debt owed by HM6 to HM4, with the success of the latter setting the foundation for another such audacious foray. Or the technical inheritance that traverses the line between Horological Machine and Legacy Machine, such as the acquisition of savoir-faire in vertically oriented tourbillon construction that passed from HM7 to LM FlyingT. Not to mention the groundbreaking split escapement that originated with LM Perpetual, took centre stage in LM SE and then made its latest appearance in HM10. 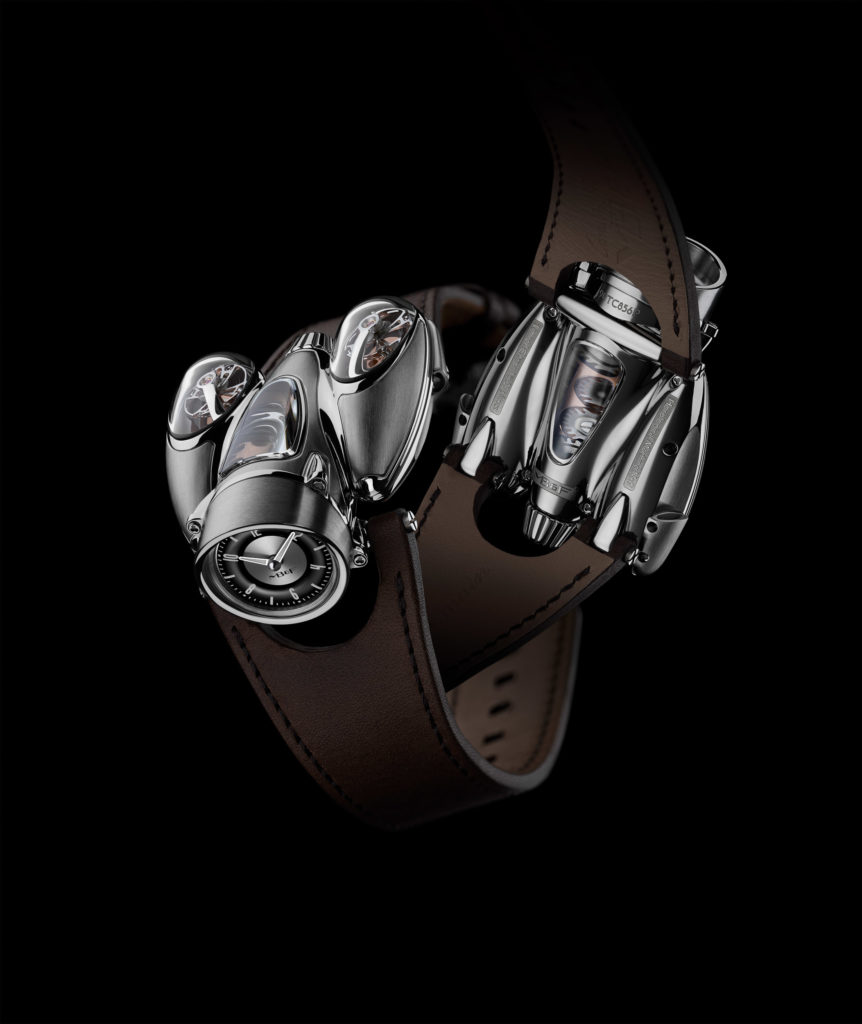 From zero to twenty

The first MB&F Engine, designed in the shape of an infinity symbol, the conjunction of two spheres (Maximilian Büsser and the Friends of MB&F), which later also came to represent the near-infinite odds that MB&F had to overcome in order to bring its disruptive vision of watchmaking to the world.

The highly anticipated follow-up to HM1, setting the precedent that each new Machine would have, in addition to its specific design, its own dedicated Engine. Due to its unconventional form, HM2 Sapphire Vision pushed the envelope in terms of machining sapphire crystal, the first of many MB&F Machines to do so.

Signaling MB&F’s ability to make continually surprising and innovative timepieces, HM3 quickly became a favourite of collectors, and is the most reinterpreted Machine and Engine of MB&F. The “Frog” variation of HM3 further extended the known limits of sapphire crystal machining in order to achieve the transparent domes needed for the Frog’s “eyes”.

A return to working with Laurent Besse, the movement engineer behind HM1. For the first time, an MB&F Engine incorporated time displays set perpendicular to the movement, a technique further refined in Machines such as HM6, HM9 and even the angled dials of LM FlyingT and LM Thunderdome. The double-arched sapphire crystal pane at the top of the Machine and tight finishing tolerances once again redefined the existing limits of manufacturing in fine watchmaking.

A new direction for MB&F, LM1 marked the first round Machine and Engine, deliberately constructed to emulate traditional movements in terms of aesthetic form and finish. Jean-François Mojon, a watchmaker of great creativity balanced against a deeply pragmatic industrial career, was enlisted for its design. Artisanal watchmaker Kari Voutilainen defined the high standard of movement finish used here. The first use of the floating escapement and vertical power reserve.

The first use of optical crystals to create the illusory effect that the hour and minute discs were oriented perpendicular instead of parallel to the movement, something physically impossible. The first in the “Automotive” sub-genre of Horological Machines, later including HMX and HM8.

A landmark Engine, being the first movement fully designed and assembled by MB&F. The smallest MB&F Engine, LM101 further distinguished itself by embracing asymmetry in its dial layout, in contrast with the other Machines. Concurrent with the increased prototyping and machining capabilities incorporated within MB&F premises.

The first time MB&F releases two Machines in one year. HM6 also marked the return of the tourbillon to MB&F, with the preceding tourbillon watch being HM1. Manufacturing techniques were advanced in order to machine the small-diameter sapphire-crystal dome and retractable titanium tourbillon shield. Two of the most challenging forms in sapphire crystal ever seen in contemporary watchmaking came in HM6 Sapphire Vision and HM6 Alien Nation, being multi-domed monobloc components.

Commemorating the 10th anniversary of MB&F, which was officially founded in July 2005, HMX was conceived as an accessibly-priced Machine to acknowledge the support of MB&F collectors (known as the “Tribe”) over the years. In-house module on Sellita base.

The second time MB&F releases two Machines in one year, and the first time Stephen McDonnell (who played an instrumental role in bringing HM1 to life) creates an Engine – which includes a technically innovative “mechanical processor” that reprograms existing concepts of perpetual calendar construction. The first appearance of the split escapement, subsequently seen in LM SE and HM10.

The third in-house Engine of MB&F (module on a Girard-Perregaux base), after LM101 and HMX, and yet another automotive-inspired Horological Machine after HM5 and HMX. Linked to HM3 despite the aesthetic dissimilarity, thanks to the use of the common base calibre.

Following LM101, the second fully in-house Engine of MB&F (without an externally-sourced base calibre). Departing from the convention of laterally mapped movements, the HM7 Engine was built on a vertical axis — the horological equivalent of a skyscraper instead of a bungalow. The third tourbillon of MB&F, consolidating the expertise needed to build LM FlyingT (2019) down the line. The HM7 Platinum Red dispensed with hour and minute rings, mounting lume-filled markers directly on the Engine and necessitating additional refinements in assembly technique and energy transmission.

The star turn of the split escapement first seen in LM Perpetual, without any other complication to detract from the purity of this exceptionally challenging component.

A milestone Engine signifying the internal synthesis of two techniques previously used only in externally developed Engines — the perpendicular time display (HM4, HM6) and double escapement system (LM2). Thanks to MB&F’s continuous efforts over the years to expand the possibilities of machining sapphire crystal, the Sapphire Vision variant of HM9 features the most effective and impactful full-sapphire case of MB&F to date.

Mechanical descendant of HM7, with a similar vertical movement construction topped with a flying tourbillon. Also the Machine with the most personal and intimate connection with Max Büsser, inspired by the women in his family, hints of which were built into the Engine: the sun-shaped winding rotor, the column-shaped movement reminiscent of a twirling ballerina on stage, the angled dial…

Discover the collaboration between MB&F and Bvlgari

The fastest rotating escapement in watchmaking of its time, featuring the unique Tri-Ax mechanism combining features of a tourbillon and caroussel. Created by Eric Coudray, pioneer in this extremely esoteric and prestigious type of mechanism. Kari Voutilainen, frequently involved in the finishing standards of Legacy Machines, applies his proprietary brushed finish to the ratchet wheels, the first time he has allowed this secret technique to be used outside of his own timepieces.

A fully in-house Engine and a symbolic reclamation of several mechanical features previously used in externally developed Engines. As seen in HM10, the rotating time-display domes (HM3), vertical power reserve (LM1), and split escapement (LM Perpetual, LM SE) are now completely part of the MB&F in-house horological expertise. Following the technical tour de force of LM Thunderdome and the deeply personal exploration that was LM FlyingT, HM10 was a return to whimsy and fun — grounded by an impeccable movement.

Described as LM1 on steroids, LMX celebrates 10 years of Legacy Machines. It revives the double time display of LM1 and vertical power reserve indication, but with a twist. The two dials are now angled in the style of LM FlyingT and LM Thunderdome, while the vertical power reserve is now a hemisphere that indicates the level of mainspring wind in a 3D display.

The second powerhouse Engine from Stephen McDonnell, and the first MB&F chronograph movement. With the innovative “Twinverter” pusher that operates both chronograph mechanisms in the Engine, LM Sequential EVO is able to measure elapsed time in ways that was not possible before. The internally-jewelled chronograph clutch shafts ensure the calibre suffers no loss in amplitude, whether the chronographs are engaged or not.

In the 17 years between 2005 and 2022, MB&F released 20 exceptional calibres, a rate of production unmatched by any other comparable brand. They say the real measure of a life is not the number of breaths you take, but the number of moments that take your breath away. Max out your Engines. It’s time to recognise what it truly means to create 20 calibres in 17 years. It’s time to take your breath away. Visit our retrospective at MB&F Lab until 7th December!