Our Only Watch 2021 Highlights

Only Watch – 54 brands and collaborations come together for the 9th edition of the iconic charity auction of unique timepieces benefitting research on Duchenne Muscular Dystrophy.

The 53 lots will be auctioned in collaboration with Christie’s, for the third consecutive time, on 6 November 2021, at 2pm (Geneva time), at the Four Seasons Hôtel des Bergues.

Below we highlight our favourites.

The complicated desk clock Ref. 27001M-001 offered by Patek Philippe for the Only Watch 2021 charity auction is inspired by a desk clock delivered to James Ward Packard in 1923. The original model is now preserved in the Patek Philippe Museum. This unique piece is equipped with the new caliber 86-135 PEND IRM Q SE. It features a perpetual calendar, moon phases, week-number display and power-reserve indication (31 days). It is adjusted to a precision rate of -1/+1 second per day. 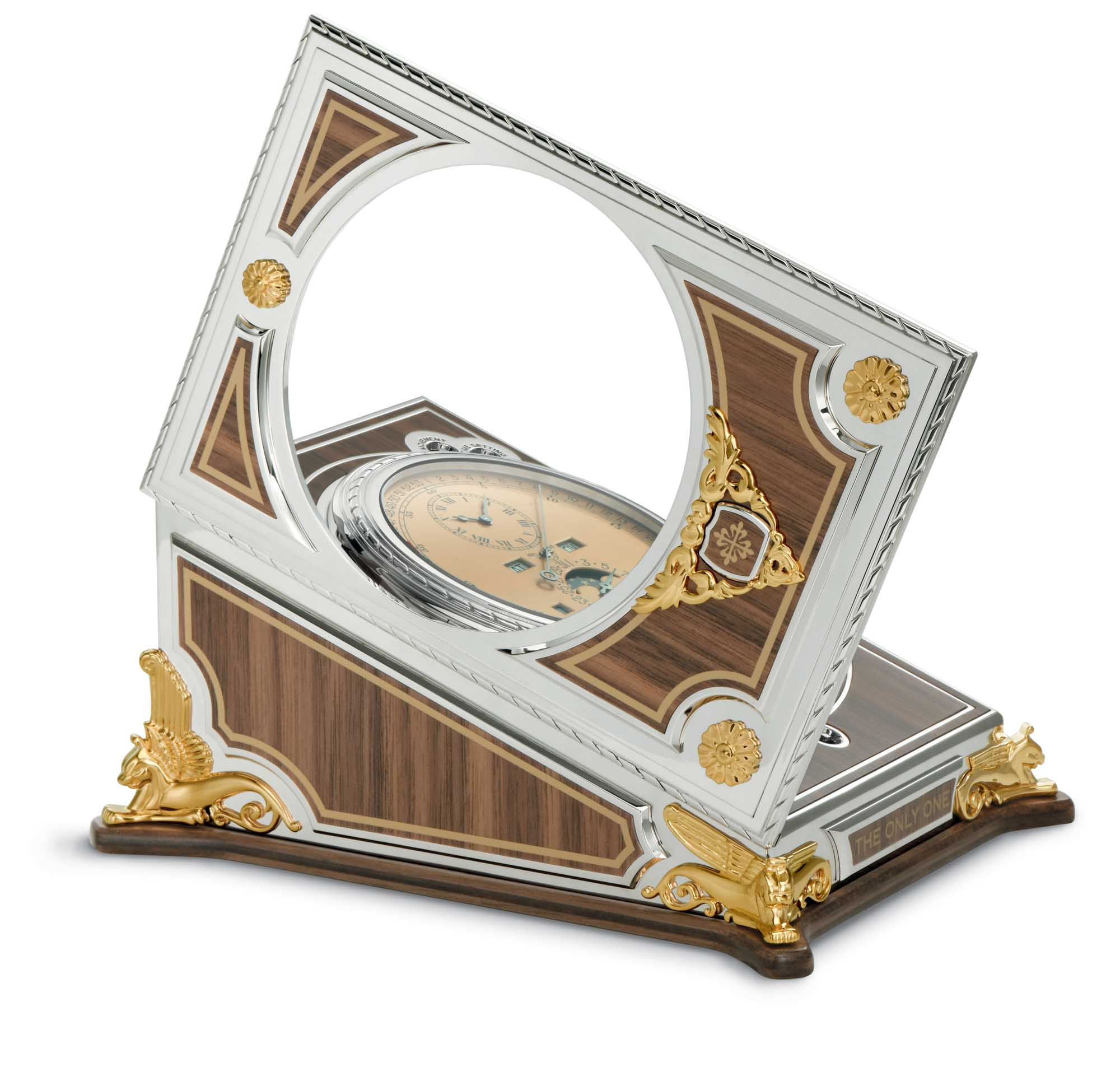 2021 celebrates the 20 years of the automatic Octa Calibre 1300 in all its forms. This latest opus is the ultimate expression. An automaton, working solely off the Octa movement’s mainspring, was no easy task.

The minutes are read by rotating disk at the 12 o’clock position, while the mobile fingers appear or disappear instantaneously to display the hour according to their positions. The fingers are inspired from a mechanical hand created by Ambroise Paré (1509-1590), the father of modern surgery.

“This watch was born in 2012 while having dinner at Francis Ford Coppola’s house in the Napa Valley. “He asked me if it could be possible to tell time with a hand in a watch. I replied that the idea was interesting and required thinking about it. But how to display 12 hours with 5 fingers? It was not an easy matter and this complex challenge inspired and motivated me. Once I figured it out, Francis immediately sent the sketches for the fingers positions.  After more than 2 years, I could finally focus on “Fecit”. After 7 years of development, I am proud to present the FFC prototype”. This dedicated Royal Oak “Jumbo” Extra-Thin is the last unique 15202 and the last unique piece powered by Calibre 2121, the thinnest automatic movement with central rotor and date indication of its time, first introduced on the Royal Oak in 1972. Heralding a new era, the case and bracelet combine sandblasted titanium with polished Bulk Metallic Glass – a first at Audemars Piguet. When cooled rapidly, this palladium-based alloy shares several characteristics with other glasses, including amorphicity, transparency and high strength, making it highly resistant to wear and corrosion. Its non-crystalline nature results in a unique play of light.

While offering new grey hues, the Petite Tapisserie dial has retained the original Royal Oak’s typography for the signature and monogram as introduced in 1972 with the 5402 A series. The original printed denomination “Swiss” has also been kept under the hour-marker at 6 o’clock. The Chronomètre Contemporain’s successor, the Chronomètre Contemporain II (RRCCII), remains focused on chronometric performance – certified by the Besançon observatory – while being elegantly executed to highest possible quality in finishing and construction. Both the dial and movement of the RRCCII retain the distinctive aesthetics of the original, but it was constructed from the ground up as a completely new timepiece. The RRCCII is paradoxically very much the same, yet entirely different.

The dedication to quality means that one element of the RRCCII “Only Watch” remains unchanged. Made up of 14 components, the platinum case has been hand made by the legendary Jean-Pierre Hagmann. Having retired in 2017 after some five decades as an artisanal case maker who supplied the very best brands, Jean-Pierre picked up his tools once again in 2019 to join Akrivia, with his first creation being the case for that year’s RRCC “Only Watch”.  For Only Watch 2021, Jean-Pierre returns for an encore performance, where he carefully fabricated the RRCCII case by hand, including soldering each of the elegantly arched lugs to the case band, one of which bears his “JHP” hallmark.

For Only Watch 2021, TUDOR has created a unique Black Bay GMT with a striking case and bracelet finish that is the result of a secret stainless-steel ageing technique. The MT5652-1U Manufacture Calibre powering this unique watch, capable of keeping track of time in three time zones simultaneously, also received an aesthetic treatment to match the case in style that required the bridges and mainplate to be coated in black before being aged by barrel tumbling. The Black Bay GMT One is a Master Chronometer, one of the industry’s most demanding certified standards, guaranteeing Swiss manufacturing, precision of 5 seconds (0 +5), anti-magnetism to 15’000 gauss, stated water-resistance and stated power-reserve. Achieving this certification required a substantial number of changes to the TUDOR Manufacture calibre and highlights the brand’s technical expertise and know-how. Denis Flageollet: “Kari and I share the blood line of watchmaking know-how passed on by the man who taught us both: Charles Meylan. I am please that we are combining our experience with that of Voutilainen for the beautiful cause represented by Only Watch 2021, and delighted by this moment of sharing.”

HM10’s rounded, compact body lends itself perfectly to the shape of the cuddly panda; the top section is coated in black and white lacquer to mimic the animal’s colouring. To accommodate the lacquer, the top section of the standard titanium case had to be crafted for this Pièce Unique in stainless steel. Other unique features include two black titanium panda ears, added atop the sapphire crystal dome, and a ceramic tail machined from Grade 5 silicon nitride.

Much like the panda’s unmistakable eyes, two black aluminium time-display domes dominate the face of the watch – a nod to the other use of the word ‘panda’ in watchmaking, where white dials with black counters are called panda dials. Other panda bear features include flexible “legs” that wrap firmly around your wrist and panda teeth that are constantly munching on bamboo shoots; the teeth also indicate the power reserve. 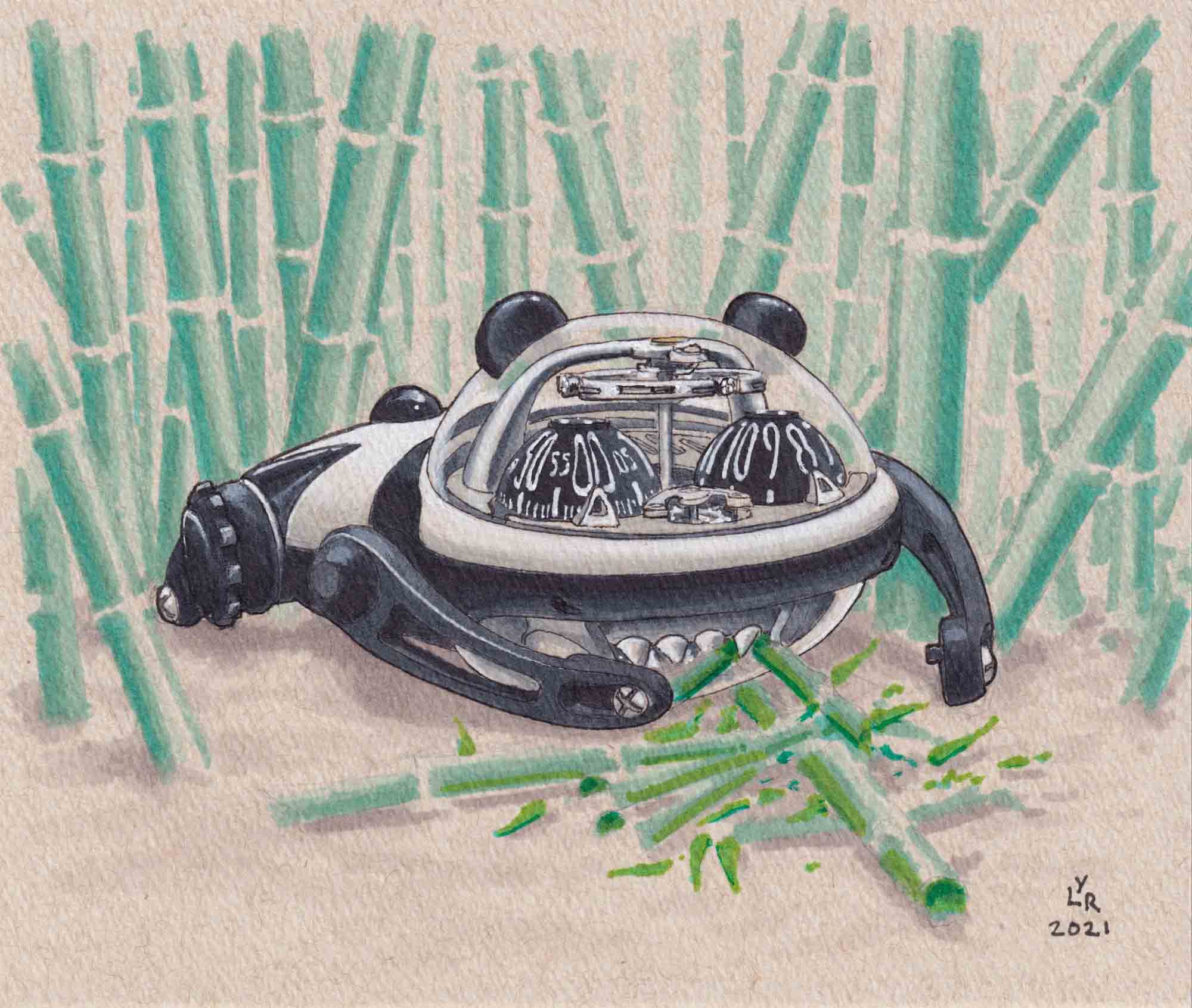 The Hublot Big Bang Tourbillon Only Watch bears the Only Watch 2021 colour codes. A unique piece, in 45 mm, cut in transparent and orange-coloured sapphire, that wears the iconic Big Bang design and showcases the mechanics of the self-winding Tourbillon Manufacture movement.

This exceptional calibre is entirely designed and produced in the Hublot Manufacture, and features a self-winding system ensuring a power reserve of 115 hours. Strengthening the spectacular appearance of the dial and its contemporary design, its micro-rotor is visible on the dial side for a performance that is both spectacular and sophisticated.

Playing the ultimate transparency, by using more sapphire in the movement itself. The Manufacture caliber is equipped with three sapphire bridges – a barrel bridge, an automatic bridge and a Tourbillon barrette.
Available with two interchangeable rubber straps. They complete the cutting-edge look. This UR-102 is unique in many ways. Its full, round shape is seamlessly smooth. Framed by precious platinum, the caseback features an interpretation of the Gaïa prize, a dazzling flight of fancy symbolising URWERK’s unswerving resolve to reach for the stars.

It is an iconic model, jealously safeguarded until now at the heart of the watch Maison, since it marks the beginning of the URWERK adventure in the 1990s. The foundation stone. A watch of almost disconcerting simplicity, with a wandering hour as its only marker of time. The UR-102. This one-of-a-kind model in asphalt-coloured anodised aluminium with a platinum caseback has been newly enhanced with a midnight blue lacquer. As a realised vision representing the bridge between the heritage of TAG Heuer and its quest to constantly innovate, the Only Watch Carbon Monaco is the perfect encapsulation of these two core philosophies. With its extensive use of carbon, from the case and skeletonised dial down to the hairspring, as well as the avant-garde design, showing how disruptive the Monaco is more than 50 years after its introduction, the Only Watch Carbon Monaco looks towards the future.

Underneath the surface, and visible through the largest sapphire case back mounted on a Monaco, the respect that TAG Heuer has for tradition watchmaking is on full display. The unique Heuer 02 calibre, the first to be fitted with a carbon hairspring, is hand-finished using 10 different techniques including a distinctive gratté finish giving the impression of a chequered flag. This is completed by a unique oscillating mass in the form of the TAG Heuer shield which is hand finished and hand painted in the gradient shades of Only Watch 2021.

Ulysse Nardin UFO for Only Watch

This year, the timepiece auctioned by Ulysse Nardin for Only Watch is not a wristwatch but a wacky high-flying clockmaker’s object, a work of art, a piece of design and architecture, a toy, quite simply: the UFO, a table clock ready to welcome you on board for a new entertaining odyssey, in a “unique piece” version with an orange hue.
Indeed, the electric orange palette of Only Watch has sprung out in touches on the Ulysse Nardin UFO! The out-of-the-ordinary object, already venerated by traditional clock lovers and acclaimed when it was released in April 2021, is already sold-out in its metallic blue version of which the house produced only 75 pieces. The UFO is making an energetic return to center stage for the auction patronized by H.R.H. Prince Albert II of Monaco, established by the Monegasque Association against Muscular Dystrophy.

The spherical aluminum base of the clock on which the blown glass dome is secured by a bayonet system, is made orange by a special anodizing surface treatment. The three connecting cylinders and the three lower ties of the movement have also been colored orange. The power reserve disk, the decorative insert with the Ulysse Nardin emblem – the anchor – also colored orange. The three dials also painted, but with a mat appearance unlike the other metallic orange elements.

A unique piece, exclusively produced for the occasion, it will be auctioned in November 2021. Its pop details remind us that the orange color is stimulating and full of joy. A call to the nonchalance of sunny days. As if illuminated, energized and sunlit, the UFO sways in the most refined way. So, with this orange version, this is a golden opportunity to acquire a unique original of this art object. 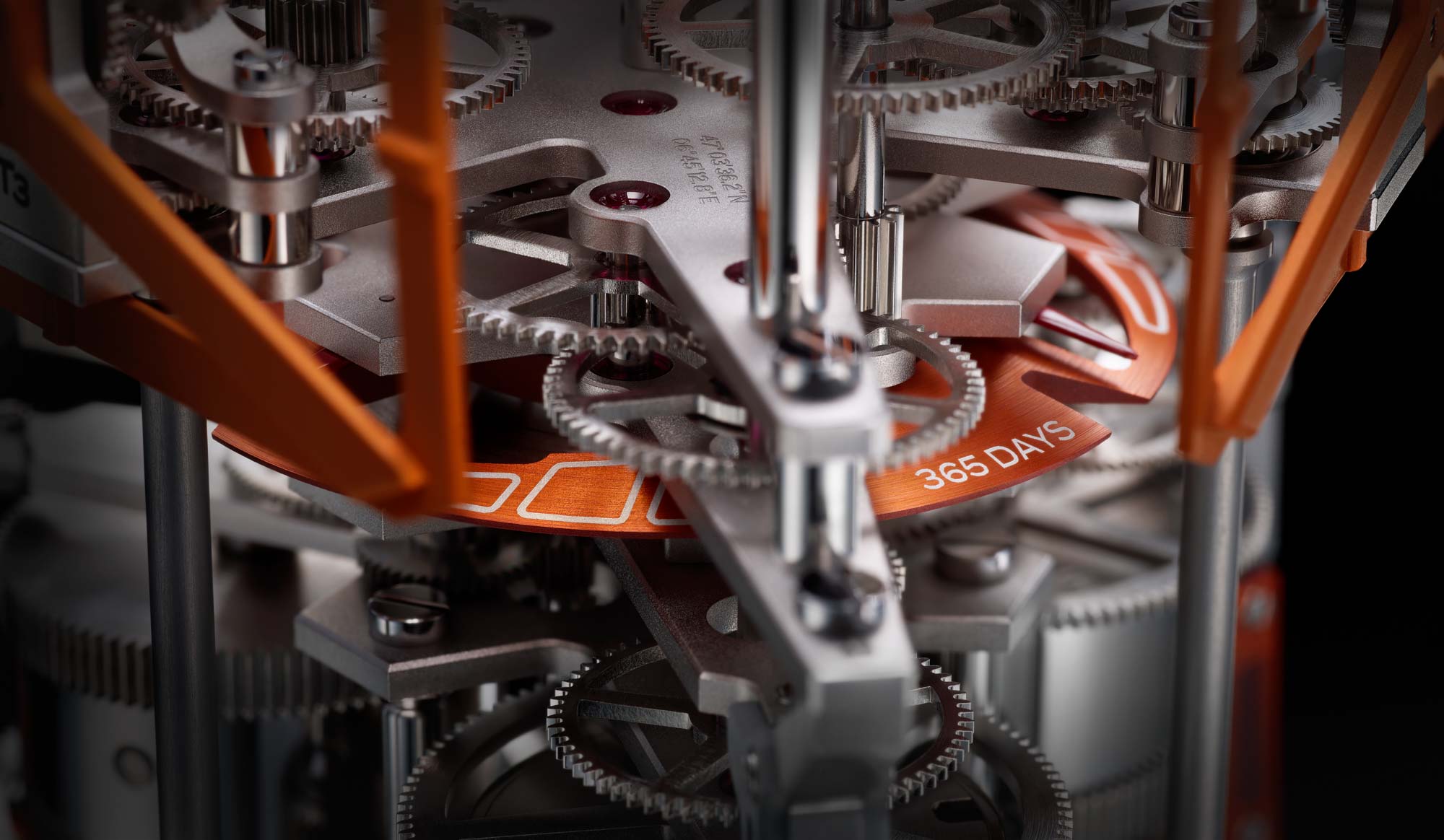 Girard-Perregaux, a loyal supporter of Only Watch, has dedicated a unique piece for the now-legendary biennial auction. The Manufacture, currently celebrating its 230th anniversary, has reimagined a 70s icon, the ground-breaking Casquette. Created in partnership with Bamford Watch Department, the Casquette Only Watch revisits the original but adds a notably modern twist. 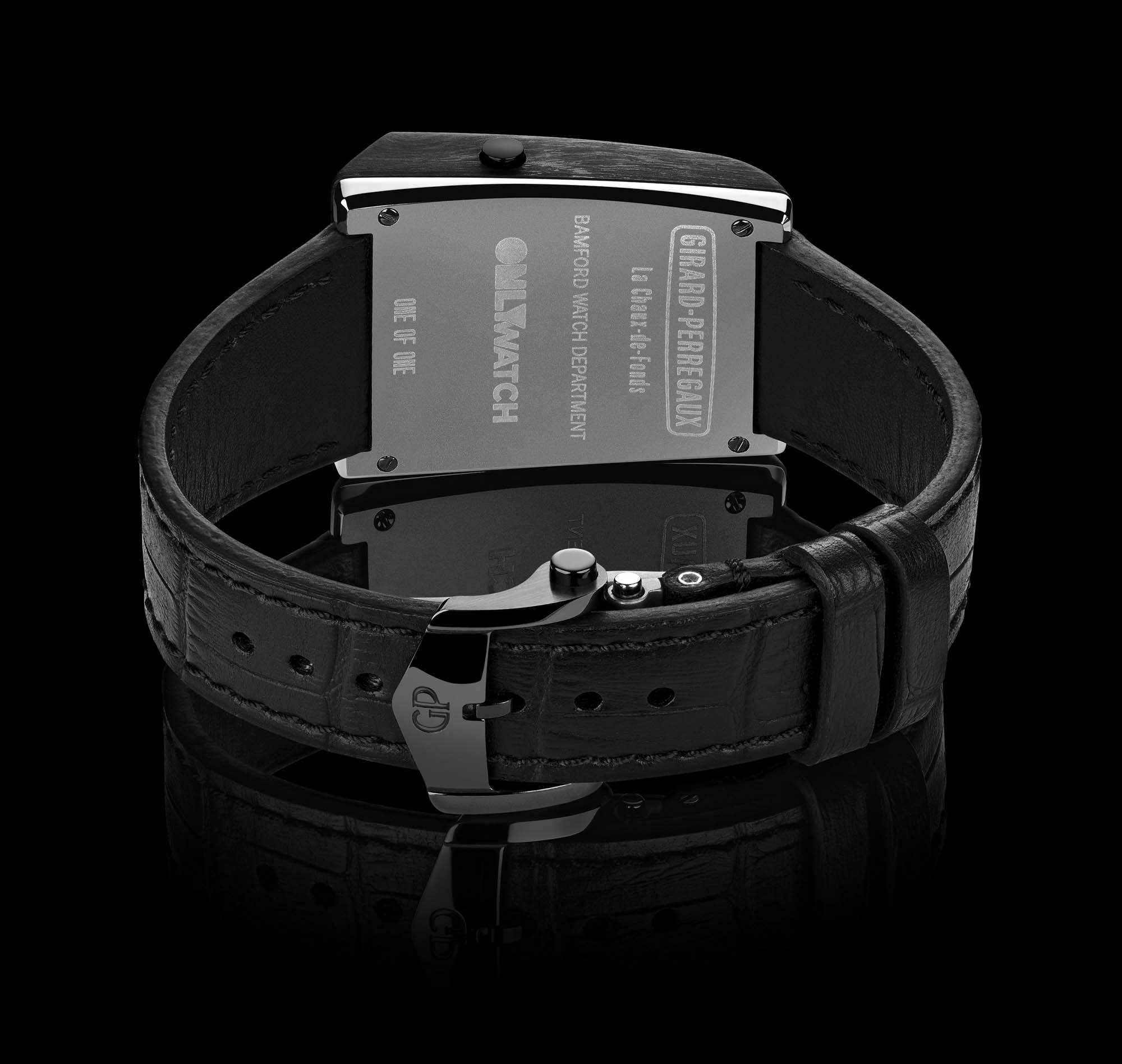