The IWC Spitfire Takes Off for The Longest Flight

An hour and a half outside of London, Goodwood Aerodrome sits quietly amongst the green fields of the West Sussex countryside. Goodwood played an important role in training Spitfire pilots during the Second World War, though since then it has become better known for its flight school and race track. Tonight, however, a remarkable journey will take off from its runway: Steve Boultbee-Brooks and Matt Jones hope to make history on their round-the-world trip in an old Spitfire, and IWC will be with them the whole way.

International air travel is such a normal part of our world today that we hardly stop to think about how incredible the act of flying really is – globally minded airlines have made it all too easy to take to the sky! Except flying an iconic aircraft like a Spitfire is a different matter entirely. These fighter planes were made for short-range, high-performance air combat and certainly not for the long-haul 43,000 km that Boultbee-Brooks and Jones expect to fly on their journey. The Spitfire has a range of only 750 km which means that the flight has to be broken up into over 100 separate legs so that the plane can refuel and the pilots can rest  – this, of course, makes the journey all the more exciting. Having taken off today from the British soil of Goodwood, the pair are now heading in the direction of the Atlantic Ocean to land in New York by the middle of the month. From there, Boston, Los Angeles, Fallon and Vancouver will provide the North American stops before they land in Tokyo by way of Alaska and Russia. From the Japanese capital the Spitfire will make its way to Seoul, Chengdu and Deli before reaching the Middle East in Abu Dhabi. Flying back over the European continent they will make stops in Milan, Dübendorf, Paris, Amsterdam before finally returning to Goodwood (hopefully around December). The journey is not only an extraordinary undertaking because it has never achieved in an aircraft such as the Spitfire, but it also poses an enormous logical hurdle.

The aircraft itself has been meticulously and lovingly restored to its charming original 1943 self. Many working Spitfires today are reconstructed from the parts of several aircrafts, but this one was an entire aeroplane which was acquired at auction by the piloting pair about a decade ago. Fourteen specialists worked on the plane over several years, stripping it down to its individual parts and rebuilding it to be polished in a shining chrome finish – usually the body would be painted, but the chrome will make its much-admired form all the more visible. 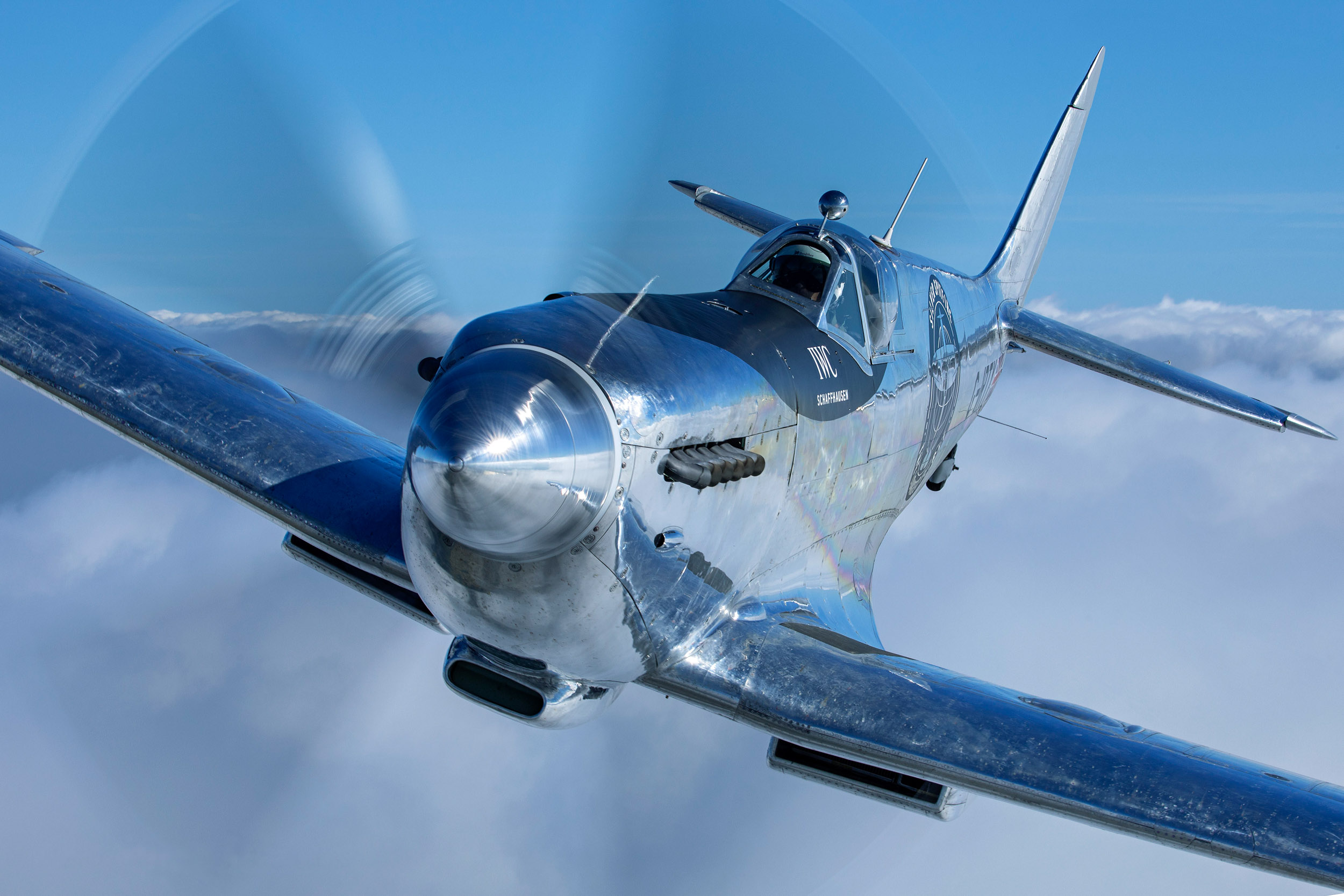 The pioneering design and innovative engineering of the Spitfire has rendered the aircraft an icon of early 20th-century aviation. Indeed, the extraordinary significance of the aircraft is well understood by the two men whose idea it was to embark on this remarkable adventure. The Boultbee Flight Academy was established in Goodwood as the world’s first non-military Spitfire training school – it operates above all else as a product of the immense passion which the two pilots share for all that the Spitfire represents. The Longest Flight is therefore a fitting homage to that passion, and one which will bring the story of the Spitfire to parts of the world which have never seen anything like it before.

A World Timer to Celebrate

Given that IWC is a key sponsor behind the journey, it seems only natural that a watch was made specifically for the flight. The Pilot’s Watch Timezoner Spitfire Edition for ‘The Longest Flight’ is a formidable and relentlessly functional timepiece. A 46 mm diameter and 15.6 mm height may sound like imposing sizes for many wrists, but there is a lot to find inside these sturdy dimensions. An automatic, stainless steel pilot’s watch with a date aperture and oversized crown sounds distinctly Schaffhausen, yet there is much more going on.

Perhaps the most striking feature is the timezone city ring on the black ceramic bezel. Pushing down on the bezel and rotating it engages the jumping hour of the world time function, making the transition from London to Los Angeles or Beijing to Bangkok all the easier. The in-house Calibre 82760 movement is a source of great pride for IWC and, aside from providing a world time feature, it also keeps a corresponding 24-hour display and classic 3-hand time display ticking. Pellaton winding, a 60-hour power reserve, air pressure resistance and anti-reflective sapphire glass combine to present a watch with all the reliability a Spitfire pilot could possibly ask for. 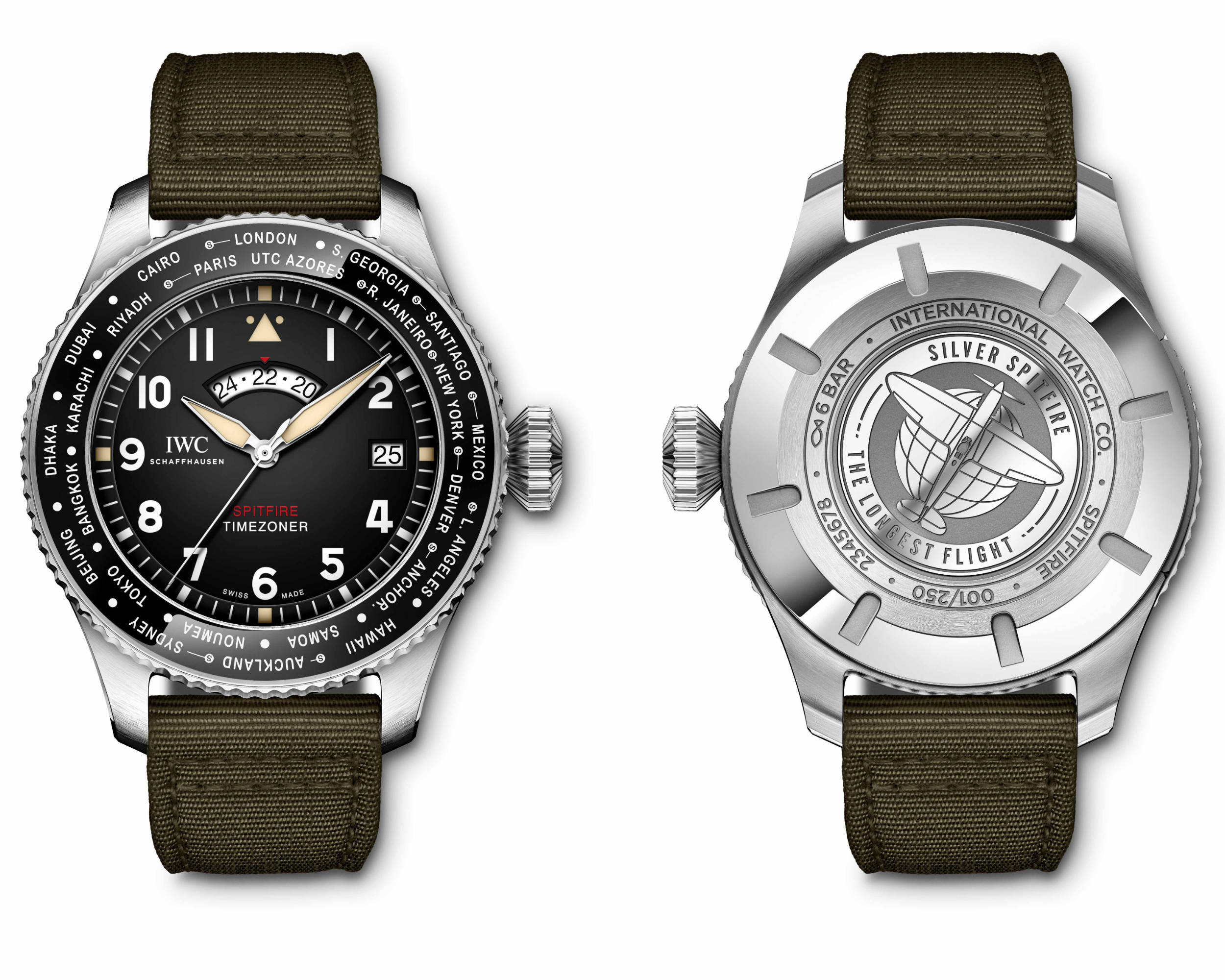 Aesthetically, the watch effortlessly achieves that early 20th-century sentimentality of the Spitfire aircraft with its contrasting colour scheme: the sand coloured hands and indexes along with the bold white Arabic numerals and city names stand out prominently (and legibly) against the blacked out dial and bezel. The accompanying green textile strap adds another tasteful nod to aviation stylistic traditions. The Timezoner Spitfire Edition is a watch that any pilot would be proud to own for its functionality, its purposeful design, and its ability to embody and make tangible the adventurous spirit of flight. 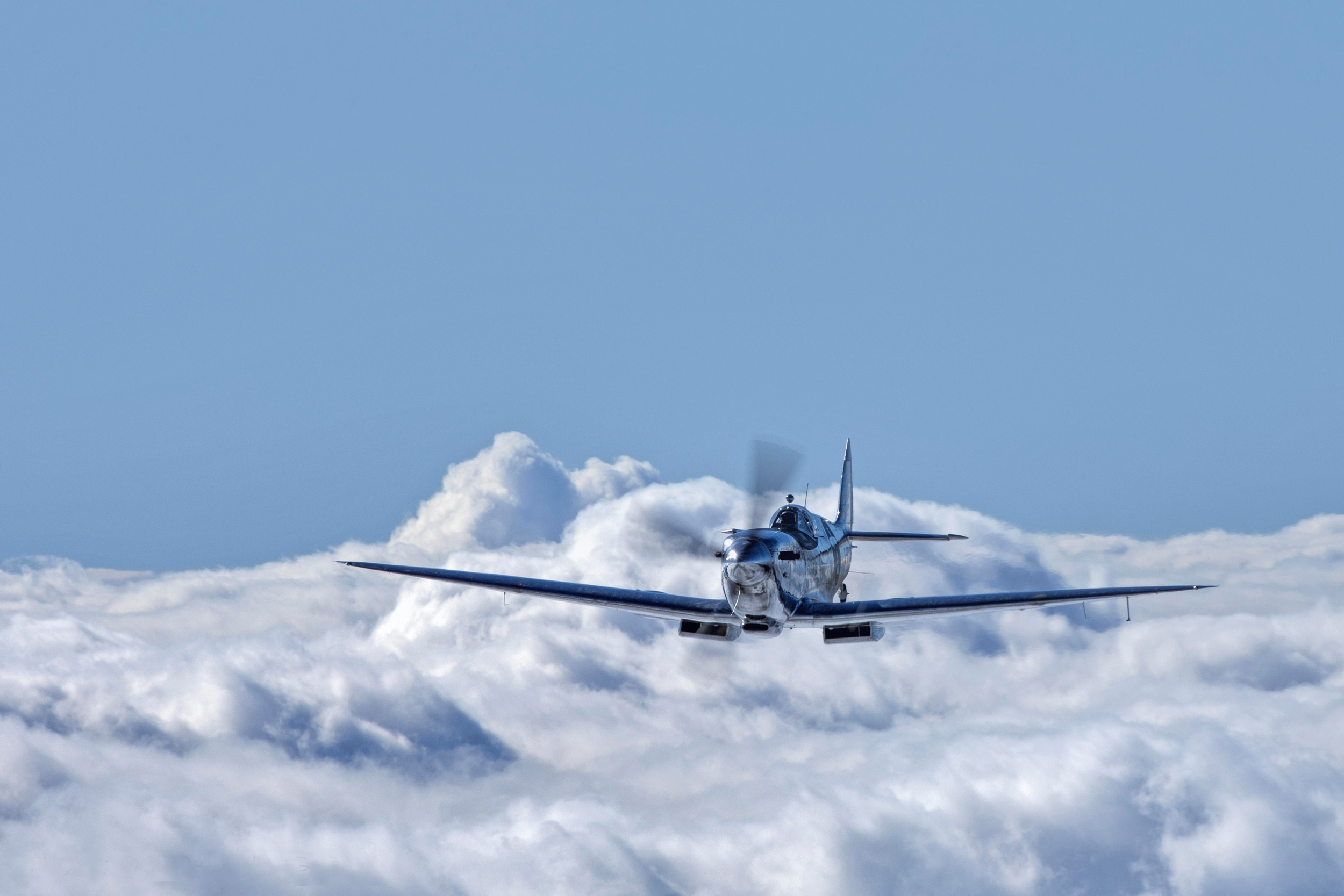 ‘The Longest Flight’ is an event that is truly exciting for watch lovers and aviation enthusiasts alike. Throughout its illustrious watchmaking history,  IWC has forged a mighty relationship with the skies and those who take to them with a pair of wings. A daring and ambitious air-borne initiative in an iconic fighter plane paired with a specially designed, globally-minded watch to mark the event is quite simply a brilliant combination. Having departed from Goodwood today, we wish pilots Boultbee-Brooks and Jones all the very best for their grand aerial expedition – and safe flying!

The IWC Spitfire Takes Off for The Longest Flight