Ulysse Nardin is one of the few vertically integrated watch manufactures that is also now independently owned. Its rich history spans over 175 years, with the spirit of freedom and innovation remaining at the heart of the manufacture. We look at the newest creations from Ulysse Nardin, aptly named Vertical Odyssey Mission 2. 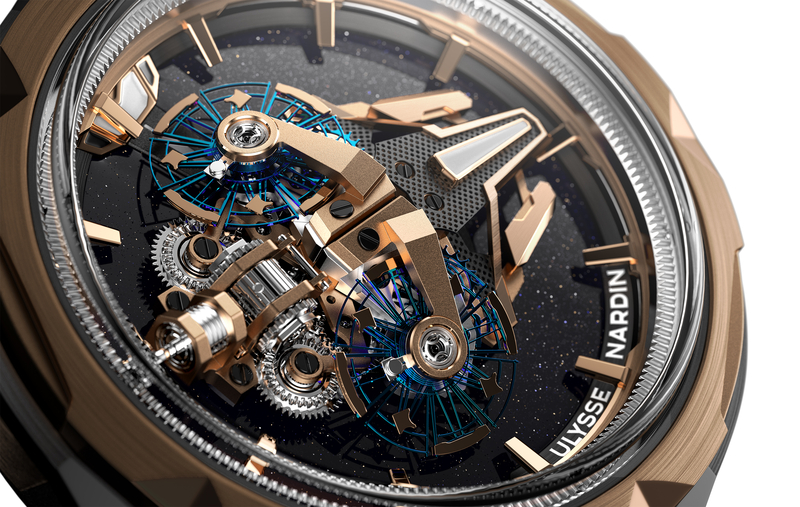 In 2001, Ulysse Nardin shocked the watch world with the release of the Freak. Developed by Dr Ludwig Oechslin, the revolutionary creation put the movement centre-stage and used its components (not hands) to indicate time. This year, Ulysse Nardin has taken this notion to another technological level. 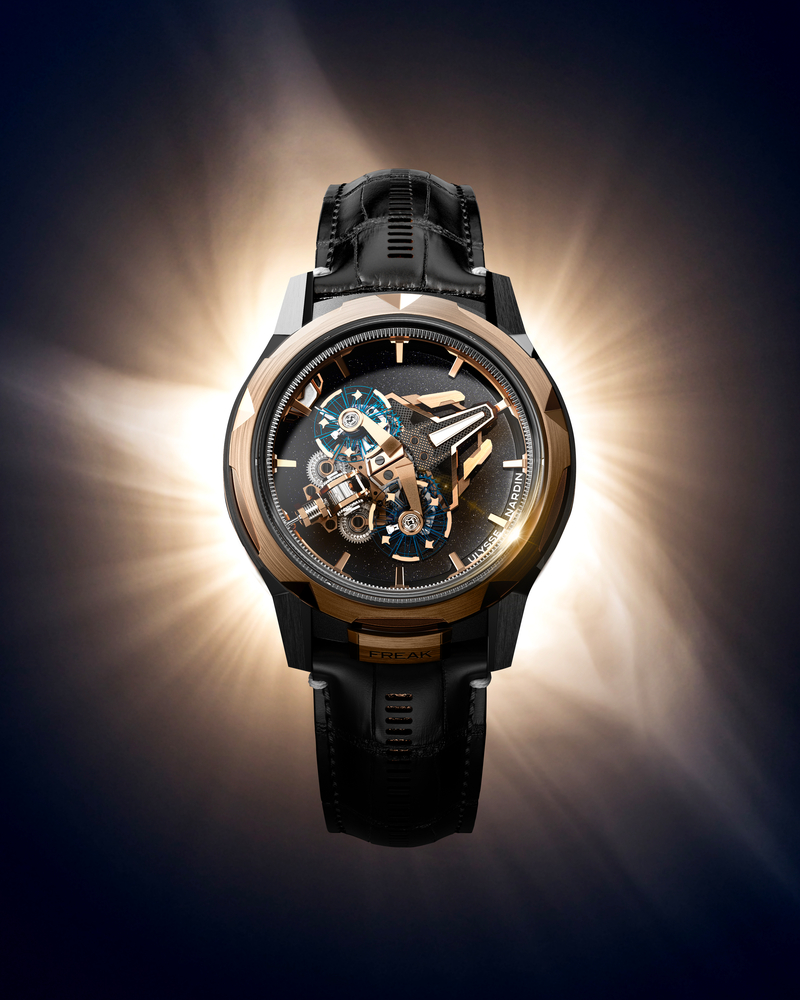 The new Freak S features Ulysse Nardin’s first double oscillator, a signature of the new UN-251 manufacture movement. The two XXL silicium balance-wheels with inertia-blocks, inclined at 20˚ from one another, are linked by a differential. By drawing the average of their rates, the differential compensates the dual oscillator to ensure greater stability and precision in timekeeping.

Ulysse Nardin showcases a new surface treatment in the Freak S. Patented in 2009, DiamonSIL is a combination of silicium and synthetic diamond. The silicium components of the escapement in the Freak S is coated with a layer of artificial diamond to optimize its performance and resistance to the abrasion that results from the several million impacts per year on the watch.

The new “Grinder” automatic winding system, first featured in the Freak Vision, is also substantially improved. The oscillating weight is connected to a frame carrying four blades, resulting in energy transmission that is twice as efficient as that of existing systems.

Set against a black aventurine dial, the Freak S is a masterfully executed rocket for the wrist. Limited Edition of 75 pieces. 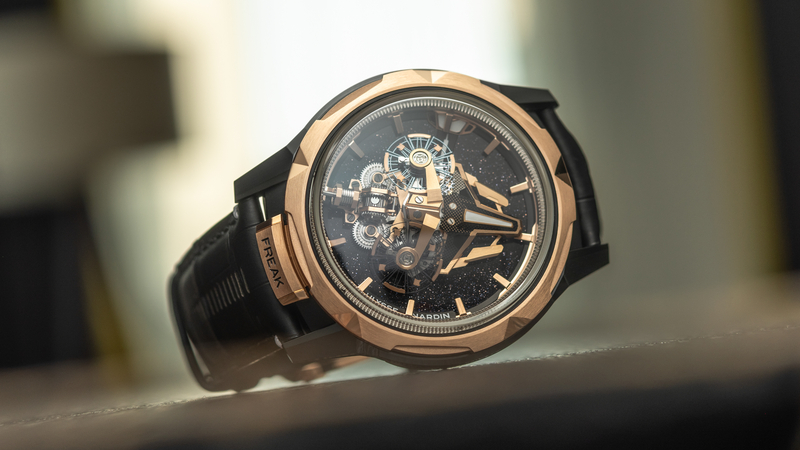 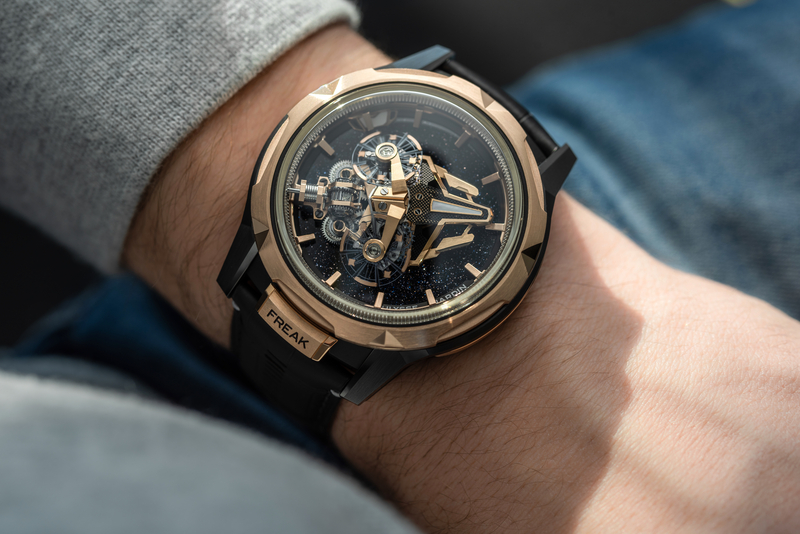 The latest addition to the Freak X family features a new aventurine dial as the backdrop for its manufacture UN-230 movement. The speckled blue glass dial, reminiscent of scintillating stars in the night sky reflected by the dark sea, beckons one to adventure. 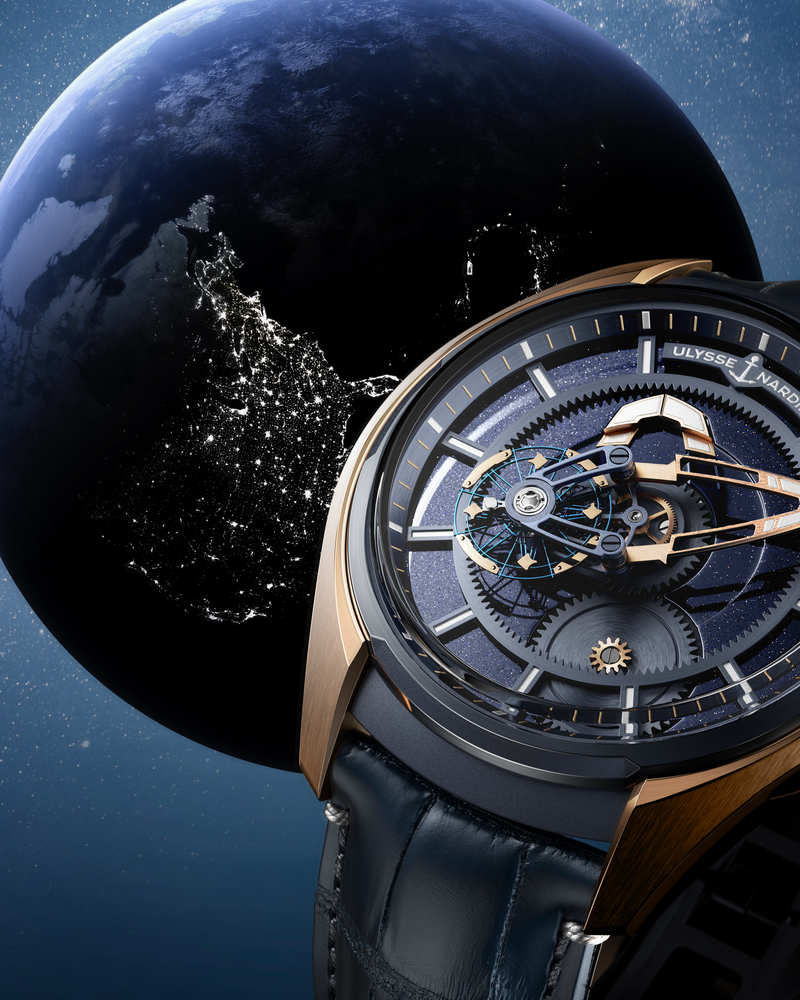 First introduced in 2019, the Freak X family retains the spirit of the original Freak with no hands but is fitted with a winding crown. The central bridge, with the flying carrousel movement that rotates around its own axis once every hour, acts as a minute hand, and one of the wheels indicating the hours. Like the rest of the Freak family, the balance wheel, escape wheel, and anchor are made from silicium. The balance wheel also has nickel inertia-blocks and oscillates at 3Hz. The movement has a robust power reserve of 72 hours. 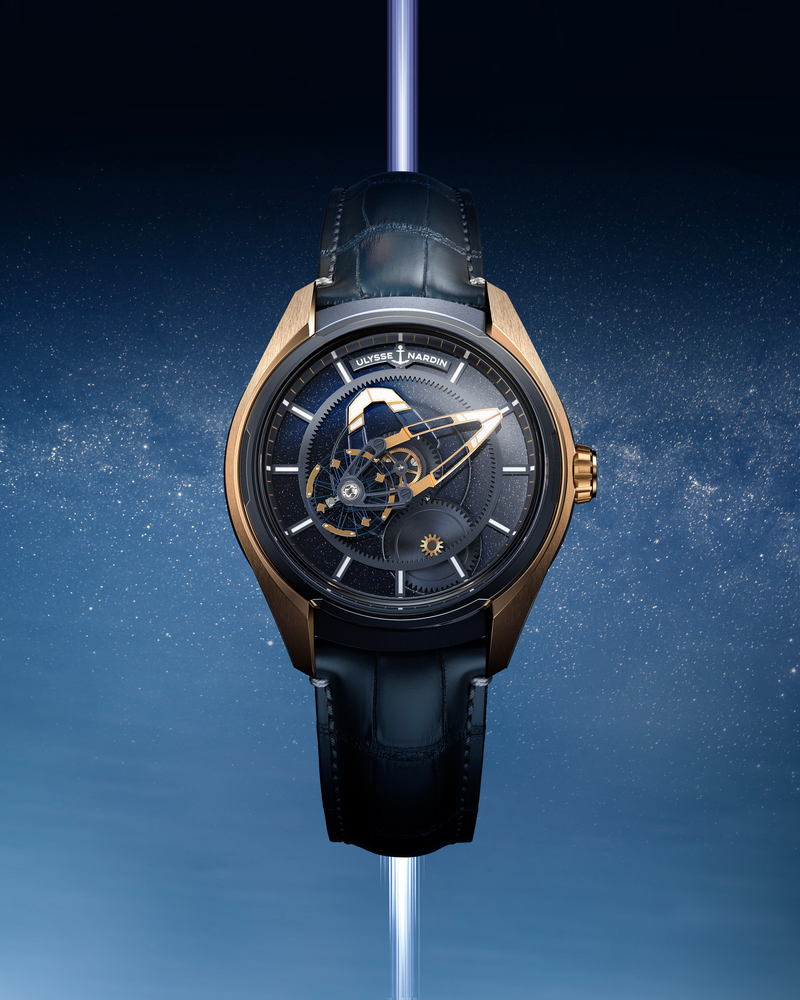 This ultra-design astronomical complication has very historical roots. Descended from the trilogy of astronomical watches created by Dr Ludwig Oechslin nearly four decades ago, the new Blast Moonstruck features the Ulysse Nardin manufacture Worldtimer movement housed in the geometrical case of a Blast. 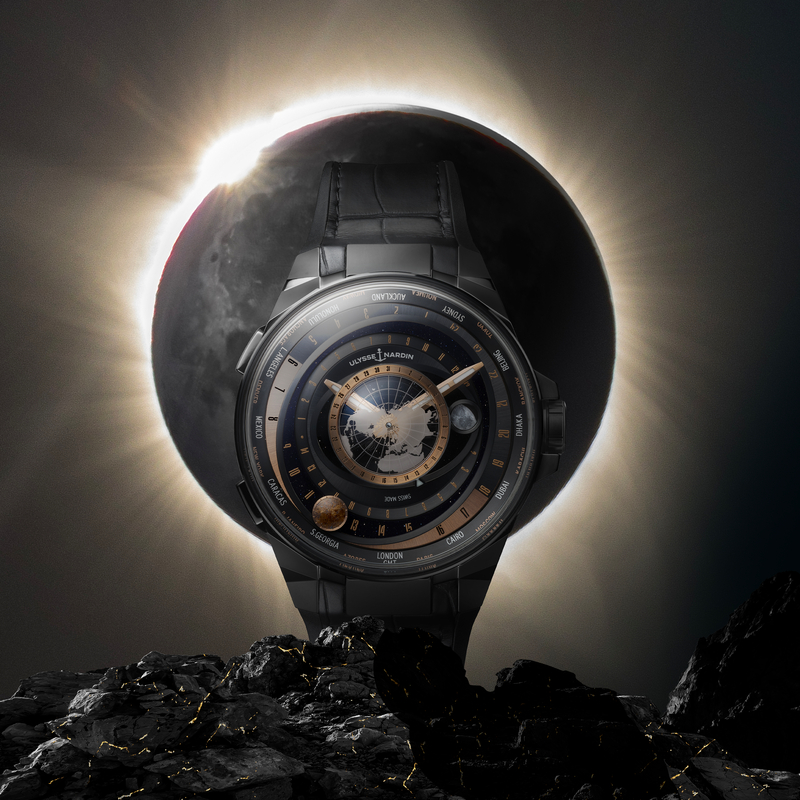 The Blast Moonstruck shows the moon’s rotation and the sun’s apparent movement as we observe it from Earth. A round aperture showing the moon phase is located at the apogee of the ellipse representing the moon’s orbit, which is depicted on the same ecliptic plane as Earth. The moon phase aperture is connected to an elaborate gear train. It completes one full rotation per day to follow the course of the sun and makes a full circle of the dial in one lunar month of 29 days, 12 hours, 41 minutes and 9.3 seconds. Paired with the sun phase, with the sun depicted in bronzite, the two trajectories give an easy-to-understand tide indication. 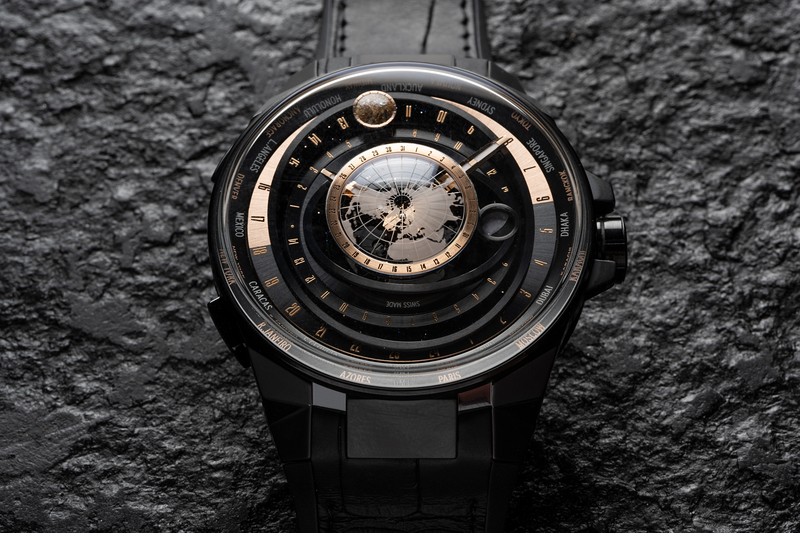 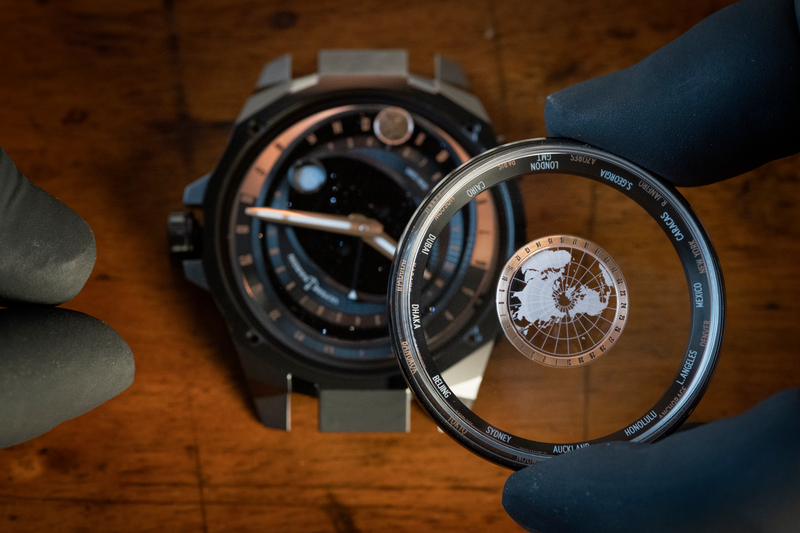 Set against a background of aventurine glass, the world timer displays the time in 24 different time zones. The pushers on the left of the case moves the hour hand forwards and backwards, without affecting the astronomical indications. The remaining indications (date, sun phase, moon phase, and coordinated universal time) can be set using the crown. The Blast Moonstruck is a limited production piece. 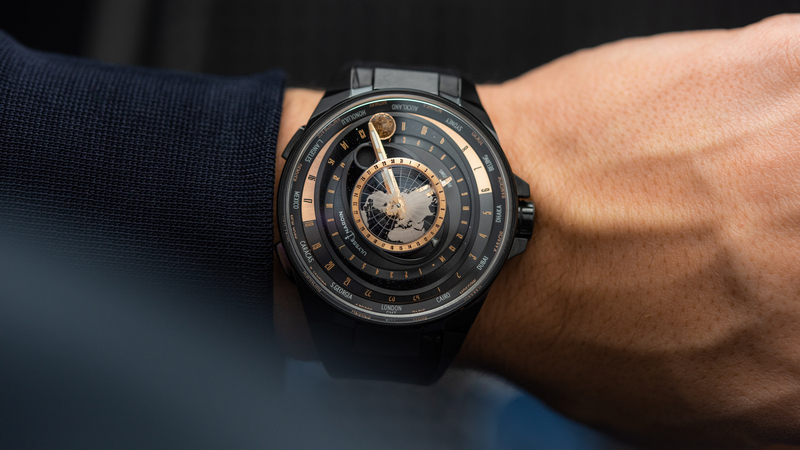 Founded in 1846, during the time of bold ocean exploration and international trade, Ulysse Nardin sought to develop his own marine chronometers, a key navigation instrument, along with complex pocket watches. Ever since, Ulysse Nardin has been at the forefront of precision chronometry, pioneering cutting-edge technology and through innovative use of materials. It remains one of the few watch brands to have a vertically integrated manufacture with in-house expertise to develop its own high-precision components and movements.