Frankfurt-based watchmaker Sinn has enjoyed a long history as one of Germany’s – if not the world’s – premier manufacturers of functional timepieces, namely pilot chronographs, navigation clocks and mechanical watches. The company’s leaning makes complete sense; its founder was Helmut Sinn, a former World War II pilot and instructor for blind flight, who formally launched his namesake brand in 1961. Since then, Sinn has established an ethos that places toughness, mechanics, reliability and precision front and centre. (It comes as no surprise, then, that the company produced a watch that travelled to outer space with several spacelab missions, and boasts certifications from DNV GL for its diving watches and TESTAF for its pilot models.)

It was only somewhat recently, though, that an emphasis on high-end technology entered the fold, when chartered engineer Lothar Schmidt took over the company in 1994. In the 26 or so years since, Sinn has released a steady stream of timepieces designed for professional divers and pilots and everyday wearers alike that are exceptionally crafted, assertive in their appearance and, naturally, technologically advanced. Some of Sinn’s most notable industrial achievements include magnetic field technology, Ar-Dehumidifying technology, and Tegiment hardening.

Sinn’s most recent releases fit quite neatly into its extensive catalogue. In both form and function, the new U50 range and the limited edition U1 are equally as gutsy as their predecessors, encompassing very fine mechanics and bold visual appeal. 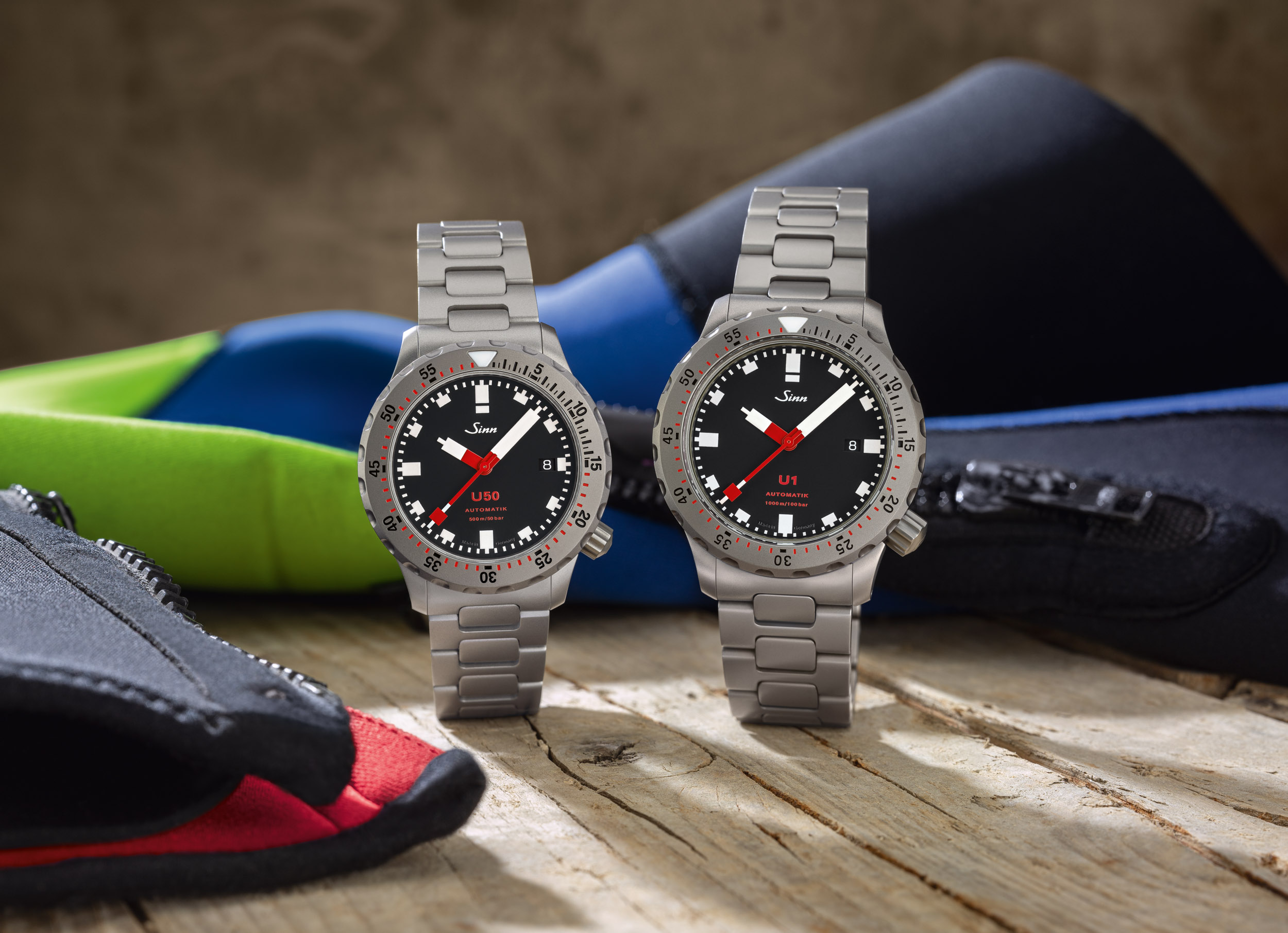 The launch of the Sinn U1 DE Limited Edition marks a rather auspicious date: the 30th anniversary of the reunification of Germany. Following the fall of the Berlin Wall in 1989, East and West Germany reunited on 3 October 1990. The event is no doubt an important milestone in Germany’s history, but the release of the U1 DE also holds similar significance for Sinn itself: it represents the partnership between Lothar Schmidt and co-owner and Managing Director of Sächsische Uhrentechnologie GmbH Glashütte, Ronald Boldt, who have worked together since 1999. 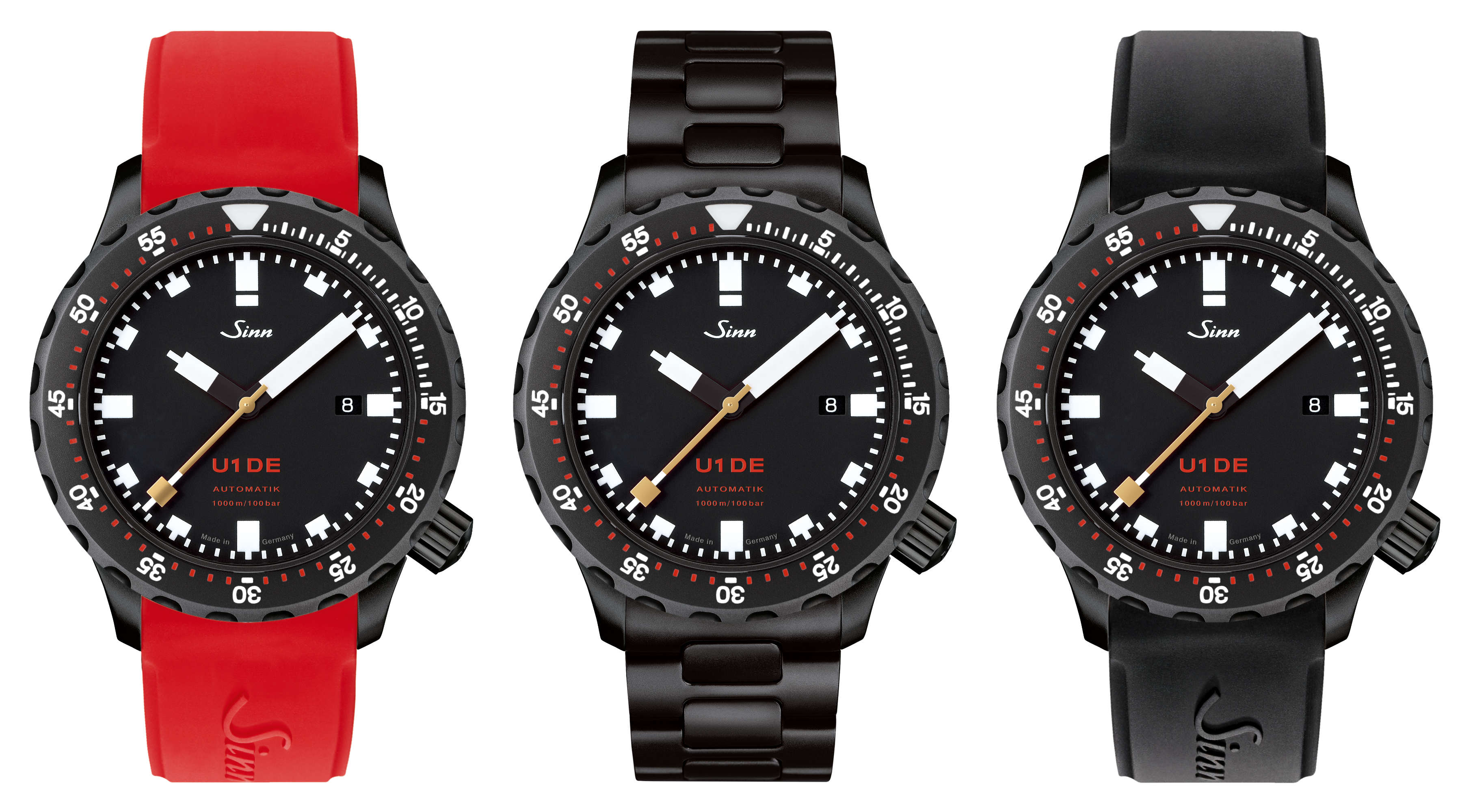 Limited to just 300 pieces, the U1 DE’s patriotic theme is obvious: the ‘DE’ in its name is a reference to Deutschland, and its black, red and gold colouring is a direct yet elegant homage to the country’s national flag. The matte black dial is punctuated with bright red text and a gold-plated second hand, and framed by vivid red markings on the watch’s bezel. Echoing the colouring of the watch itself, strap options include a matte black solid stainless steel bracelet and red or black rubber.

The U1 DE also bears many of the same hallmarks as previous U1 models: a generous 44mm case fashioned from German submarine steel (which is particularly resistant against saltwater) and reinforced using Sinn’s Tegiment Technology; a scalloped diver’s bezel with minute ratcheting; the crown at 4 o’clock; and incredibly impressive functionality. The U1 DE is powered by a Sellita SW200-1 automatic movement, has a 38-hour power reserve, and is pressure resistant to 1,000 metres.

The Sinn U50 is smaller than the U1, but its appeal actually lies in its compact size: where several dive watches appear quite hulkish on the wrist, the U50 – at 41mm – is a more restrained model. Its release has been heavily anticipated for a long time; many wearers revered the style and functionality of the U1 but craved a version with smaller proportions.

The U50 certainly delivers, packing much the same punch in terms of its aesthetic without the weightiness. The similarly inky dial contrasted with lucid red and white accents makes for a timepiece that truly stands out, and the blocky rectangular hands with smaller pointers at their tips ensure there’s no mistaking the watch’s roots: this is unquestionably a Sinn creation. There are actually three different models to choose from, each bearing the same dial but offering variations across the bezel, case and strap. The U50 has a silver bezel and case, the U50 SDR a black bezel, and the U50 S a black bezel and case. Strap options include black, white or red rubber, or a silver bracelet.

Inside, the U50 range is just as commendable. It’s powered by the Swiss-made Sellita SW300-1 automatic movement and has a 38-hour power reserve, plus it’s pressure resistant to 500 metres and anti-magnetic according to DIN 8309 standards.