Sinn are some of the best in the business when it comes to tool watches, especially those destined for the skies. It’s obvious, when you see how thoughtfully designed their watches are for the intended task, that the founder Helmut Sinn was a pilot himself. This ethos of utilitarian functionality, so well executed in Sinn’s pilot’s watches, is seen across their entire collection. As an example, the brand produces their dive watches in submarine steel, specifically chosen due to its highly antimagnetic nature as well as strong resistence to salt water corrosion. 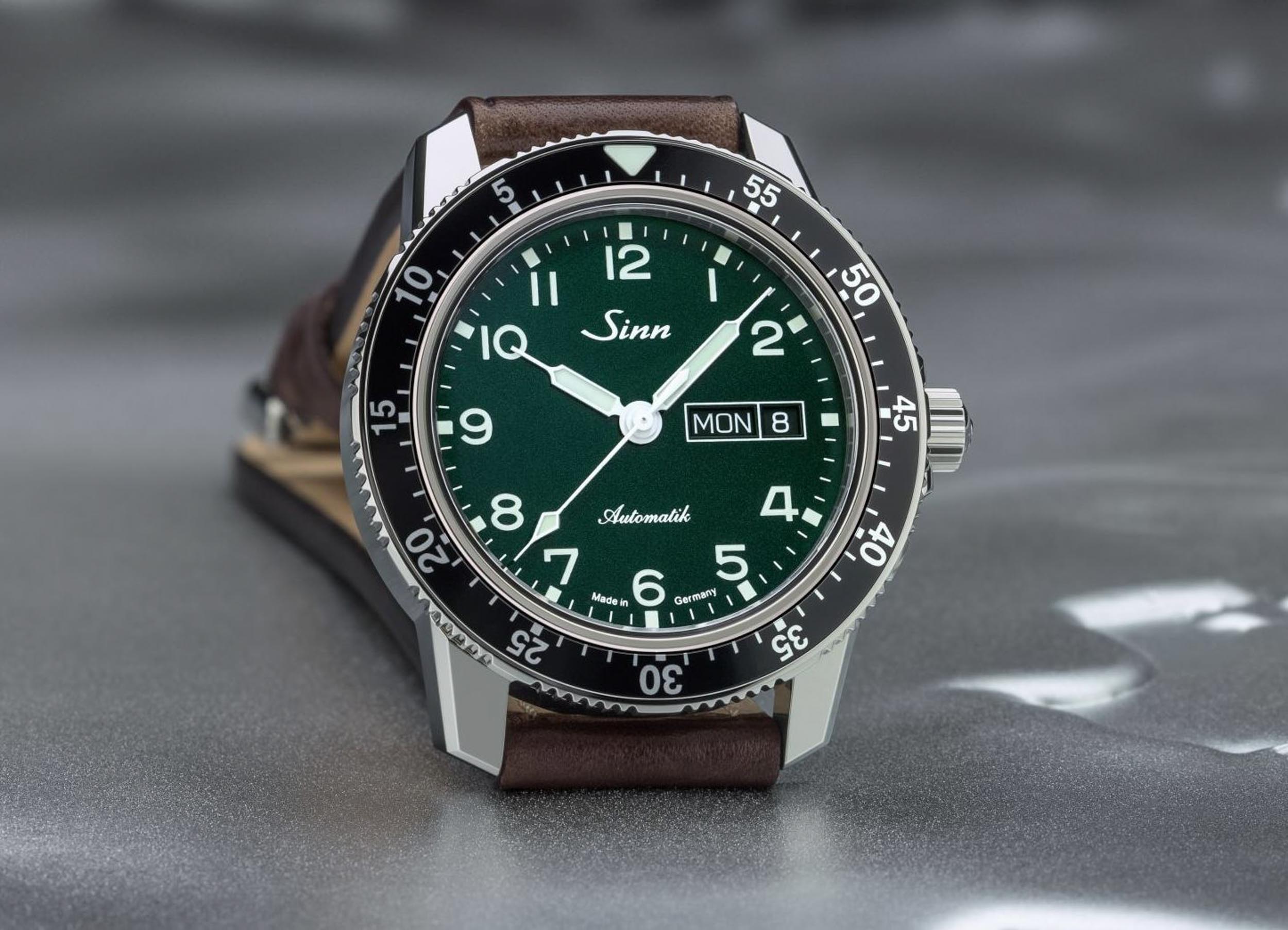 It is this attention to detail, and a deeply rooted consideration of the needs of the end consumer, that has seen Sinn gather a significant following over the last half-century. Baselworld 2019 was a chance for them to show off a new collection, and it didn’t disappoint. One of their best releases for the year, and the piece that is of greatest interest to their core customer base of tool watch enthusiasts, is their new Pilots 104 Sa A G. The Sinn Pilots 104 was first released in 2013, so is very much a part of the brand’s core collection. The new edition is limited in number to 500, with the most obvious update to this watch being the dial, now in a rich British racing green. Featuring a metallic tint to the paint, it shimmers in different light, a vivid eye-catching hue at some angles, and a dark (almost black) green in others.

In keeping with the Sinn DNA, the Pilots 104 is designed for optimum legibility, with highly contrasting hour markers and numerals on the dial, and syringe hands for quick and accurate reading. This watch also features both a day and date display for more practical day-to-day use, which is also highly readable with white text printed on a black background. Framing the green dial is a black 60-minute pilots bezel, produced with Sinn’s own captive design that prevents the bezel from being lost if knocked hard against something. The key features of a pilot’s bezel, in contrast to a diving bezel, is the bezel will count down when set, rather than tracking elapsed time. It is also bi-directional, rather than the traditional uni-directional ratcheting found on a dive watch.

Another update found in the new Pilots 104 is the movement. Past iterations of the Sinn 104 were powered by a Sellita SW 220-1, however the new Sinn 104 features an ETA 2836-2, a broadly similar movement but is produced by the Swatch Group. In keeping with the rest of the Pilots 104 collection, the watch will come on a dark brown leather strap with contrast stitching along its length, as well as an option for a steel bracelet.

All in all, the Pilots 104 Sa A G was one of Sinn’s strongest watches released for 2019. It is a considered blend of the strongest elements of a pilot’s tool watch (no-nonsense legibility, robust build quality), with new features that include the green dial to make it feel thoroughly new. The stunning new dial may have been inspired by the tones of the forest that surrounds Frankfurt, the home of the Sinn manufacture, or it might simply be that it just looks great. Either way, Sinn have executed a tried and true design language with contemporary flair, which will see them having no issue in finding homes for the 500 examples.

New Sinn Releases For Your Next Flight

Sinn Expands The U1 & U50 Collections