Limited to 33 in platinum 950, with a light-blue guilloché dial plate. In addition, for our 40th Anniversary, we’ll be releasing 10 Commemorative Edition Legacy Machine Thunderdome watches: 5 with a dark-blue guilloché dial and 5 with Aventurine dials, both with tantalum cases (a first for MB&F).

MB&F launched the first Legacy Machine in 2011 as a new line, distinct from their more avant-garde Horological Machines, as a way of paying tribute to 19th-century watchmaking. Intended to convey what an MB&F watch would look like, had Max Büsser been born in the 19th century, as opposed to the 20th century. As this decade draws to an end, MB&F has unveiled its most audacious Legacy Machine to date. The culmination of a years-long collaboration between two of the watch industry’s most brilliant minds, Eric Coudray and Kari Voutilainen. 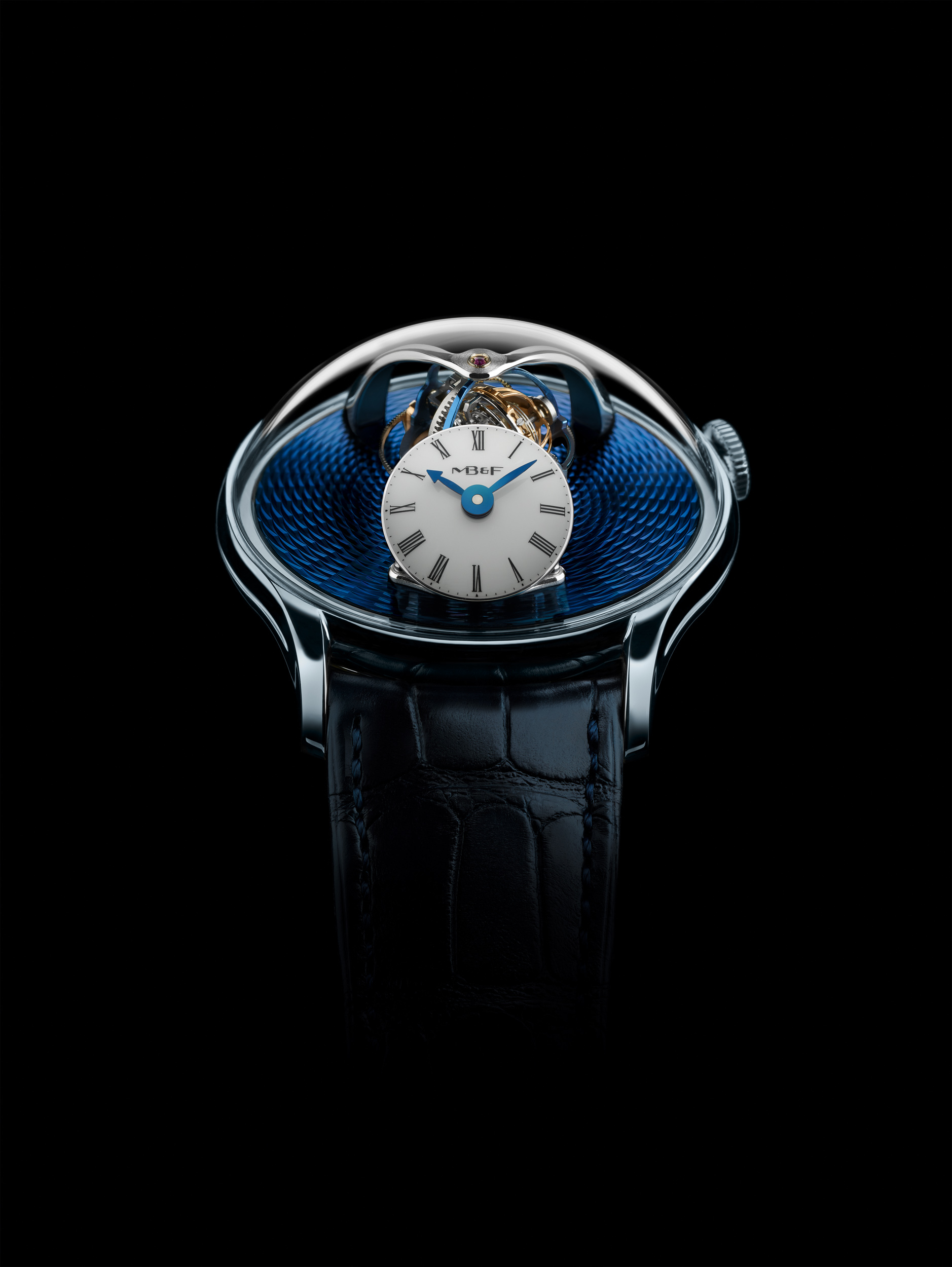 Rising above a sea of blue guillochage is a rotating spherical mass of gears, pinions and cages. Somehow, from this chaos of motion, order is extracted. Time is indicated on an inclined dial of stretched lacquer, proving that even the wildest horological whirlwinds can be tamed into the logic of hours and minutes.

MB&F founder Maximilian Büsser says, “One of the many things that makes me incredibly happy about this piece is that we got to bring together two people I adore in this industry; who are incredibly talented, have completely different styles and personalities, and have never had the chance to work with each other”. 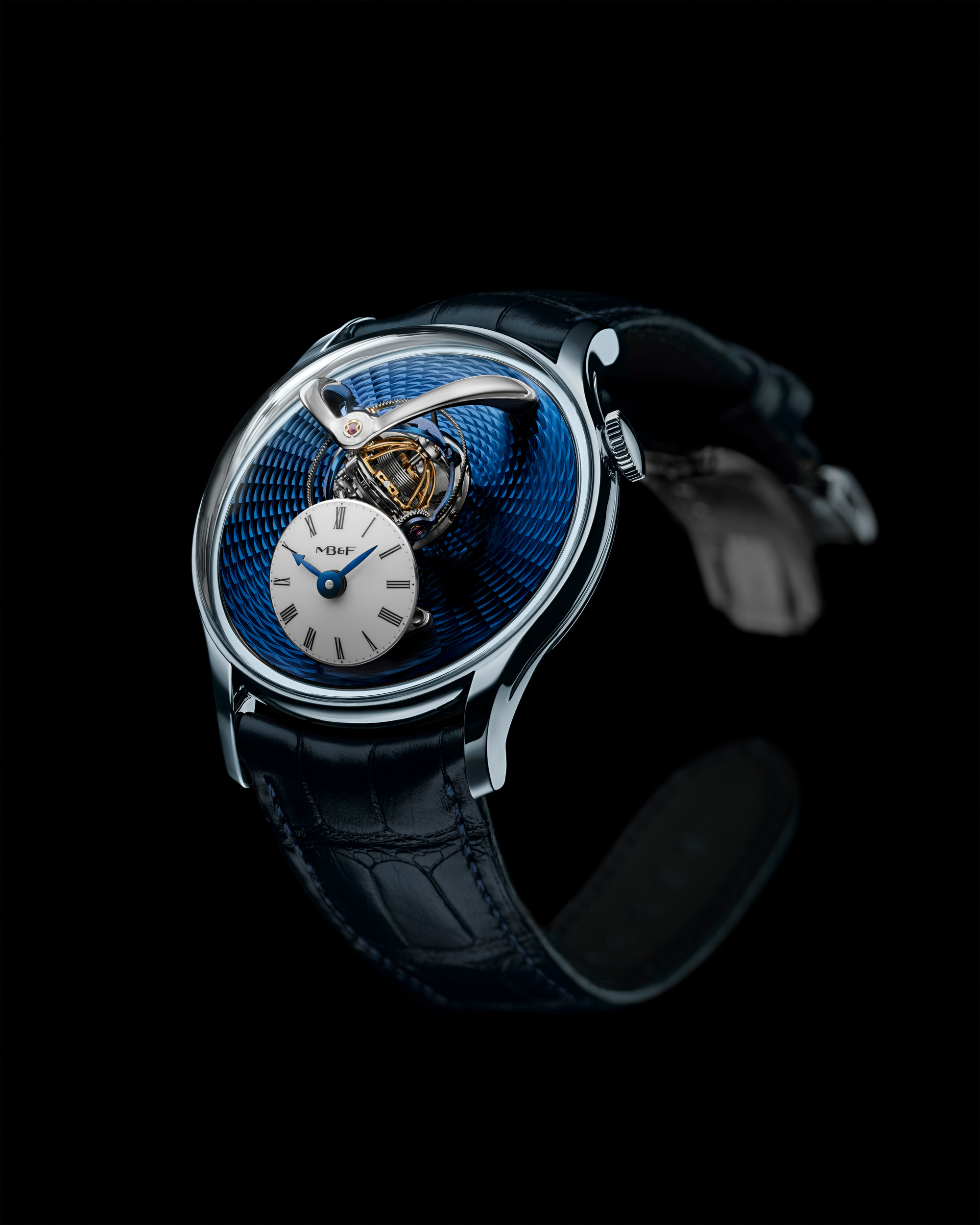 Once taken, such chances can reshape entire landscapes. MB&F’s only directive to Eric Coudray initially was to “make the craziest, most cinematic three-axis tourbillon ever.” Having been given free rein to create, Coudray built something that was entirely new in his experience: a mechanism that goes beyond the tourbillon, the proprietary new MB&F ‘TriAx’.

The new TriAx mechanism, as showcased in Legacy Machine Thunderdome, fulfils MB&F’s directive to Eric Coudray in spectacular fashion. The triple-axis rotating escapement has a stripped-down construction that transgresses both tradition and modern convention. Instead of the rational (and cumbersome) system that associates one cage with each rotational axis, the TriAx defies logic with a three-axis, two-cage configuration that allows for unprecedented visibility of the Thunderdome’s beating, whirling heart. 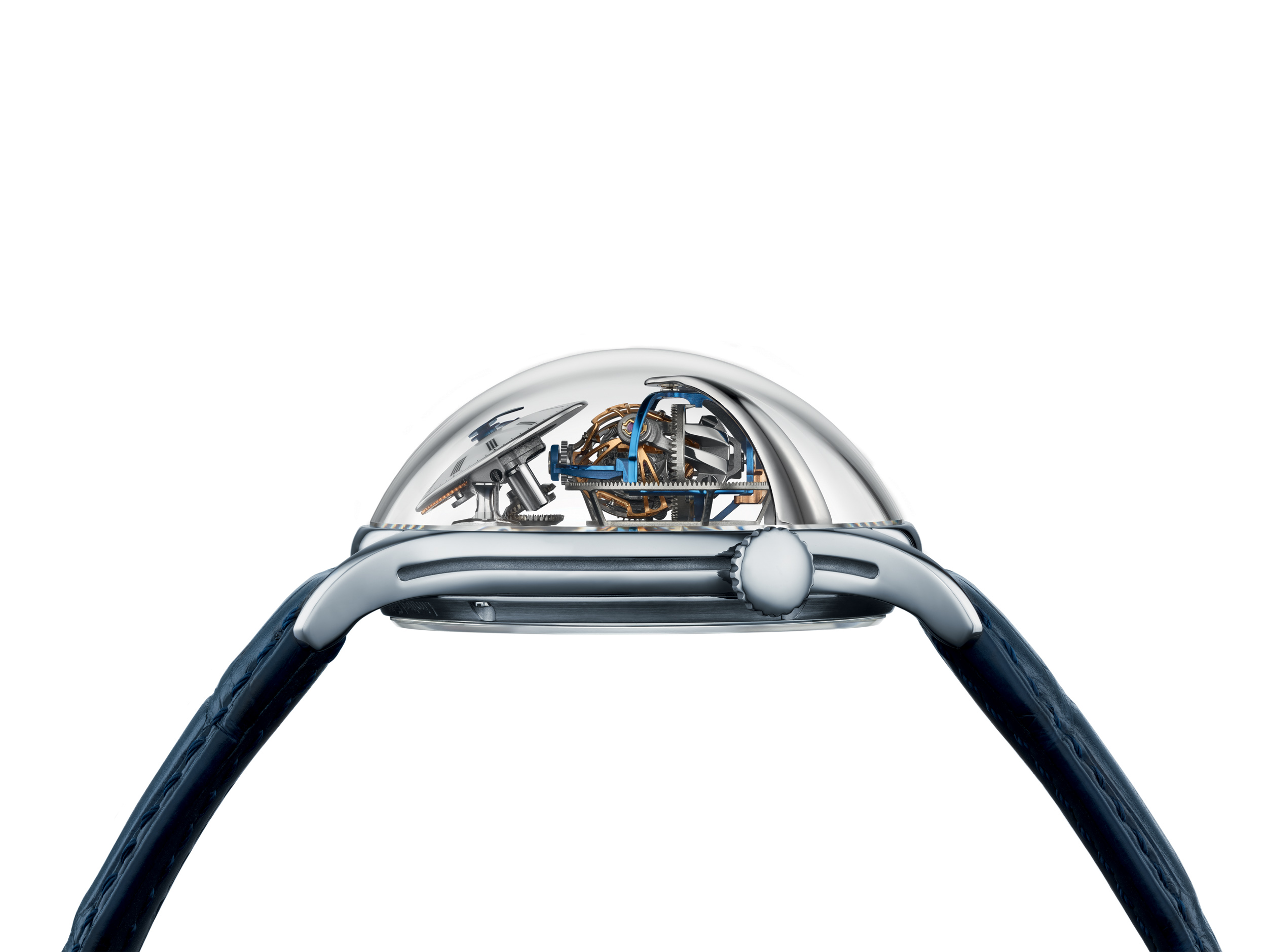 In a second stroke of whirlwind audacity from Coudray – whose name is practically synonymous with audacious watchmaking in the 21st century – the TriAx mechanism of LM Thunderdome uproots our most familiar notions of watchmaking escapements. Controlling the rate at which energy escapes from the barrel is the unusual Potter escapement, which utilises a fixed escape wheel in place of the mobile escape wheels seen in virtually every type of modern rotating escapement. The fixed escape wheel of the Potter escapement – named for 19th-century watchmaker and inventor Albert H. Potter – allows for higher rotational speeds in such a mechanism. 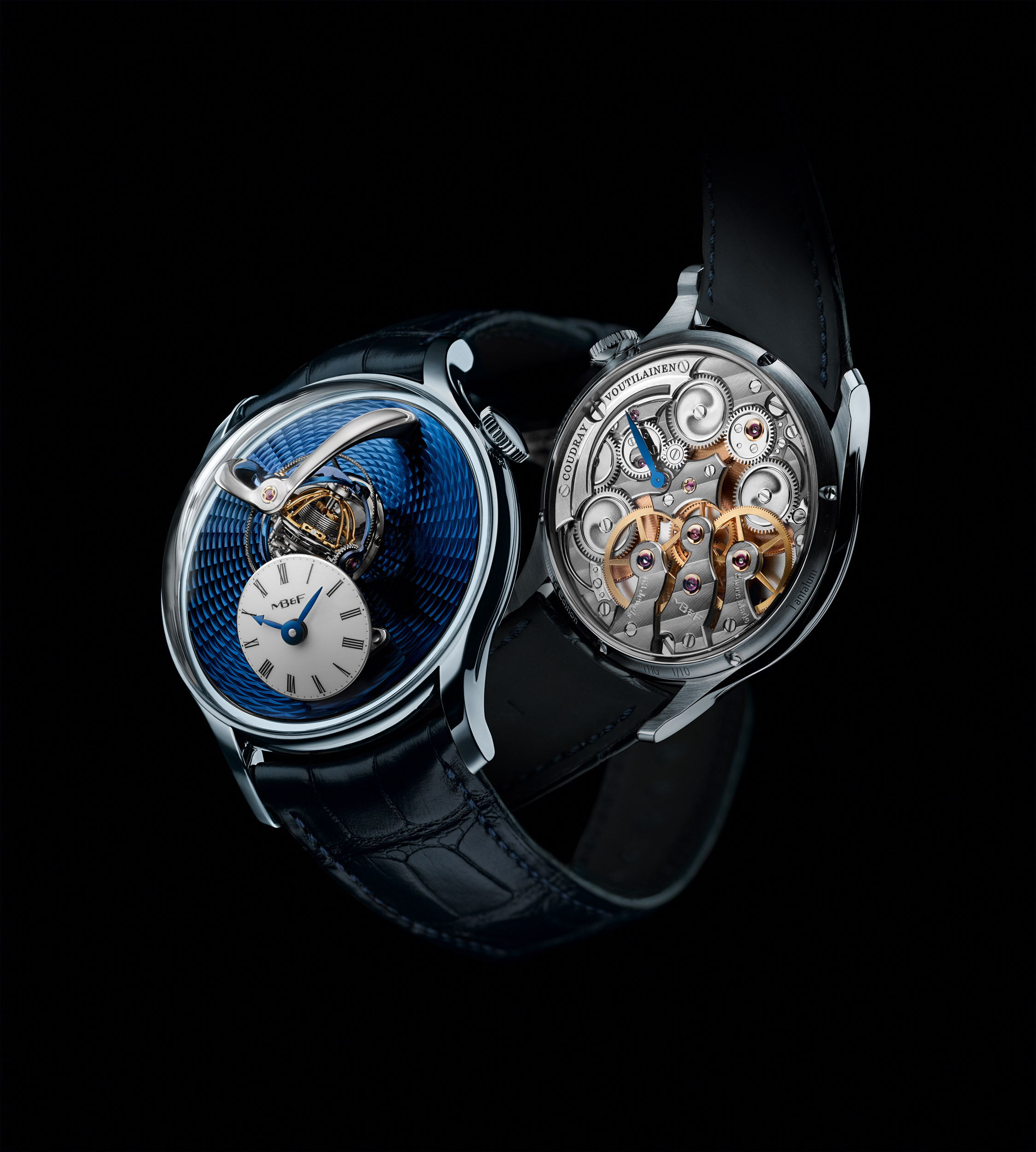 Integrating a fixed escape wheel within a tri-axial rotating mechanism is something that has never been done before, but LM Thunderdome achieves this, and for good reason. The high-speed rotation consumes energy voraciously, with the innermost structure completing one turn in 8 seconds, the intermediate cage rotating once every 12 seconds, and the outermost cage making one full rotation every 20 seconds.

An additional advantage of the Potter escapement is that it frees up more space for the balance and hairspring, allowing to better admire another completely novel development: the balance of LM Thunderdome takes a hemispherical form, wrapping around the helical hairspring for an unprecedented configuration of regulating organ in both modern and classical watchmaking. 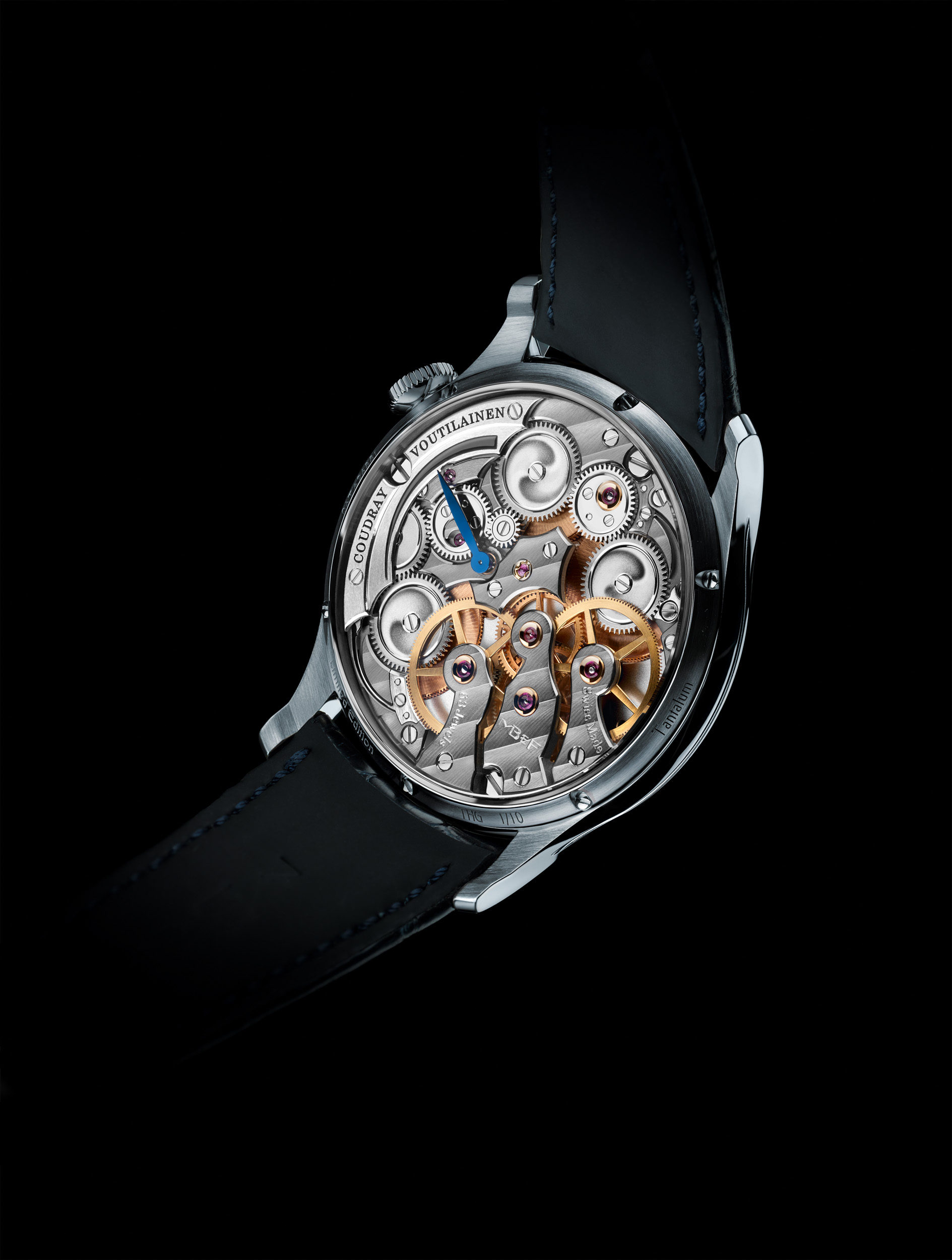 Even for a seasoned watch connoisseur, deeply familiar with multi-axis tourbillons over the 15 years since this type of mechanism debuted on the horological scene, Legacy Machine Thunderdome is an eye-opener. Not only is it faster, its components whirring past at dizzying speeds – it is larger, thanks to the offset axis of the outermost cage that increases the overall displacement of the balance, and it is showcased like no other. The pronounced arch of the sapphire crystal dome allows Eric Coudray’s opus to sit fully above the dial plate, visible from all sides. 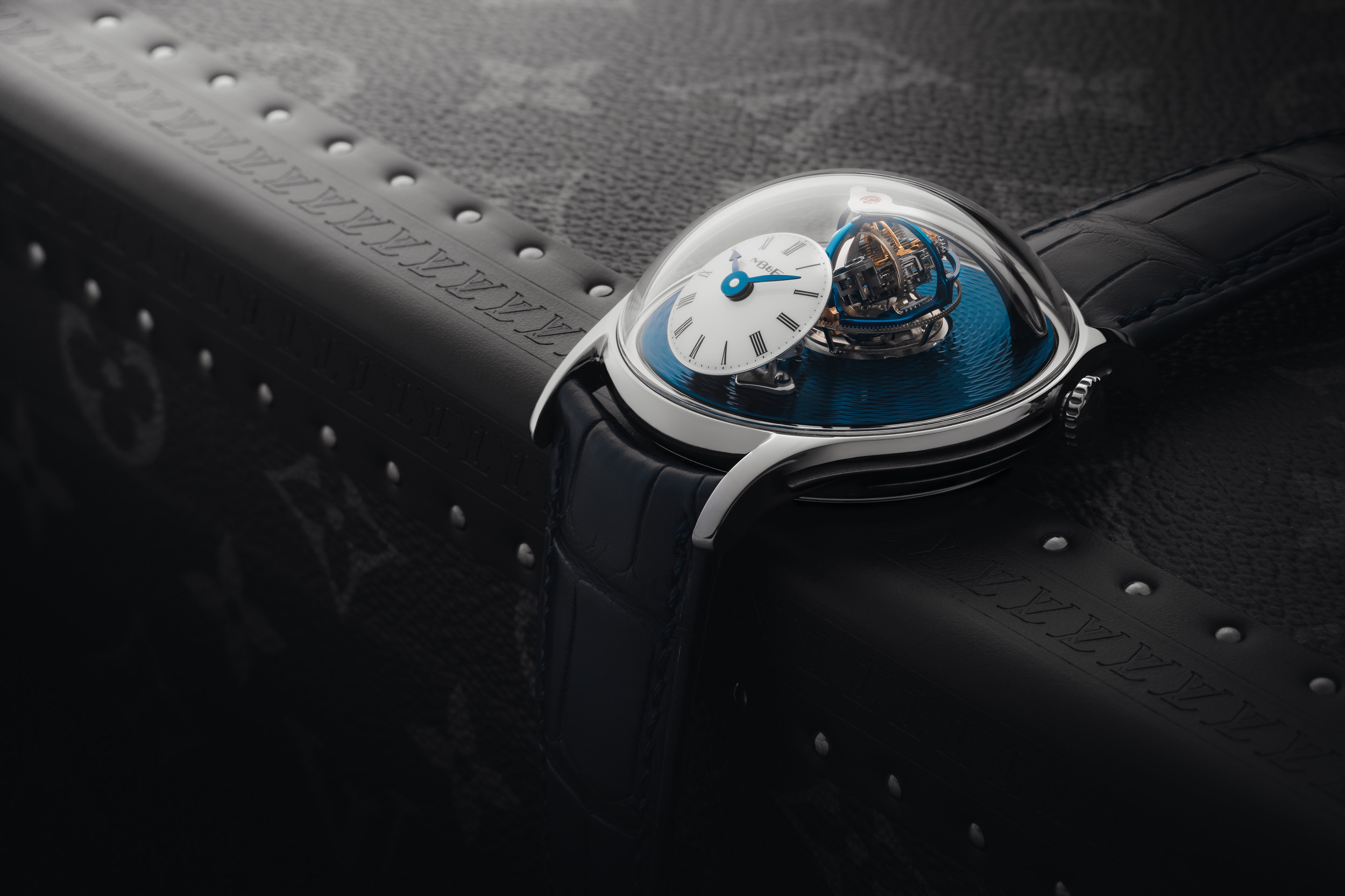 As difficult as it may be to tear your eyes from the dial-side spectacle, the reverse of the LM Thunderdome engine is equally rewarding. The manual-winding, triple-barrel movement may have been technically conceived by Eric Coudray, but its aesthetics are fully Kari Voutilainen. 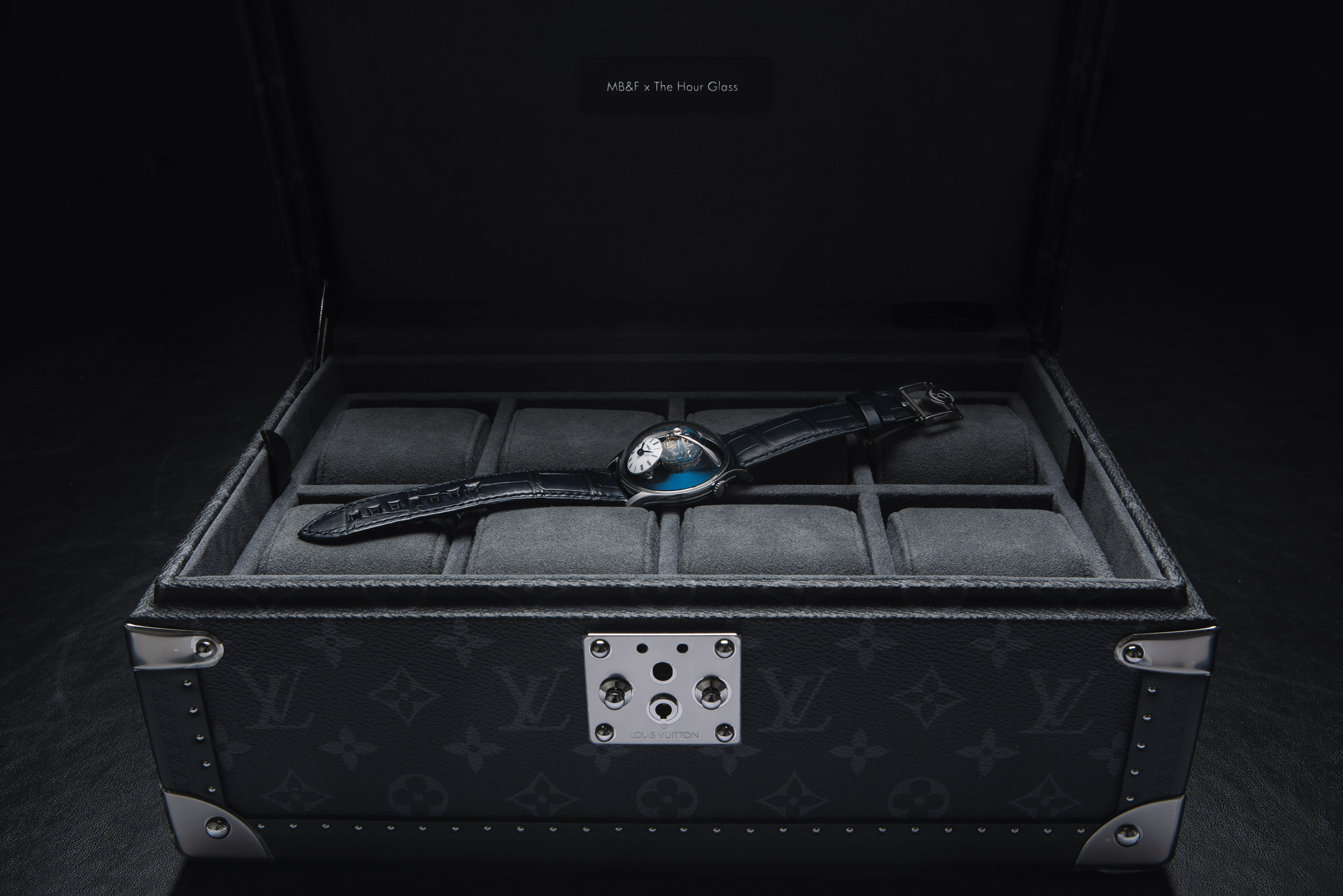 Countless sessions passed between the two watchmakers until the untrammelled dynamism of Coudray’s engine design took on classically elegant forms. Smoothly rounded bridges, incorporating sharp hand-bevelled internal angles and mirrored curves suggest a deep, unyielding calm that anchors the turbulent maelstrom on the other side. For the first time in an MB&F creation, Kari Voutilainen has applied his proprietary style of finish onto the ratchet wheels. This technique imparts a serpentine shimmer to the circular surface, catching the light in sigmoid waves. This technique is a closely guarded secret in the Voutilainen workshops, requiring years of experience and special tools to execute. 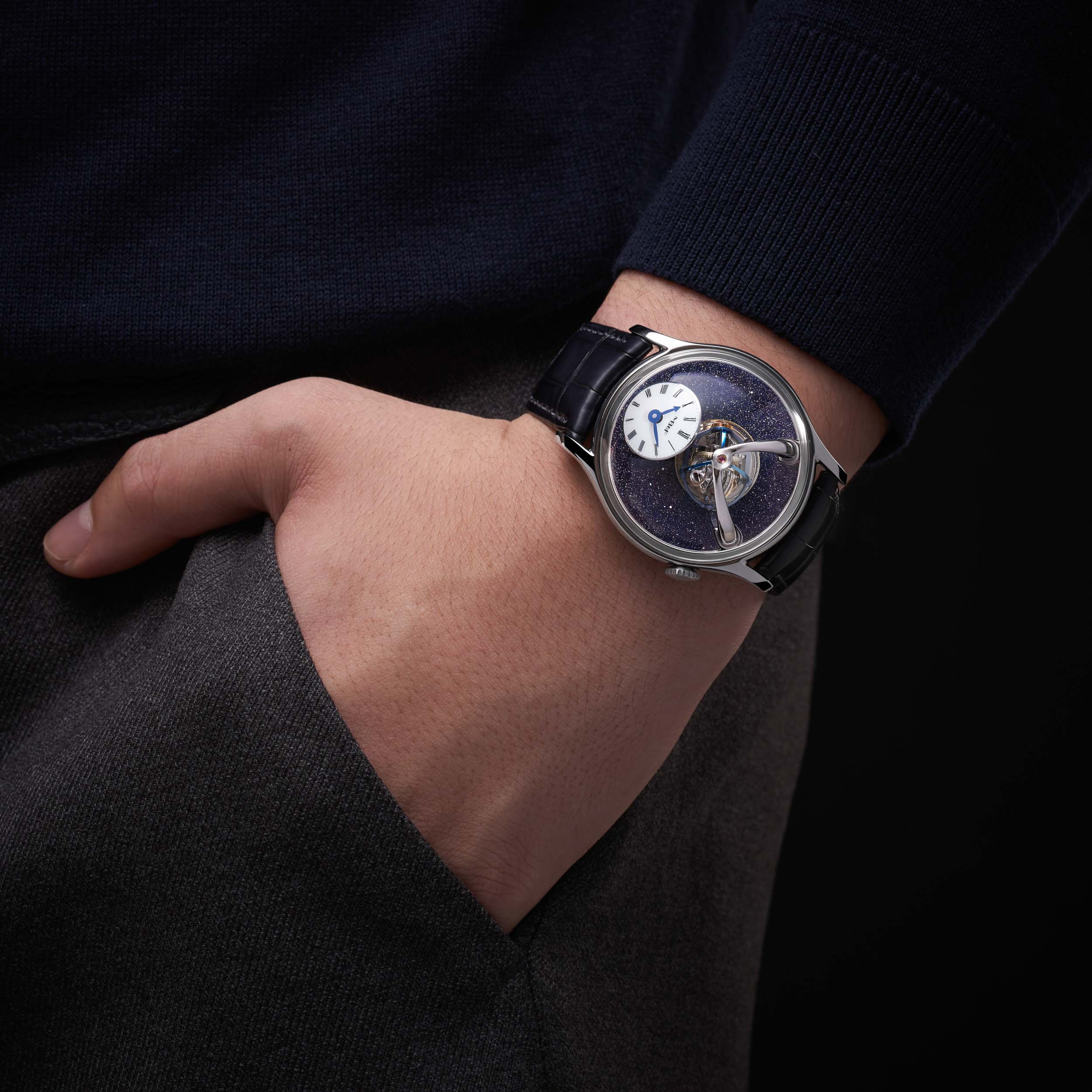 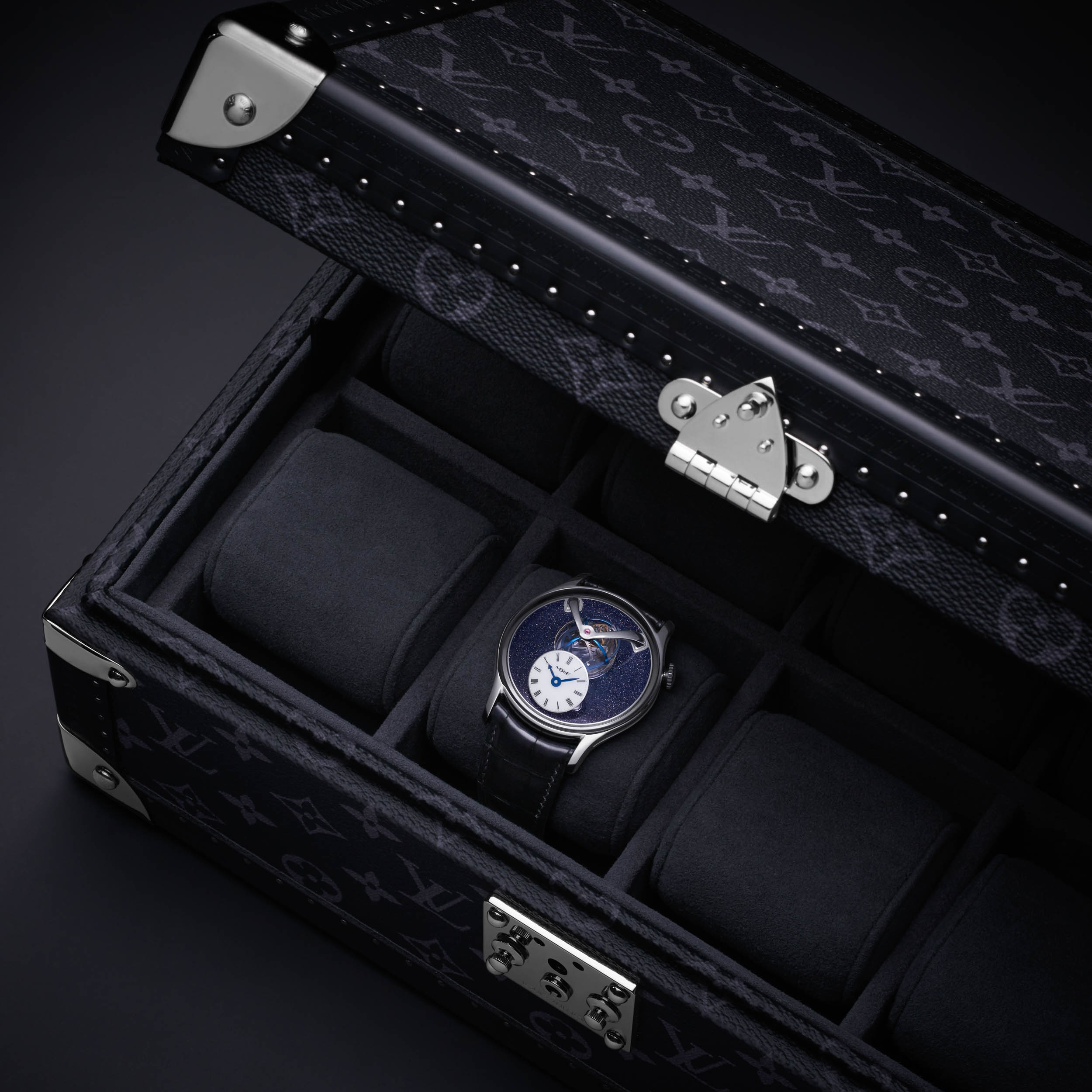 ⁠Crafted like a trunk, the Louis Vuitton Watch Case is an ideal travel companion for the modern watch collector and frequent flyer. With space to hold 8 watches, the watch case – fitted with an S-lock with a key – effortlessly transforms from a secure travel case to a stylish display case when open. It also features a removable main tray, to hide other valuables and includes individually removable watch cushions. Combined, the MB&F LM Thunderdome The Hour Glass Commemorative Edition and the Louis Vuitton Monogram Eclipse 8 Watch Case represent the best in independent watchmaking and luxury accessories, it’s an unprecedented collaboration which we’re proud to be part of, in celebration of our 40th Anniversary.

Max Büsser on The LM Perpetual