Engraved just under one of the lugs on the back of AkriviA’s unique Rexhep Rexhepi Chronomètre Contemporain – made exclusively for the 8th biennial edition of the Only Watch charity auction – are three little letters – “JHP”. To the casual watch fan, these letters may not mean much, however, to the passionate collector and horological expert alike what they stand for is worth more than words. That’s because these letters are the hallmark of legendary case maker, Jean-Pierre Hagmann.

Regarded as arguably the greatest, and certainly the most famous, case maker of the late 20th century, Mr Hagmann is the man behind the design and construction of many of Haute Horlogerie’s most iconic watch cases. With a list of clients which includes such respected brand names as Patek Philippe, Audemars Piguet, Breguet, Blancpain, and Vacheron Constantin.

Earning special fame for his work on the minute repeater cases he made for Patek Philippe in the 1990s, the watches that bear the reputable “JHP” maker’s mark often command higher prices than comparable pieces at auction, and Mr Hagmann’s work is celebrated with his name specifically highlighted in auction catalogues. Putting him in the elite minority of independent Swiss component manufacturers that have made a name for themselves.

While this latest collaboration between two of Geneve’s most extraordinary artisans is certainly only the beginning of something exceptional, Rexhep Rexhepi’s rise to prominence in recent years has already catapulted the AkriviA watchmaker’s life and work into the horological headlines, however the name Jean-Pierre Hagmann still remains a relative mystery to many of today’s watch admirers. At least that was, until now. 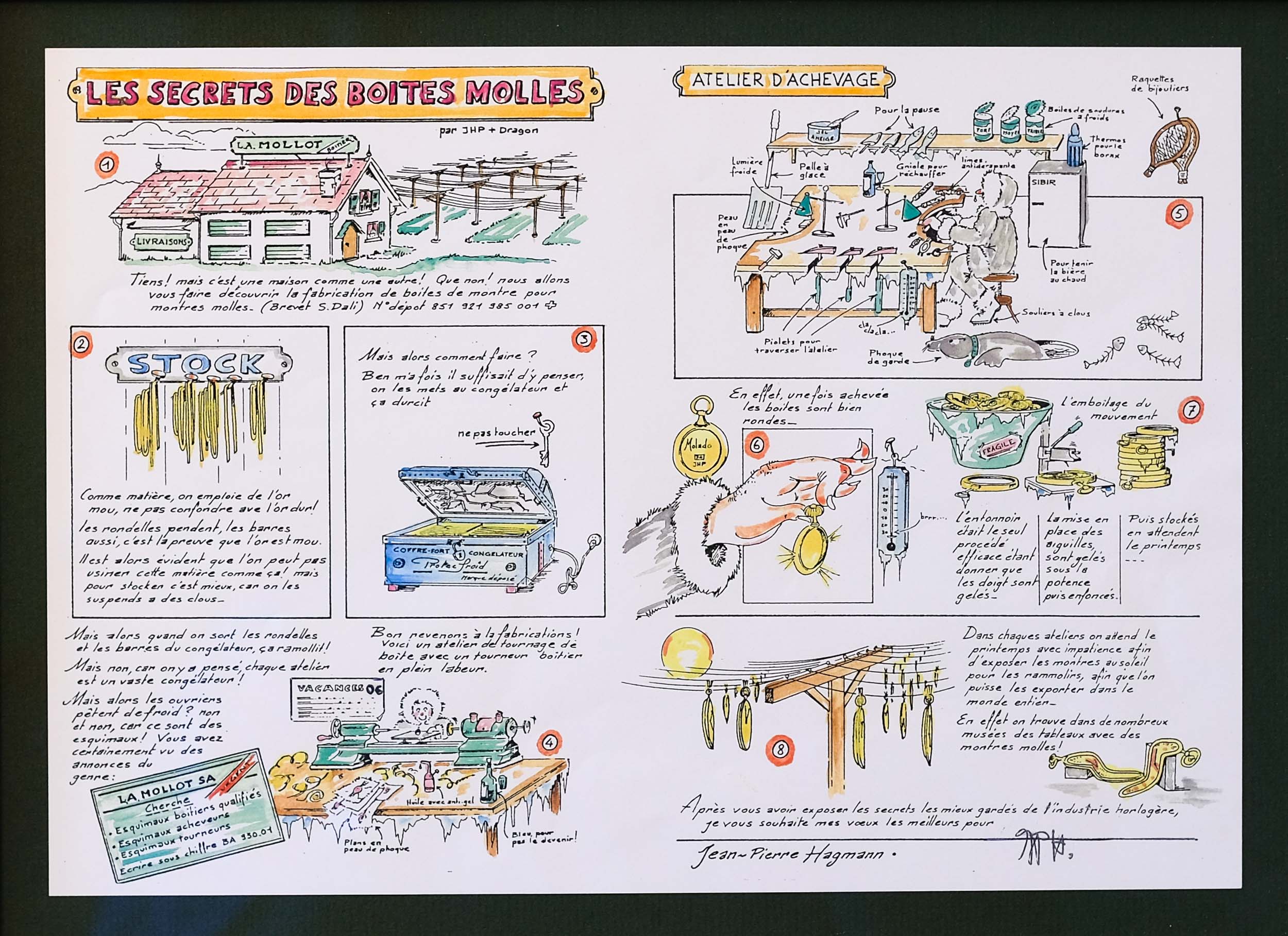 The Career of the Legendary Casemaker

Jean-Pierre Hagmann’s road to horological greatness was self-paved. Born in 1940, he learnt his trade on the job rather than attending watchmaking school. Starting his career in 1957 as a trainee at the now defunct Geneva jeweller Ponti Gennari – known for the high-quality gold watch bracelets which it supplied to manufacturers like Patek Philippe. It’s interesting to note that the former jeweller’s factory is now the site of the Patek Philippe Museum. A rather fitting figurative expression of the heights of which Mr Hagmann would reach after beginning his career at the jeweller.

Following his time at Ponti Gennari, in 1961 Hagmann began work at another well-known jeweller, and famous maker of watch bracelets, Gay Frères. A name I’m sure most would recognise, as Gay Frères played a major role in establishing stainless-steel bracelets as an industry norm, supplying them to every major watchmaker from Heuer and Rolex to Patek Phillipe and Audemars Piguet. However, while making jewellery and bracelets were what first brought Mr Hagmann into watchmaking, it would be several years later that he would find his true passion, and in 1968 he joined case maker Gustave Brera and began his journey making watch cases.

Staying at Gustave Brera until 1971, Mr Hagmann then joined famed maker of watch bracelets, Jean-Pierre Ecoffey. Where he was quickly put in charge of its newly established case making division after the company purchased prominent casemaker Georges Croisier (later known as Genevor SA).

Then in 1984 Mr Hagmann went out on his own. Having honed his skills and mastered his abilities he began making cases under his own name. Opening a workshop and starting his eponymous company where he would continue to make his mark right up until he sold his business to Vacheron Constantin. Staying on for 18 months to pass on his skills to the young Vacheron artisans before retiring in 2017.

Still, nothing could stop Mr Hagmann from continuing his life’s work. Filling his days repairing vintage motorcycles or restoring Cartier mystery clocks, he continued to make special one-off watches for private clients, hand making the case while finishing and decorating a supplied movement. In fact, he’s often seen wearing one of his own creations which he made to celebrate his retirement. And now today there’s his collaboration with AkriviA, and the incredible Only Watch is undoubtedly only the beginning.

The Watches that Made the Man

You won’t find a computer in Jean-Pierre Hagmann’s workshop, instead the accomplished artisan prefers to design the cases he makes on paper. Creating line drawings while calculating every angle and every measurement before prototyping, constructing, and finishing every detail manually.

He’s from an era before CNC machines, and Mr Hagmann takes great pride in being one of the very last vertically integrated case makers. A trait which over the years allowed him to make cases for some of the most iconic watches of our time. Including one of the most complicated pocket watches in the world, the Patek Philippe Star Calibre 2000, as well the platinum cased Patek Philippe Perpetual Calendar Reference 3448, one of which used to belong to industry great Mr Jean-Claude Biver. But it’s his other work with Patek Philippe that he is best known. Namely the minute repeater cases he designed and built for the references 3974, 3979, and 5029. With the later reference made to commemorate the inauguration of Patek Philippe’s then new Plan-les-Ouates workshops in 1997.

It’s said that the sounds which chime from the minute repeating cases made by Jean-Pierre Hagmann are crisper, with the cases having more resonance, and many collectors will single them out when they come up for sale. A characteristic which is no accident, as Mr Hagmann perfected the sound using countless amounts of trial and error, preferring to make cases that were smaller and lighter with a particular preference for the sound which rose gold can produce.

The chimes of Mr Hagmann’s cases are not all that he is known for either, and the list of innovations which he has brought to the industry is immensely impressive as well. Most notably he developed a solution to the way by which the minute repeater slider was attached to the case. Integrating a channel into the case’s side to ensure stability and perfect operation every time. Today almost every minute repeater operates this way.

Beyond the big names, however, Mr Hagmann also produced cases for many of the independent watchmakers of the 1980s and 90s. Including Franck Muller, developing the case for the very first dial side tourbillon wristwatch in 1984, and then bringing to life the 3D tonneau shaped cases of which the Master of Complications brand is so synonymous. Designing and manufacturing the very first Franck Muller Cintree Curvex case. 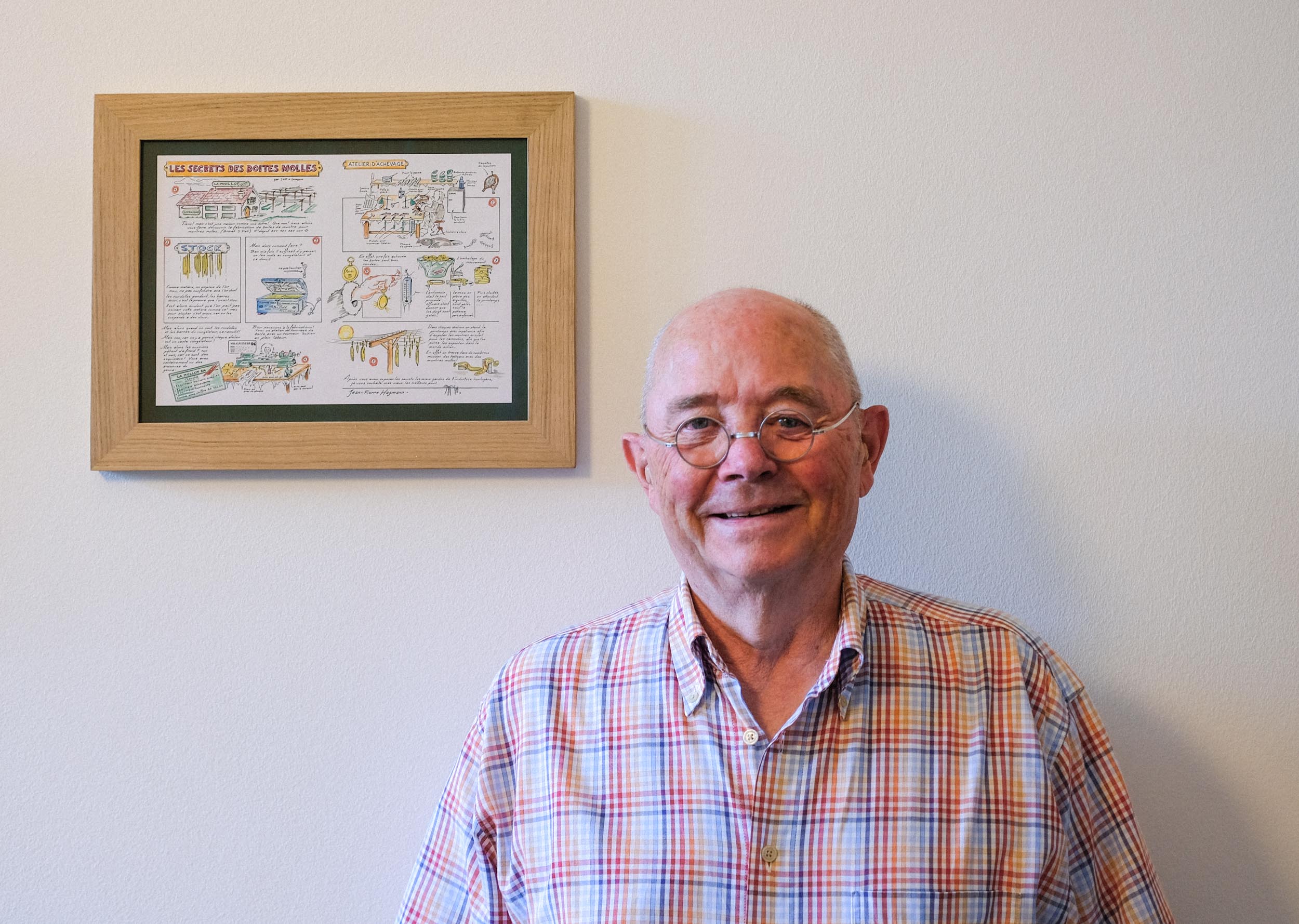 It’s these skills of ingenious creativity and precise work which Mr Hagmann is best known, and which almost certainly laid the foundations for the independent watchmakers of today. But, after a career that spanned some five decades, Jean-Pierre retired in 2017. However, that’s proved to be not exactly the case anymore (pun intended!)

Today we’re pleased to announce that Jean-Pierre has decided to join AkriviA. The importance of this partnership cannot be understated; in doing so, both AkriviA and Jean-Pierre will ensure that the knowledge and skills he’s honed over decades of experience will be preserved for future generations. 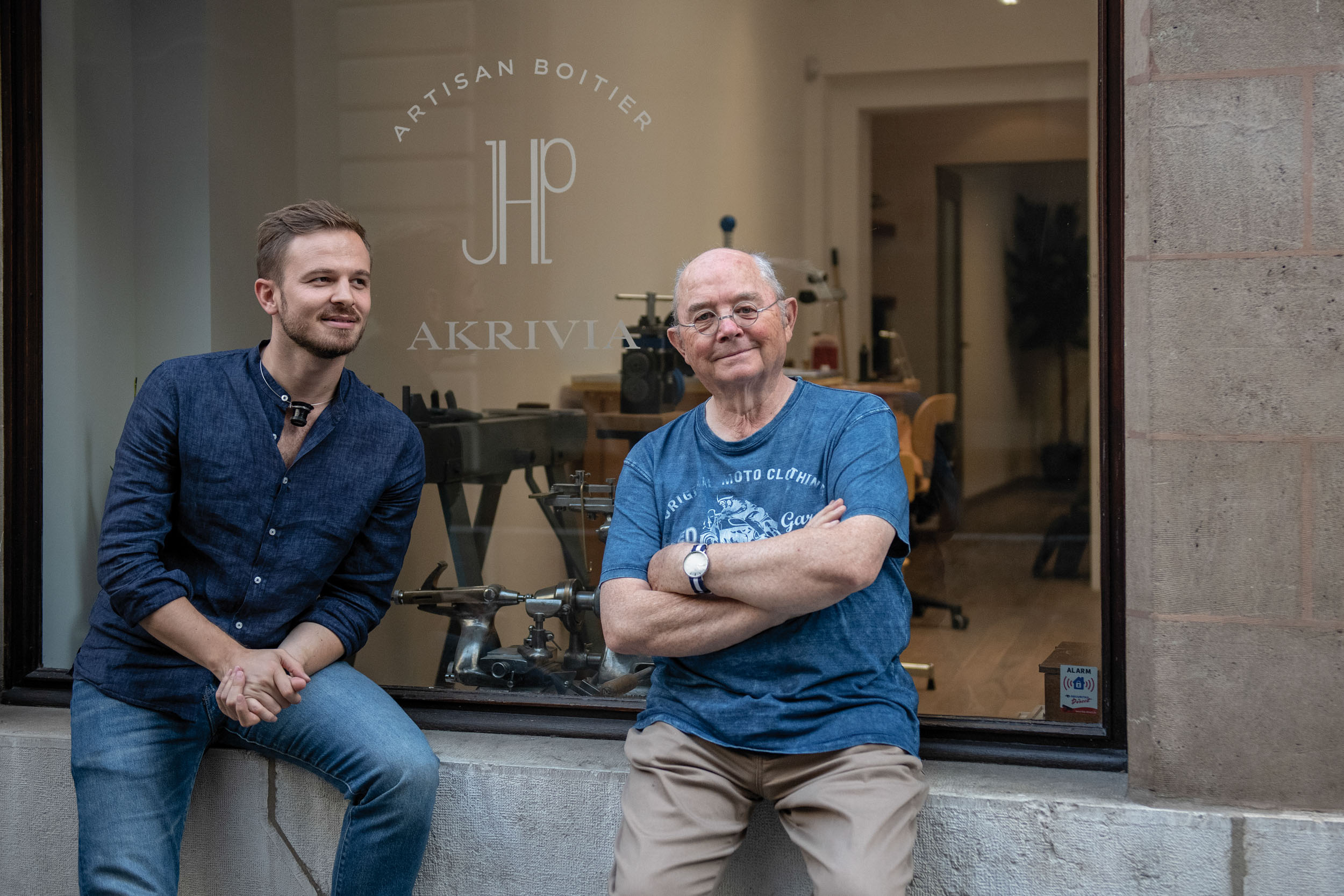 Aside from specialist restoration of vintage watch cases for international auction houses, Jean-Pierre now makes cases exclusively for AkriviA. His role is twofold,  to design and manufacture watch cases, with an eye towards vertical integration. And to secondly nurture the next generation of case makers.  Best of all, Jean-Pierre is now setup just a few doors down from the AkriviA workshop in Old Town Geneva.

“AKRIVIA has evolved gradually, but now I want to go to the next stage – creating our cases in our own workshop, in exactly the same spirit as our movements. With the exceptional experience and expertise of Jean-Pierre, I want to integrate an almost-forgotten profession into AKRIVIA. Our collaboration is based on our common desire to create beautiful, handcrafted cases to showcase the movement.” Rexhep Rexhepi

“During my career, I created thousands of types of watch cases by combining tradition with my imagination and the use of different production techniques. I am delighted to make something beautiful with Rexhep, while bringing new ideas and new solutions to case making – this will be my last great fireworks.” Jean-Pierre Hagmann 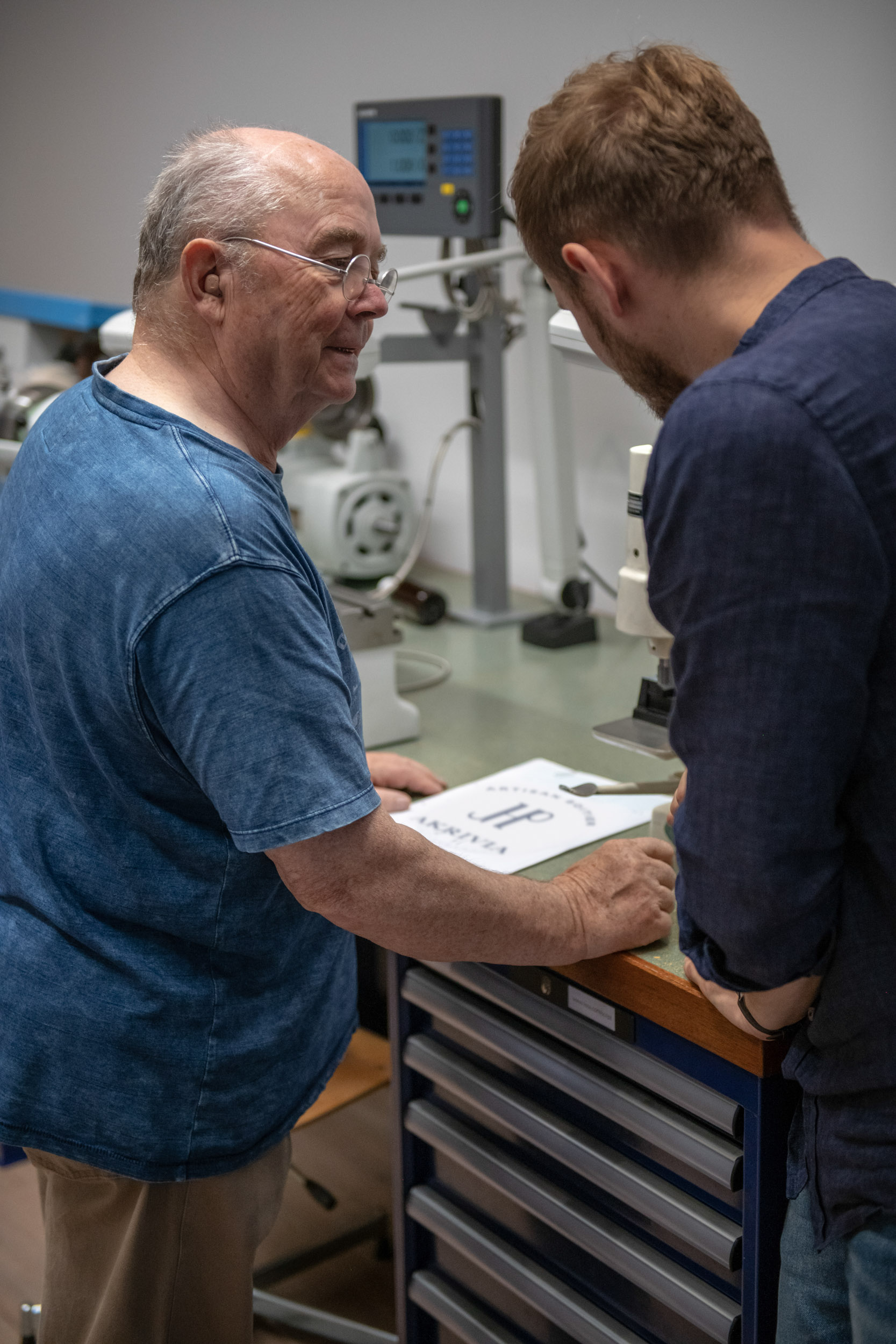