Since the emergence of motor cars and aeroplanes in the last century and a half, drivers and pilots have been somewhat inextricably linked with watches, first out of necessity, gradually becoming tradition. It’s almost inevitable that cars and planes are sources of inspiration for watch design. The following MB&F’s Horological Machines are examples of this continued link.

Other Articles in The Thematic Evolution of MB&F: The Animals & Space and Origins 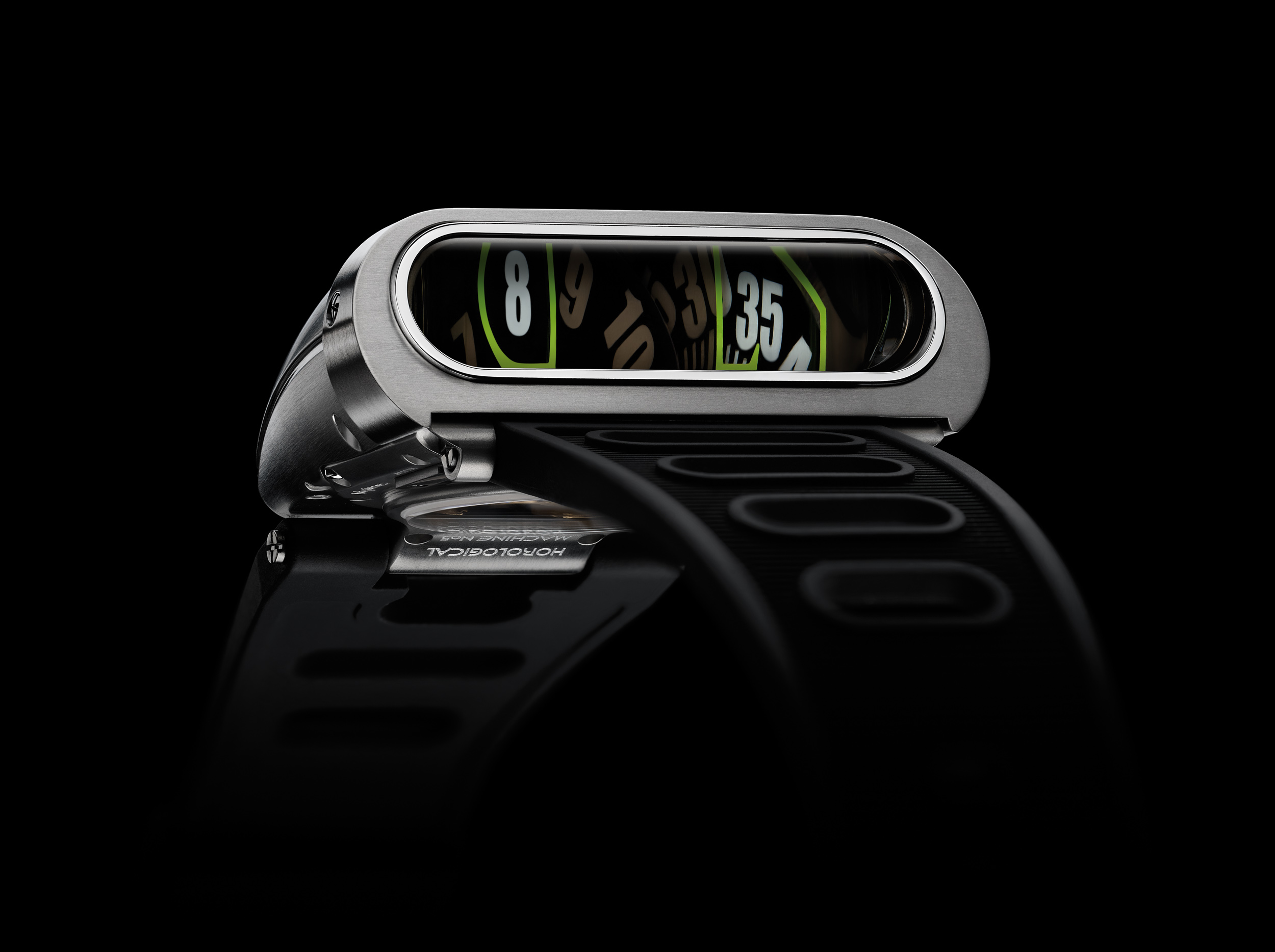 The HM5 marked the start of driving watches created by MB&F. There is no mistaking the tribute being paid to the Amida Digitrend, one of the most iconic driving watches with a digital time display from the 1970s. 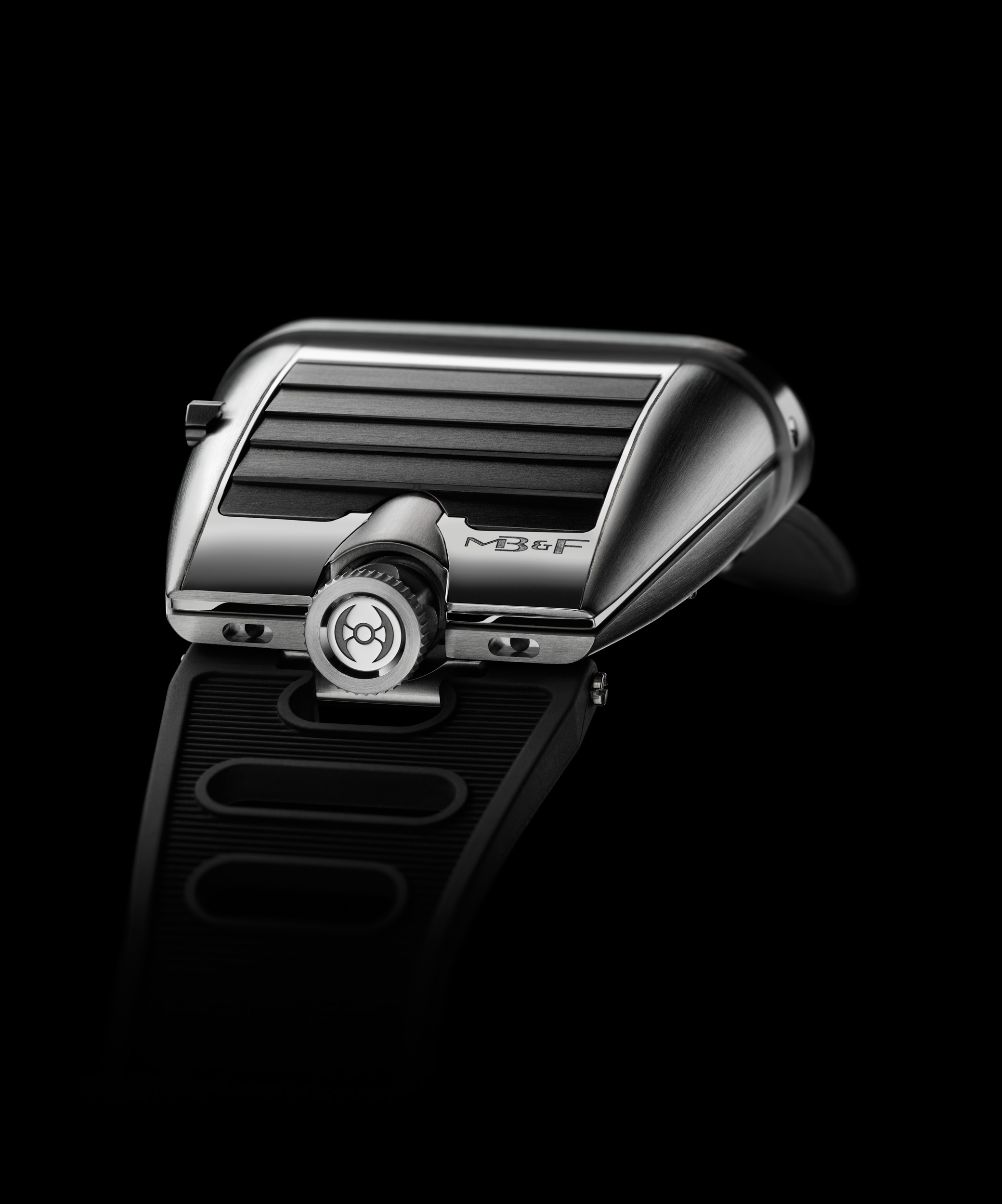 The silhouette of the HM5 is unmistakably inspired by the supercars of the 1960s and 1970s, especially with the angle and curve of the case. The louvre-like flaps, another visual tribute, allow a peep into the movement cased within. The “exhausts” at the back of the case may seem to be another cue taken from cars, actually serves a practical purpose. They allow any water that may flow into the watch case from the flaps to come out through the two exhaust holes. The prism sapphire, which reflects the horizontally placed hours and minutes discs to the vertical display, also serves to magnify the digits. 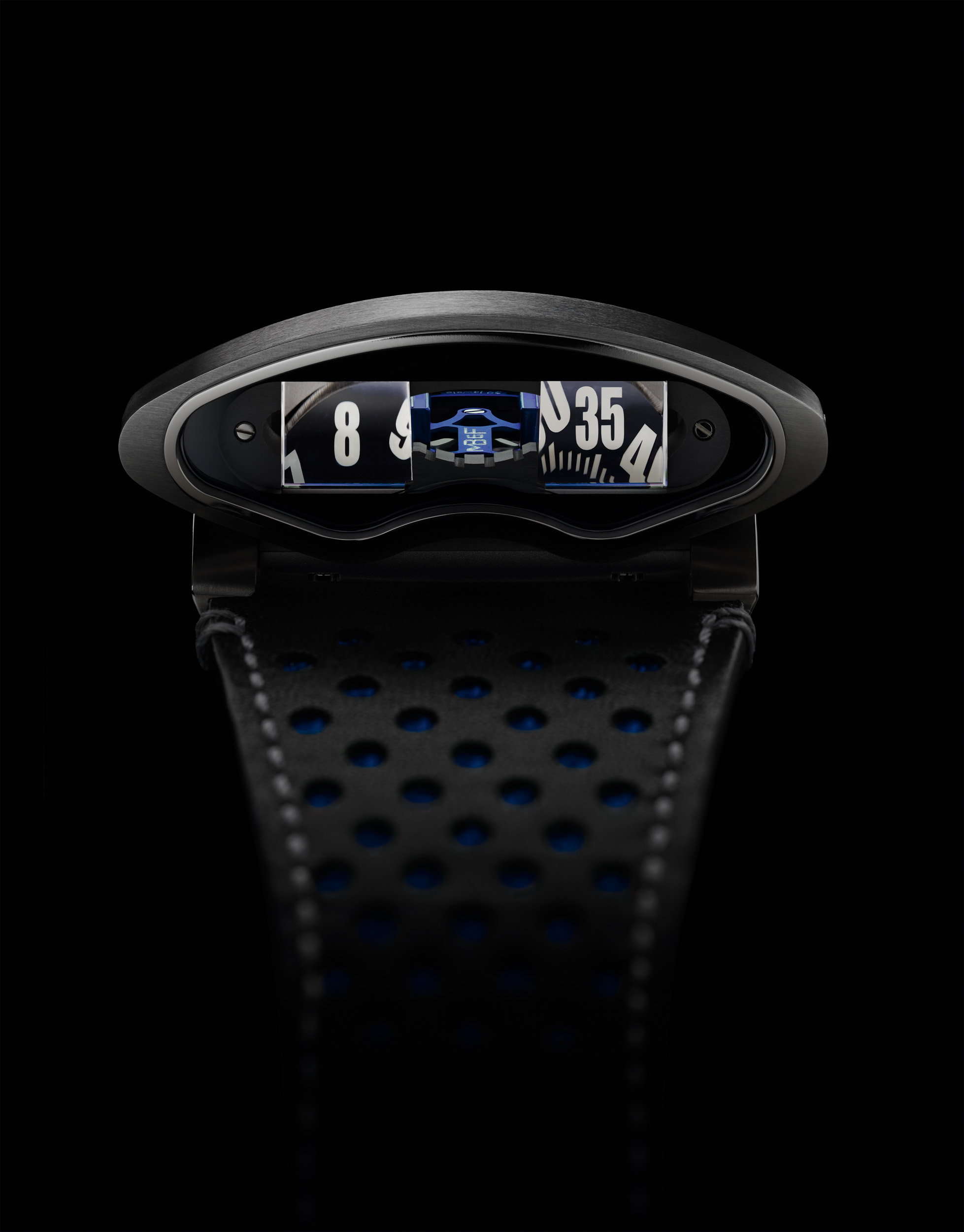 The look of the HMX is similarly evocative of supercars and driving watches. It takes the sapphire crystal prisms from the HM5, with a similar jumping hour trailing minute display discs, albeit powered by a different Sellita base movement. 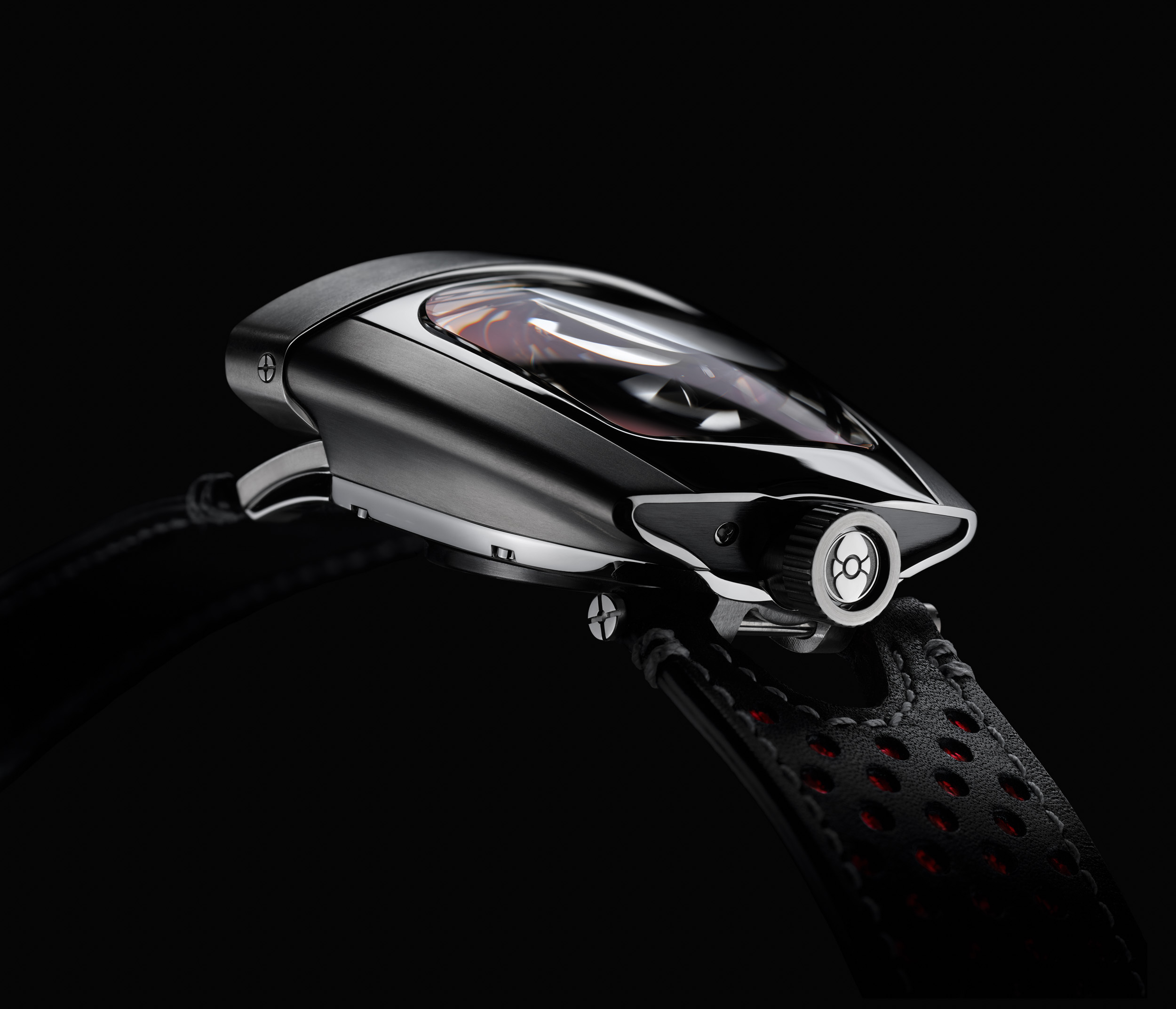 While the exhaust holes are gone, the single crown at the back of the case remains. The overall profile of the case is a more rounded, sleeker update to the HM5, reminiscent of how car design has evolved. 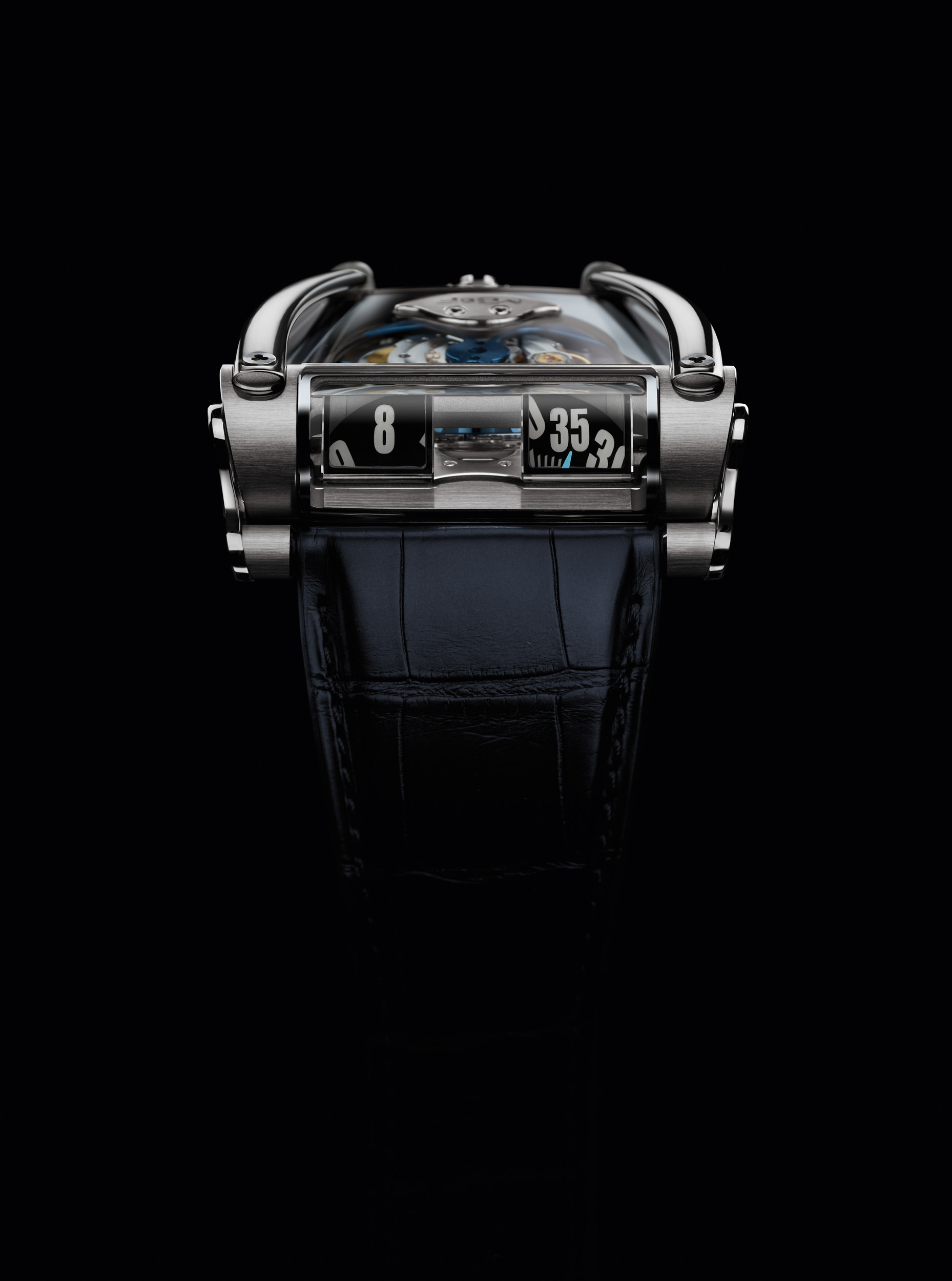 HM8 “Can-Am” is the most recent release of the driving watches. Again, the jumping hour and trailing minute discs are placed horizontally in the movement, reflected by two sapphire crystal prisms to a vertical display, continuing this design language. It is the most transparent of all the driving watches in the HM collection. 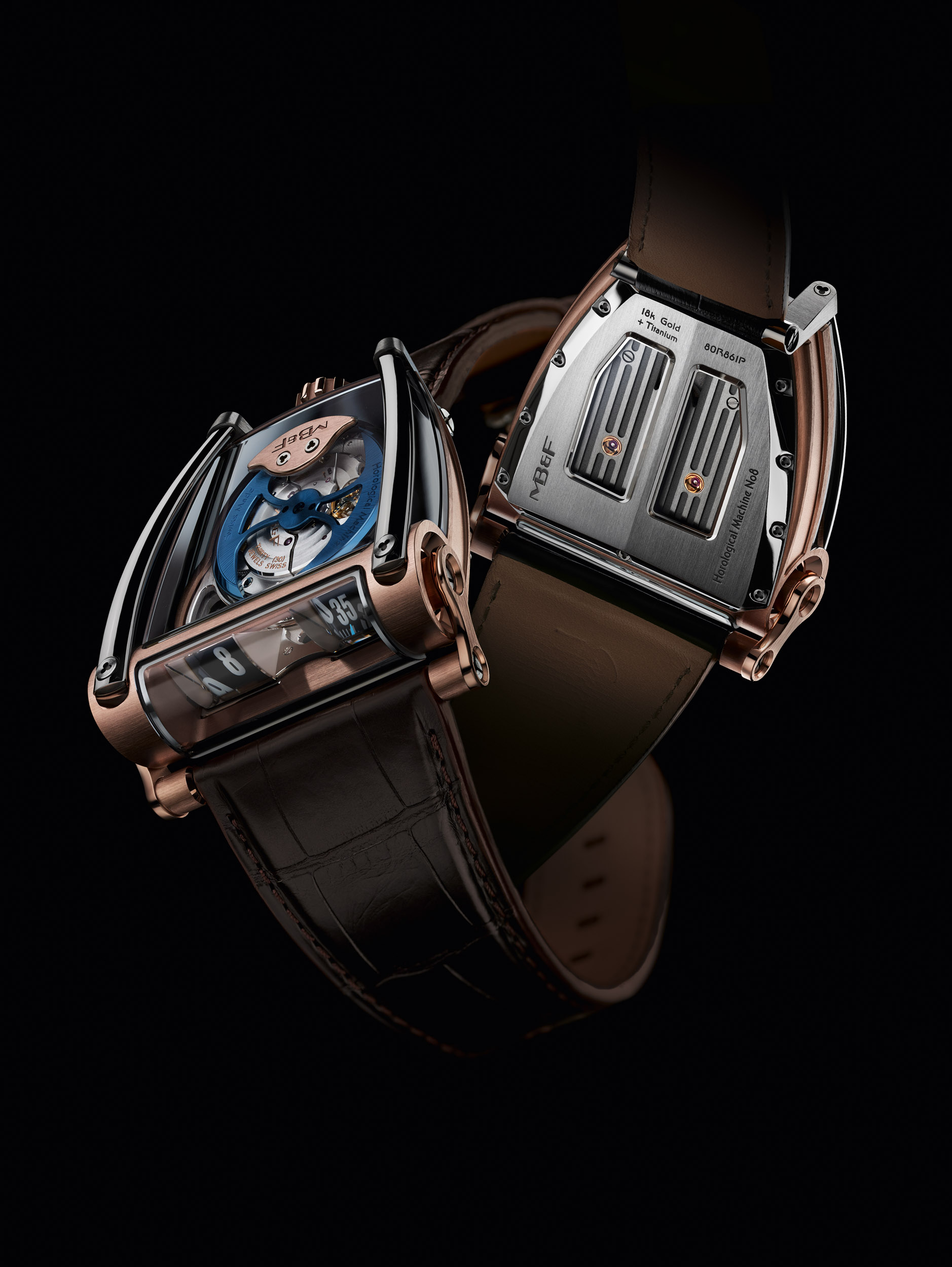 With sapphire crystal on the front, top, and bottom of the watch, the movement, the engine of this driving watch has nowhere to hide. The movement is based on the same Girard-Perregaux movement as the HM5. 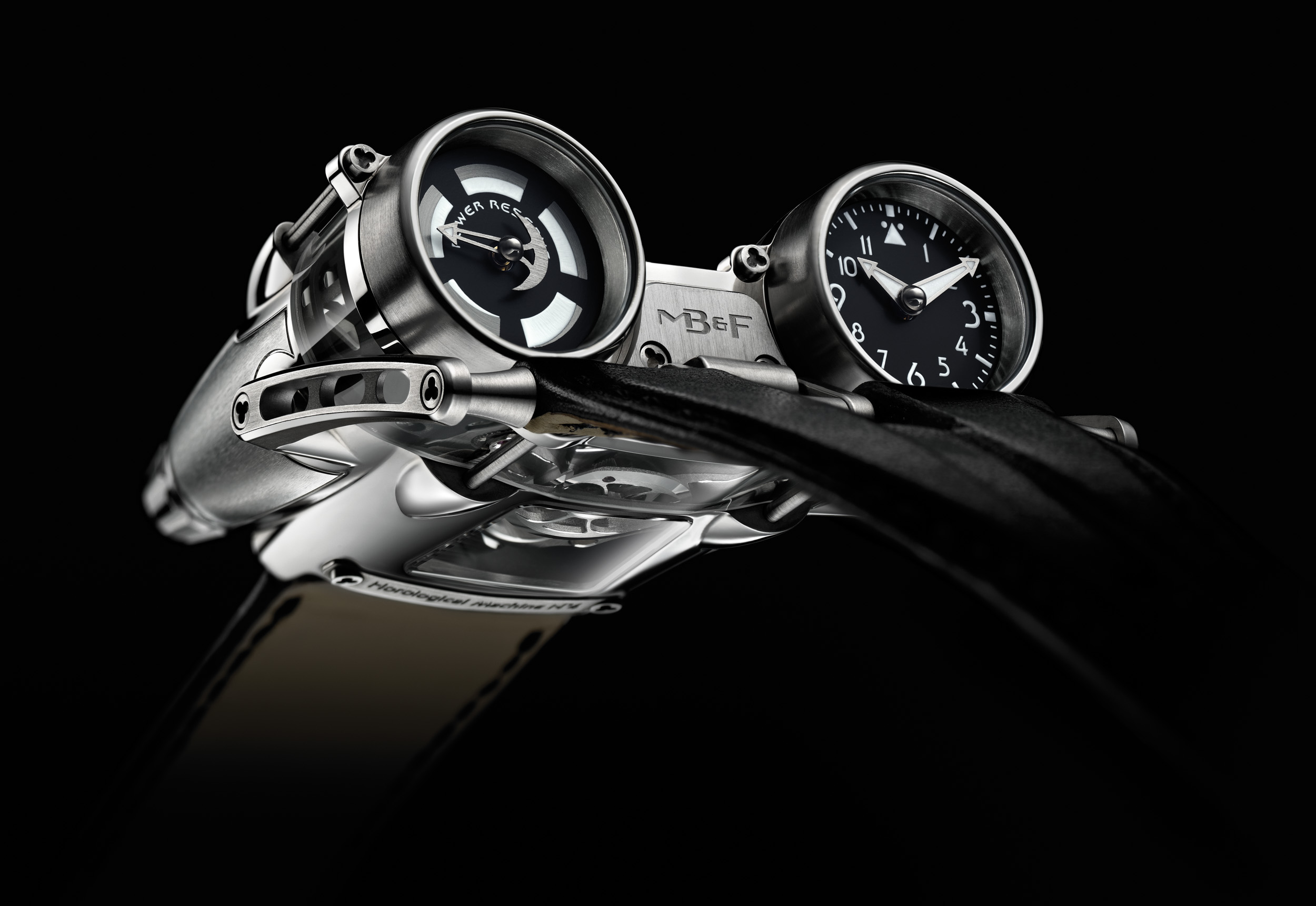 Reminiscent of plane turbines, the various iterations of the HM4 Thunderbolt have obvious aeronautical inspirations. The resemblance of the hoods housing the dials to jet turbines cannot be missed. With the left being the power reserve indicator and the right showing the time, the two dials are another visual reference to the various dials you might find in a cockpit. 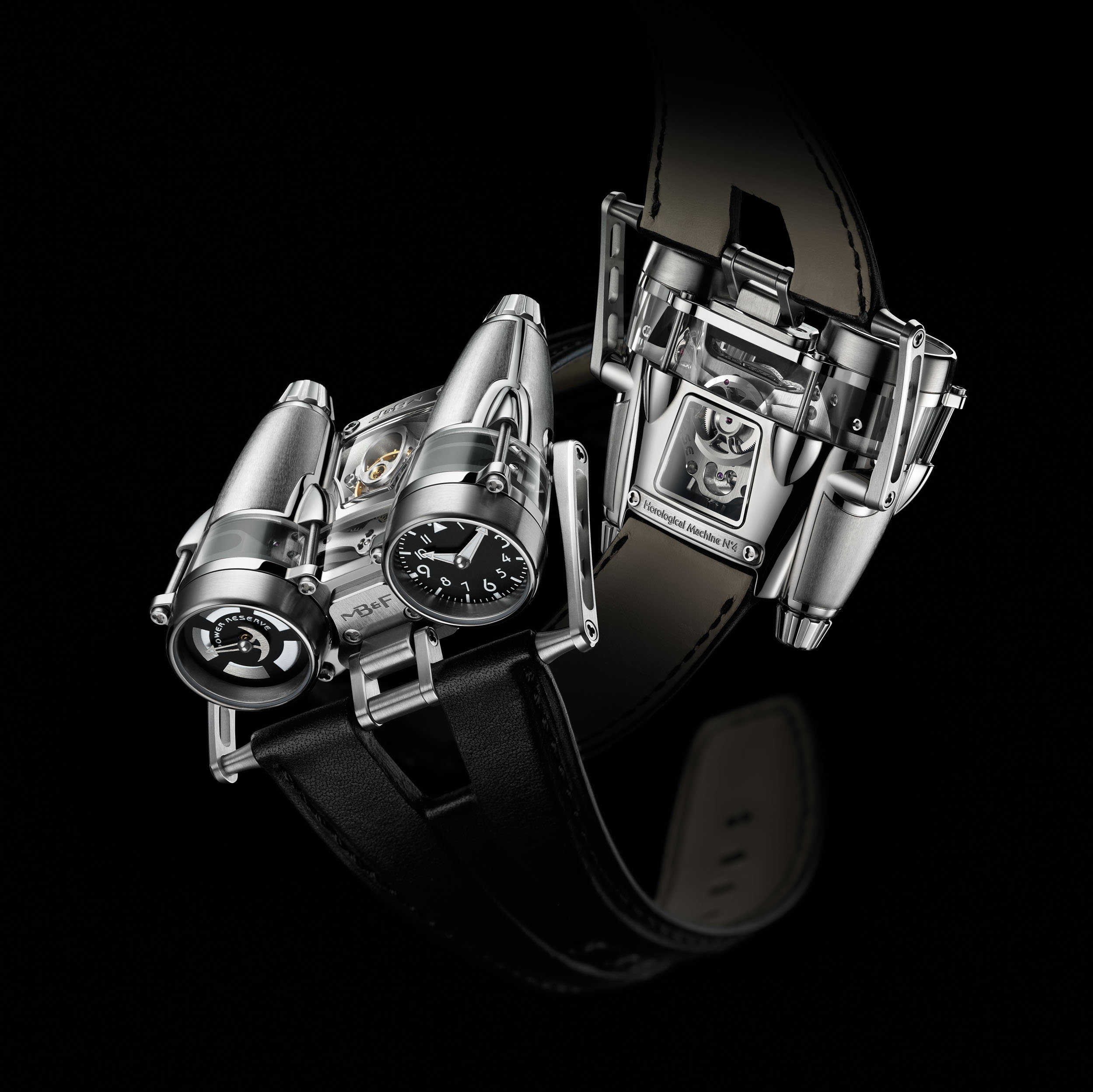 The HM9 Flow brings together the themes of cars and planes. Aerodynamics, a study important to both automobiles and aeronautics, is physically manifested in the curvilinear case form of the HM9. The two iterations, Air and Road, differ in dial design. 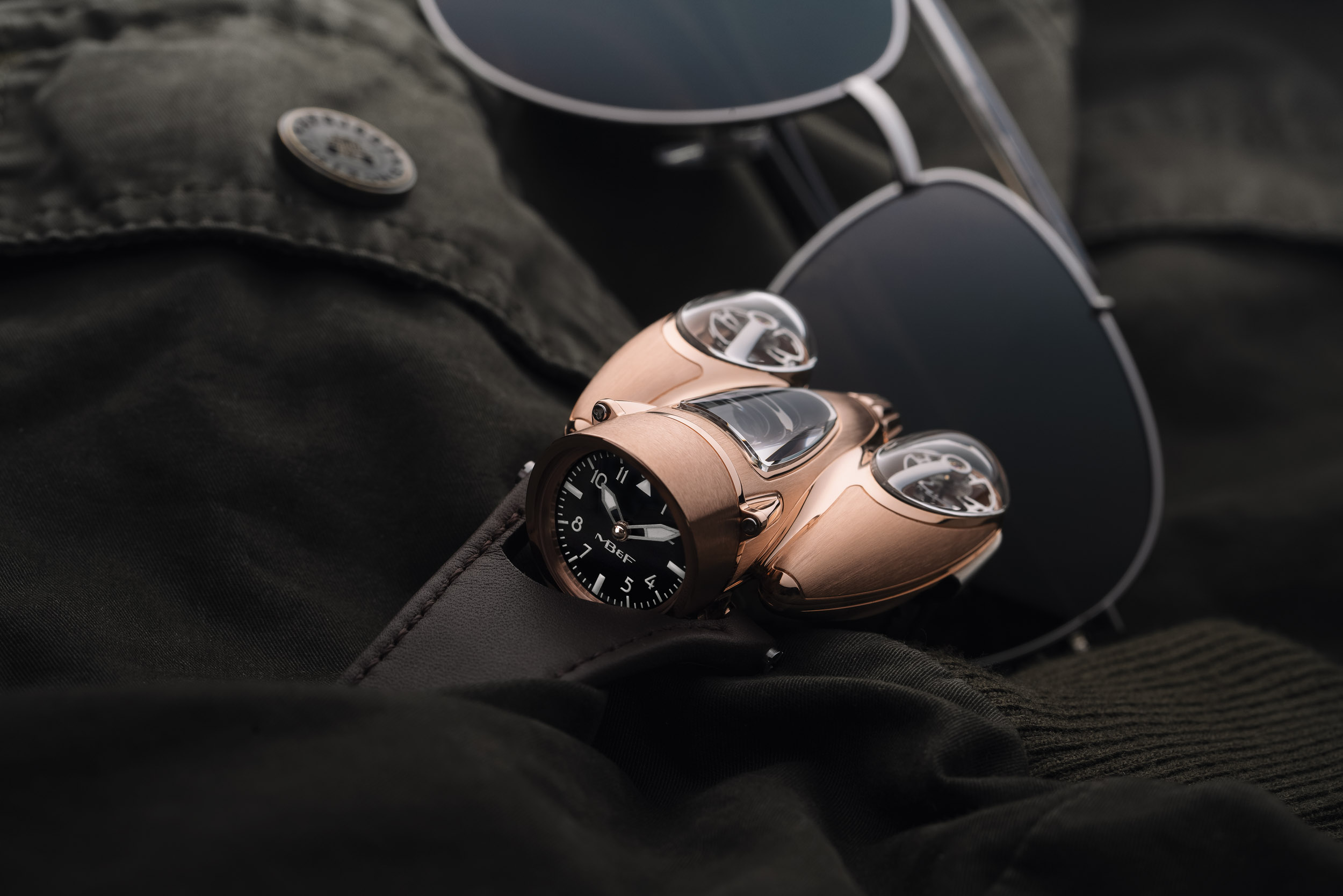 Air makes reference to B-Uhren dials from WWII, where, the numerical 12 marker is replaced by a triangle flanked by two dots. Road, on the other hand, has a vintage speedometer style dial. The two side pods which house the double balance with planetary differential, could either represent the jet turbines of a plane, or the rims and wheels of a car. 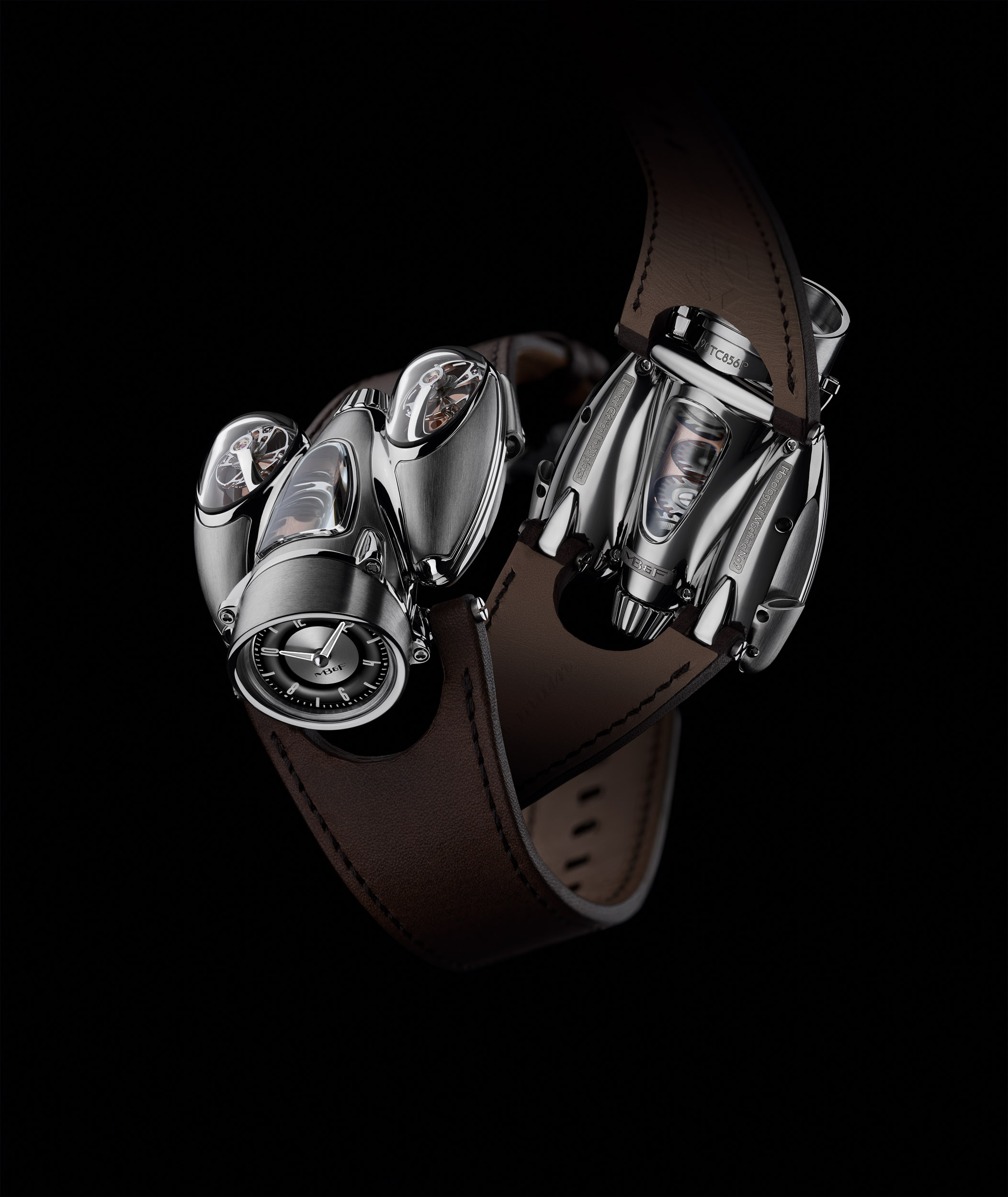 Just like the present is a product of history, we are inevitably products of our own pasts. There is a beauty in recognising how the past embeds itself, whether intentional or not, in present designs. And as demonstrated by these MB&F creations, it is very much possible to be creative and original while paying homage to history.