Created by the founder of Rolex, Hans Wildorf, Montres TUDOR S.A. was formed with the objective of combining aesthetics, performance and affordability.  A modern incarnation of Tudor’s iconic Submariner design, the current Black Bay family combines heritage with contemporary robustness. There is bound to be a watch in the Tudor Black Bay family for every collector. 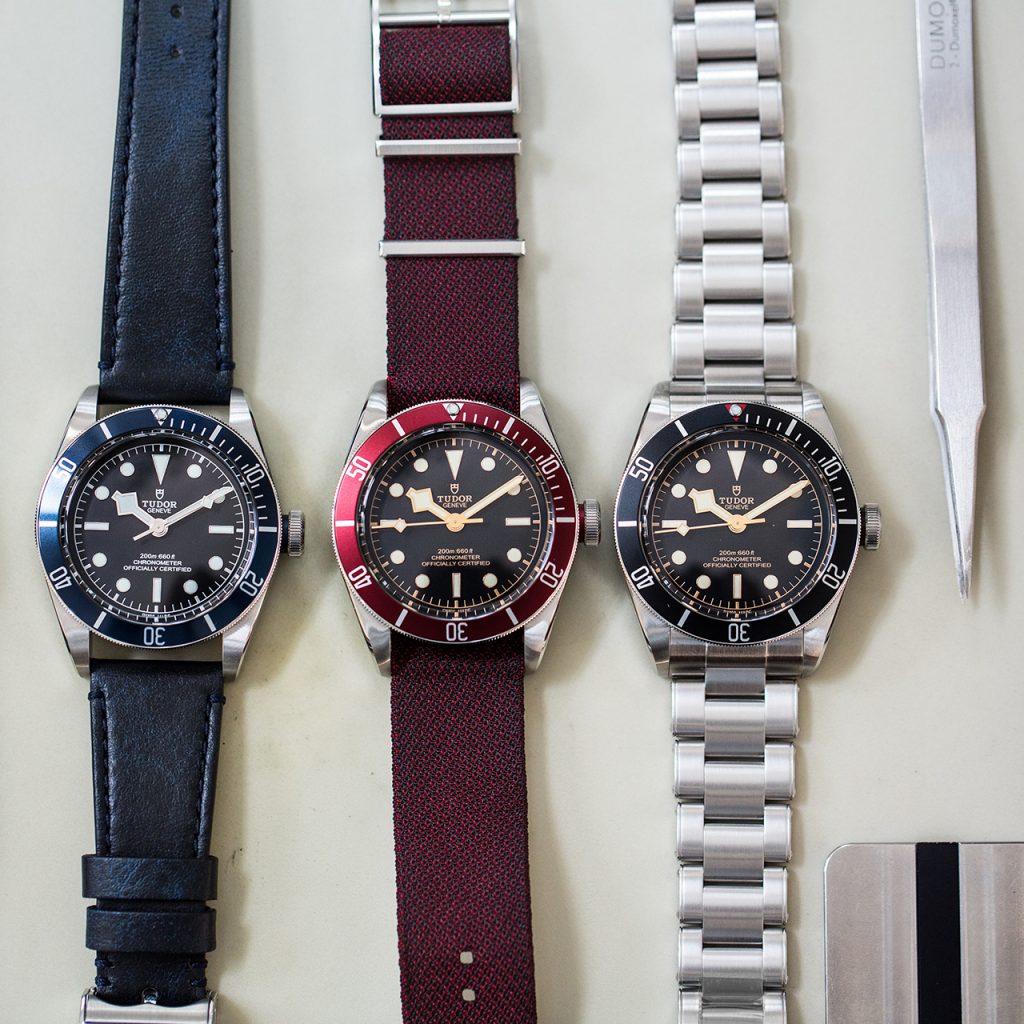 The Tudor rose, inscribed within a shield: this Tudor logo first appeared around 1936 and symbolized the invincible union of strength with grace. Tudor watches were, and are, known for being robust yet still retaining beauty in its lines.

In 1952, Tudor introduced the Oyster Prince, with the unique Oyster waterproof case and original self-winding Perpetual “rotor” mechanism – both features previously exclusive to Rolex. To show Tudor’s confidence in the strength, reliability, and precision of its products, 30 Tudor Oyster Princes travelled to Greenland in the two-year British North Greenland Expedition. In 1953, a new campaign saw Tudor Oyster Princes worn in extreme circumstances which emphasized the great durability of the watches.

The evolution of Tudor Oyster Prince continued in 1954, with the introduction of the Oyster Prince Submariner reference 7922. This first diving watch featured a case with a screw-down back, large luminous markers and hands for easy reading in deep water, and a bidirectional rotatable bezel graduated in 5-minute intervals for precise dive time measurement and adjustment of the decompression stages. The reference 7922 was the precursor to the Tudor military divers’ watches, which were delivered to various military organisations, including the French Marine Nationale and the US Navy. Neither custom-designed nor specially developed, the Tudor Submariner was chosen for its reliability and robustness, a testament to the standard and quality of the watches.

Launched in 2012, the Black Bay family of watches is the modern-day connection to the early roots of the Tudor brand. Functionality, reliability and design remain the key elements of this collection. Retaining the design cues from the Tudor Submariners, the Black Bay collection is distinguishable by the brand’s iconic Snowflake hands, domed sapphire crystal and oversized crown. 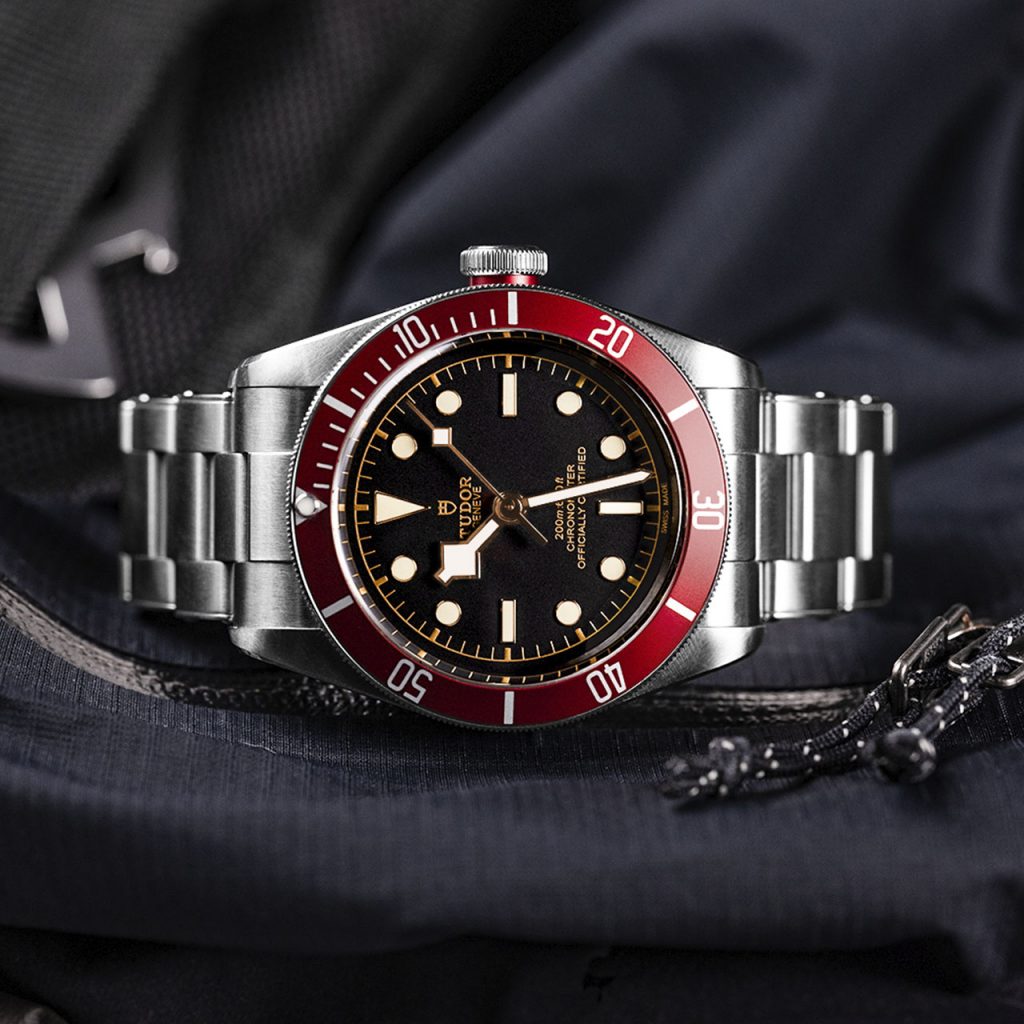 At the core of the Black Bay collection are the quintessential diver watches. The 41mm Black Bay models feature a black gilt dial with an array of coloured bezels, including blue, burgundy, and black. Powering the watch is the Manufacture Calibre MT5602, with a bi-directional winding rotor and 70 hours power reserve. Waterproof to 200m, it is ready to take on any underwater challenges with its owner.

The Black Bay Fifty-Eight, which was unveiled in 2018, is inspired by the brand’s first 200m diver’s watch. With a 39mm case, the watch is equipped with the Manufacture Calibre MT5402, boasting a 70 hours power reserve and waterproof up to 200m. 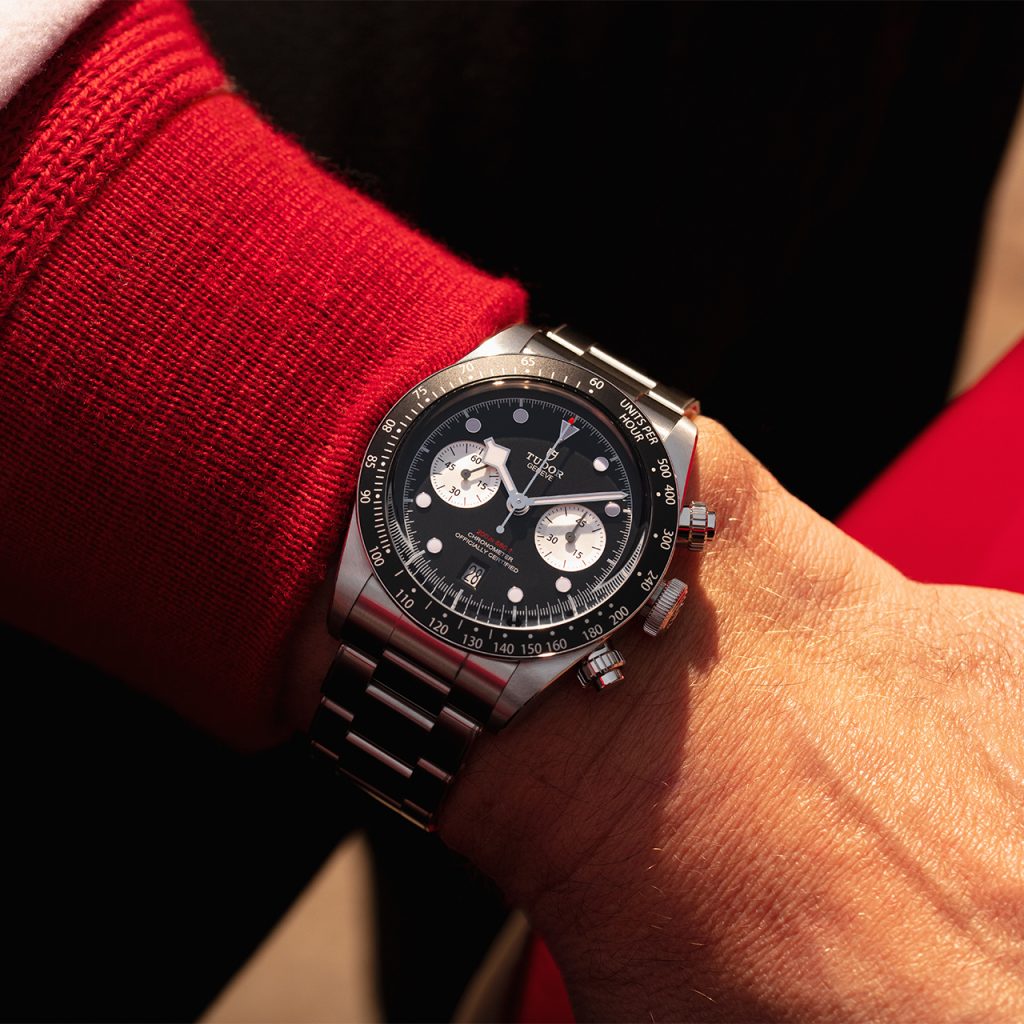 Reinterpreting the aesthetics of the Black Bay, the Black Bay Chrono reimagines the look of the classic diver in a chronograph form. Screw-down chronograph pushers accompany the familiar snowflake hands and case proportions, with a new tachymeter on the bezel.

The Black Bay GMT is perfect for the modern-day traveller. The 24-hour graduated rotating bezel in two colours and the independent GMT hand means the watch can show up to 3 different time zones. Inside the 41mm case is the Manufacture Calibre MT5652 automatic movement, with 70 hours power reserve.

Unveiled earlier this year is the Black Bay Pro. Available in steel, the 39mm case comes with a sleek brushed silver-tone fixed 24-hour bezel. The new Black Bay Pro is powered by the Manufacture Calibre MT5652 automatic movement, and waterproof to 200m. Compact, robust and sporty, this model boasts many unique aesthetic details and celebrates the spirit of the technical watches that TUDOR has produced for professionals throughout its history.

Since its creation by Hans Wilsdorf in 1926, and in line with his vision of an ideal watchmaking product, Tudor has never stopped producing the most robust, durable, reliable, and precise watches possible. Bolstered by this experience, and confident in the knowledge of the superior quality of its watches, Tudor offers a five-year guarantee on all its products. This guarantee does not require the watch to be registered, or any maintenance checks, and is transferable.