While it’s no easy task to pinpoint the exact origin of the wristwatch, Girard-Perregaux is definitely up there as one of the first makers of wrist-worn timekeepers. Tasked by the German Imperial Navy in 1880, after an officer reportedly complained of the difficulty of using a pocket watch during battle. In turn, Girard-Perregaux created a manually wound wristwatch with a chain wristband and a protective grid – shielding the fragile glass crystal from impact.

Fast forward to 2020. Rather than look towards the battlefield, Girard-Perregaux took inspiration from the night sky in designing the 1966 Orion Trilogy. A look closer at the dial options

What’s the first aspect on the watch that strikes you initially? Oh yes, those beautifully crafted dials that evoke memories of a simpler time. When looking at the night sky and not a screen was a thing.  So these dials, these romantic inducing dials, are made of a material called ‘adventurine’. Without trying (miserably) to sound like a gemologist, adventurine is a type of quartz that contains material compounds that glitter. Turn it into the face of a watch, and the result would be a beautiful dial that’s both subtle and lively the more you stare. Depending on which version you’re holding, in this case the steel or diamond-like carbon coating (DLC) example, the dial appears like a modern work of art. Put those down and hold the pink gold version, you would get warm vintage vibes.

Interested in the Orion 1966? Let us know, we’re here to assist! Alternatively pop by one of our many boutiques, we’d love to have a chat about Girard-Perregaux. 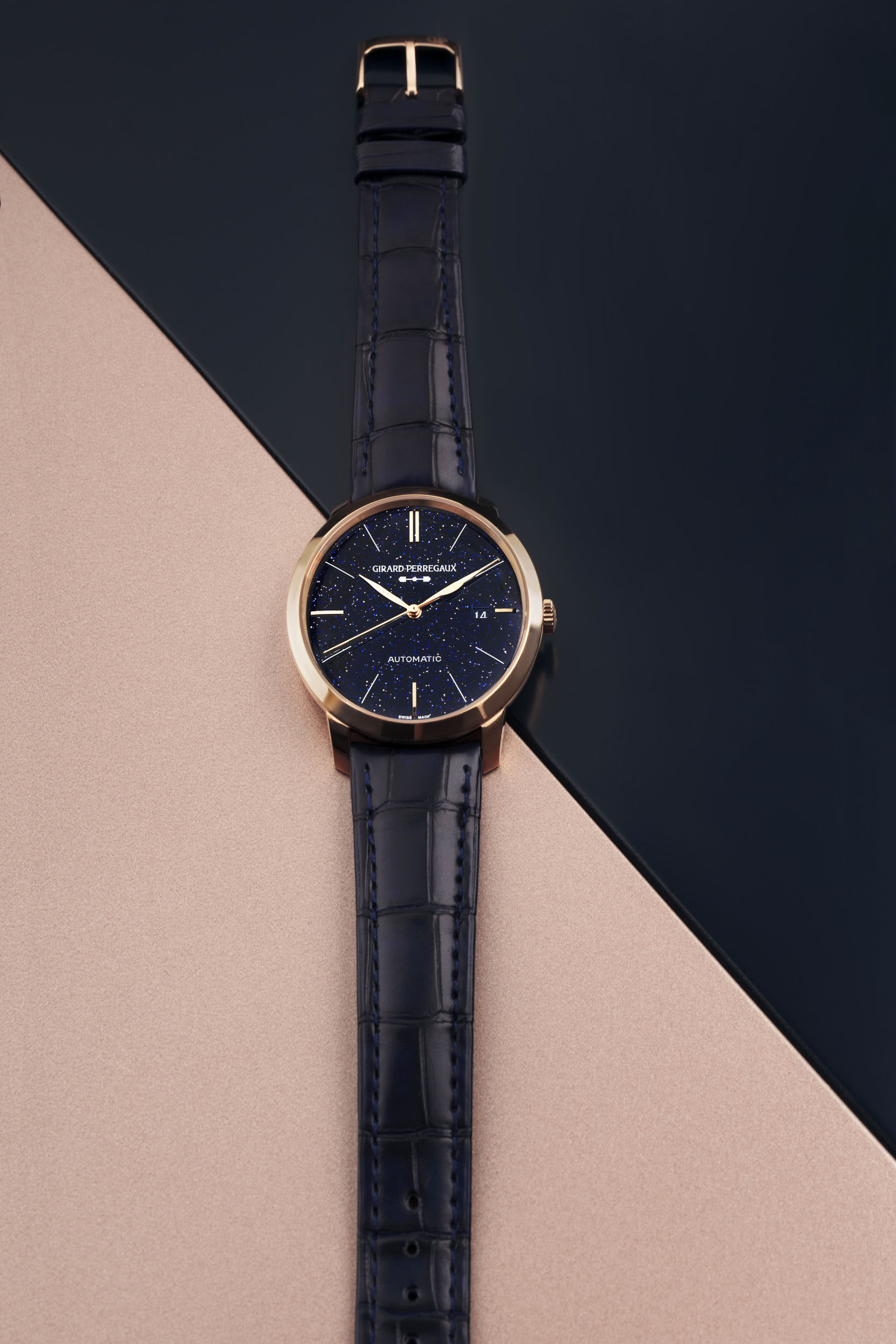 It’s important to note that all three models have the same design element. Long elegant indices with beautifully paired leaf hands. Girard-Perregaux obviously knew what they were doing here as using other traditional dress watch hands, say dauphine or baton hands, could result in something that is too harsh or may potentially clash with the romantic allure of the dial. As I mentioned earlier, the 1966 Orion Trilogy comes in three case variants which include steel, DLC and pink gold. For me personally, I dig both the steel and pink gold versions. However, the DLC model is just too cool to ignore. All variants come in a case size of 40 mm with an impressive 9.40 mm height. This in my opinion, makes it a true dress watch. Looking further into the design, the watch features a sapphire double anti-reflective, domed crystal that gives the watch some added depth. On the wrist, the alligator straps on both models complete the look and would pair with any dress shirt, polo or even a t-shirt if you’re a rule breaker (jokes, do what you want). One of the coolest features about the watch of course is the movement. One might think that due to the very thin profile of the watch, it’s most likely a hand winding movement. But oh no my friend, this bad boy houses a self-winding movement with a frequency of 28, 800 Vib/h and is only 3.35 mm tall! I know, nuts right? 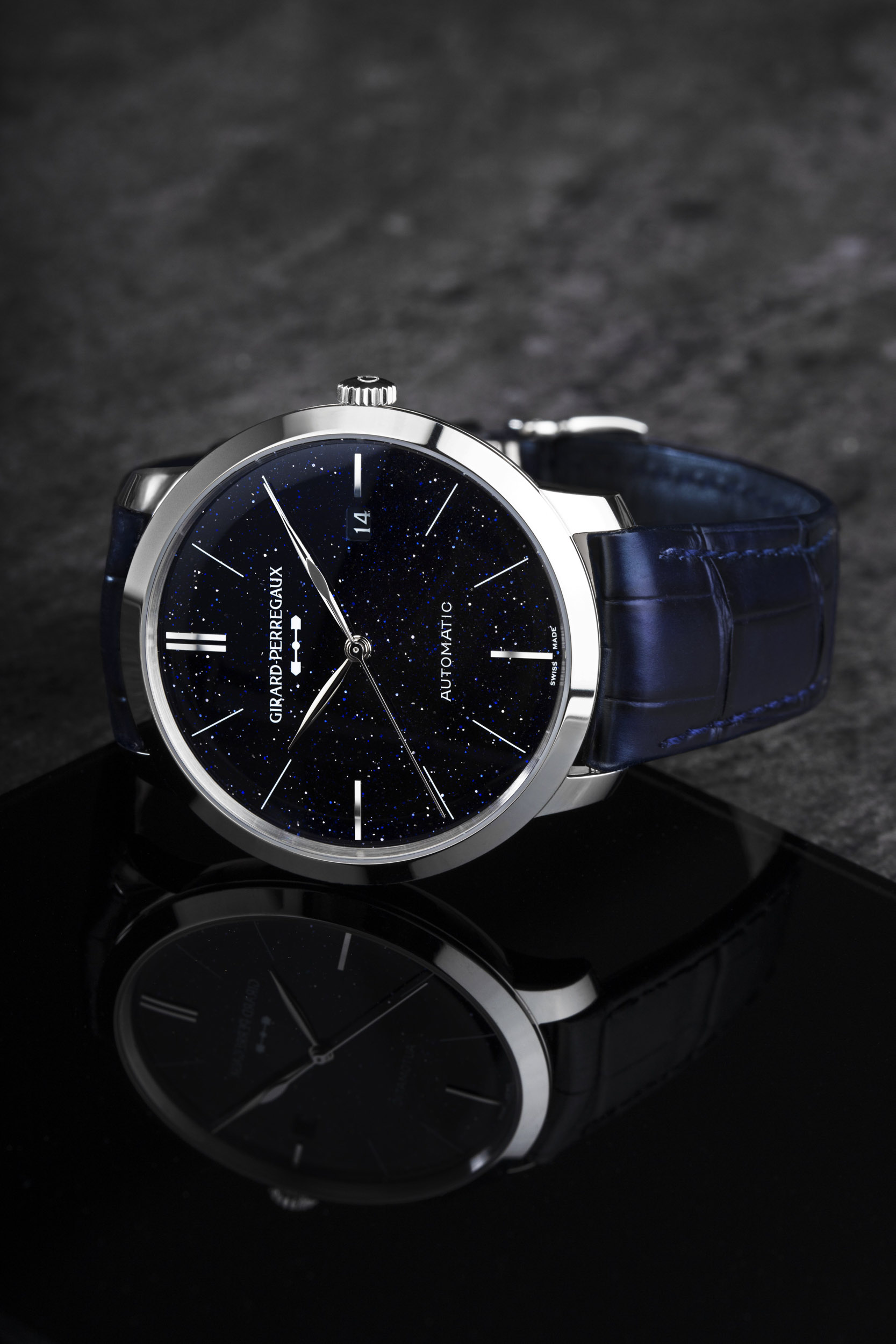 All three models are equally as gorgeous as its sibling. However, I will conclude with the opinion that although the design elements of each is similar, they offer very different vibes. See them in person, be amazed, and make that difficult decision based on how it looks on you, and your personal tastes.

Interested in the Orion 1966? Let us know, we’re here to assist! Alternatively pop by one of our many boutiques, we’d love to have a chat about Girard-Perregaux.