As far as men’s watches go, Hamilton’s Chrono-Matic 50 packs a mighty punch. With its elaborate interface, red accents and racing-inspired design, the new watch is a bold part of Hamilton’s current collection. But while the watch is no doubt striking, its aesthetic isn’t entirely unfamiliar; the Chrono-Matic 50 is actually a revamp of a 1972 Hamilton timepiece that bore similar details. The new version has been visually and mechanically updated for the modern wearer and introduced to the market with limited release: there are only 1,972 pieces available worldwide, and in Singapore the model is exclusive to Watches of Switzerland. So, what makes this limited-edition watch worth wearing? 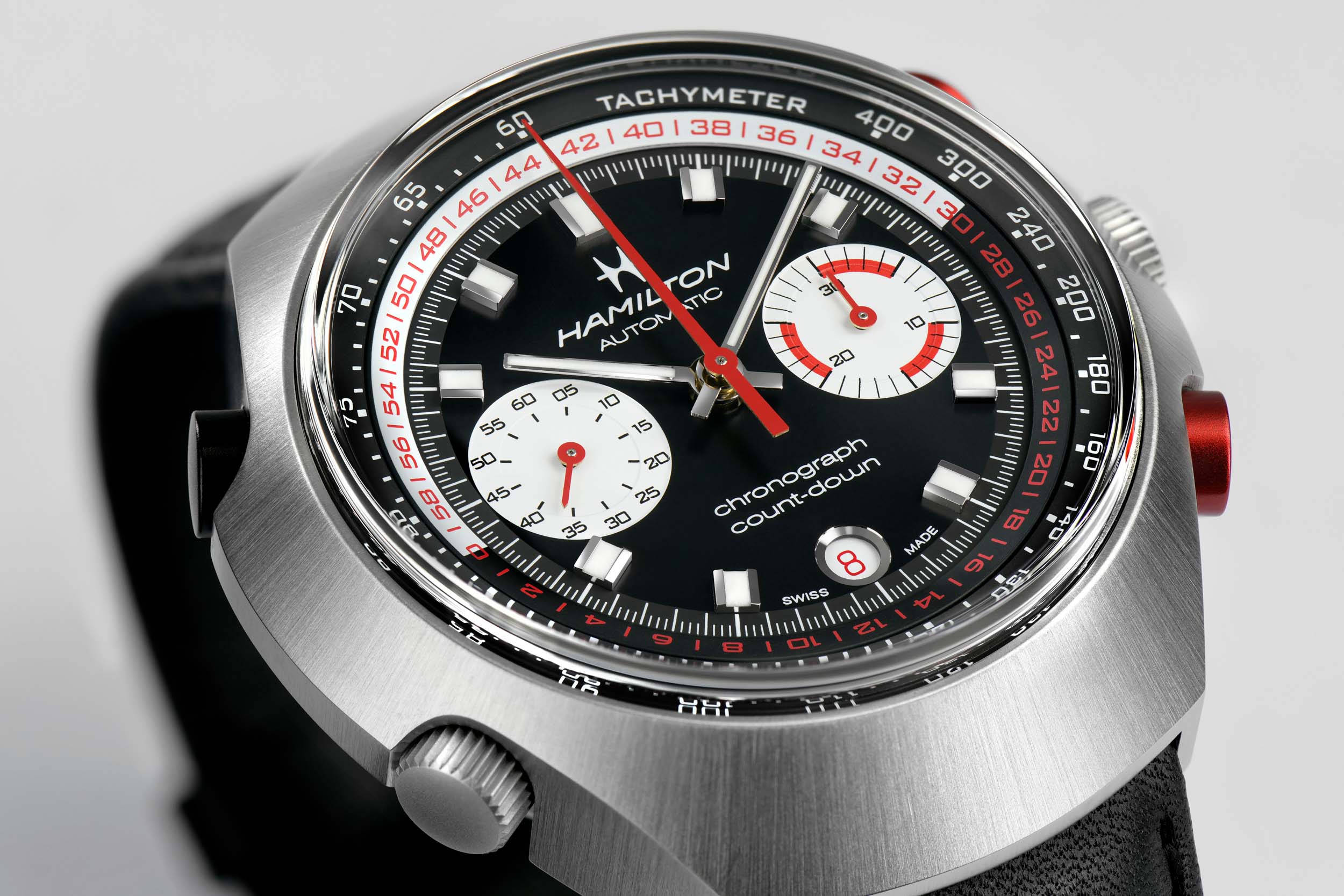 Interested in the Chrono-Matic 50? Let us know, we’re here to assist!

In the late 1960s, a group of watch manufacturers, including Hamilton, Breitling and Heuer, joined forces to develop a new movement that was revolutionary for its time: an automatic chronograph. In 1969, the watchmaking collective unveiled the aptly named ‘chronomatic’ movement. A few years later in 1972, Hamilton released the Chrono-Matic E – a watch that was daring but emblematic of its time. The Chrono-Matic E echoed the panache of the 1970s with its sporty look and colourful accents, and it marked a shift in Hamilton’s approach to design. It’s no surprise that the watch has since become a prized collector’s item. 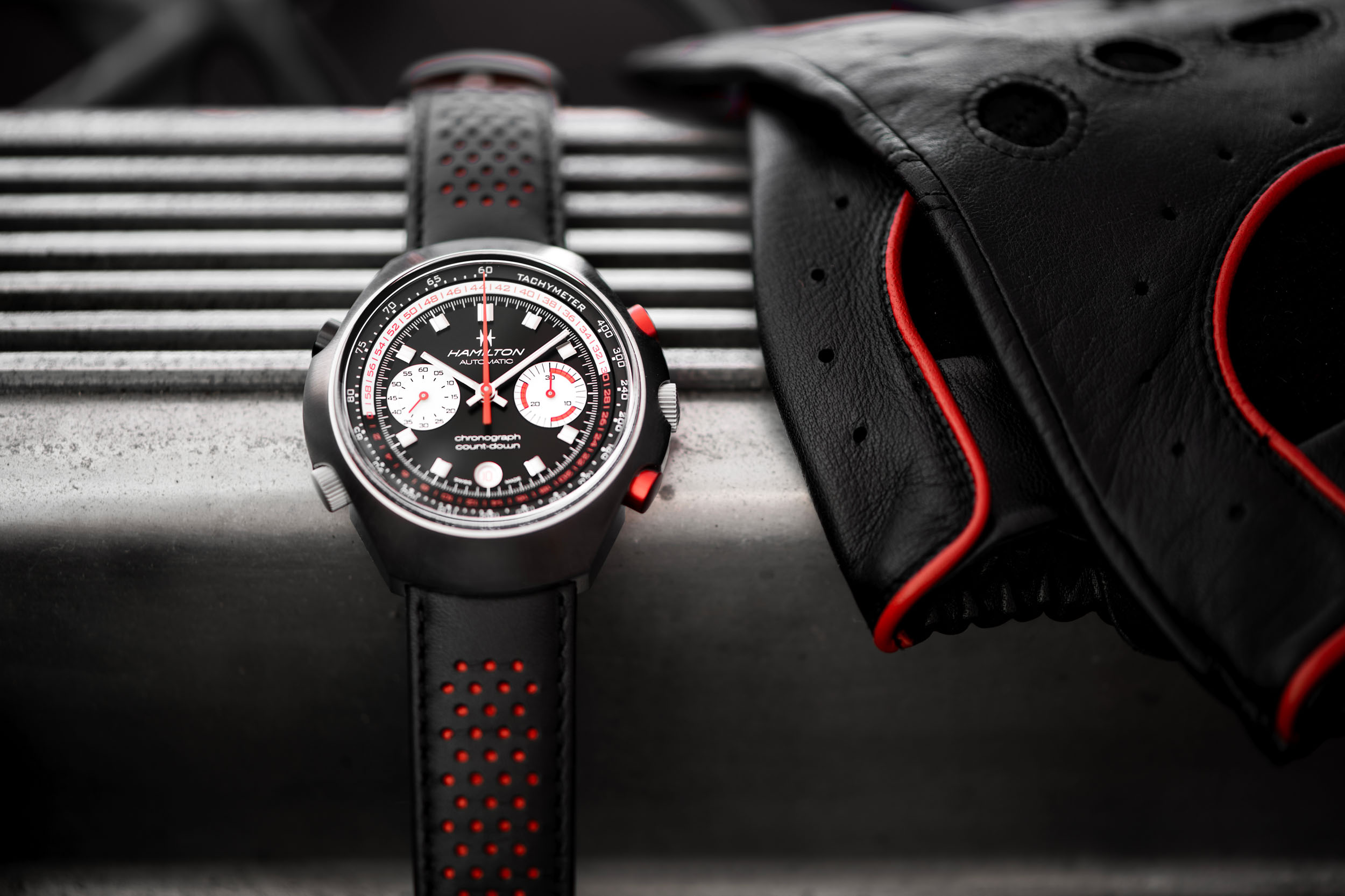 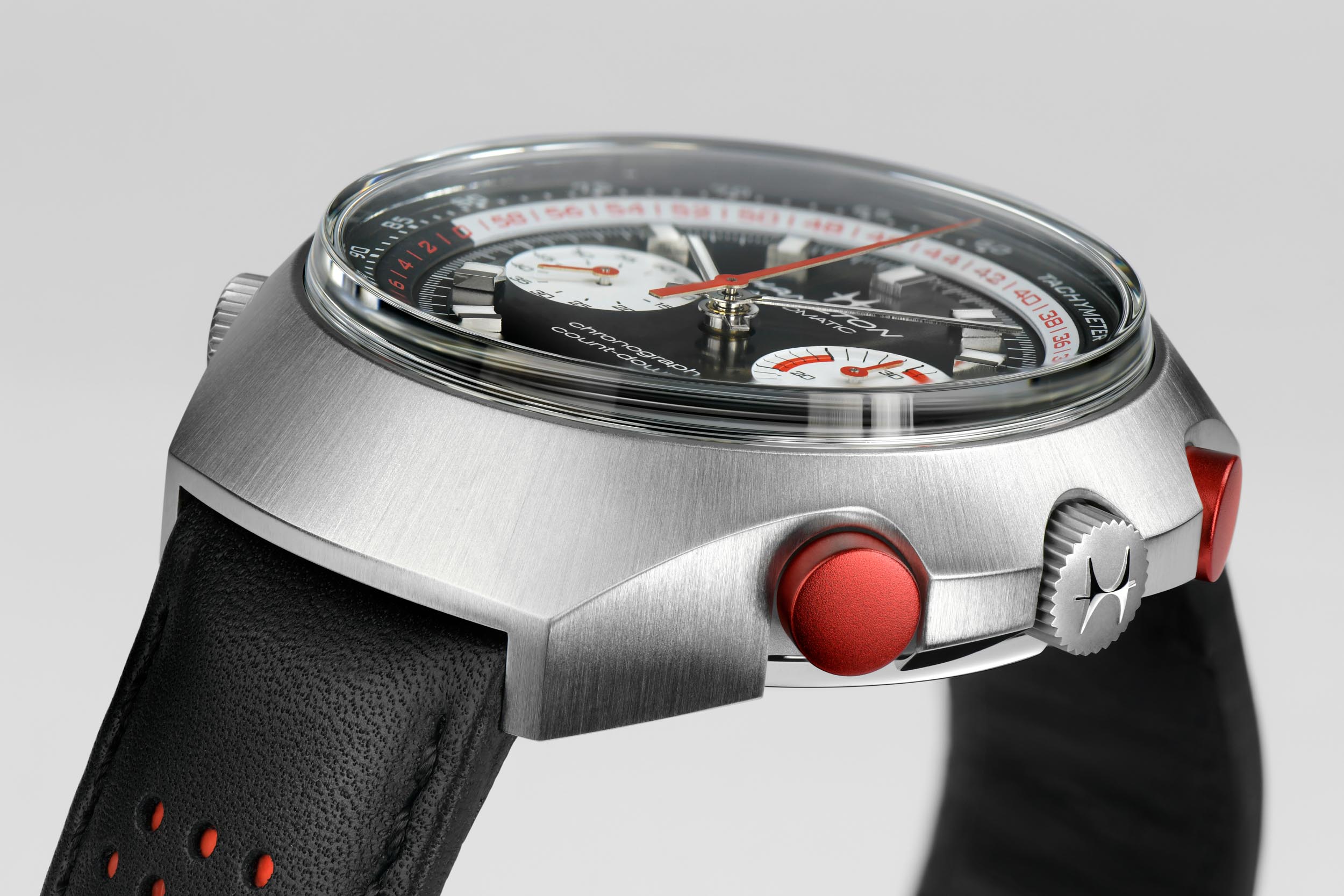 Those red accents are carried over to the Chrono-Matic 50’s perforated black strap, which reveals a red inlay (the original featured a simple black strap with contrasting white stitching). The interface is similarly laid out between the two watches, but the modern version’s functionality has been upgraded. The Chrono-Matic 50’s outer bezel is fitted with a tachymeter – replacing the Chrono-Matic E’s city ring, which indicated GMT – and an inner rotating countdown bezel. On the whole, the modifications to the contemporary Chrono-Matic lend the watch an even sportier and sharper look than its predecessor – its automotive aesthetic is thoroughly conspicuous. 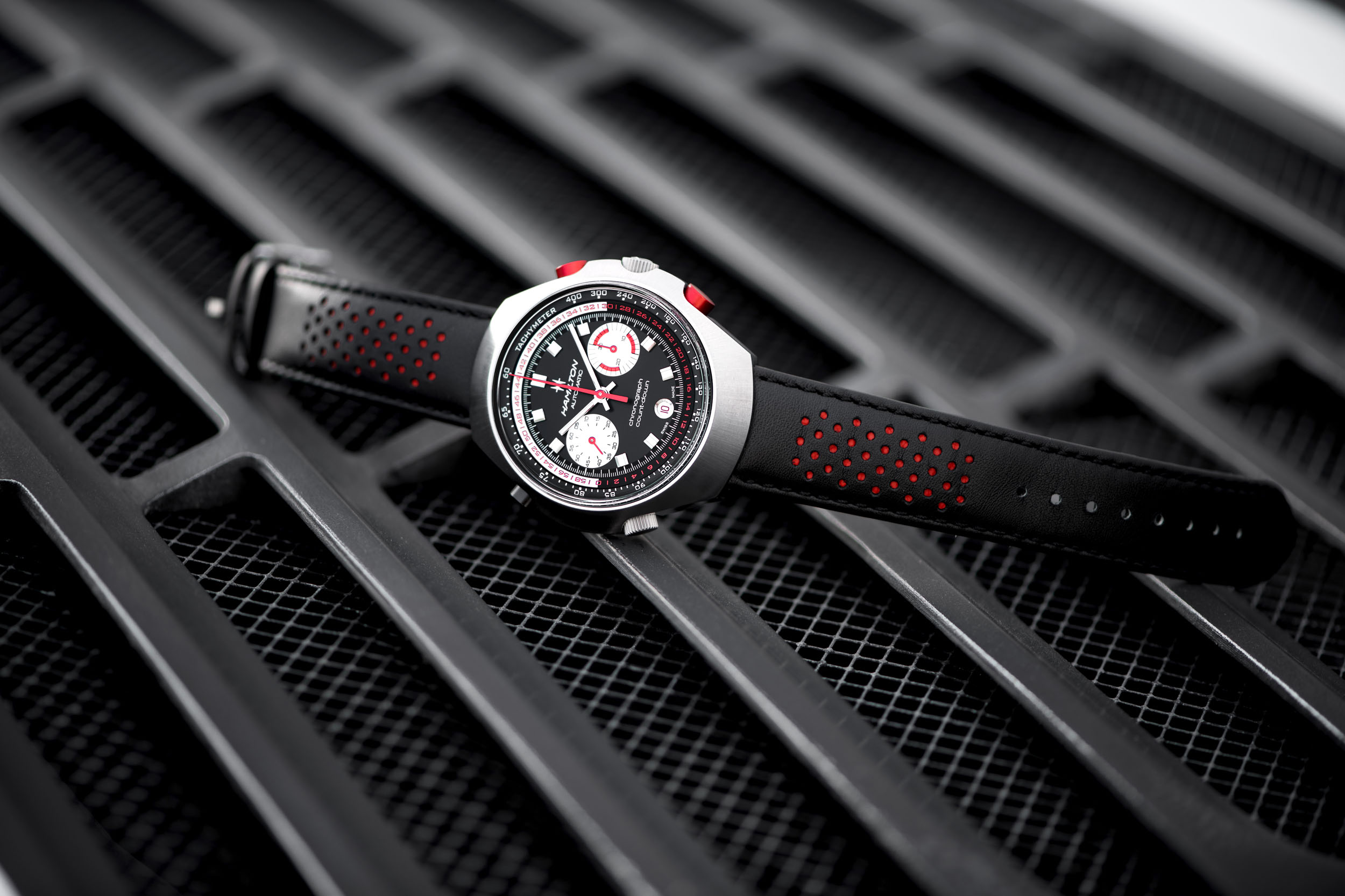 Naturally, the Chrono-Matic 50 has been updated with a modern and impeccably-made movement: the in-house H-31 Automatic. The automatic movement is based on the ETA/Valjoux 7753 and offers 27 jewels, hand-winding, hacking, pusher-set date, frequency of 28,800 bph, and a rather impressive power reserve of 60 hours. The watch is also water-resistant to 100 metres. 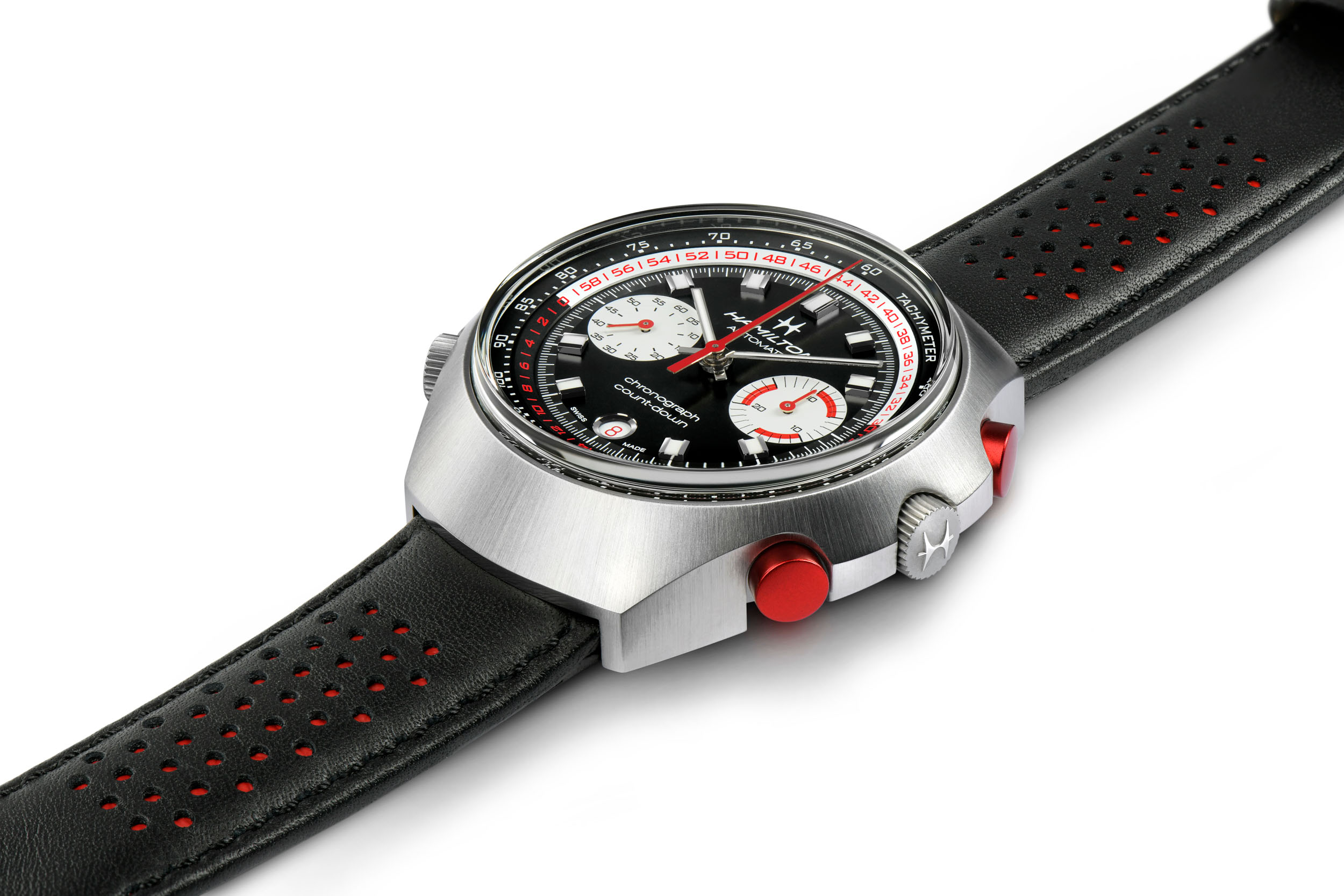