The Patek Philippe Alarm Travel Time 5520P incorporates a new grand complication which adds a 24-hour alarm to its elusive Travel Time display thanks to a new self-winding mechanical movement which was registered for 4 new patents. Once the alarm finishes counting down, a hammer strikes a gong to produce an acoustically-pleasing chime with a perfect cadence. Once struck, the gong “circles the movement for up to 40 seconds with a frequency of 2.5Hz. This intricate process is fully visible from the timepiece’s display caseback. To better appreciate this grand (pun intended) inclusion of an alarm feature, perhaps it is useful to dwell a bit further back into the history of the Patek Philippe Calatrava Pilot Travel Time 5524G which is the foundation for the 5520P. 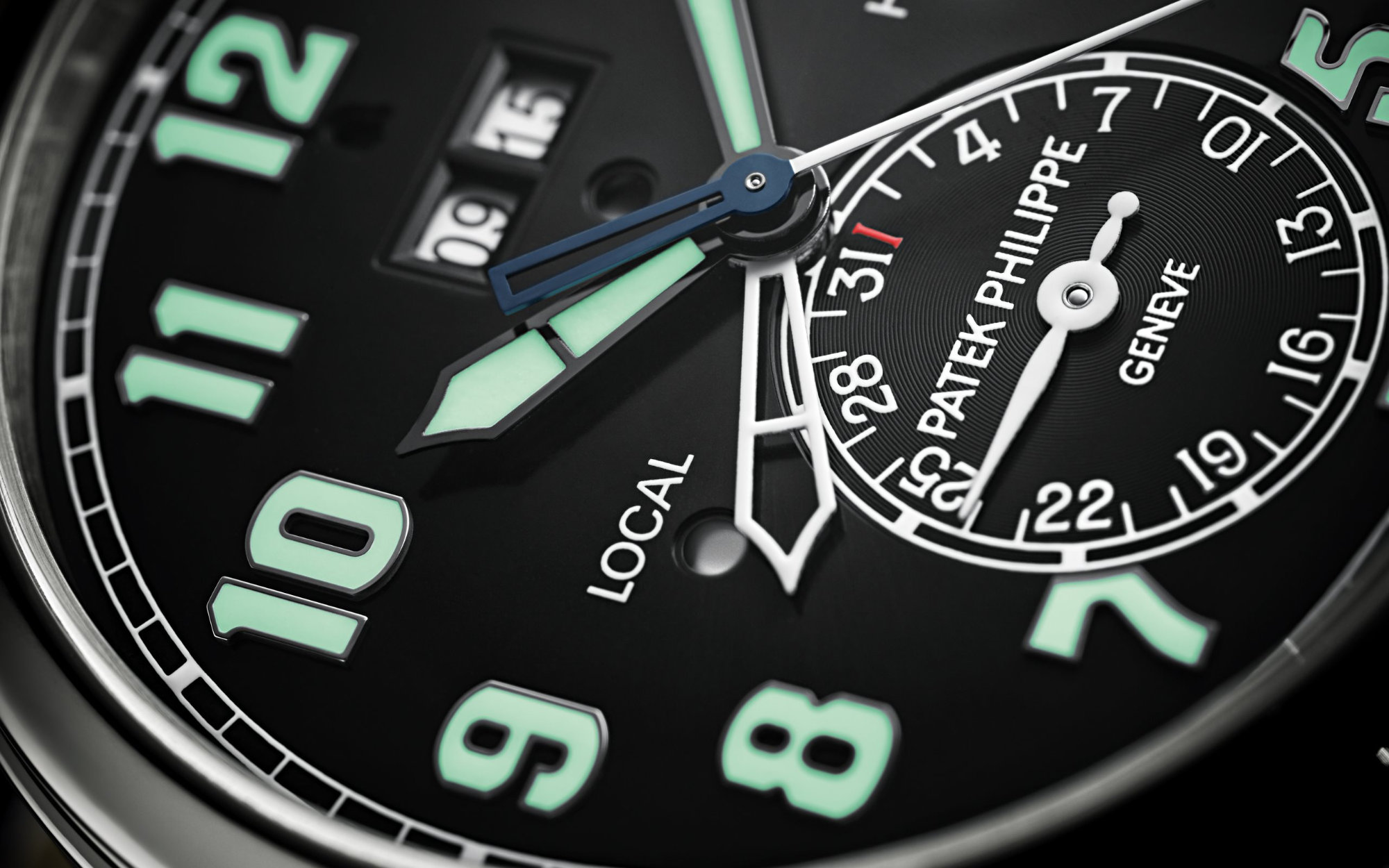 The 5524G, introduced in 2015, was very unexpected and intriguing as its design approach steered away from most of the other Patek Philippe’s contemporaries of the time. With large and bold luminous Arabic hour markers, a significant legible characteristic of pilot’s watches, Patek Philippe seemed to be headed for the spirit of aviation. Although it may appear as if Patek is foraying into the world of pilot’s watches for the first time, it is not the case as the brand seemed to have experience with manufacturing pilot watches before, as evident from their ‘hour-angle’ watches of the 1930s that were equipped with “splittable hour seconds”.

Nevertheless, the 5524G utilises a 42mm white gold case with 2 pushers on the left and one on the right. Packed with the Calibre CH 324 S C FUS like the Aquanaut and Travel Time Chronograph, the left crowns control the second time zone which is indicated by the skeletonised, white hand. Present on the subtle matte-blue dial is a subdial which displays the date, while 2 circular cut-out apertures help to indicate whether it is day or night for both local and home time zones. As alluded to by its name, the Travel Time is indeed a very practical watch for the cosmopolitan traveller.

In 2018, Patek released the 5524R which is the same watch in all intents and purposes except for some aesthetic changes. The dial is now a deep-brown sunburst and the case material was changed to rose gold. The harmonious coupling of these 2 aesthetic changes altered the “feel” previously produced by the 5524G; so much so that it feels like a completely different watch. The 5524R appears more warm and glamorous compared to the clinical and austere vibes of the 5524G.

Fast forward to 2019 and to the release of the 5520P, you can see how different it is in comparison to the 5524G/R, its predecessors. A significant change is in the new AL 30-660 S C FUS movement which as mentioned previously, contains 4 new patents and has a built-in alarm mechanism. Because of the new alarm feature, there is an addition of a pusher at the top right of the case, bringing the number of pushers on the watch from 3 to 4. However, the watch now appears more balanced because of it, as each pusher’s position corresponds to another on the opposite end, compared to previously where the watch seems offset towards the left.

The new pusher helps to operate the alarm setting, which is indicated digitally on an aperture on the black dial below 12 o’clock. The aperture has a bell aperture above it, signalling that the alarm is on when the bell turns white. Below the digital display aperture is a circular aperture which turns white or blue depending on whether the alarm time is from 6 am to 6 pm or from 6 pm to 6 am respectively. Also, the case is now in platinum, resulting in a significant bump in price. Notably, the 5520P is Patek Philippe’s first chiming timepiece with a water-resistant case.

Despite the controversial release of the 5524G in 2015, the 5520P displays Patek Philippe’s relentless quest and dedication in perfecting and elevating its current range of watches, while strongly adhering to their philosophy of making highly functional watches with designs that can strongly withstand the test of time. The Pilot Travel Time is here to stay and to continue to serve as a statement for the brand. 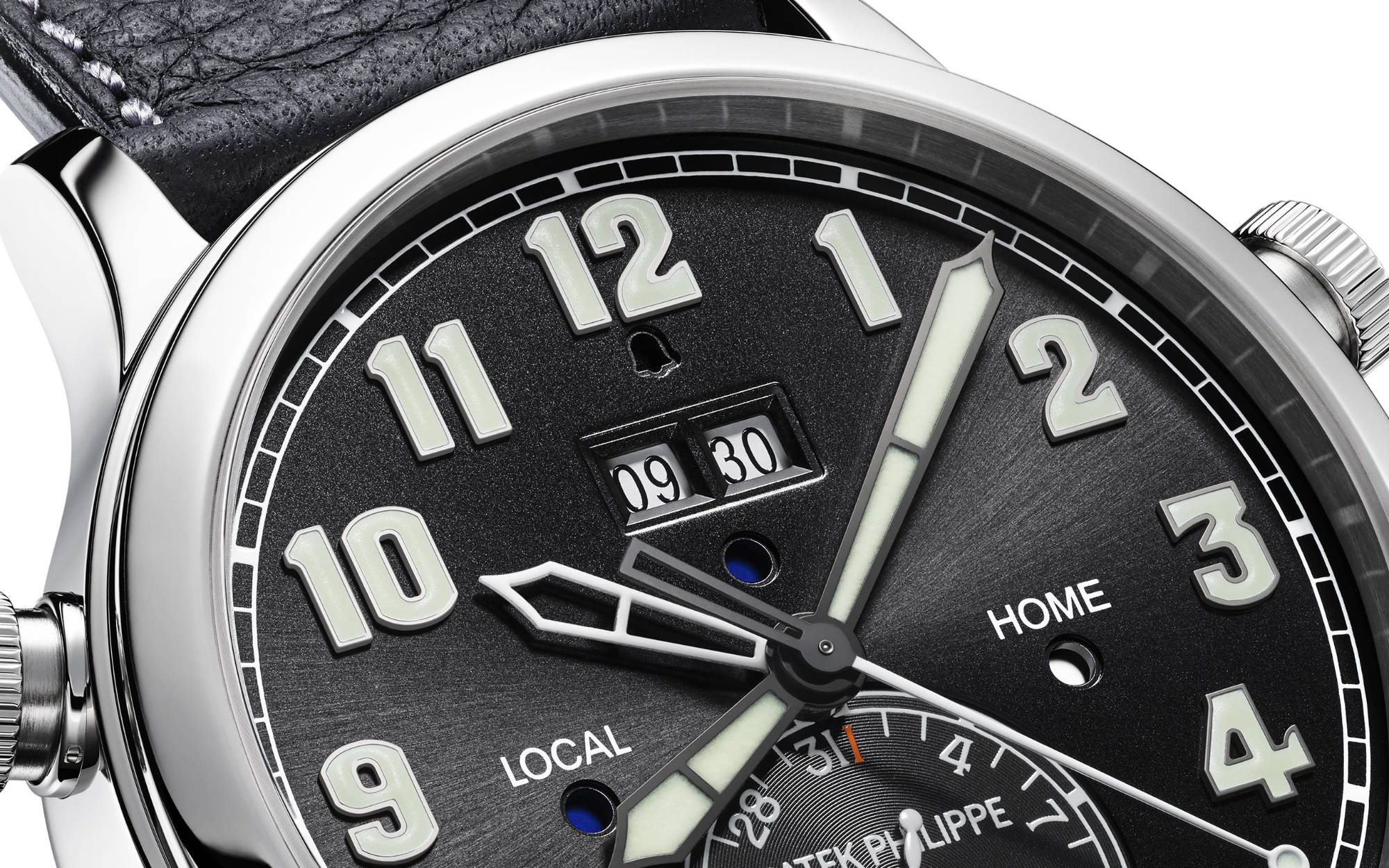