Regarded as the greatest watchmaker in the world today, a recipient of the Order of the British Empire, and protégé to the great Dr George Daniels. Roger W. Smith is all of the above. And he hand-makes watches from his studio on the Isle of Man, inside a converted tractor shed not far from where his mentor and master, the renowned inventor of the Co-axial escapement, Dr George Daniels made his watches.

Roger Smith makes no secret of the fact that during his early years of schooling, he had little to no interest in the curriculum. He always had an aptitude for the mechanical, but the tedium of a regular education just wasn’t for the young Smith. And so, at the age of 16, he enrolled in a course at the Manchester School of Horology.

Suddenly something clicked, and a lifelong quest for excellence in watchmaking began. 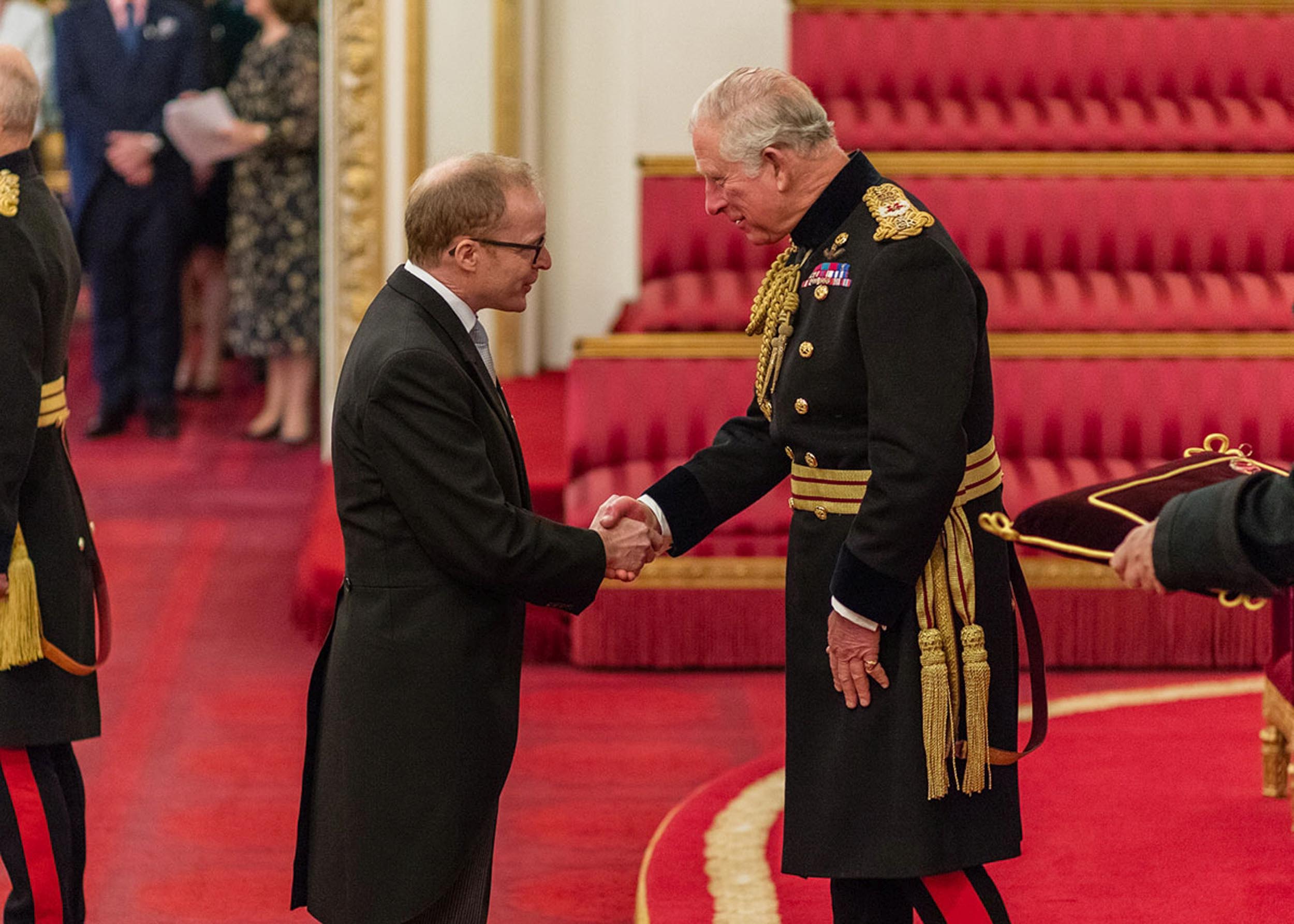 In fact, Smith has said that it was during a lecture at the school in 1987, delivered by guest speaker Dr George Daniels, that his passion for hand-made watchmaking was born. After spotting a gold chain tucked into Dr Daniels waistcoat, Smith garnered up the courage and asked to see what was attached to the other side, and it was then that Daniels revealed his hand-made Space Traveller pocket watch.

Inspired, Smith later wrote to Daniels asking if he could apprentice with the master watchmaker. Unfortunately, Daniels declined. However, he did encourage Smith to pursue his dream.

And so, Smith began to hand-make his first pocket watch. Taking 18 months to complete the watch, he then travelled to the Isle of Man to present it to Dr Daniels. But alas, much to his disappointment, while the pocket watch functioned, Daniels explained that it looked too ‘handmade’ and not ‘created’, he needed to try again.

Nevertheless, Smith refused to fail, and another five and a half years passed while he worked and reworked on creating his second pocket watch. Learning as much as he could from Daniels’ highly regarded and appropriately named book “Watchmaking”. He spent his days tirelessly mastering all 32 skills and techniques requisite in creating a watch in its entirety with only one’s hands. A process that is commonly recognised as “The Daniels Method” of watchmaking. And returned to the Isle of Man with his second pocket watch in hand. Which, upon inspection, finally passed the master’s test.

Shortly after, in 1998, Daniels asked Smith to collaborate with him on making the Daniels Millennium series of watches. And Smith finally understood, Daniels wasn’t in need of an apprentice, but rather of someone who shared his passion and skills. Leading to an experience that Smith describes as “attending the finest finishing school he could have wished for” and ultimately to a partnership that remains today, despite George Daniels passing in October 2011.

After having completed the Millennium series Roger Smith then established his own namesake studio in 2001, where he continued to complete Daniels’ order books, producing the Daniels Anniversary Watch – a series of 35 watches numbered to commemorate the 35th anniversary of the invention of the Co-axial escapement by George Daniels. While also designing and making his very own. Employing 8 other watchmakers with a goal of delivering between 10 to 13 watches a year.

Those numbers may seem low, but to achieve the level of excellence that Roger Smith is now known for, and with each and every component entirely designed and made from scratch in the studio, they are actually quite an achievement. Everything, from the bridges and balances of the movement, to the cases, the dials, the hands, and even the tiniest of jewels and screws are made entirely in-house from raw materials. And as a result, the watches that Roger W Smith produce are some finest and most sought-after examples of hand-made watchmaking in the world today. 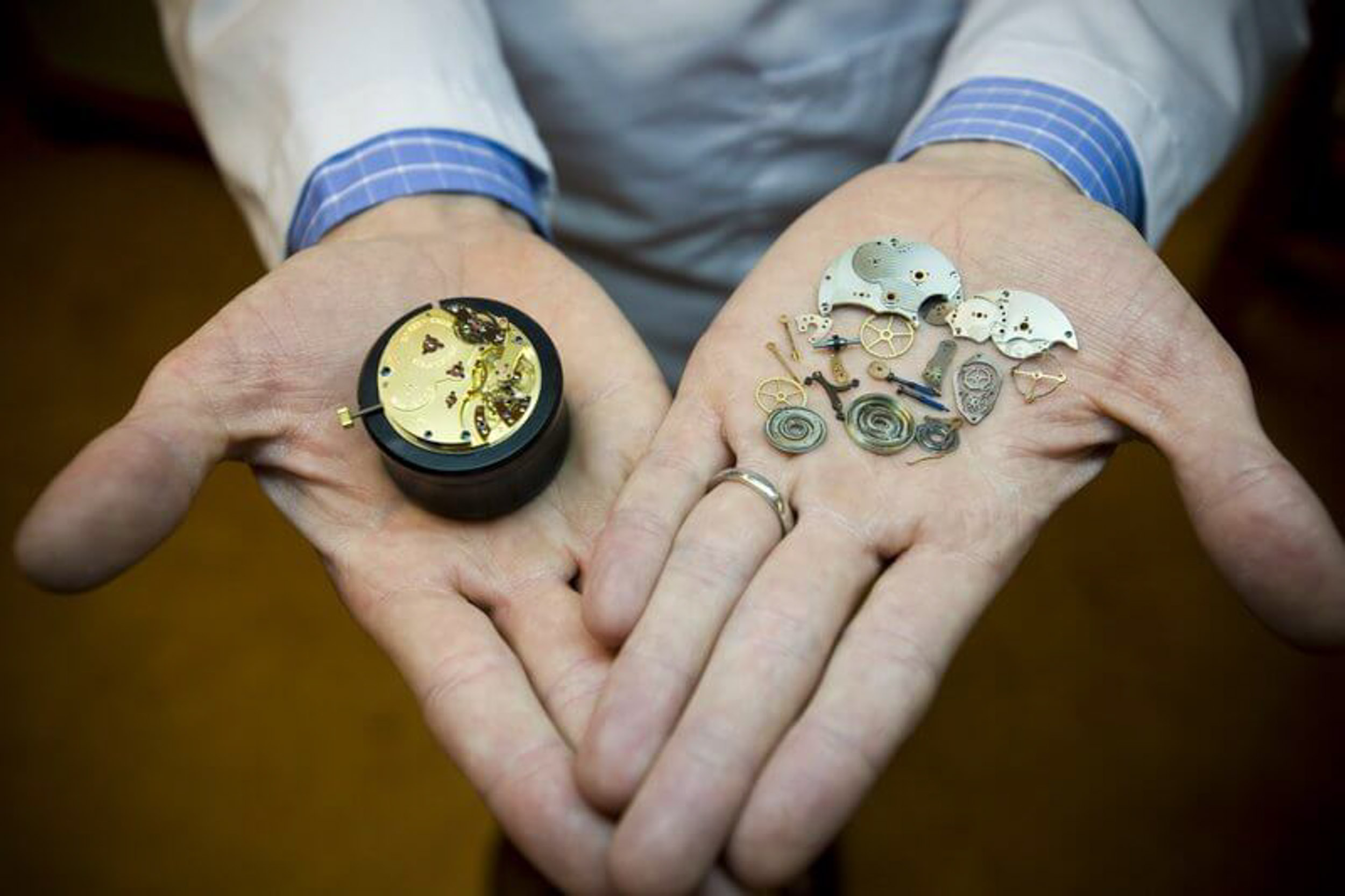 A Collection of Hand-made Watches from the Isle of Man

Being the first of anything is always going to be an incredibly important thing, and it’s no different for the very first watch ever produced by Roger W Smith after establishing his studio. First introduced in 2001, the original Series 1 was produced in a run of 9 individual watches. Using a traditional lever escapement, as well as certain other components from Switzerland, it featured a rectangular case with retrograde date display. 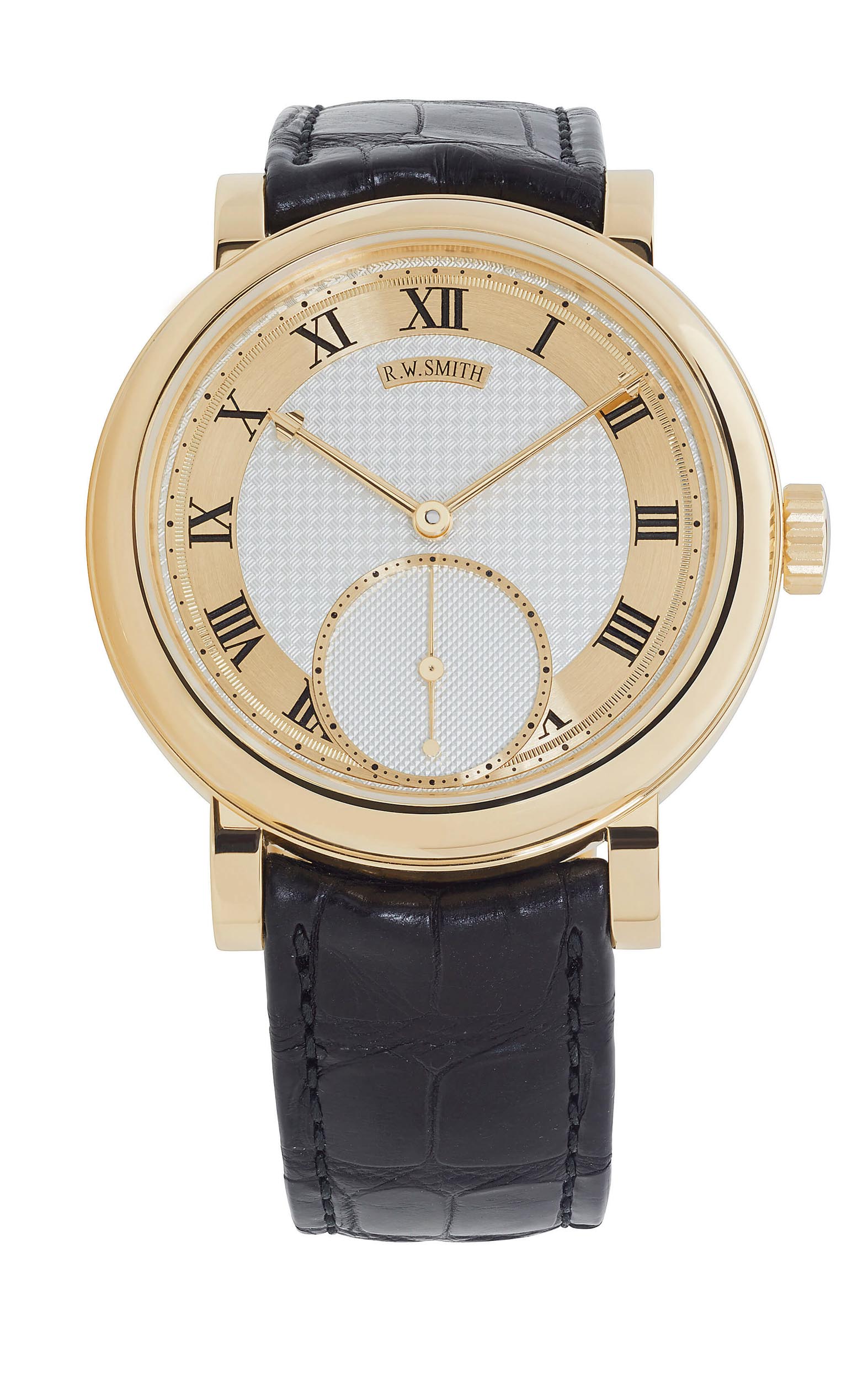 However, in 2015, Roger Smith announced his intention to produce the first range of entirely British made watches for nearly 50 years. And so, the Series 1 was reborn. Made entirely in-house, the Series 1 now features a round case with a simple 3-hand time display. While inside, every component is now designed and made in the workshop, including the latest version of Roger Smith’s own single wheel Daniels Co-axial escapement, which has become the escapement of choice for each and every one of his production watches.

While the Series 1 was the first, the Series 2 is perhaps the most important. Brought to life in 2006, the Series 2 was the first watch to be entirely made in-house by Roger Smith. With its design, both mechanically and aesthetically, proving to be the catalyst in defining Roger Smith’s ethos on watchmaking and cementing his name as one of the industry greats. Visually, the Series 2 calls upon all the hallmarks that have come to represent a Roger Smith watch, with its round case, sculpted hands, and a uniquely engraved or engine turned dial, which here also features an up down indicator. 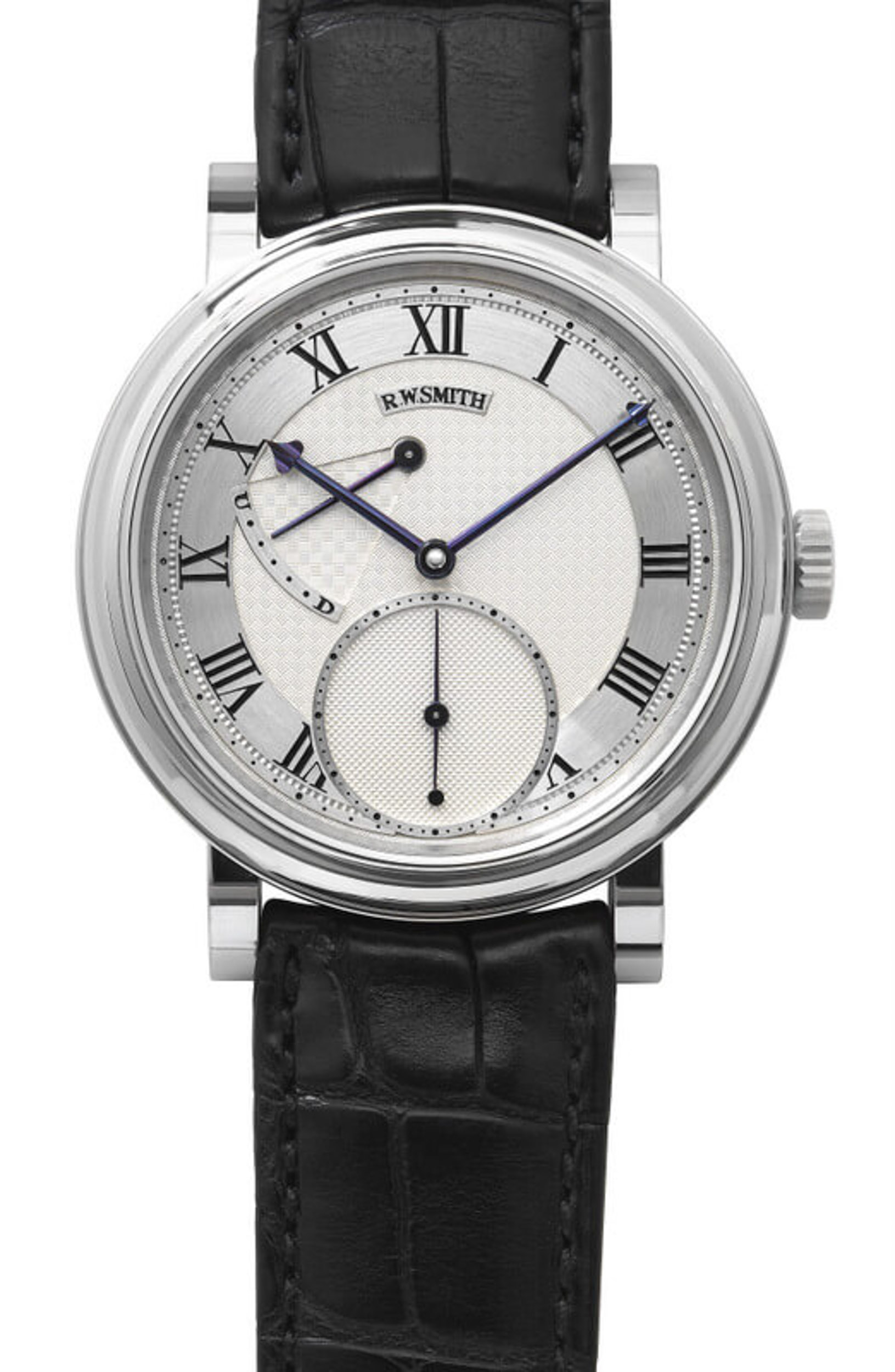 The third offering from the collection, takes the modern-day Roger W. Smith aesthetic and combines it with the very first watch ever produced in the studio. Reintroducing a retrograde date complication into the round design of the contemporary Series 1. Featured at the top of the dial, the retrograde display brings a beautiful balance as it reflects opposite the seconds sub dial at six o’clock. While inside beats a manually wound in-house movement with its balances, bridges, and plates all expertly decorated in the traditional English style with frosted finishes and floral designs, yet another set of hallmarks that defines a Roger W Smith watch. 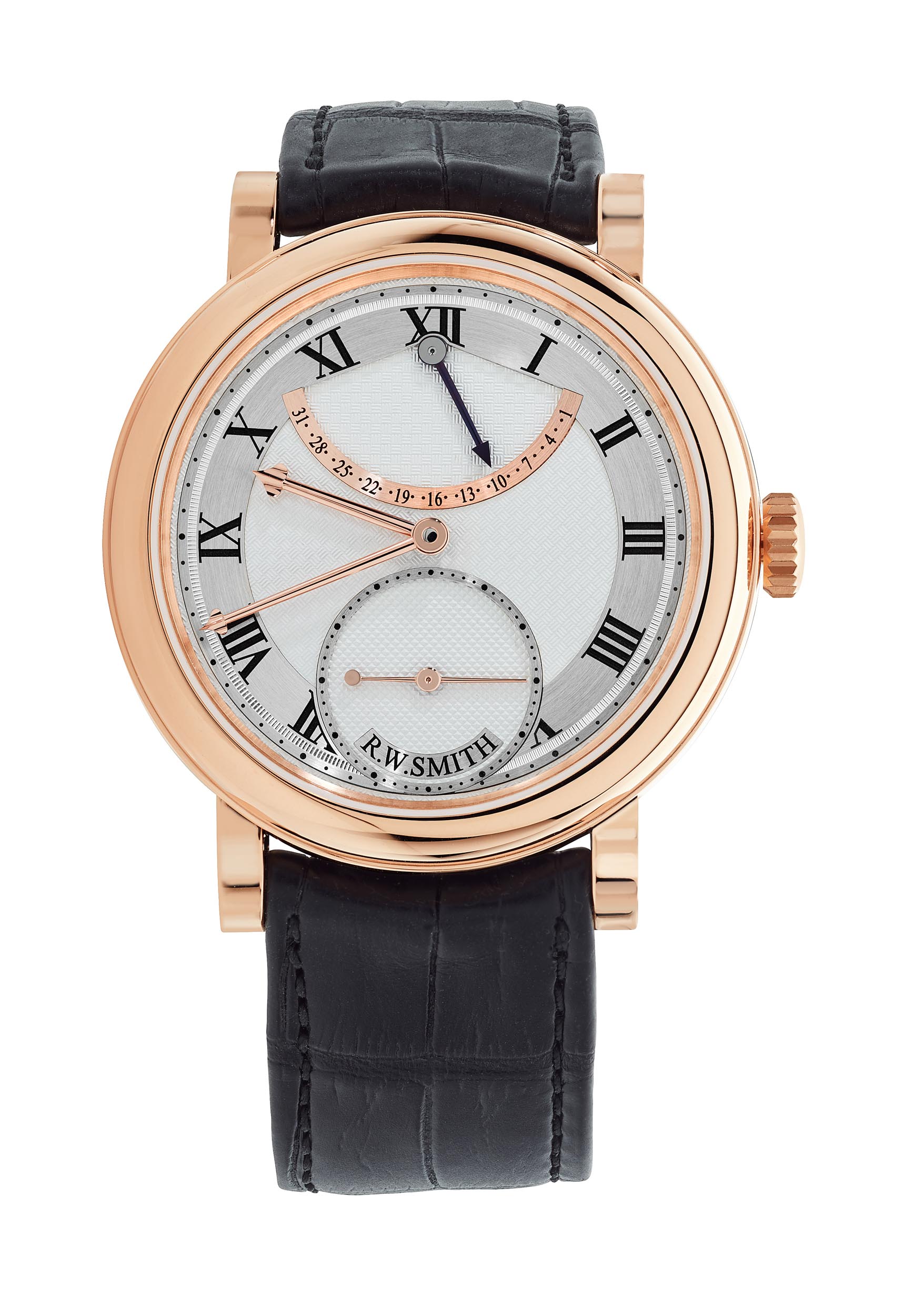 Throughout much of Roger Smith’s work it’s easy to see the influence and teachings of his mentor George Daniels. Perhaps no more so than with the Series 4. The most complicated of the production watches produced by Roger W. Smith, the Series 4 introduces a complex instantaneous triple-calendar and combines it with the romance of a moon phase display. Embedded into Roger Smith’s psych by George Daniels was the core principle that a watch must always remain true to its purpose. Its design must not impact on its ability to be able to tell the time at an instant. And that was the ultimate challenge for Smith when designing the Series 4. A challenge conquered by the use of a travelling date aperture at the edge of the dial, which allowed clarity and symmetry to rein supreme. 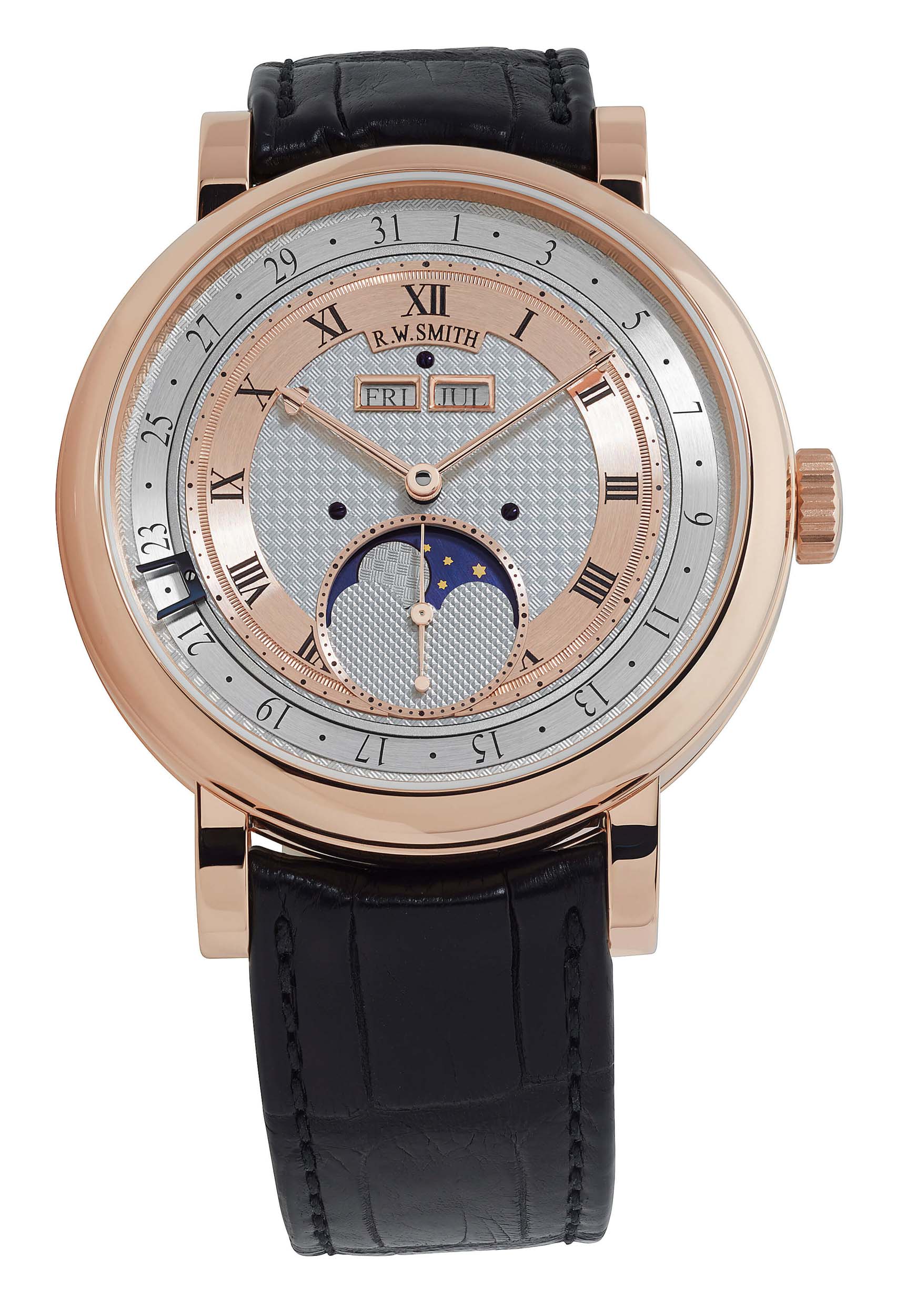 For the Series 5, Roger Smith wanted to reveal every bit of his movement. Showcasing a side of a watch that is rarely seen by anyone other than a watchmaker, the under-dial. Far more than simply removing the dial from the Series 2, the Series 5 goes even further in revealing the 3D architecture of the movement. Bevelled edges and black polished gold surfaces are framed by English frosted and gilded plates, and highlighted by expertly blued Roman numeral hour markers that surround. The heart of any mechanical watch lies undeniably within its movement. And the Series 5 wears its heart on its sleeve, giving its lucky wearer the chance to appreciate every handmade detail with each and every glance at the time. 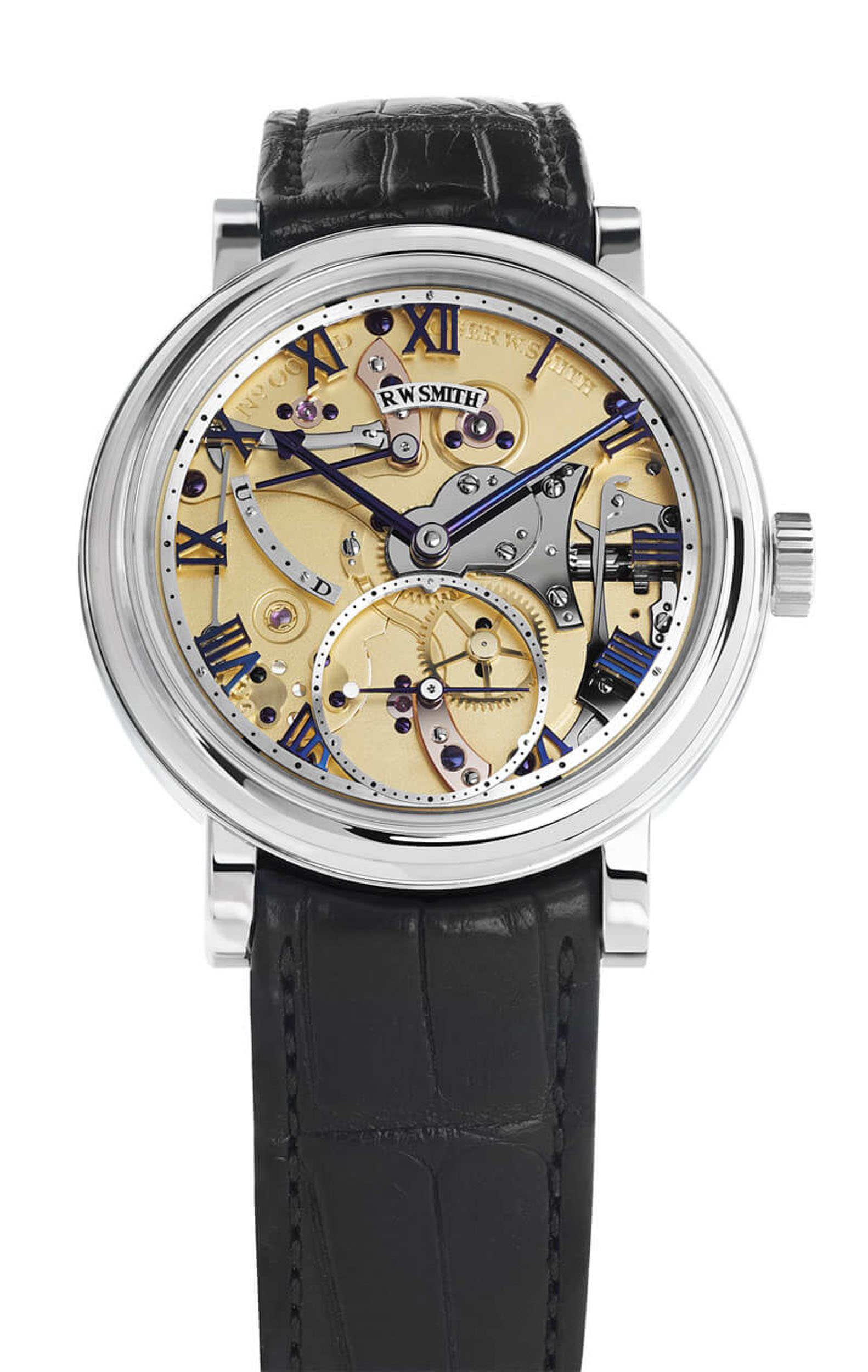