It’s that time of the year again when the watch industry is done with its two main trade shows and spring brings an air of calmness as the 2nd quarter begins.

After having a few weeks to take in and reflect on all that was presented, let’s look at what five of the most eminent independent watchmakers presented during Baselworld 2017:

MB&F
Never one to disappoint, MB&F delivered a few surprises at Basel.

First was a new edition of the LM2, limited to just 18 examples, featuring a slightly slimmer titanium case that measures 19mm at its highest point (including the massively domed sapphire crystal). 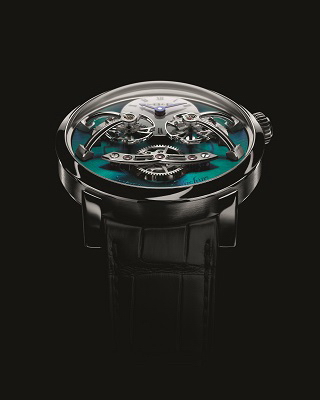 MB&F also presented another completely new timepiece during Baselworld, though better suited for the desk than the wrist!

The Destination Moon clock, produced once again in collaboration with clockmaker L’Epee, takes a page from the MB&F and Caran d’Ache pen collaboration with a whimsical portrayal of a rocket ready to liftoff towards the moon. It even features its own little astronaut figure, named Neil (naturally!). Destination Moon is available in black, palladium, blue or green, limited to 50 examples each. 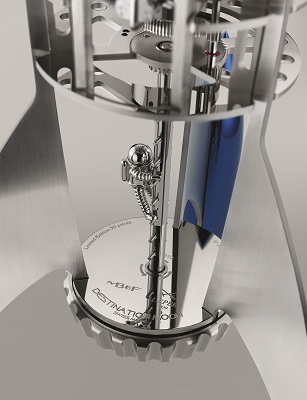 Urwerk
Still riding the wave of their monolithic anniversary piece UR-T8 unveiled in January, Urwerk still managed to come through with a few surprises for Baselworld.

The first isn’t a timepiece at all, but a collaborative project that looks and feels very much like an Urwerk: The Macallan X Urwerk Flask created with Scottish whisky distiller.

Among its features are two titanium tanks and a switching mechanism, winglets that allow the flask to stand securely, and cask indicator “rollers” on the bottom to display the age and wood type of the two whiskies inside. Now, we’ve seen the odd engraved piece from Urwerk pop up every now and then from Urwerk, but this one takes it to a whole new level. The UR-210 “Amadeus”, a unique piece in steel and titanium that features baroque motif engraving all over the case and integrated bracelet by Florian Güllert, a master gun engraver from Austria. 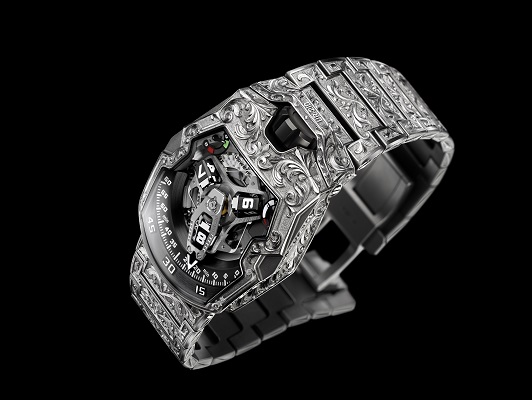 Kari Voutilainen
Almost an annual tradition by now, Kari Voutilainen presented a métiers d’art version of his Vingt-8, once again working with Japanese lacquer studio Unryuan. The Aki-No-Kure, which translates to “the scene in late autumn”, depicts Japanese pampas grass swaying with the wind on the dial side, and a dragonfly hovering above a water ripple on the interior of the hunter case back. Like in previous Unryuan pieces, the lacquer art also extends to the movement. Laurent Ferrier
For those of us who didn’t get to see Laurent Ferrier’s Montre Ecole during SIHH in January (myself included), Baselworld more than made up for it.

Laurent Ferrier presented a few new executions of the Montre Ecole – named after Mr Ferrier’s school project watch – including a new grey dial and, to the pleasure of many, the option to choose between the more “raw” decoration of the Montre Ecole with a gilded frosted finish, or the more lavish traditional Laurent Ferrier decoration of Geneva stripes. 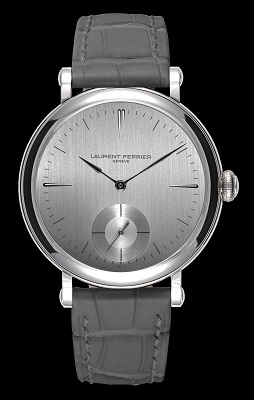 Romain Gauthier
In over 10 years since creating his eponymous brand, Romain Gauthier has only ever released two different movements. Baselworld 2017 saw the unveiling of his third, and naturally lovers of independent watchmaking were pretty ecstatic about it.

Meet the Insight Micro-Rotor, Romain Gauthier’s first automatic movement.  From a first look, the Insight Micro-Rotor manages to combine aesthetical elements from both the Logical One as well as the HMS in its design of the bridges. The watches main feature is its micro-rotor, made of 22k gold and placed between two bridges with central rubies to minimize friction and provide efficient winding.

Like all timepieces bearing the Romain Gauthier name, you can expect superlative finishing and decoration of each and every component.