Maxmillian Büsser is a numbers man.

What do I mean by that? Well, for one of the least predictable (predictably unpredictable) brands in the industry, the only constant so far seems to be the number 7. Seven was the number of years Max spent in Senior Management at Jaeger-LeCoultre, the number of years he headed up Rare Timepieces at Harry Winston and almost the same amount of time between founding his brand (MB&F, in 2005) and simultaneously unveiling the Legacy Machine Collection as well as opening the first M.A.D Gallery in Geneva (in 2011).

The M.A.D Gallery has since expanded into Taipei, Hong Kong and Dubai – becoming the primary port of call for both makers and enthusiasts of mechanical art. Whilst, the Legacy Machine has expanded into a fully-fledged collection of “Machines MB&F would have created 100 years ago”.

There’s a celestial quality to the FlyingT. Sitting under the high-domed sapphire crystal sits a central flying 60-second tourbillon, hours and minutes displayed on a 50° vertically titled dial at the 7 o’clock position. It’s a unique arrangement because at that angle only the wearer can view the time. It’s her time, it doesn’t belong to anyone else. It’s quite a romantic interpretation of something too often treated as a throwaway commodity or something to fight against.

MB&F’s watches make you stop. Regardless of whether you’ve got an LM101, a purple LM No.2 or the FlyingT strapped to your wrist, the effect of checking the time is hardly ever “well whaddya know it’s 6:30”. There’s something visually arresting about all of Max Büsser’s creations. Combining manufacturing techniques straight out of science-fiction with the very best of traditional artisanal watchmaking, resulting in technically and visually fascinating watches that reward closer inspection from every angle.

Watch enthusiasts have long prized the beauty and complexity of mechanical movements. Turning the watch over to see the gears spin and the escapement tick. Dial on the front, movement on the back. All as it should be. Except Max never really did things as it ‘should be’.

Take MB&F’s Legacy Machines as an example, the relationship between how the watch looks and how it works is closely intertwined. By integrating the movement on the dial, the wearer is able to simultaneously read the time and appreciate the mechanical beauty of the engine powering the watch. 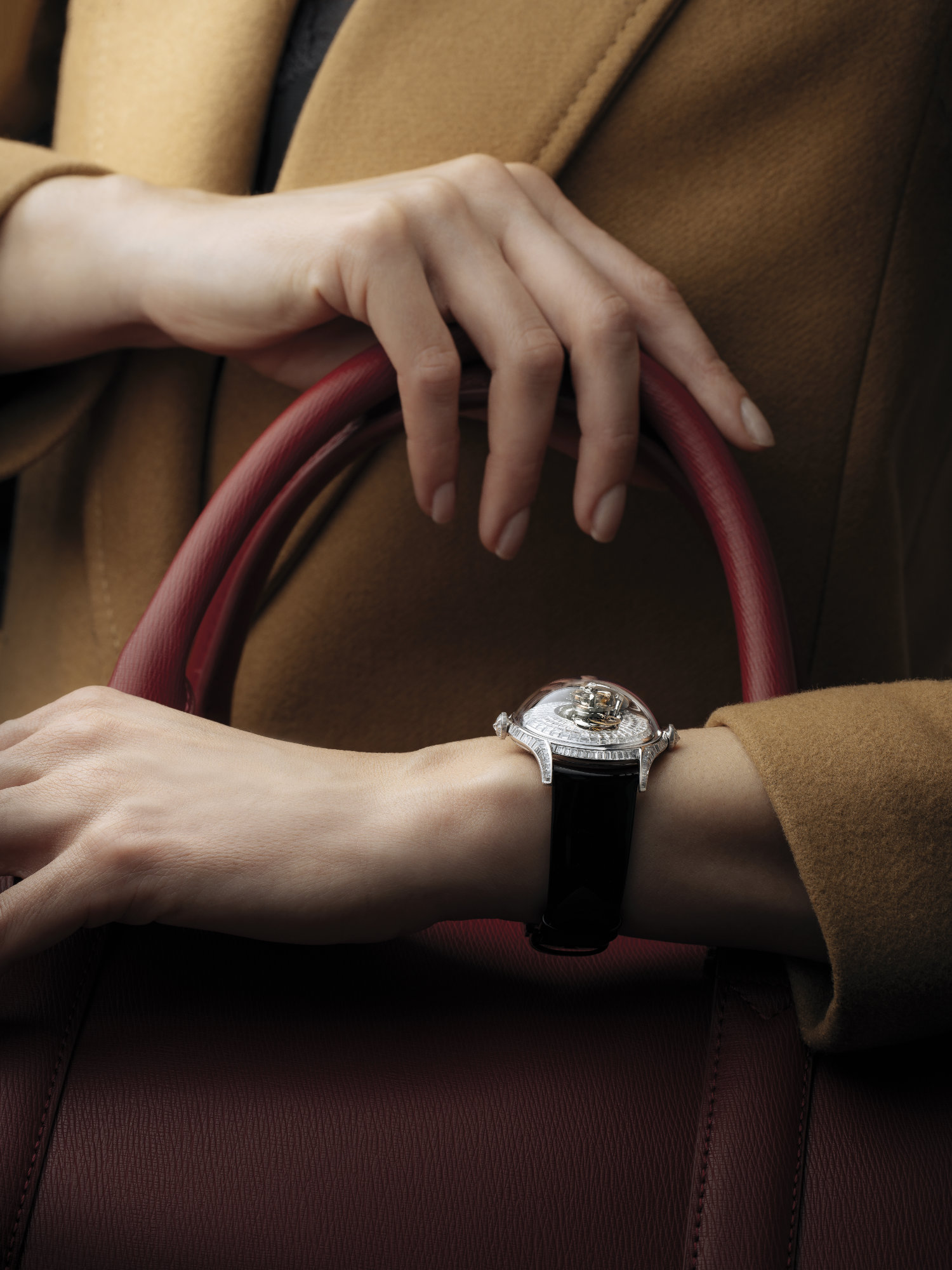 Both the black lacquer and baguette-cut diamond variants of the FlyingT feature white lacquer dials whilst the paved diamond-set edition has a black lacquer dial, all displaying the time with the help of a quirky set of serpentine hands radiating outwards.

Side on, the curvature of the geodesic-dome like sapphire crystal seamlessly flows into the case and slimmed down elongated lugs. Symmetrical double crowns – winding on left and time-setting on right – counteract the intentionally asymmetric ventricular opening in the dial plate (framing the heart of the LM FlyingT engine) and the cantilevered double-arch upper bridge (of the tourbillon cage). In lieu of the symmetrical battleaxe arrangement found on all other MB&F tourbillons.

Legacy Machine FlyingT’s three-dimension vertical architecture is wound via an automatic rotor in the shape of a radiant sun. Reminiscent of Renaissance-era depictions of the sun, the 18k 5N+ red gold rotor (it’s actually made of 18k 5N+ red gold, titanium and platinum) is a welcome sight on a watch considering the importance the sun has played throughout the history of horology.

At full charge, there’s enough power in the tank to power the FlyingT for 100 hours (4 days). That’s quite an achievement. Especially so, considering the rather diminutive sizing and ample use of negative space of the FlyingT, relative to its heftier horological brethren making similar claims. 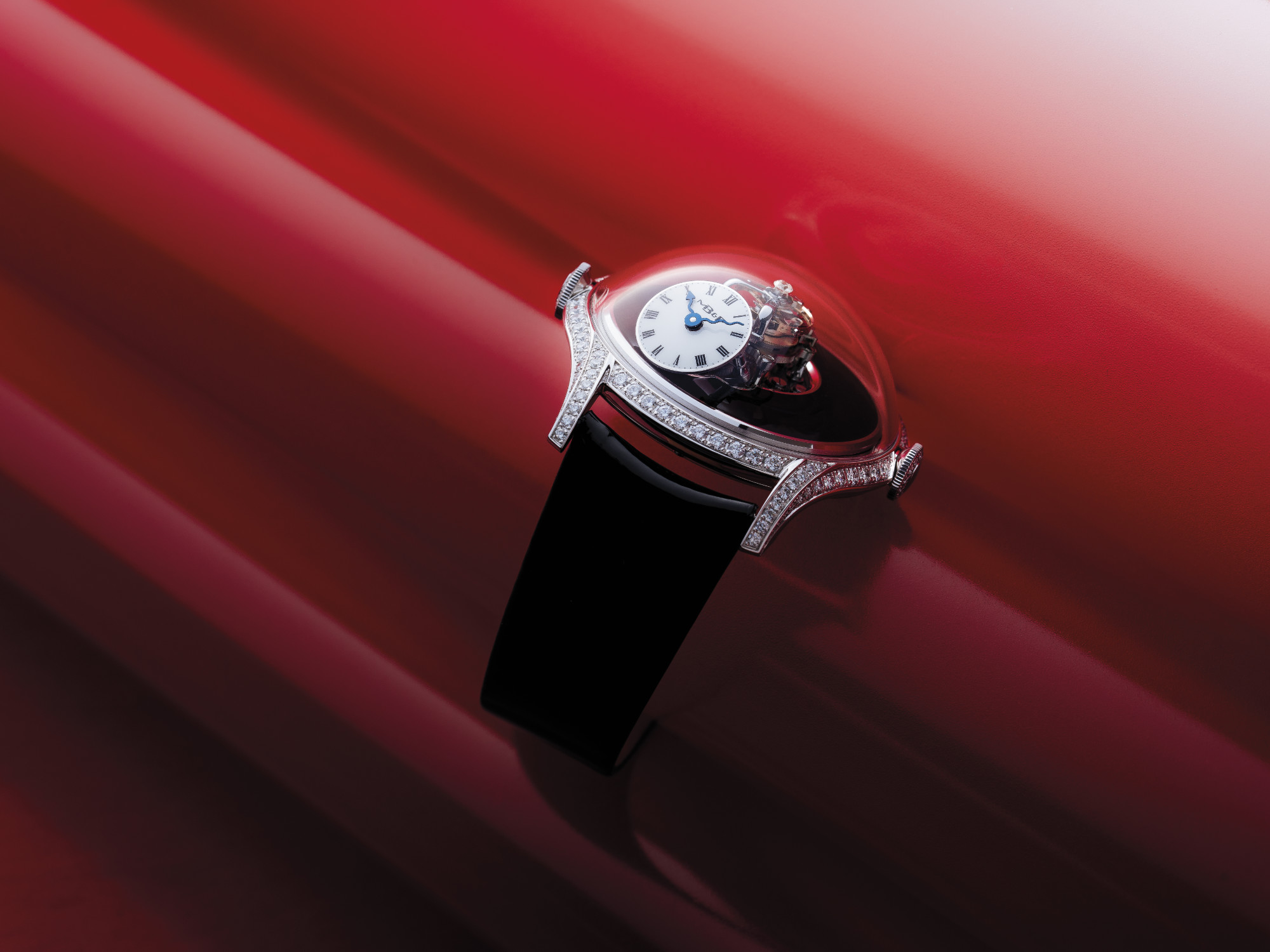 The Legacy Machine FlyingT ushes in a new and exciting phase for MB&F. Bringing together the best horological know-how and expertise the band has amassed over its 14-year journey. With a unique dial layout, flying tourbillon, diamonds for days and flawlessly seamless case; MB&F’s newest creation is creatively ambitious and a bold proclamation of the brand’s commitment towards making exceptional women’s watches. 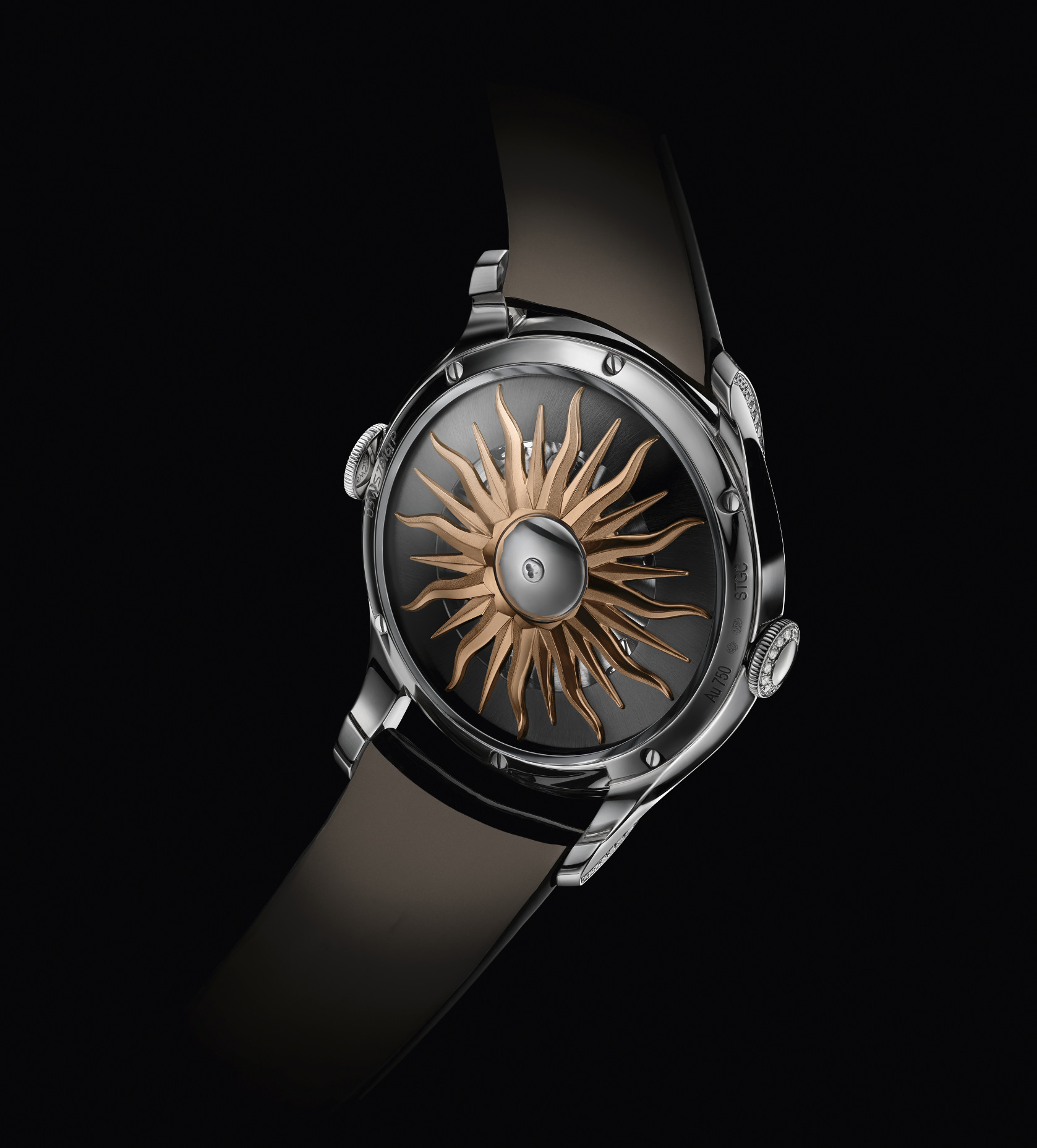