It has become obvious at this point: the vintage watch trend has ruled watch design in recent years. Much of the last two decades or so were about experimental projects for many major brands, even for some of the most prominent names in the industry, which have all painstakingly diversified beyond their traditional competence. Now the cycle has turned and the vintage watch craze has become the refreshing alternative to the avant-garde and contemporary phase that ruled before. Today we look at the ten most interesting and important reissues.

The Flagship Heritage 60th Anniversary celebrates the Longines’ extensive history by paying tribute to the remarkably elegant Flagship from 1957. This makes for a good start to our story as it demonstrates one major reason for the success of this old-new trend: the mid-20th century was a golden age of watch design in terms of balance, elegance and character. Many brands have produced some of their most watches during this time in what had actually been an incredibly competitive era for Swiss watchmakers competing in international markets before the Quartz Crisis. Measuring 38.5mm, the new Flagship has been updated so that it’s more in line with modern tastes – but even so, the stainless steel, 18k yellow or pink gold variants make for some exemplary heritage style. 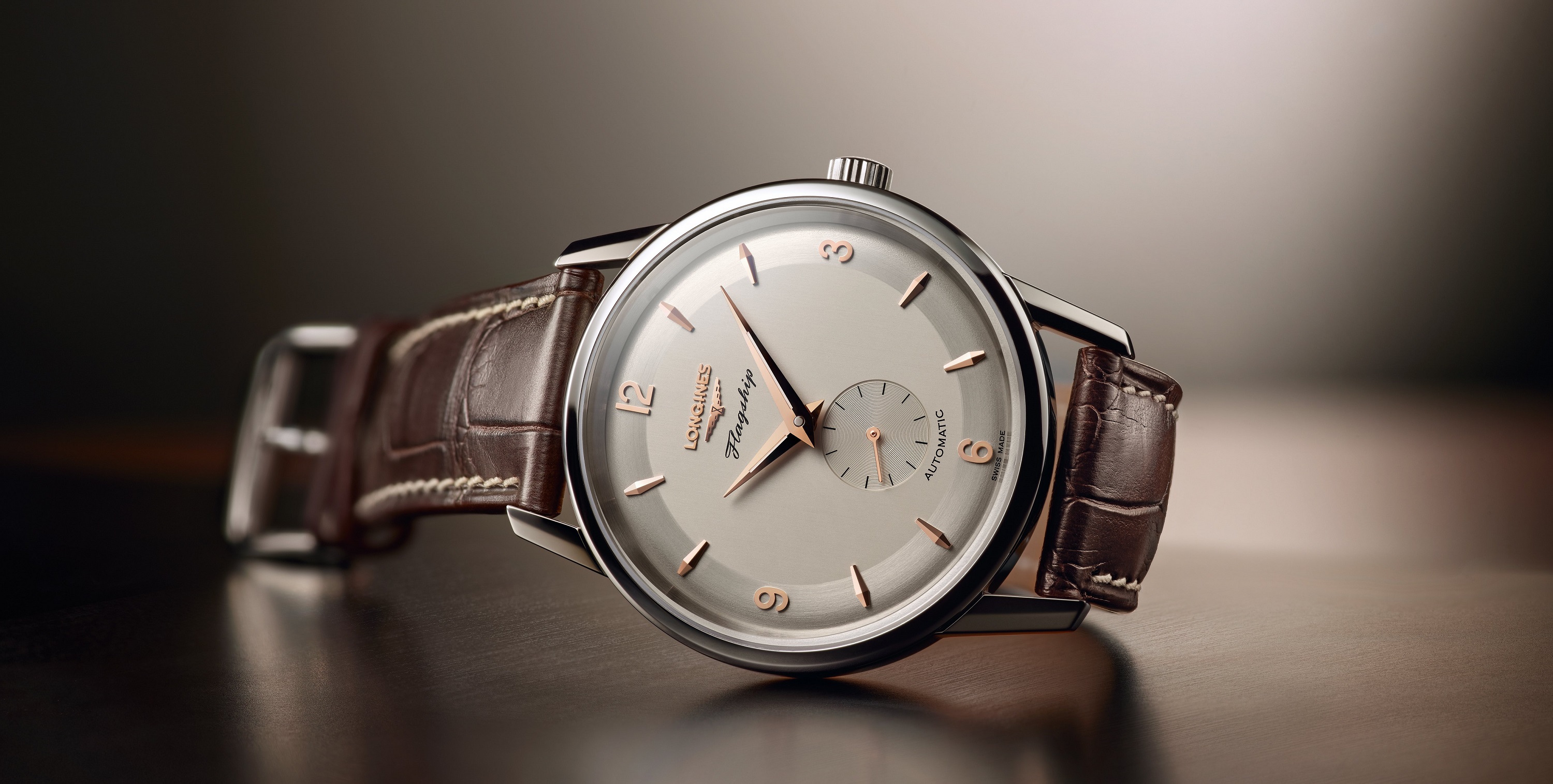 The Zenith El Primero 38mm is the definitive El Primero in the eyes of many, because it’s the same size and proportions as it was when the original made it debut in 1969. Zenith is of course smart enough to once again offer the El Primero in 38mm and do so not in just one remake of the original, but also numerous colorful variations including steel models with a number of dial and strap options, as well as pieces in 18kt rose gold and two-tone steel and gold. With a legendary chronograph movement and proportions to die for, the El Primero 38mm is one to be seen in person. 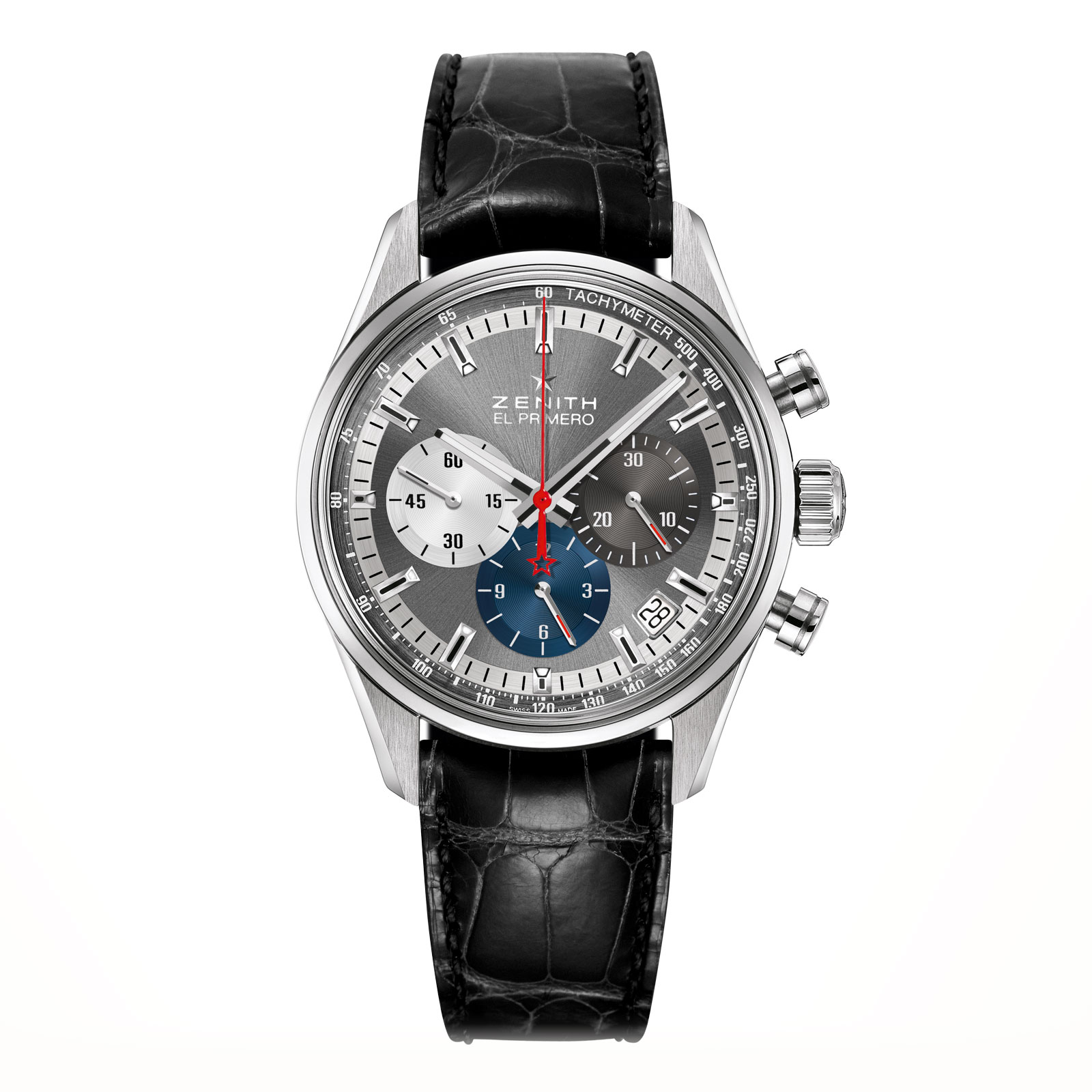 The Mare Nostrum Acciaio PAM716 is a rather unusual Panerai – that much is immediately apparent. It ditches the traditional case styles of the Luminor or Radiomir, and is instead based on a prototype officer’s chronograph that Panerai produced back in the 1940s. Smaller and more wearable than the oversized original, the 42mm case features a remarkably elegant curve that runs between its lugs, shining in a high polish on this modern version. A blue dial with beige indices makes for good contrast and legibility, while the OP XXXIII movement remains hidden behind a solid steel case-back.

Certainly among the most hotly discussed new releases this year is the Navitimer 8 that marks a new chapter in the Breitling’s history. Georges Kern, previously the CEO of IWC, has taken the helm of Breitling recently and the Navitimer 8 is the first watch launched under his leadership. As Mr Kern indicated in several interviews, the Navitimer is not a straight remake, rather a new watch that incorporates elements from various vintage Breitlings, like the notched bezel and beveled lugs. Though named Navitimer, the watch has ditched the complex multi-scale slide rule commonly associated with the Navitimer in favor of a cleaner and more restrained look that’s retro yet different from the typical Breitling. The Navitimer 8 is a full line of watches that ranges from 3-hand models to chronographs and world timers. 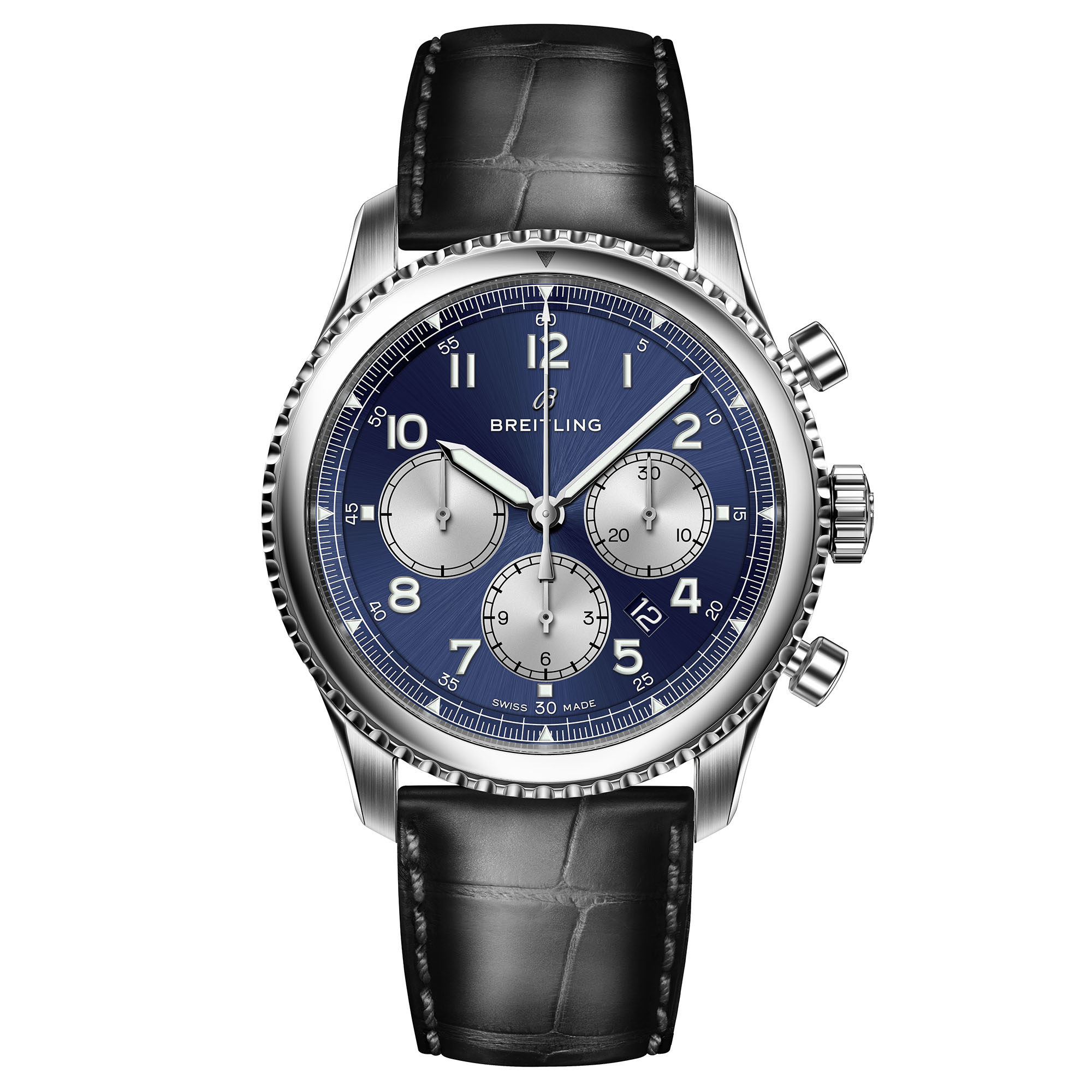 The Autavia is one of the great success stories in the vintage remake trend. TAG Heuer intelligently approached the delicate question of rebooting a much-loved collection by seeking the feedback of its global client base with an online poll. The masses voted and the winning design now lives on as the Autavia Heuer-02 with a panda dial and a 12-hour rotating bezel. The lovely, timeless look is paired with a 42mm case that’s beefier than the original, and the brand’s in-house Heuer-02 caliber, making this a winning combination of retro and modern watchmaking. 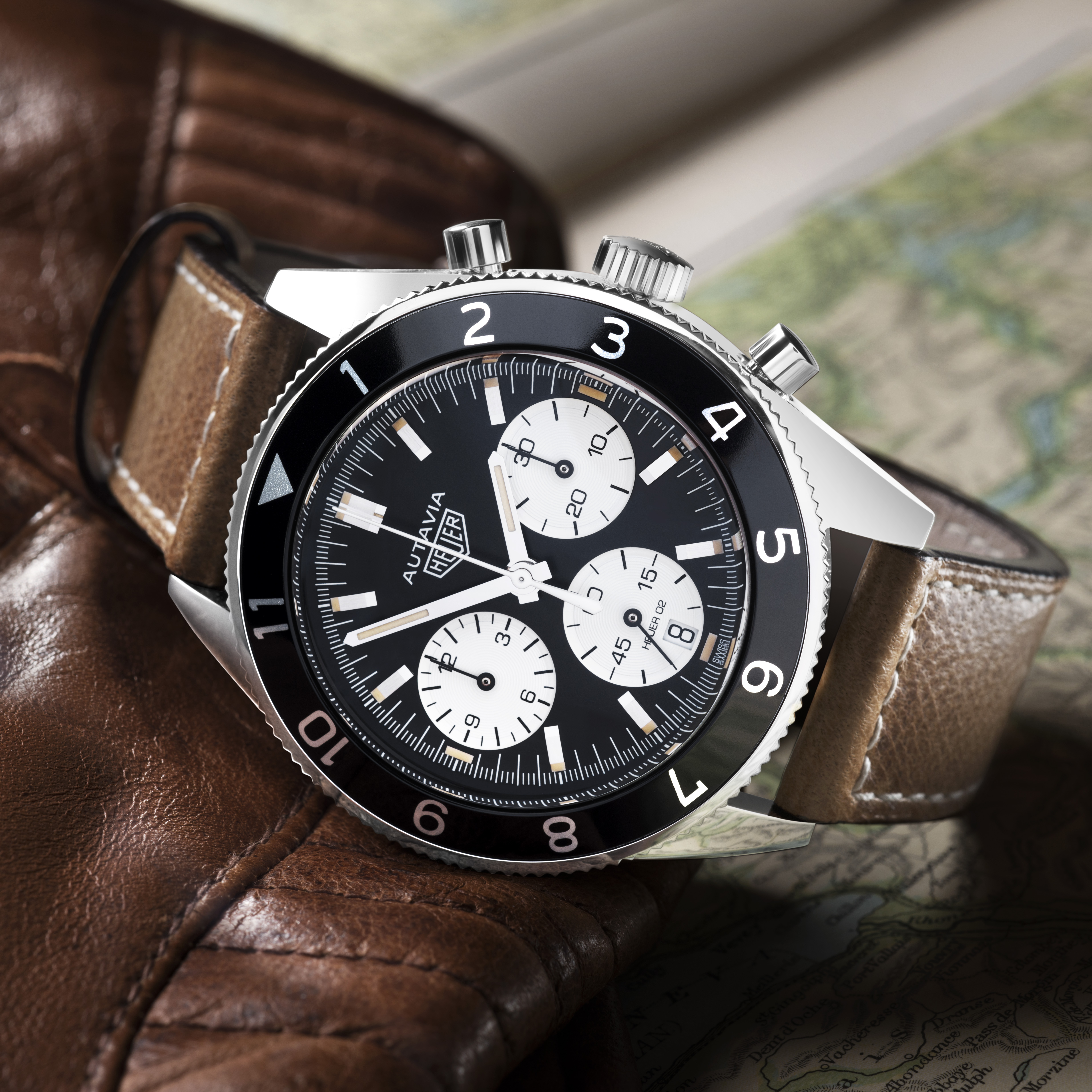 Though Ulysse Nardin is not known for making remakes, it did a good job with a quartet of reissues last year. One is the Diver Le Locle that is inspired by a 1964 diving watch – but the vintage style is paired with modern technology. At 42.2 mm, the steel case has water resistance to an ample 100m – not exactly pro-diving specs, but more than enough for scuba diving and a leisurely splash in the pool. Inside of it you’ll find the in-house UN-320 automatic movement with a silicon escapement and a 48-hour power reserve. 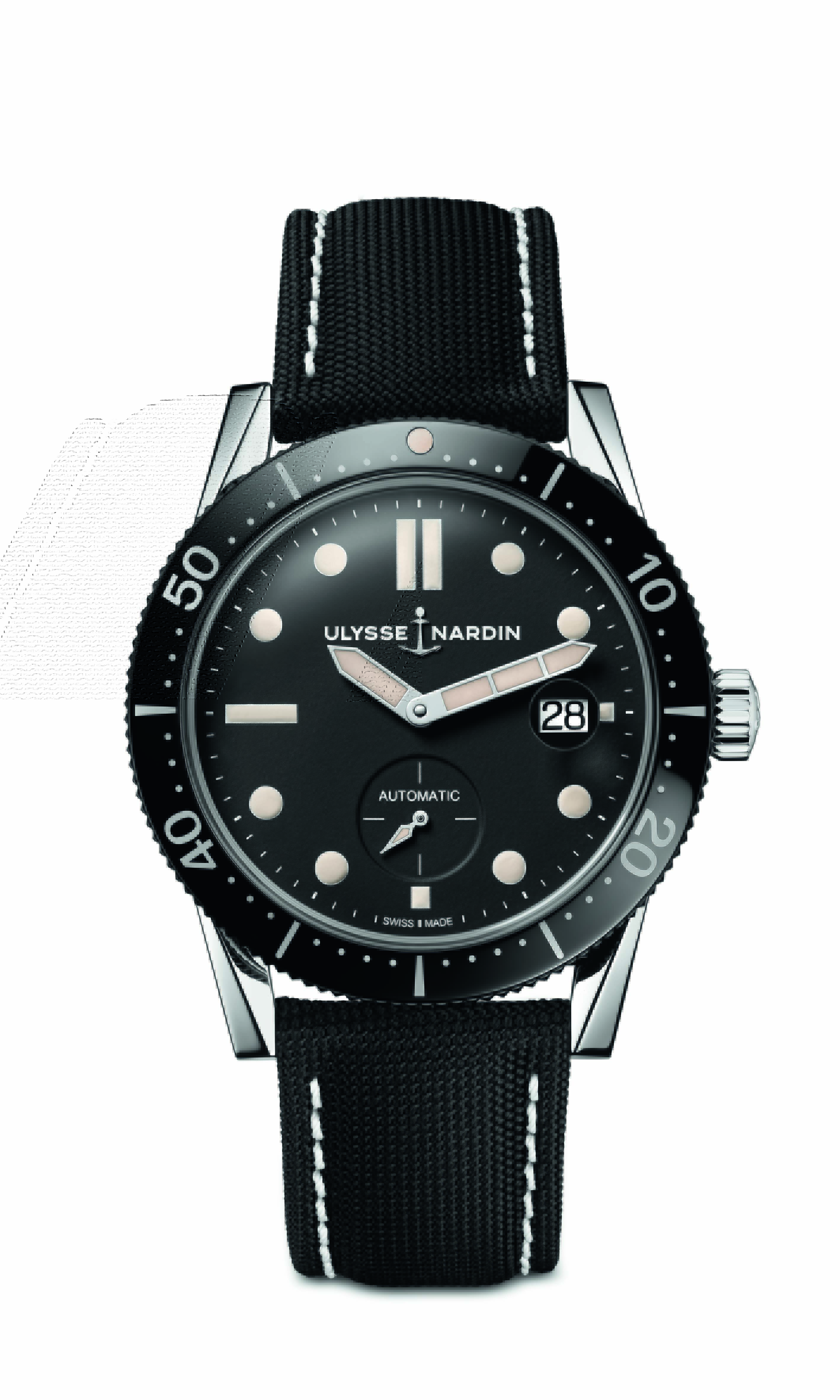 The HyperChrome Captain Cook 37mm is Rado’s way of bringing back to life its 1962 watch of the same name. Well proportioned and legible, this is a stellar design from Rado’s extensive, albeit often overlooked history of watches that aren’t ceramic. The remake stays true to the original with a 37mm diameter – which actually makes for stellar wearing comfort. Rado, best known for its expertise in ceramic cases, has of course used this scratch resistant material for the bezel insert – an upgrade from the aluminum original. Inside the steel case is the ETA C07.611 caliber that provides a weekend’s worth of 80 hours in power reserve thanks to a redesigned mainspring barrel and a low friction escapement. A strong value proposition, the Rado HyperChrome Captain Cook 37mm is one of the best kept secrets among the superstars of the reissue watch trend. 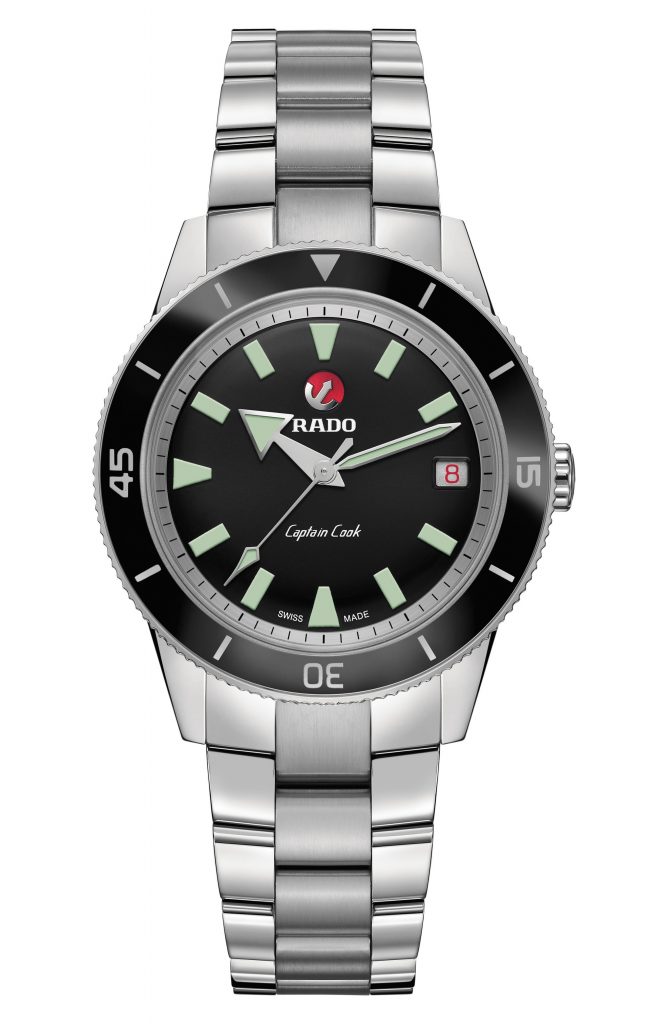 The Tribute To Mark XI is a somewhat confusingly named, but a rather straightforward watch. While the base is the modern day Mark XVIII, it’s inspired by the Mark XI, a watch IWC made for the British air force in the 1950s, explaining its handsome military-issue look, with a highly legible dial, earth-toned lume, large Arabic numerals. At just 40mm wide and matched with a green textile strap fitted with IWC-quality steel hardware, this reference IW327007 is a true military-inspired watch that recalls the era when IWC was at its peak of producing reliable timepieces for use in some of the most demanding situations. 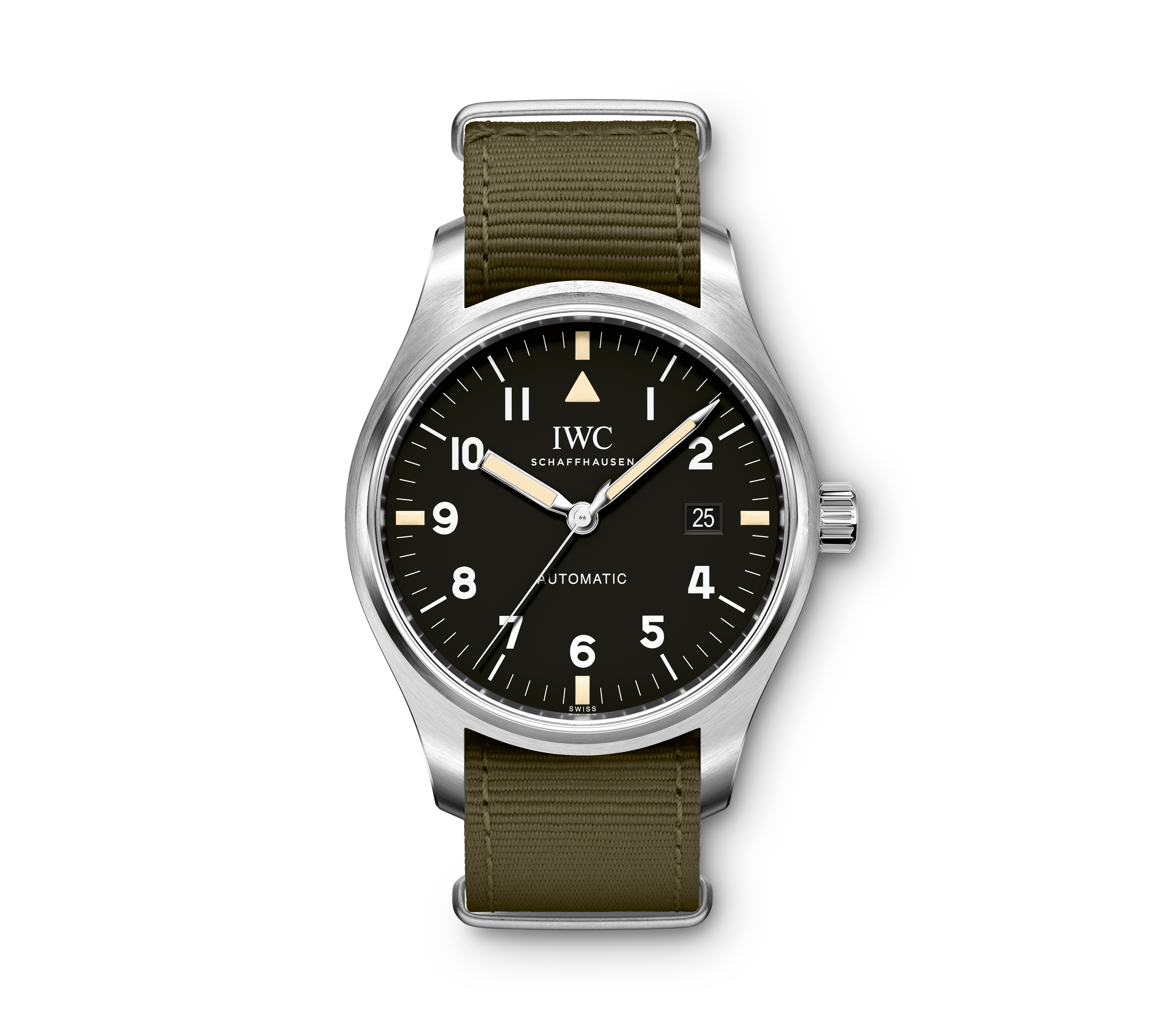 Based on the 1968 diver’s alarm watch, the Polaris Memovox has proven to be one of the heavy-hitters of SIHH 2018, being the best of the new Polaris line of retro sports watches. Issued in a limited run of just 1,000 pieces, the Polaris Memovox is back in a masculine, yet purposeful package: water resistant to 200m, crafted from stainless steel with a diameter of 42mm, the Polaris Memovox is a modern take on a highly functional, yet streamlined watch. The Memovox alarm function is handy as an analogue reminder even in today’s high-tech world, as is its ideal legibility and the comfort of its rubber strap. A blast from the past, the Polaris Memovox is as striking today, as it was fifty years ago.

Last, we have the 1957 Trilogy, a set of three watches that faithfully reproduce the 1957 originals, which are amongst the most important sports watch Omega ever made. Comprising the Seamaster 300, Railmaster and Speedmaster ’57, the trilogy is a collectors’ dream when purchased as a three-piece set. But if you’ve fallen for just one of the three, worry not, as all three pieces – sized in between 38 and 39mm like the originals – are available for purchase individually. Being such spot-on replicas – Omega even employed x-ray scanning to duplicate the vintage originals – each of these watches is like an Omega time capsule, almost allowing you to travel back in time. 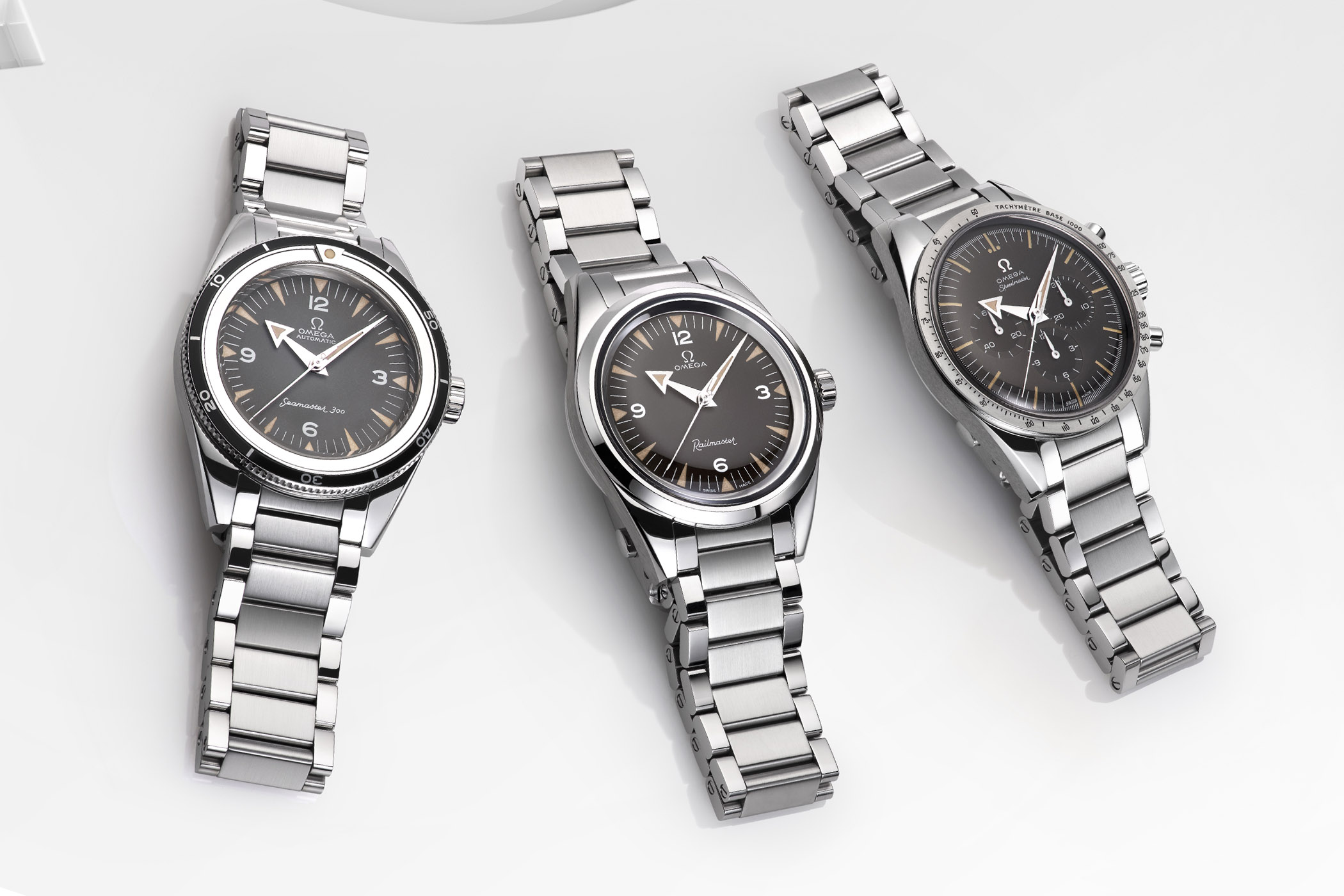