When MB&F started in 2005, to have one completed calibre was a challenge in and of itself. The brand has come a long way, introducing its 20th calibre in just 17 years of operation. After reinventing the perpetual calendar, MB&F collaborates with Stephen McDonnell again. This newest addition to the MB&F lineup comes in the form of a chronograph like no other.

The new Legacy Machine Sequential Evo is the first chronograph by MB&F. And in typical MB&F style, the watch is unlike any other existing chronographs ever made. A look at the dial tells you instantly that it is a double chronograph, with pushers on the sides of the case to activate the chronographs. Intuitively, the top and bottom pushers on either side are the start/stop and reset pushers for the corresponding chronograph on each side. This is just the start of the ingenuity of the LM Sequential Evo – the two chronographs run independently of each other, making it possible to time multiple events with separate start and end points, even when the events overlap in timing. MB&F calls this “independent mode”.

With the switch function that comes with the Twinverter, it means the LM Sequential EVO can do things no other mechanical chronograph wristwatch has been able to accomplish so far. Aside from independent mode described earlier, the Twinverter makes it possible to have a multitude of timing modes. In simultaneous mode, the LM Sequential Evo can measure the individual duration of two events that start simultaneously, but have different end points. Cumulative mode measures the cumulative durations of two discontinuous events, such as timing of chess matches where players have a set amount of time each. Sequential mode, or lap mode, allows measurement of individual sub-durations of a single continuous multi-phase event.

Five years of research and development went into this 585-component, 59-jewel engine. It all started when founder Maximilian Büsser spoke to Stephen McDonnell about a follow up to the Legacy Machine Perpetual (2015), eliciting a simple, four word response: “I have an idea.”

While the double chronograph complication has been in existence for nearly two centuries, and as a wristwatch complication for nearly a hundred years, the LM Sequential EVO is groundbreaking in housing essentially two independent chronographs within the same movement, but linked to the same oscillator. This idea not only links the watch to the rest of the Legacy Machine family with the central flying balance wheel, it also means timing errors due to tiny chronometric discrepancies between the different timers is eliminated.

The chronograph vertical clutch is also reconfigured to sit within the main gear train. This eliminates the flutter of the chronograph seconds hand without the need for an amplitude-draining friction spring. And of course, the “Twinverter” concept is the crowning touch of this revolutionary watch. The ability to instantly toggle between operating modes for both chronographs open this mechanical complication to use in an unprecedented variety of possibilities. 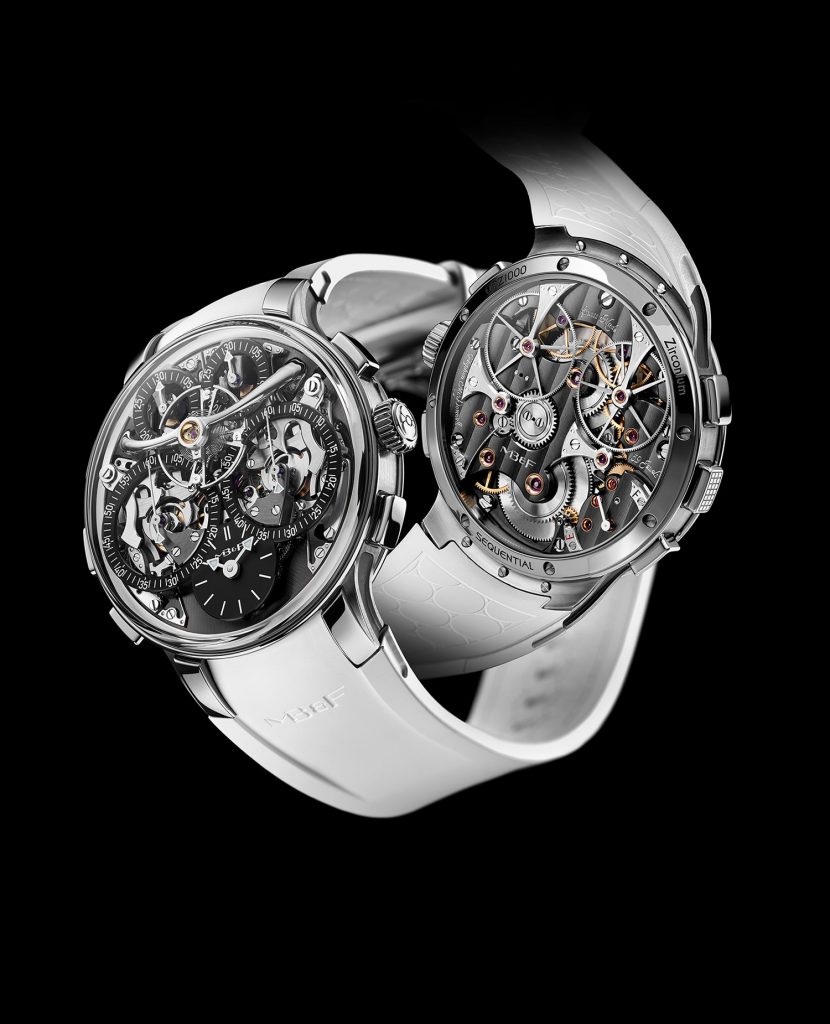 In 2020, MB&F introduced the LM Perpetual EVO that retained the visual codes of the Legacy Machines, with a more robust, versatile, and wearable design. The new LM Sequential EVO continues the EVO collection.

Like the first LM Perpetual EVO, the LM Sequential EVO also uses zirconium in the case. This silvery grey metal has a deep lustre, is lighter than stainless steel, and more durable than titanium. Hypoallergenic and anti-microbial, zirconium fits ideally in an active lifestyle.

The no-bezel design means there is more focus on the movement. The beauty of Stephen McDonnell’s symmetrical and balanced is encased in a special domed crystal that is a hallmark of the Legacy Machine look. In this latest creation, the perfectly smooth arch of the crystal actually contain two subtle and difficult to achieve angles incorporated in the camber of the crystal. This minimizes the overall height of the LM Sequential EVO when worn.

The FlexRing, an annular dampener that fits between the case and movement, provides shock protection along both vertical and lateral axes. Along with the integrated rubber strap, the EVO collection can keep up with all aspects of an active life.

The manual-wound MB&F Sequential EVO in 44mm has a 72-hour power reserve and water resistance of 80m. It is available in two colours – atomic orange and coal black.