Winter is coming! This year, the arrival of two limited edition Legacy Machine FlyingT models inspired by swirling snow and icy stalagmites mark the occasion. The new “Ice” and “Blizzard” editions – limited to just eight pieces each – are the result of a collaboration between MB&F and emerging French jewellery designer Emmanuel Tarpin, best known for his unique pieces that combine his love for nature, sculpture, innovative materials and gemstones. Emmanuel Tarpin met Max Büsser while studying at Geneva’s Haute école d’art et de design (HEAD), where Max made a presentation to the students about MB&F. A few years later, Emmanuel Tarpin’s name popped up as an up-and-coming jewellery designer to watch, prompting Max to look him up online, and realising the two were already connected. An exchange of messages followed, and the rest is history.

For Emmanuel Tarpin, personal contacts are at the heart of everything he does, and he chooses and declines projects based on the quality of these connections. This independent young artist, who prefers to work alone, meeting his clients and suppliers in person and running literally every aspect of his company solo.

“I do very few collaborations; I much prefer to focus on my own creations, but we had a chat and then met in person and we got on really well. I found the project to be extremely interesting and working with Max was just spontaneous and easy, even if this was my first time working on a watch!” Emmanuel Tarpin, jewellery designer, explains. 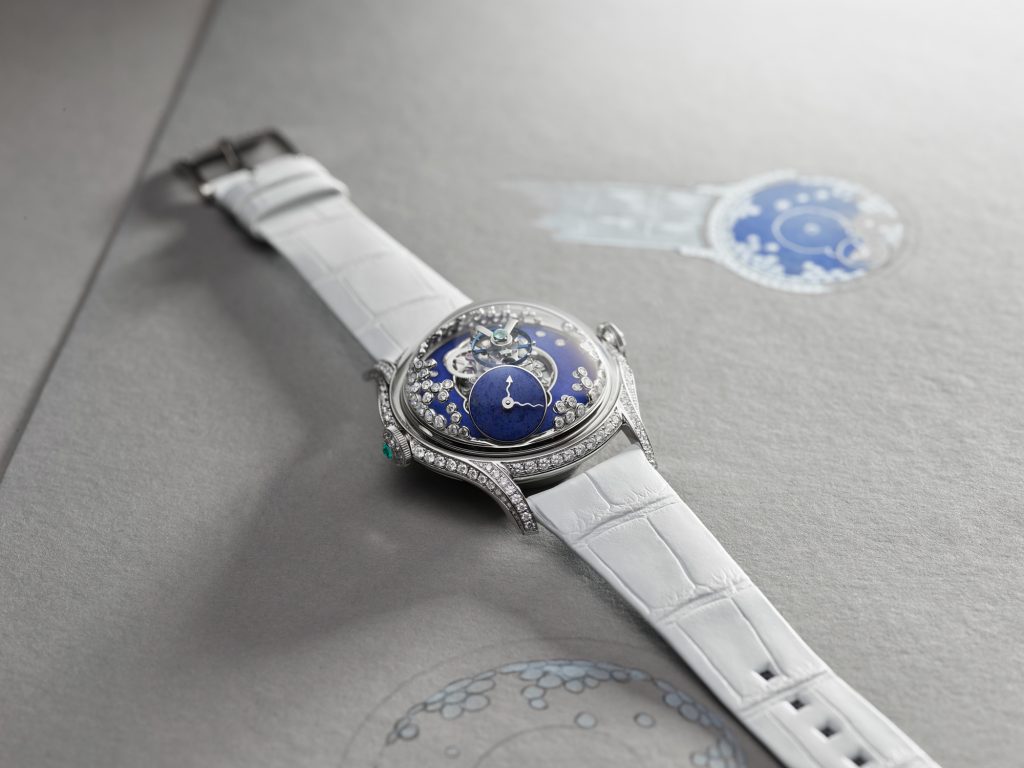 The Legacy Machine FlyingT immediately appealed to Tarpin. Deviating from the usual flat shapes of watches, the FlyingT’s volume with its domed space around the vertically built mechanism offered a unique opportunity for Tarpin’s creativity.

“We are not jewellers, we are watchmakers,” shares MB&F founder Maximilian Büsser. “We would put diamonds on our timepieces, but it was really the bare minimum. So, I started to see jewellers, great jewellers, to ask them if they would like to put their artistry and jewellery into our FlyingT – much like giving them a blank canvas to paint.”

Inspired by winter, Tarpin’s favourite season, the two new limited editions “Ice” and “Blizzard” are personal interpretations based on his experiences and memories of the winter wonderland from his hometown of Annecy to the watchmaking centre of Geneva.

“Ice” features asymmetrical diamond-set stalagmites that encroach on the sapphire crystal dome and the movement. Each icy stalagmite is different, replicating the randomness of nature. Tarpin took his inspiration from a trip to Lake Baïkal in Southern Siberia, where in winter the lake freezes from the edge inwards until it is totally frozen. The claws of the diamond stalagmites have not quite claimed the movement and the matt lapis lazuli dial, leaving the beauty of the mechanism and the time visible to the eye.

For the second model, “Blizzard”, Tarpin let his imagination run free into the Alps where he has been skiing since he was two years old. He has interpreted memories of being caught in blizzards of snow into the LM FlyingT with brilliant-cut diamonds set under the sapphire crystal dome and closed-set diamonds set into the matt lapis lazuli dial, depicting snowflakes on the ground. The result is like a snow globe in motion.

The LM FlyingT was the perfect canvas for this collaboration with its radical architecture and construction that contrasts beautifully with its jewelled winter cloak. From the beginning, this creation was intended as a tribute to femininity, with the T in FlyingT standing for the initial of Max Büsser’s wife, Tiffany, as well as for flying Tourbillon. In an ultimate refined touch embodying this intimate approach, the movement is designed in such a way that only its owner can see the time. The case-back reveals the sun-shaped oscillating weight: its sandblasted and polished rays rotating on a ruthenium disc positioned above a platinum counterweight. 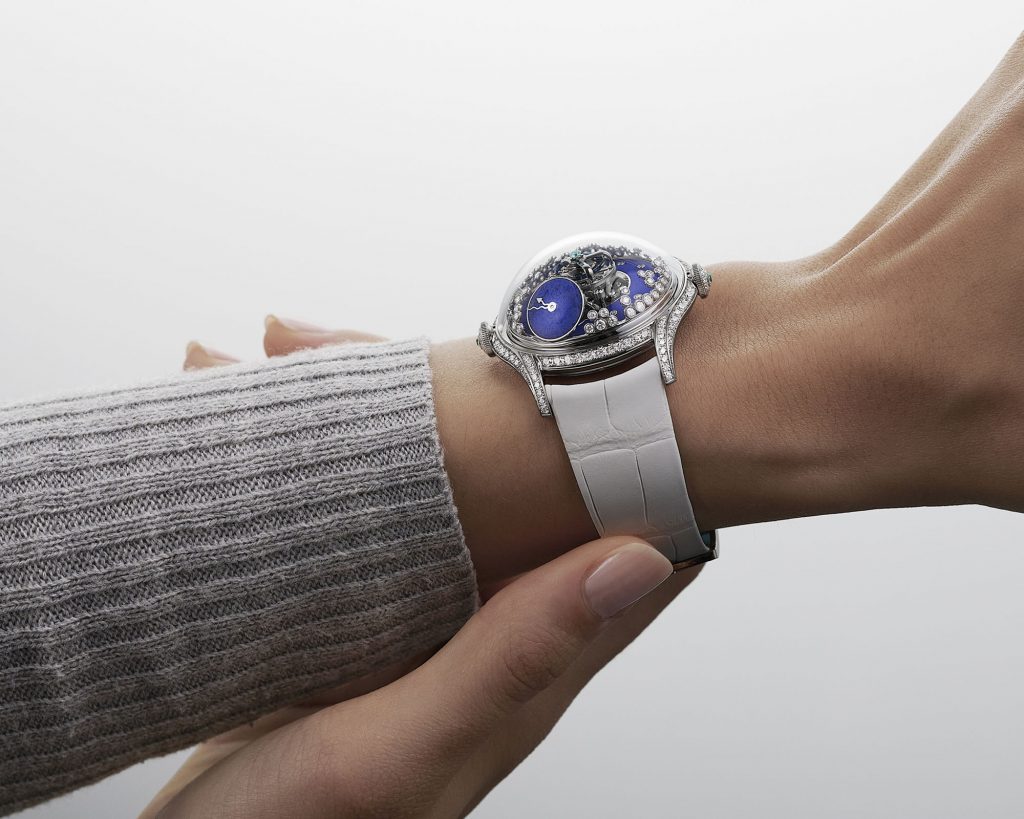 For this collaboration, Emmanuel Tarpin requested that all gold-coloured elements be removed, as that would have clashed with the white gold case and icy theme. This seemingly innocent request was not quite as simple as it may seem, but all the yellow or red gold elements were changed, while the balance wheel was blued. Another request was to switch out the diamonds set into the centre of the tourbillon and two crowns for rare turquoise Paraiba stones, to further reinforce the glacial theme.

Between the regulating organ and the rotor, the barrel ensures a generous 100-hour power reserve made possible by the reduction in the number of gears. A sapphire crystal dome tops this three-dimensional assembly, beneath which one can admire the organic life of the movement.

The beauty of this partnership is that it goes far beyond the realm of the complicated feminine jewellery watch. It highlights two visions of the world, two interpretations of creativity that are radically different in form, yet which merge in substance within an integrated and harmonious co-creation vividly demonstrating the power of collaboration. About the FlyingT Engine

In a departure from most modern watch movements, which take a radial and co-planar approach to movement construction, the LM FlyingT engine utilises a vertical and co-axial approach, along a central axis orchestrating the overall architecture of the entirely visible mechanism. In this respect, the watch deliberately goes against tradition, since everything that is usually hidden is highlighted here in a three-dimensional construction.

The cinematic flying tourbillon, which boldly projects beyond the dial-plate of LM FlyingT, is a visually stunning example of the rotating escapement and stands in stark contrast to other flying tourbillons, which usually do not venture past the confines of their surrounding watch dials.

In order to display the time as precisely as possible on the 50° inclined dial, conical gears are employed to optimally transmit torque from one plane to another. The 280-component engine of Legacy Machine FlyingT has a power reserve of four days (100 hours), which is among the highest within MB&F.