Daniel Arsham is an American contemporary artist based in New York City. His works revolve strongly around the concept of a hypothetical future time, attempting to materialise his ideas and concepts through art/cultural mediums such as architecture, archaeological sculptures, drawings and films.

As a student of art history, Arsham studied the works of Andy Warhol – the legendary pioneer of Pop art. The influence of Warhol can be largely observed in some of Arsham’s works. Like Warhol, Arsham is a huge proponent of taking objects from our everyday experiences and turning them into pieces of art. However, Arsham adds his own characteristic twist by incorporating his concept of a hypothetical future.

For example, his ‘Fictional Archeology’ series involves objects that we deal with and see every day such as cameras and sneakers, which are then subsequently made to give the impression of being crystallized and calcified as if they have been unearthed by an archeologist in the future. By making contemporary everyday objects appear fossilized, Arsham makes us envision our modern time as the past of a future, and our daily objects as representative of our present era.

A notable example of this is Arsham’s Eroded Brillo Boxes – a homage to and his signature take on Warhol’s iconic Brillo Boxes. Warhol’s Brillo Boxes are near-perfect replications of wooden sculptures of the packaging of Brillo soap pads, a popular consumer product of the 1950s. The sculpture, which was first displayed in 1964 in Manhattan’s Stable Gallery, was revolutionary at the time as it raised the question as to what constitutes art. In this case, it made people ponder if the mundane packagings of everyday consumer goods can even be considered and valued as art, and as well as how far should art imitate life.

Arsham injects and instills his philosophies into this classic, by making sculptures of the Brillo Boxes that appear lapidified after being buried for some time. Unlike Warhol’s version which is bold, bright and colourful, Arsham’s one appears greyed out and petrified, with intentional imperfections such as cracks and crevices throughout the artwork. Eroded Brillo Boxes was sold on 15 November 2019 at the Sotheby’s Contemporary Art Day Auction for 150,000 USD, which is way above its expected fetching price of 50,000 – 70,000 USD. This pays testament to both Warhol’s endearing legacy, and as well as Arsham’s signature take. Befittingly, the proceeds are being used to benefit the Andy Warhol Museum in Pittsburgh, such as its educational and exhibition programmes.

In order to increase the outreach and accessibility of his work involving everyday objects, Arsham has very recently occupied The Corner Shop at Selfridges (until 5 January 2020) for a unique retail experience. Aptly titled ‘The House by Daniel Arsham’, the shop has been transformed into his vision of a house of tomorrow in 3019, with archeological artefacts of contemporary everyday objects. Each room of the house is intended to resemble different sections of a normal homely environment, and they contribute to an experience akin to walking through an exhibition.

Placed throughout the retail exhibition are some of his works that can be purchased directly, and they range from being affordable to some that are more pricey, although Arsham believes that the pricing of his works are not directly proportional to the experience that they distill. One of the most popular items that are being snatched off the shelves are his redesigned Heinz Cream of Tomato Soup cans (selling for £1.50 GBP), another symbol of mass consumption. This is a tribute to Warhol’s ‘Campbell’s Soup Cans’ – another one of the pioneer’s iconic work which contributed to the rise of the Pop art movement in the 60s. Perhaps the most striking piece in ‘The House’ that made people stop in their tracks is a Porsche 922, complete with Arsham’s signature degraded and decayed aesthetic. The Porsche was made in collaboration with Porsche and is completely operational. Other notable works include the furniture, a basketball hoop and a Smeg fridge, all stylised with the charming aged appearance.

Part of Arsham’s rationale in transposing his art into a retail environment is to make his art more approachable by allowing people to feel more comfortable with interacting and engaging with them. If it is placed within a standard art museum or gallery, most people who are not frequent goers to those kinds of locations may not know what is the standard procedure and how to act in certain ways. In a retail environment, however, people are immediately liberated as shopping is something that we do almost daily. This is how Arsham believes art should be – an everyday experience for the masses.

As a testament to the versatility and applicability of Arsham’s work and philosophy, he has collaborated with Kim Jones – the head of Dior’s men collections – to infuse his concepts of time on Dior’s 2020 spring and summer collection and show, as well as the set. Arsham’s ability to “freeze” the present and to capture moments in time allows one to imagine how Dior would like many many years from now, such as by reinterpreting many of Dior’s iconic works, even items from Dior’s office itself, into future relics. Being able to translate, incorporate and combine his work with fashion speaks volumes about the impact and the message of his art.

The success in Arsham’s works lies in their ability to question people’s notions and concepts of time. They convey a time that is circular – where the past, present and future are constantly intermingling and coexisting, as well as the fleetingness of different times. Just as how we uncover relics of the past that inform us about history, so too will seemingly unimportant objects of the present be uncovered in the future, informing future generations about our contemporary period. Perhaps, we should start thinking about how we want ourselves to be remembered.

For The Hour Glass Then Now Beyond Exhibition, Daniel Arsham has created the bronze Hourglass. Measuring 387 mm x 159 mm x 159 mm and in bronze, Daniel Arsham’s Hourglass challenges our relationship with time and with the devices that measure time themselves. Resembling an artefact from the future, the polished exterior stands in stark contrast to the partly ‘eroded’ surfaces, revealing a fully-patinated camera and a clock within. ⁠Limited to 100. Pictures below. 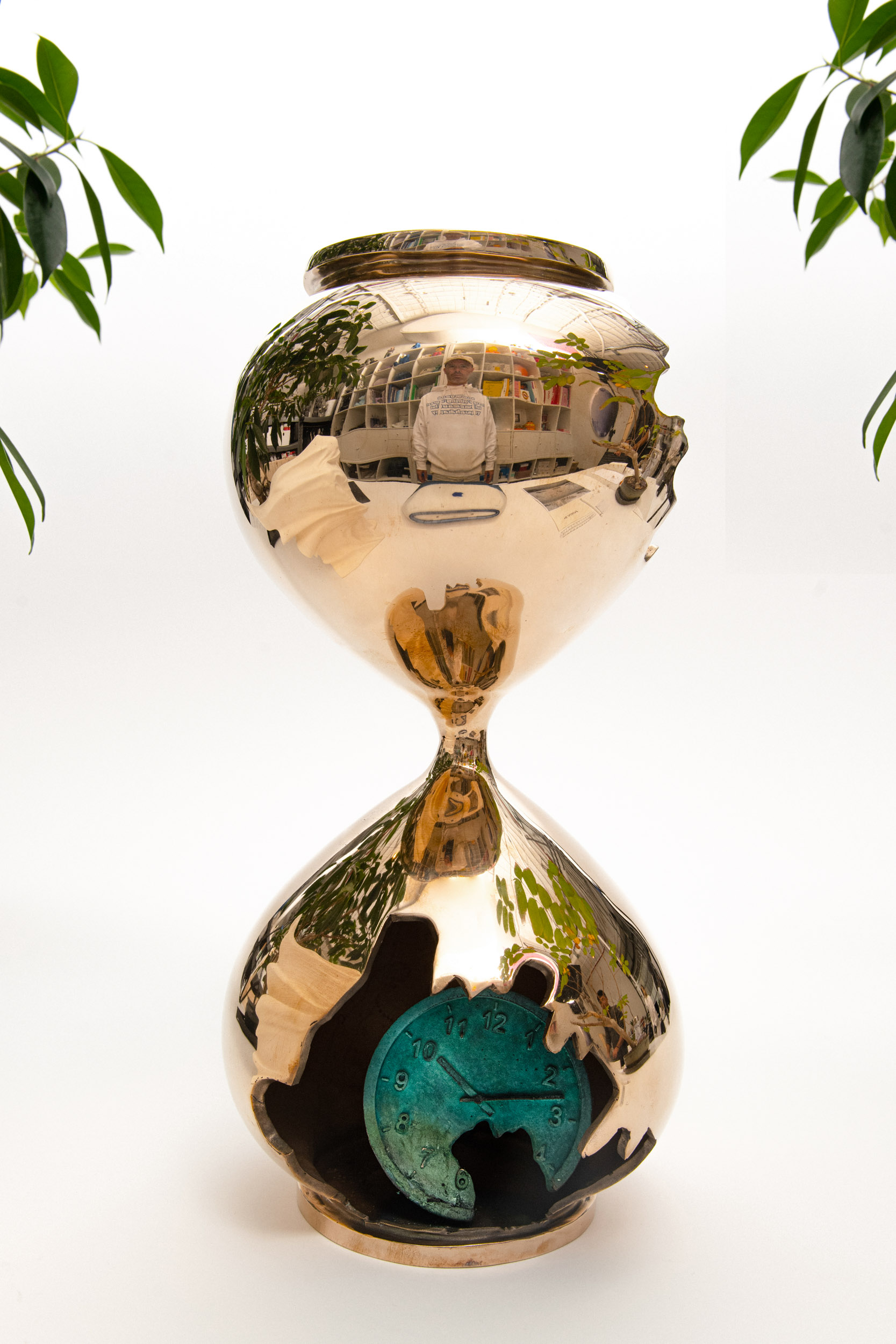 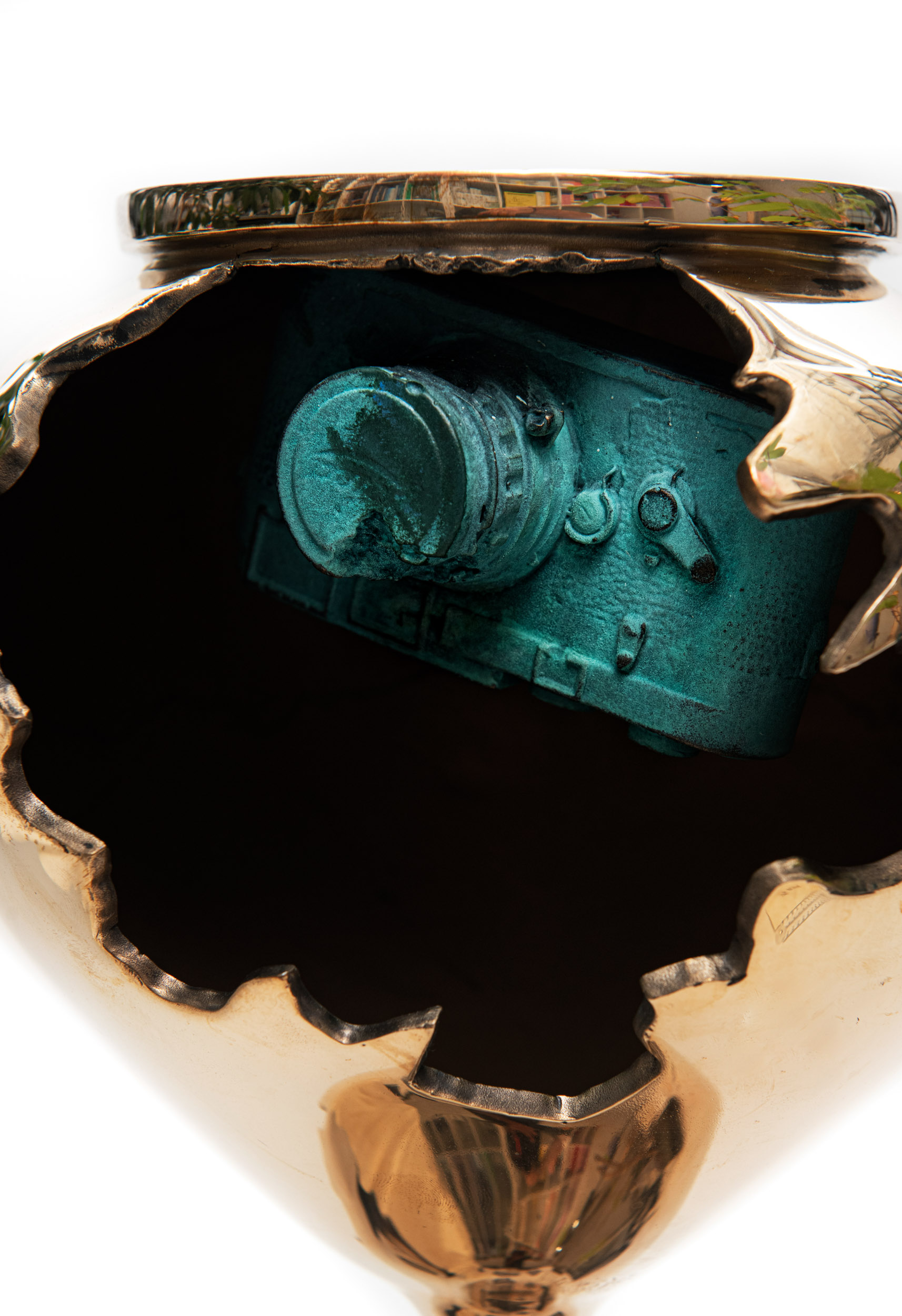 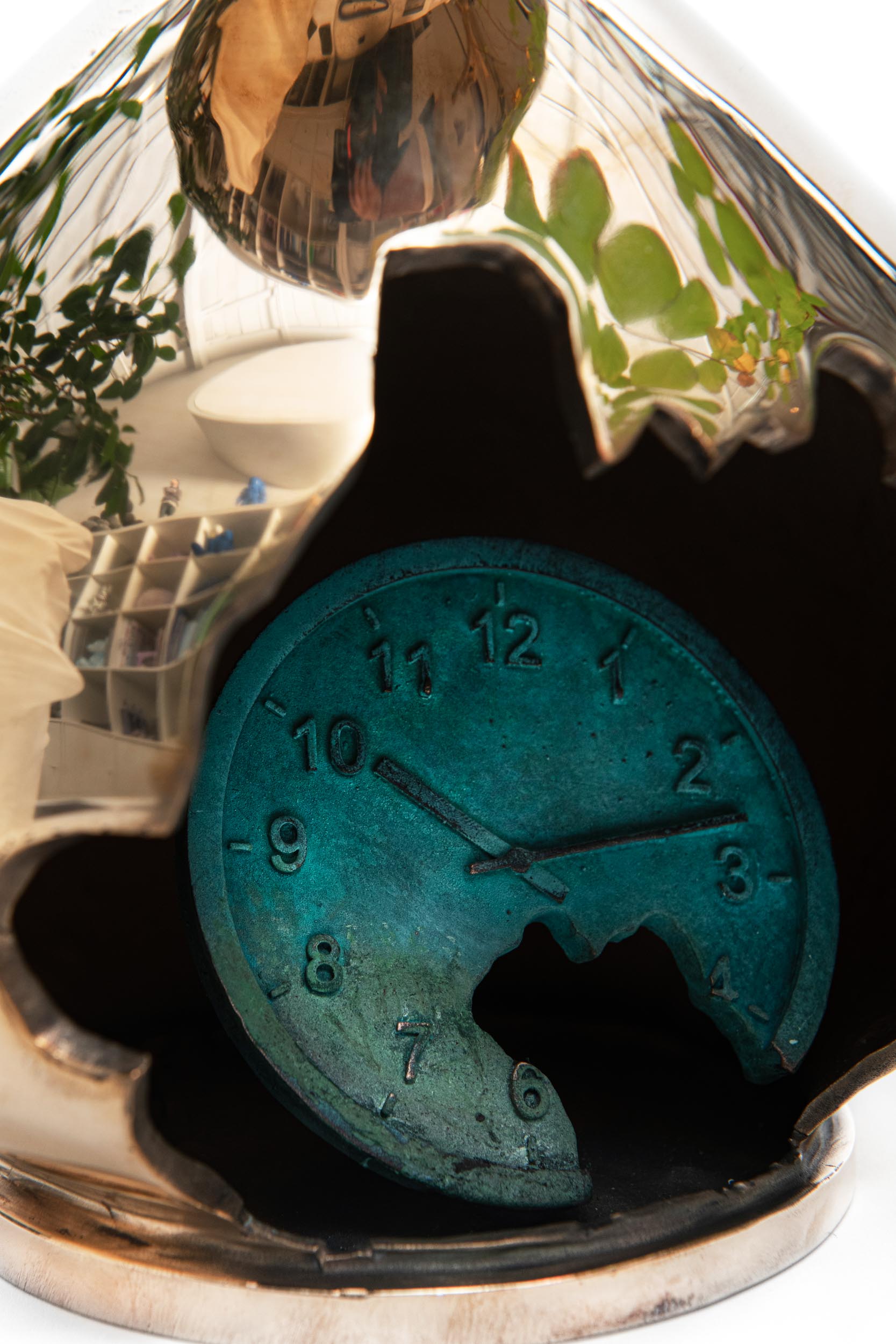