Rado is one of those brands that you occasionally come across but don’t often read about. It’s a shame because they’ve got a history going back to the 60’s of putting out unique shaped watches made with innovative materials. They’ve been using materials new to the world of watchmaking before pretty much everyone else. It’s DiaStar 1 for example, was Rado’s very first scratch-resistant watch and one of the first for the industry as a whole. Since then the brand has released numerous coloured ceramics, collaborated with renowned designers, become synonymous with the international tennis circuit and, paying tribute to their early divers, released the perfectly proportioned Rado Hyperchrome Captain Cook Limited Edition.

So why isn’t their heritage well known? Unlike other brands, Rado doesn’t talk about this history very much. Their watches aren’t particularly classical in appearance. And aside from this year’s more vintage-inspired collection, their hi-tech ceramic watches tend to naturally veer towards a more futuristic aesthetic. This pared-back minimalism is perhaps the main reason why you could be forgiven for thinking the brand is younger than it is.

Rado actually traces its roots to 1917 when the three Schlup brothers (Fritz, Ernst and Werner) founded a watch movement and component maker, Schlup & Co in the town of Lengnau, Switzerland. 11 years later in 1928, the Rado trademark was registered in Switzerland. However, it wasn’t until 1957 with the release of the Golden Horse that the distinctive rotating anchor logo first appeared on watch dials. Paul Luthi was the man in charge from the very beginning, having risen through the ranks at Schlup & Co, taking control in the 50’s, turning it into a fully fledged watchmaker. The brand would go on to focus on ceramics, new water-resistant technologies and unconventional case shapes.

Rado was acquired by the Swatch group in 1983 and in 1986 they produced their first ceramic watch, the Rado Integral. Following on from the Integral, Rado launched the Ceramica in 1990, their first watch to utilise black hi-tech ceramic. In 1991, Rado applied what it had learnt from the Ceramica but this time making a white high tech-ceramic case for the Rado Coupole.Rado kept ticking off the milestones (have a look here for the full list) and in 2002 they released the V10K. A ceramic watch with a synthetic layer of nano-crystalline diamond coated surface, giving it a frankly crazy hardness of 10,000 Vickers! To put that in perspective, conventional stainless steel has a hardness rating of 700 Vickers.

The Hyperchrome Ultra Light and Ceramica Limited Edition (released in 2016 and 2017 respectively) represent an interesting departure from the glossier ceramics Rado is more renowned for. Both feature a muted greyish colour scheme which is more akin to starkly monochromatic Brutalist architecture. There’s a warmth nevertheless to the Ceramica, in the same way, that there’s warmth to be found in thoughtfully designed urban concrete structures.

Weighing in at 56 grams, thanks to the lightweight, scratch-resistant silicon nitride ceramic case with hardened titanium inserts, the HyperChrome Light appears stark at first. Its dial has been compared to a Japanese zen garden, but I can’t but help think that it better resemble the grooves on a vinyl record. The Ceramica Limited Edition is a matt grey ceramic update of the original designed by renowned industrial designer Konstantin Grcic. Its geometric look is thoroughly contemporary and wouldn’t look out of place dressed in formal wear or streetwear.

This years Hyperchrome Ultra Light series from Rado can be seen as a mesh between the vintage styling of the HyperChrome Captain Cook Limited Edition with the lightweight minimalistic look characteristic of the Ultra Light. Both variations of the new HyperChrome Ultra Light come in muted earthy tones, a nice departure from the aforementioned Ultra Light (above).

Both of the 43 mm sized HyperChrome Ultra Light’s released this year weigh in at 56 grams and house the Rado-modified and exclusive ETA A31.L02, packing in 64 hours of power. An impressive feat considering the lightness of the watch. Looking through the exhibition glass, the movement features black anodized aluminium bridges and a black rotor. As for the case, HyperChrome uses a combination of silicon nitride and titanium nitride making it both harder, more scratch-resistant and half the weight of standard Rado high-tech ceramic. It’s an interesting new direction for Rado, combining vintage styling with advanced ceramic.

Also at Baselworld 2018, Rado debuted the True Thinline Nature collection, adding nature inspired dials to the Thinline collection. The result of a creative partnership with Grandi Giardini Italiani, these earth, water and leaf inspired dials brought some much-needed greenery to the drab landscape that is Basel in winter. Complementing the unique mother of pearl and metallised dials are matching coloured ceramic bracelets to drive the natural theme home. 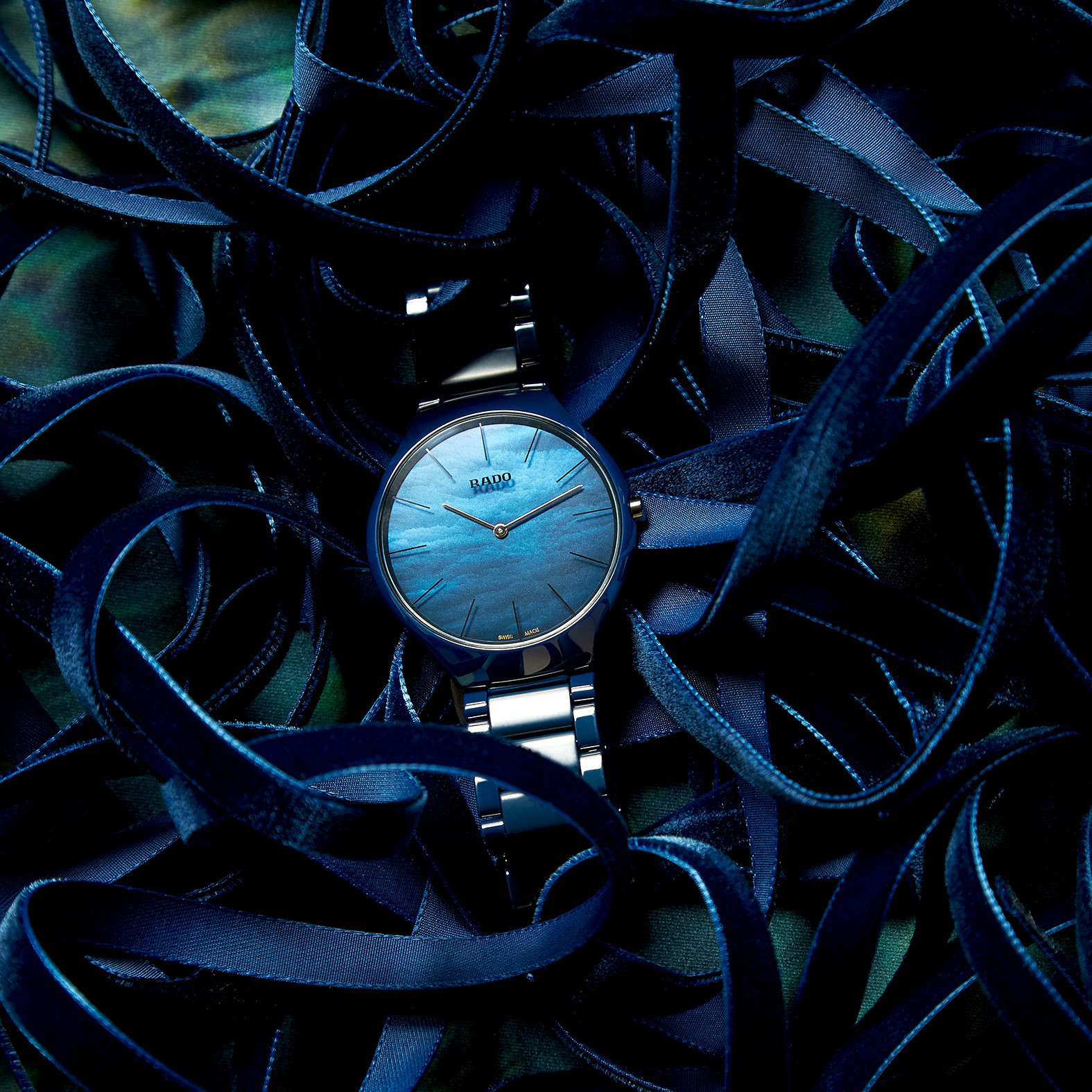 An illustrious dial on a glossy ceramic case sounds too much on paper. However, the end result is actually quite pleasing. Due in part to the bracelet being several shades darker than the dials. Giving the watch a nice visual contrast without disrupting the overall sleek aesthetic characteristic of Rado’s Thinline watches. Watches of Switzerland Singapore stocks Rado timepieces. You’re more than welcome to pop by, say hi and take a look at Rado’s ceramic watches in person. Our boutique locations can be found here.