The Tangente is a truly Nomos watch: perhaps no other model is as emblematic of its daring yet refined,  traditional yet playful, and bold yet understated identity. Over the past couple days I have travelled from Berlin to Glashütte to meet the people behind the brand. I have held their watches, looked through their drawers, flicked through their publications and wandered between their desks. I dare say that by now I have a fairly clear idea about what the brand is and what its watches mean. Nomos boasts a considerable collection of fine German timepieces, but if there is one starting point for the company – one founding aesthetic from which all others developed – it is the Tangente. A true classic of contemporary watch design, throughout my time in Germany I took a closer look at its history. 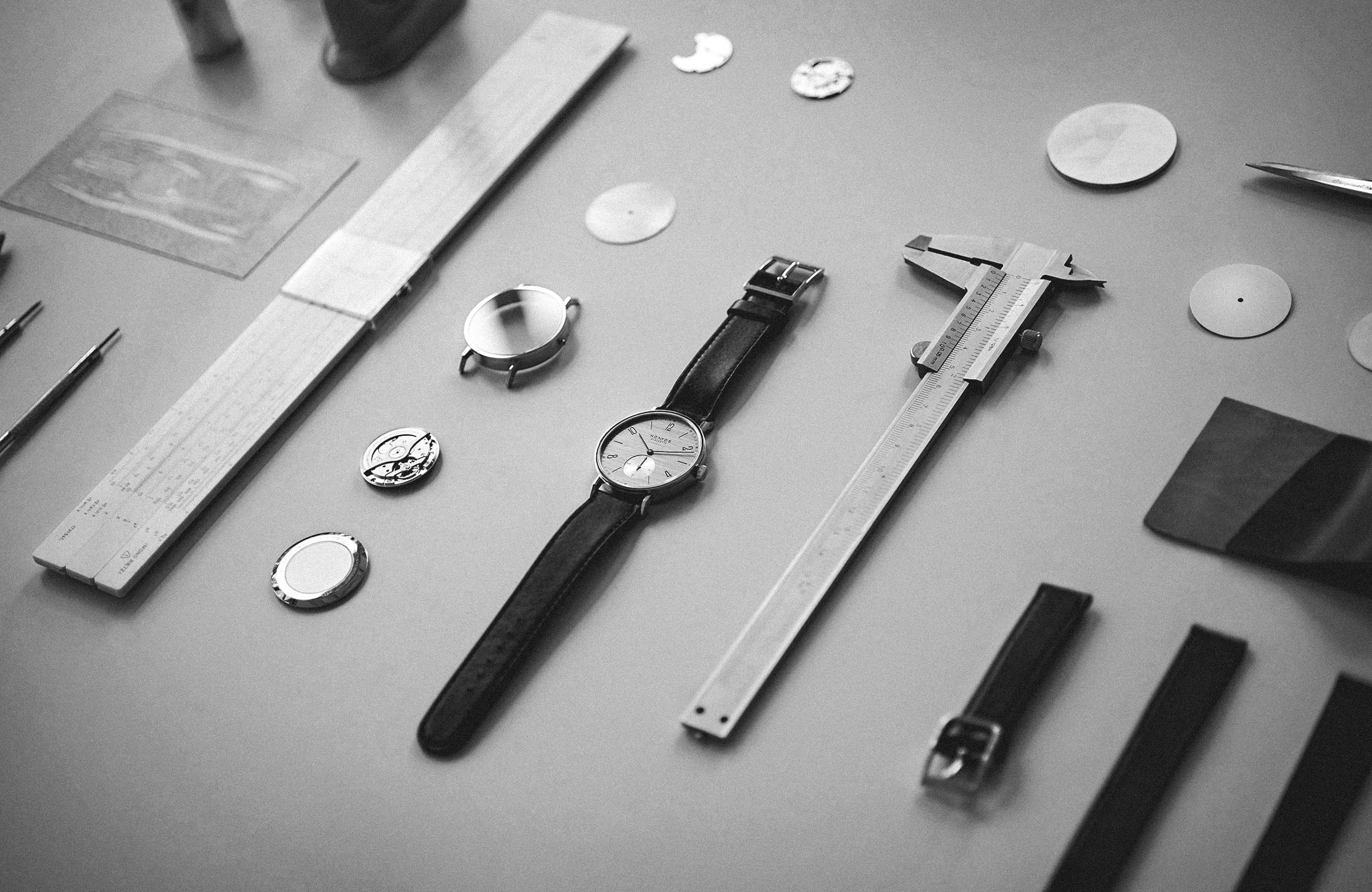 In 1990, Roland Schwertner stumbled upon the design of a dial from the 1930s which had long since fallen out of the mind of the watch market. There was something about its elegance and simplicity which, despite the years, retained a somewhat contemporary flair and provided a spark of inspiration. Together with graphic designer Susanne Günther, the typography was reinterpreted and a new case was designed to create the what would become Nomos’ prizewinning, best-selling classic.

The Tangente was launched in 1992 alongside the Orion, the Tetra and the Ludwig to form the first range of Nomos watches. The steel case was offered in a diameter of 35mm – somewhat unconventional for the time. Inside a manually wound movement kept the hands moving reliably across the revived, refreshed and now distinctly Nomos typography. It was undeniably a tribute to German design traditions: a quality consistent with the Deutscher Werkbund, a form that followed the functionalism of the Bauhaus movement, and a clean aesthetic that reflected the optimism of a country recently united by the fall of the Berlin wall.

The first great leap for the Tangente came in the form of the Alpha movement. It was the first properly in-house movement from Nomos and the inclusion of the Glashütte three-quarter plate, Glashütte tempered blue screws, Glashütte ribbing and Glashütte sunburst details acted to firmly establish its relationship to the historic watchmaking town.

The next big step would be the release of the Tangomat in 2005. As the name suggests, it was essentially an automatic version of the Tangente: on the outside all looked very familiar, but on the inside was an incredible moment of innovation. This time the size would be pushed up to 38.3mm to host the slightly larger in-house DUW 5001 movement – the addition of a rotor required a bit more space. The first automatic movement from Nomos gave off a whiff of independence and provided the foundations for what would soon follow.

A decade later, Nomos was ready to release something rather special: the Tangente neomatik. What made the neomatik special was the incorporation of the incredibly thin, remarkably efficient and highly precise automatic DUW 3001 movement. At only 3.2mm in height – supposedly as tall as five stacked postage stamps – the movement allowed the watch to retain the typically slender profile of a Nomos watch whilst making extraordinary progress from a technical perspective.

The neomatik was also one of the first models to include in its movement the Nomos swing system. Many years in development and many millions spent on research and development, the breakthrough of the swing system was a defining point in the maturity of Nomos as a watchmaker. The vast majority of watch companies today rely on Swiss specialists to supply them with escapement mechanisms for their movements. In the spirit true Glashütte craftsmanship, Nomos embarked on an expensive, time consuming and intricate journey in pursuit of independence. The reward was the ability to produce an in-house escapement – a feat very few companies are capable of. Over the years, models of the Tangente have featured differently coloured hands and dials, date window displays have been added and power reserve indicators were included too – minor changes which have consistently expanded and built upon the original design. In 2018, bold aesthetic changes were made in the form of the Tangente Update.

Starting from the inside, the new DUW 6101 automatic movement placed the date ring not on top of the movement, but around it, in order to retain a slim profile of only 3.6mm. The size of the case grew to 41mm to accommodate the most obvious update to the design: the date ring. Instead of a window display, the Tangente Update includes a date ring which encircles the dial and marks the date with a striking splash of red – a now patented design by Nomos.

This year the Tangente was given a robust revision to become more durable, waterproof and ready for sport. The addition of superluminova hour indexes, 1000ft underwater capacity, a screw down crown and a steel bracelet sought to make the watch capable of accompanying you during your morning run, your evening swim, and everything in between.

Just like the Tangente Update, the Tangente Sport is powered by the DUW 6101 automatic movement – except this time housed in a sturdy 42mm case. The release was an exercise in pushing the boundaries of a classic design and the result was opening the Tangente up to a whole new market.

The development of the Tangente is really the story of Nomos: each big step for the Tangente collection was in turn a big step for company as a whole. The Tangente is both a horological vehicle for innovation and a reference point for the identity and integrity of the brand. Whether from a loft in Kreuzberg or an old train station in Glashütte, there is a distinct feeling for what it means to be part of Nomos. For its dedication to mechanical quality, purposeful design, industry innovation and independent thinking, Nomos has become one of the most exciting brands in watchmaking today. For all that is remarkable about Nomos, the Tangente is a shining example.