Just before SIHH 2019 kicked off we sat down with Denis to talk about his inspirations, his journey so far in independent watchmaking and how he escapes the rat race by zoning out in his Mongolian yurt. More than anything else, his answers below give a fascinating insight into what drives the creative force behind De Bethune and why their watches are in a league of their own. 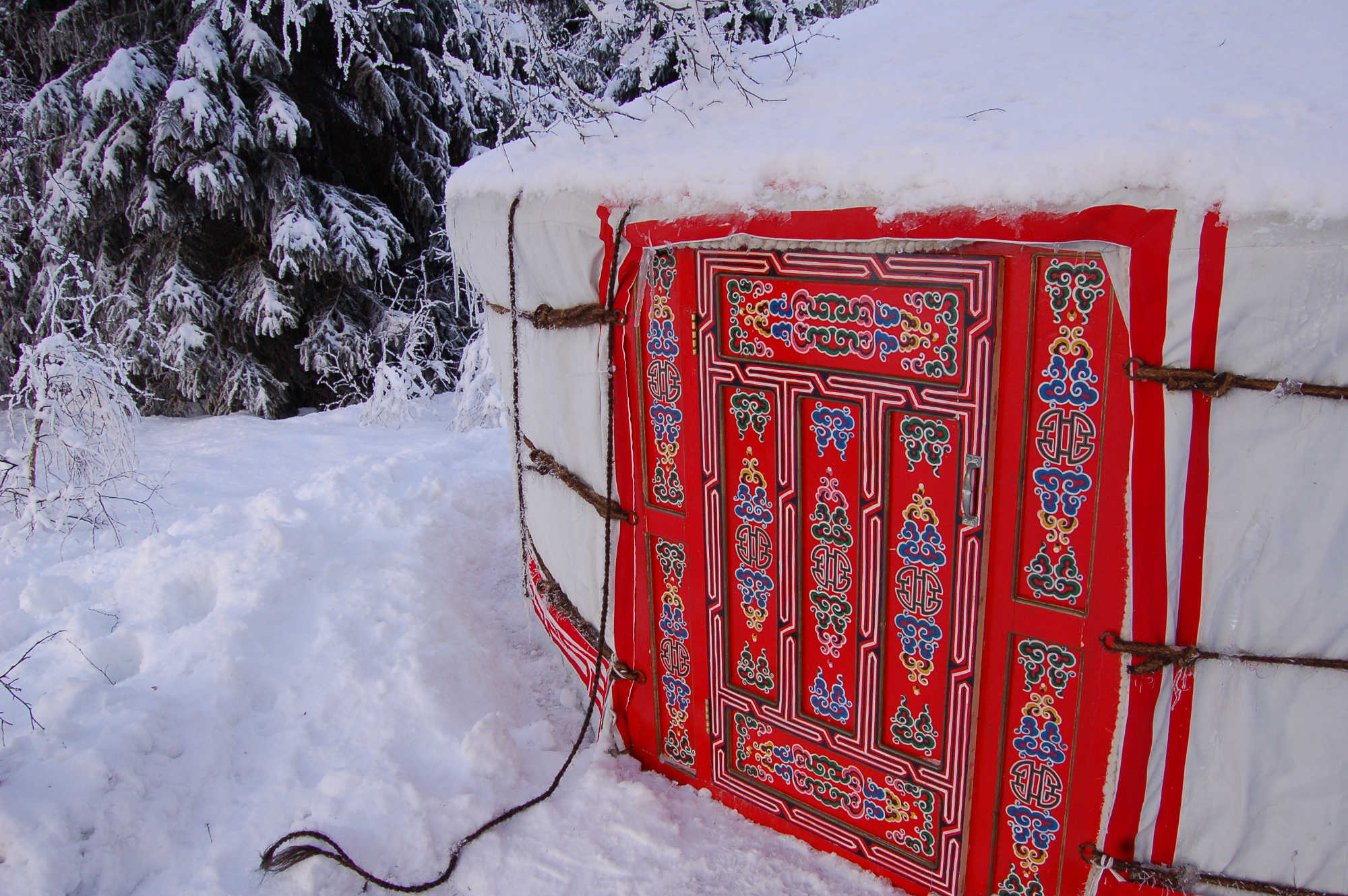 I’ve heard you occasionally escape to the wilderness in your Mongolian yurt. Where did this come from and have you always been interested in immersing yourself in other cultures?

Well, I find Asian culture as a whole fascinating – I’m passionate about it. To me, it is the cradle of many manual skills and I’m very interested in it. That’s why I also work with some Asian traditional methods. So in a way, I act as a link and bring them to horology. As a matter of fact, I’m living on the Jura plateau, which is very pretty, and I own a little wood by the plateau. There’s a birch forest there, it made me think about the Tundra, about Mongolia. I felt like it would be a pretty spot to set up a yurt for the winter months. So I only install it during winter. It’s a peaceful place where I can sit down, rest and think. It’s a place where there is no phone, where there is nothing, where people can be at peace. So to sum up, I like going there for a walk, it’s close to home – 30 minutes walking distance – roughly the same distance whether I leave from home or from my workshop. It clears my mind and I also like inviting friends over there for parties.

This type of housing is a concept I’m using in horology as well. I mean I really love it and find this accommodation truly interesting: it is simple, light, easily transportable, with an ingenious structure-when you unfold the walls for instance. I find the material solid, stable, insulating. It is a comfortable place, large, its round shape makes it even cosier and pleasant. As a matter of fact, the yurt reminds me of Feng Shui, hence it suits my personality perfectly, and it also reflects what I love making in terms of watches. I feel the same while writing Chinese calligraphy or investigating ancient metals that were first discovered in Asia.

Do you find that different cultures perceive time differently? And to really perceive it do you think it’s important to remove distractions?

Of course! Each human being has his or her own moments. If he or she manages to take the time – there’s an interesting French phrase – which says that we may experience the same moment but our perception of time and our understanding of time during that moment can differ. This is really important to me. And several times a day I try to disconnect from the daily routine. Because if we remain in our stressful modern – world environment, first we cannot reassess ourselves, nor can we be creative in a healthy way or be positive. It is crucial for me and might even be more important for me than for others. For instance, my day always starts with an extremely peaceful activity. I do not sleep much, I get up early, I begin my day by doing some exercise such as yoga for an hour before even starting anything else. Knowing that I will have to work intensively for the next 4 or 5 hours, I need to – if I get the chance – start the day by going for a 30-minute walk into the woods. Or it could be an hour round-trip walk to the yurt. This is much better than strolling through the city.

These moments are special for me as time stands still: these are the moments when you can meditate, exercise or take a walk in the forest. Time feels different, those hours (or even half-hour breaks) belong to another world. To me this continuous change of pace allows us to question ourselves in an effective way. It paves the way for creativity

You entered the watch industry at the tail-end of the Quartz Crisis. Independent watchmaking wasn’t like what it is today. Was it hard to stay positive during those early years? It must have been quite a struggle?

Well, I became an independent watchmaker in 1986; at the time I was repairing antique pieces of horology, for collectors, for museums, for auction sales when suddenly a few collectors started asking me if I could create a watch for them. So I started making watches without really marking them, as I was actually creating one piece for them, for a special collector that had asked me about one particular work for instance. So I would simply sign my name inside the watch, not really visible most of the time. And I must also say that from the start I didn’t have any idea about a brand name, or maybe just a name, or to assert it. As I was only interested in doing something that I liked, and in making pieces in the best possible way to match what the collector really wanted.

In the early 90s, I set up a company with a few horologist friends where we would make specific, unique pieces for big name brands. The idea of turning independent came up later when I was working making these specific pieces and founded this small company. From about 1990 to 2000 I would create these very pieces for brands, I found the work was very pleasant at first. However, the brands became big name brands, being purchased by major corporations and by then it became more difficult to communicate with the marketing staff. Working became less pleasant as creating was made difficult since you could always feel the corporations’ negative influence, opting for making money over creating beautiful pieces.

Therefore, the idea of becoming independent and of setting up a brand came up after that, so essentially, to sum up, it had turned out very tough to be able to keep working on and making beautiful things as a whole, since those brands couldn’t understand that. And that’s why De Bethune was established in 2002: it had become a necessity to be able to make something while the desire was still there. Because at the time – before I started De Bethune – I had gotten to the point where I was questioning myself  whether I should change career, do something else with my hands instead of sticking with horology

The Swiss watch industry – especially in the early years – seemed to take full advantage of knowledge sharing. Sort of like Silicon Valley in the 80 and 90s. It’s known that you shared the research and findings behind your work with the Resonique. Do you feel obliged to keep the enthusiasm alive and to spur further innovation from the next generation of watchmakers?

That’s my goal, it’s what keeps me going. I like passing things on – maybe more so since I am getting older, but yes I like it as much as creating pieces of work. That’s my aim, and it used to make me happy – and still does actually. When I see big name brands – there have been many, but I can name the last one, the last creation by Zenith, which resembles the Resonique. When I see that, it makes me want to go further, in spite of the fact that it may be adopted by a big corporation, I don’t mind, it doesn’t matter. Because when you have the feeling that everything has already been created, you may then realise that innovation can still happen: this may be enough to stimulate enthusiastic young people, young horologists, and this is what I find interesting.

Last year, alongside friends including François Junod (master in automation) we launched a training course called the Mechanics of Art which doesn’t just focus on horology but also includes music boxes and automation. We set up this training course as we felt the necessity to pass on knowledge in a different way, compared to the usual way they’re taught at school. As a consequence, I’m really into it, whether it involves sharing my products, my knowledge or my experiences. For knowledge is mostly about experiences to me, and above all, we improve ourselves through both good and bad experiences. This is really what drives me, it’s very interesting.

Final Question. With the rise of social media, are you finding it easier to communicate your passion for horology? And how is it changing the landscape?

I believe social networks are very superficial. Surely they will awaken some people’s interest, like let’s say maybe a younger crowd, making them aware of different types of jobs, of our expertise at a younger age, hence their understanding of it will be better, but it still remains superficial. The main problem regarding social networks is that communication isn’t held to account and people can say whatever they like.

However, I believe it is still positive overall, as it will reach a higher number of youngsters. More people and younger ones will take an interest in this and inevitably some will cling on to it, that is to say, they will really get into it, they will try to find more information and gain a deeper understanding. Now, when it comes to passing on real information, to me there is nothing like the traditional way because it takes time, you can’t get an understanding of things rapidly. People need to have access to proper information through someone knowledgeable, someone who is able to pass this down. Then the person needs to experiment on his/her own. They need to try to come up with their own understanding, their own ideas.

After that, thanks to these first few steps, then they can grasp a develop a different interpretation of the important information being passed onto them. I think this way of passing information, I mean face to face, is the most efficient method. Especially so when passing experience down. That’s the reason why, in workshops, if we have a young apprentice, for instance, the efficiency is higher if he remains by our side, at the workbench since it’s easier to pass down more from there. That’s also why we give this training course in Mechanics of Art, where we link theory with practical knowledge, so as to allow for the information to sink in more easily and more efficiently.

So for me, the traditional way is essential in passing on the true meaning of the work. Along with this, I believe social networking will spread the information that already exists – which is a good thing, it will also reassure people who dedicate themselves to this field. By knowing that such a large social network also expresses interest in the same things that they work on; it reassures them that these things are not completely useless or crazy. I think that this is a good thing overall. In spite of not using social networks myself, I can still understand how it can be useful.

[Minor edits have been made for clarity]

For more on the Formation en Mécanique d’Art