The Endless Pursuit of Precision

It is perhaps one of the most inconvenient truths in watchmaking that precision timekeeping reached its prime with the arrival of the quartz revolution some four decades ago. But with the revival of mechanical watchmaking in the 1980s, now aided by modern manufacturing technology, came a renewed zest to solve the fundamental problems that have eluded watchmakers for centuries. In fact, over the past two decades alone, the sheer breadth of work that has gone into improving precision in a wristwatch is simply astounding. Watchmakers have refined age-old solutions and developed new techniques and materials to optimise various stages and components of the transmission system.

Two esoteric yet prevalent approaches to chronometry is one that takes place in the power and transmission stages of the movement and addresses the problem of unequal torque delivered to the regulating organ as the mainspring winds down – constant force mechanisms – and one that occurs at the distribution and regulation stages, remedying positional errors – double escapements and tourbillons.

To equalise the uneven pull of the mainspring as it unwinds, the two most common techniques employed are the use of a fusée-and-chain and remontoire d’égalité.

The fusée-and-chain dates back to the 15th century when movements had no hairsprings and were still using verge escapements. In contrast to a regular movement, the mainspring barrel is wound by a fusée, a cone that sits on the center wheel arbor with a linked chain coiled around it and the barrel. When the watch is fully wound, the chain pulls at the smaller circumference of the fusée and conversely, when the tension of the mainspring wanes, the chain pulls at the larger circumference of the fusée, functioning essentially like the gearing of a bicycle.

The best known iteration of this mechanism in modern times the A. Lange & Söhne Richard Lange ‘Pour le Merite’ line. It employs a chain composed of 636 parts and measures just 0.25mm thin. The downside to this mechanism is that the movement stops when it is being wound as the fusée rotates in one direction during winding and in the reverse direction when the watch is running. To prevent this, Lange added a set of planetary gears, which consists of 38 tiny components in the fusée to maintain the flow of power while the fusée is wound. 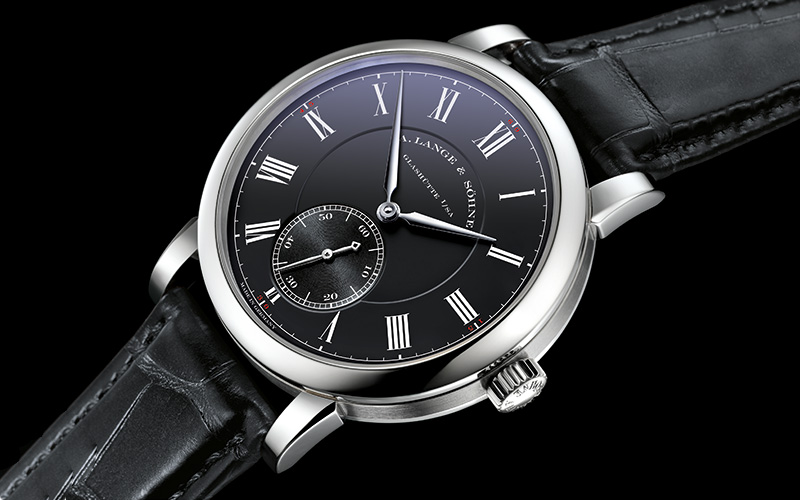 Additionally, the Pour le Mérite features a stopwork mechanism to prevent the mainspring from being fully wound or fully unwound. The first is a lever, which is triggered when the chain is at the peak of the fusée and an arresting tooth engages with the ratchet. The second is a lever at the power reserve wheel that blocks the seconds wheel when the power reserve dwindles below the acceptable point. This essentially ensures the chronometric precision of the watch as long as it is running.

Another example is the Zenith Academy Georges Favre-Jacot launched in 2014 for the brand’s 150th anniversary. The fusée-and-chain was exhibited in a large aperture on the dial, held by two bridges. The chain that links the fusée and barrel measures 18 cm and consists of 575 parts. Notably, the movement of this watch is the El Primero 4810, a COSC-certified 5 Hz movement with a silicon escape wheel, combining both a time-honoured technique and a modern innovation in one watch. 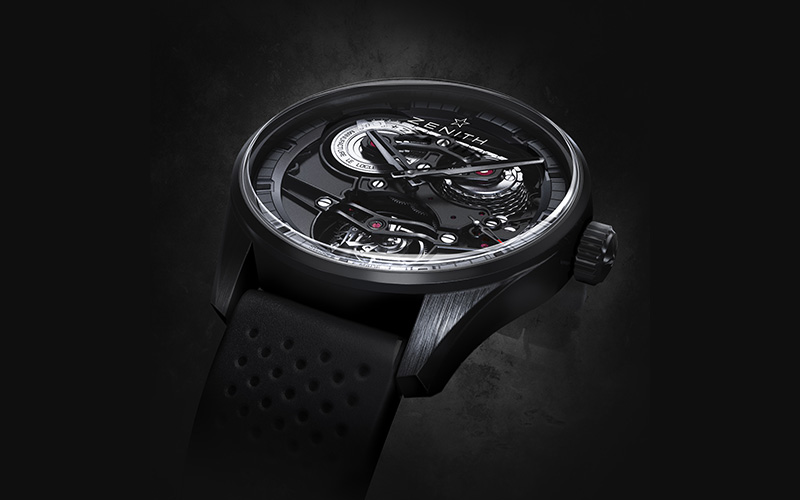 However, in 15th century clocks, having a constant force mechanism located at such an early stage of the transmission system meant that power could still be lost in the going train especially with a verge escapement which necessitates the gear train to be briefly driven backwards. The solution was thus, the remontoire d’égalité, which is a secondary power source located on the fourth wheel before the escapement to ensure constant force regardless the energy left in the mainspring. It is a small spring that stores and releases a fixed amount of energy to the escapement. John Harrison was the first to incorporate it in a pocket watch with his H2 chronometer while F.P. Journe was a forerunner in using it in a wristwatch with his tourbillon of 1999.

The F.P. Journe Chronometre Optimum features double escapements that are driven by a remontoire d’égalité which rearms once per second for a dead beats seconds. It was inspired by his first watch, the Tourbillon Souverain which operates on the same principle but features a remontoir d’égalité with a tourbillon, essentially tackling two of watchmaking’s greatest obstacles – gravity and constant force – in one watch. 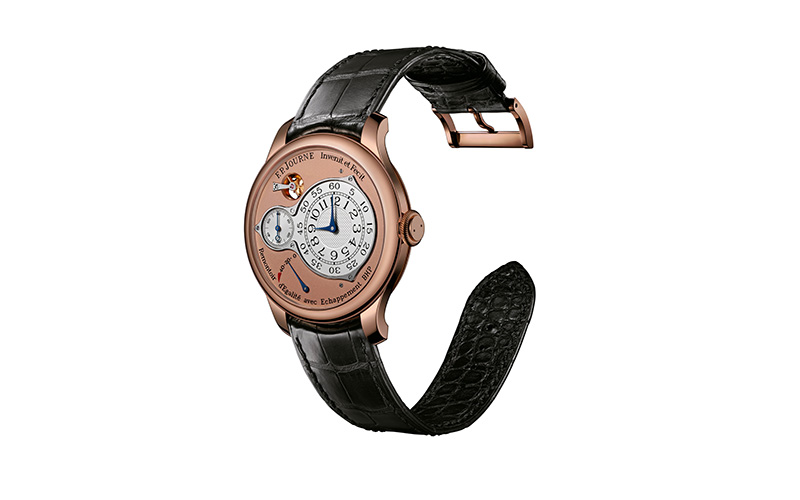 The advantage of a constant force mechanism that is integrated in the escapement is that it delivers impulse directly to the balance wheel, eliminating a host of other variables that could cause fluctuations in rate. Girard-Perregaux was the first to put one in a wristwatch just five years ago.

In the Girard Perregaux Constant Escapement, the escapement is made up of two escape wheels which look nothing like a regular escape wheel. They rotate in opposite directions, driven by the fifth wheel of the gear train. An incredibly thin silicon blade – one sixth of a human hair – which spans across a butterfly-shaped silicon frame is attached to the pallet fork on three points. As the escape wheel locks and unlocks, the silicon blade flexes, buckling in one direction, and then the other as it stores and releases energy to the balance wheel. As opposed to a detent escapement, impulse is thus given in both directions. The flexing motion of the silicon blade would always ensure a constant delivery regardless of the torque from the mainspring. 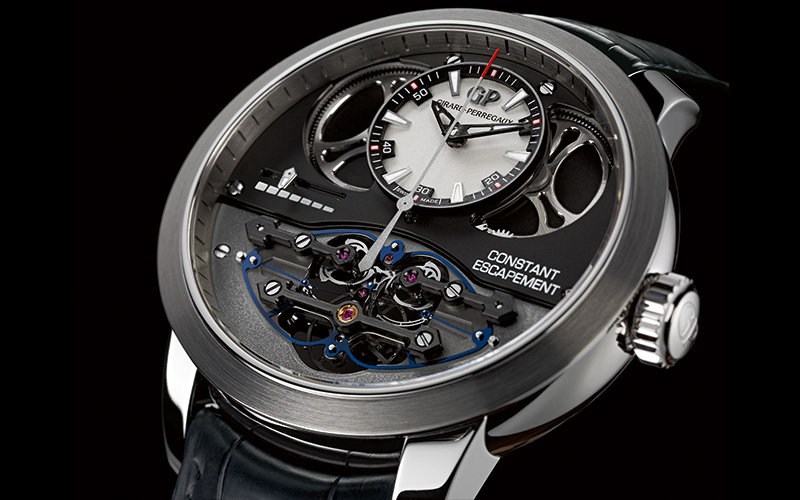 While constant force mechanisms and escapements deal with power fluctuation, double escapements tackle the same problem as tourbillons – positional errors. In theory, a watch is designed with two escapements in order to mechanically average out their errors in rate. The two escapements in this approach serve a single gear train and is not to be confused with a watch that has two individual movements with each dedicated to a different function or two individual movements that achieve resonance through two linked balanced wheels.

In 1996, Philippe Dufour was the first watchmaker to introduce a wristwatch with this setup – the Duality. The two balance wheels were linked by a small differential on the fourth wheel. Therefore, one escape wheel compensates for the errors that the other produces. The Duality eventually became the inspiration for Max Büsser who launched the LM2 (Legacy Machine 2) in 2013.

While his preceding LM1 model had an outsized balance wheel right smacked in the center of the dial, the LM2 features two balance wheels over the dial with part of the differential exposed at six o’clock. The exposed wheel drives the pinion on the right while the other wheel, positioned on the hind side of the stacked differential, drives the left pinion. 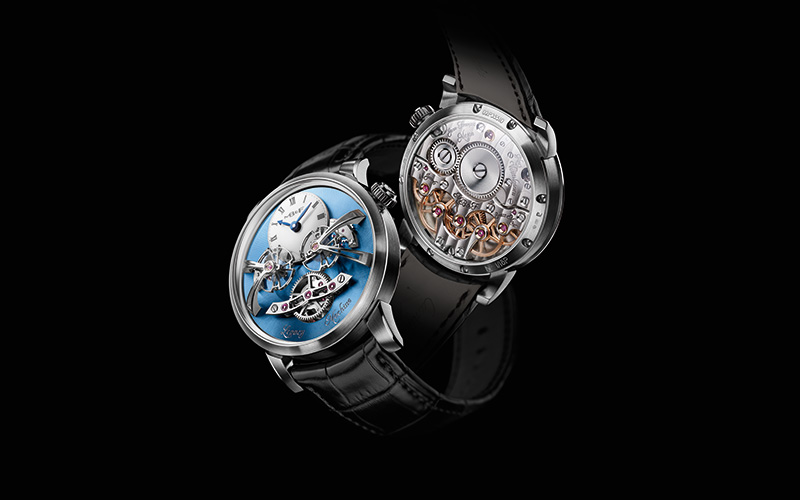 Elsewhere at Roger Dubuis, such escapements, or rather, double and multi-tourbillons have become a bread-and-butter complication for the brand. In fact, it was one of the pioneers of such movements and moreover executing them in an ultra-contemporary fashion.

In its skeletonised double tourbillon movement, twin one-minute tourbillon regulators rotate in the same anti-clockwise direction linked by a differential while in its Quatuor movement, there are four inclined escapements, each occupying its own axis at four corners of the dial. The pair of escapements at the top share one differential while the pair at the bottom share another. And then a third differential powers the two differentials. By diffusing the effects of gravity across the four balances – 16 Hz in all – these effects are negated, resulting in a more accurate rate. 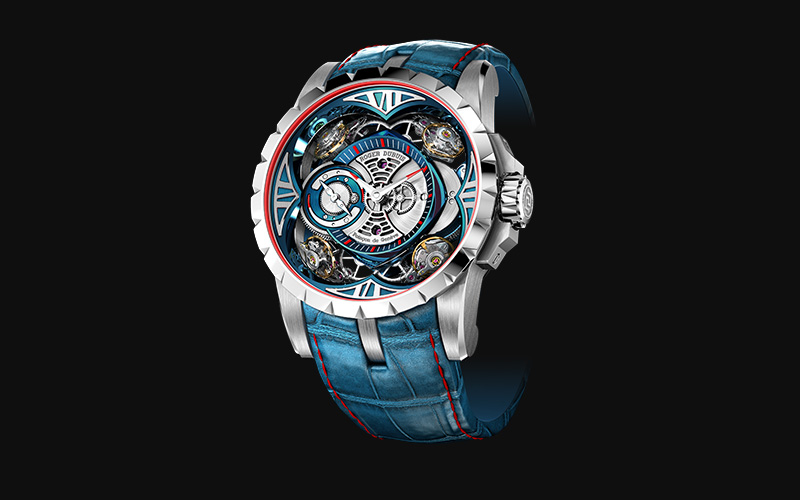 In 2016, Audemars Piguet introduced an unusual take on this configuration with the Royal Oak Double Balance. It was the first watch with two balance wheels affixed on the same balance staff and thus, shares the same axis of rotation. This assembly does not require a differential to average out their rates as there is only one rate. It deals primarily with rotational inertia.

Having two balance wheels, each adjusted with eight inertia blocks, essentially means a greater mass which in turn makes rotation much more stable and much less likely to be affected by shocks as compared to a single balance wheel. In addition, having two hairsprings positioned at opposite ends averages out sideways force and keeps the balance centred regardless of its position.