Tudor presents a bronze version of its famous Black Bay Fifty-Eight model, featuring for the first time a bronze bracelet fitted with a new clasp with rapid adjustment system.

Bolstered by its experience using bronze, Tudor continues its exploration of this emblematic material with its characteristic ageing, boldly opting for a total bronze look. A new colour palette, based on a rich “brown-bronze” tone, adorns the dial and bezel of a divers’ watch whose naval inspiration can be seen in every detail. A timepiece with an uncompromising design, available exclusively in around fifty Tudor boutiques throughout the world (including the recently opened Melbourne Tudor boutique), the Black Bay Fifty-Eight Bronze model also offers high technical performance thanks to its Manufacture Calibre MT5400.

A CASE THAT “CHANGES”

The characteristic elements of the new Black Bay Fifty-Eight model are a 39 mm bronze case, an aesthetic nod to the bronzes on old ships and other deep-sea diving equipment, but also the characteristic proportions of the first Tudor divers’ watches dating from the second half of the 1950s, particularly the famous 7924 reference or “Big Crown”, the first Tudor watch to be waterproof to 200 metres (660 ft), presented in 1958.

The choice of a “living” metal – in this case a high-performance aluminium bronze alloy used particularly in naval engineering for submerged parts required to demonstrate a high level of resistance to corrosion such as propellers, for example – ensures the development of a subtle and unique patina on the case of every watch to match its user’s habits. In addition to a highly functional appearance, in line with the naval world to which it pays tribute, the Black Bay Bronze presents entirely satin-brushed finishes that guarantee the homogeneous development of this patina.

The combination of a domed dial in matt “brown-bronze”, shaded concentrically from the exterior towards the centre, and a bezel presenting the same gold accents found on the hands and hour markers, completes the face of this model. The overall visual effect is of a rich, patinated object that might have battled the waves of the seven seas for years on its owner’s wrist, and which is “made” for them and their lifestyle.

THE ORIGINS OF TUDOR BRONZE

Bronze is an alloy with properties that differ to those of stainless steel and as such, the craftsmanship required to produce a watch case is as unique as it is spectacular. Once the aluminium bronze alloy has been produced, the bronze used by Tudor is made into bars, which in turn are cut into slugs, small cylinders of material a few centimetres in length. The slugs are then heated to a high temperature before being stamped individually while hot using a friction screw press, applying a pressure of many tonnes. With this single operation, as soon as it emerges from the furnace, this cylinder of raw material instantly adopts the rough form of the watch middle case.

From this point, no fewer than forty additional steps are required to obtain a bronze case that is ready to be cased up. Successive machining processes create the final shape and craft the functional parts of the case such as the threading or drilling, as well as the finishes, or the steps required to give the surfaces their final appearance, produced by machine or by hand. It is further complicated by the fact that bronze is a material whose appearance evolves rapidly according to its environment, so all these manufacturing operations, as well as the assembly and final tests of the Black Bay Fifty-Eight Bronze model are carried out with meticulous care. All handling must be carried out using gloves and according to a specific workflow, particularly for waterproofness tests, between which each watch is entirely dried in order to preserve its new, non-patinated appearance.

Should you have any questions about Tudor, our team of Watch Specialists would love to assist.

While Tudor has been exploring bronze in its collection for several years, the Black Bay Fifty-Eight Bronze model marks the first time that the brand has produced a bracelet entirely from bronze. Its satin-brushed links adopting the style of Tudor bracelets of the 1950s and ’60s, with rivets, are coordinated with the case and will develop a patina at the same pace. A new bronze clasp, also satin-brushed, with a redesigned cover and Tudor “T-fit” rapid adjustment system for the length, completes the total bronze look. Easy to use, requiring no tools and offering 5 positions, this practical system allows wearers of the Black Bay Fifty-Eight Bronze to carry out a fine, instant adjustment on an adjustment window along the entire length of the 8 mm bracelet.

In the spirit of an aesthetic tribute to the brand’s naval heritage, Tudor presents a free complimentary strap with its Black Bay Fifty-Eight Bronze model. The brand has identified the historic uses of its watches and reinterpreted them in its latest models. For several decades the French Navy had Tudor watches delivered without bracelets and then fitted them with their own straps, handmade or otherwise. One of them, found on a period diving watch and conserved in the brand archives, is made of elastic recovered from a French rescue parachute. It is to this ultra-functional relic, recognisable by its central yellow thread, that the “brown-bronze” woven jacquard strap alludes.

The fabric strap is one of the hallmarks of Tudor, which, in 2010, became one of the first watchmaking brands to offer it with its products. Woven in France on 19th century Jacquard looms by the Julien Faure company in the St-Etienne region, its manufacturing quality and comfort on the wrist are unique. In 2020, Tudor and Julien Faure, a 150-year old family company, celebrated ten years of a partnership that existed before the Heritage Chrono – the first model to be equipped with a fabric strap created by the craftsman – was launched in 2010. A fine anniversary for an enduring collaboration built on outstanding expertise.

The Manufacture Calibre MT5400, which equips the Black Bay Fifty-Eight Bronze, displays hour, minute and second functions. It has the finish typical of Tudor Manufacture Calibres: Its rotor in tungsten monobloc is openwork and satin-brushed with sand-blasted details, and its bridges and mainplate have alternate sand-blasted, polished surfaces and laser decorations.

Its build has been designed to ensure robustness, longevity, reliability and precision, as has its variable inertia balance, which is maintained by a sturdy traversing bridge with a two-point fixation. Together with its non-magnetic silicon hairspring, the Manufacture Calibre MT5400 is certified as a chronometer by the Swiss Official Chronometer Testing Institute (COSC), with its performance going beyond the standards set by this independent institute. In fact, where COSC allows an average variation in the daily running of a watch of between -4 and +6 seconds in relation to absolute time in a single movement, Tudor insists on between -2 and +4 seconds’ variation in its running when it is completely assembled.

Another notable feature is that the power reserve of the Manufacture Calibre MT5400 is “weekend-proof”; that is to say about 70 hours, which enables the wearer to take the watch off on a Friday evening and put it back on again on Monday morning without having to reset it.

THE ESSENCE OF BLACK BAY

Like other models in the Black Bay line, the Black Bay Fifty-Eight Bronze model features a dial inspired by the Tudor divers’ watches produced during the 1950s. It adopts the characteristic angular hands known to collectors as “Snowflake” that appeared in the brand’s 1969 catalogue. Finally, its unprotected crown, as well as the holes of the bars that pass through the horns are typical of the first generations of Tudor divers’ watches.

The Black Bay line is the result of subtle combinations of historical aesthetic codes and contemporary watchmaking. Far from simply being an identical re-release of a classic, it brings together over 60 years of Tudor divers’ watches at the same time as being resolutely anchored in the present. Whilst it is neo-vintage in conception, its manufacturing techniques, reliability, robustness and the quality of its finish are consistent with today’s more rigorous requirements.

The history of the Tudor divers’ watch dates back to 1954 with the launch of reference 7922. Waterproof to 100 metres (330 ft), it is the firstborn in a long line of “divers”. Affordable, robust, reliable and precise, it is representative of the philosophy of a tool-watch of the brand. The seven decades following its introduction have witnessed the constant improvement of this Tudor divers’ watch and those that have gained unanimous acclaim from professionals in the field, including some of the greatest military navies in the world. 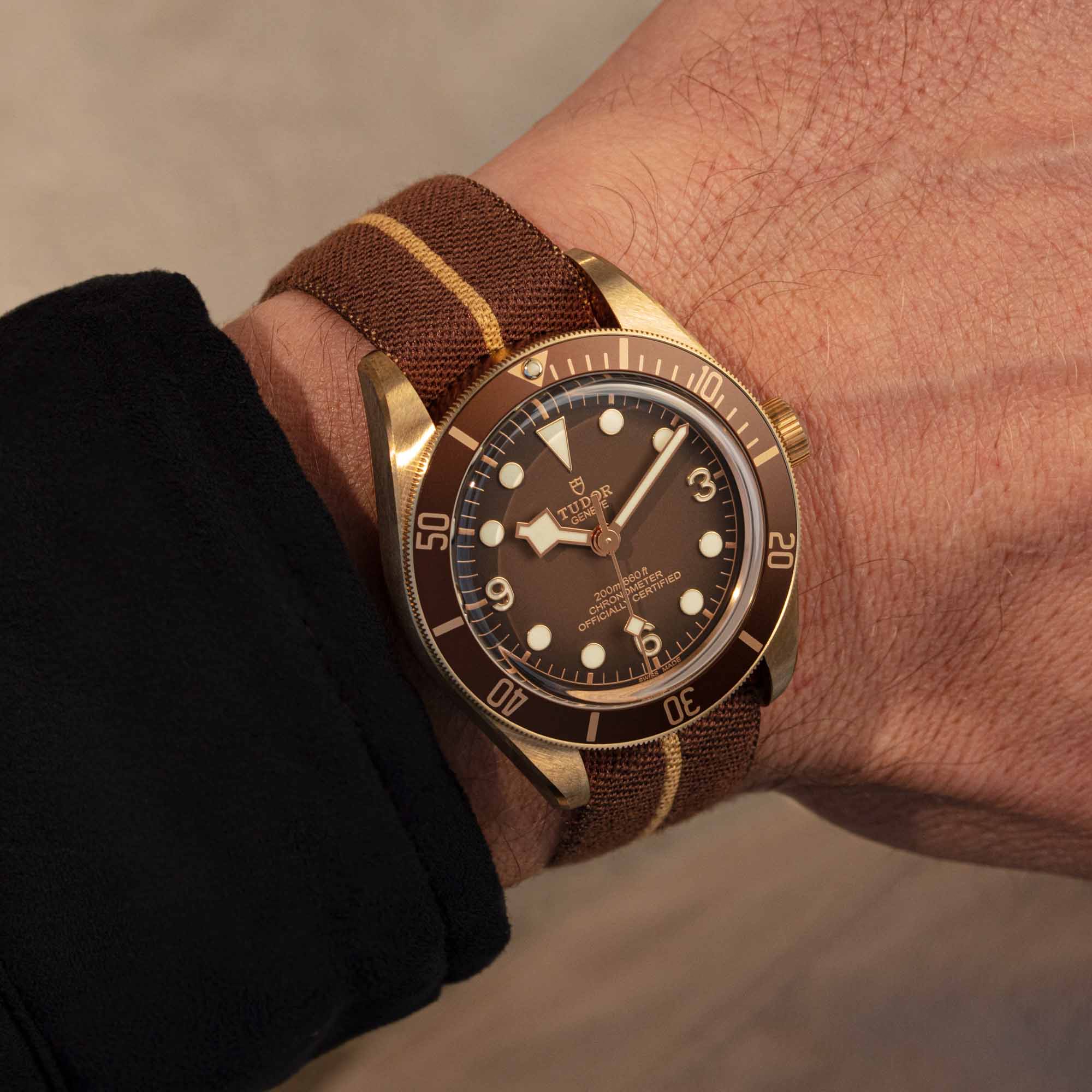 Since its creation by Hans Wilsdorf in 1926, and in line with his vision of an ideal watchmaking product, Tudor has never stopped producing the most robust, durable, reliable and precise watches possible. Bolstered by this experience, and confident in the knowledge of the superior quality of its watches, Tudor is offering a five-year guarantee on all its products sold after 1 January 2020. This guarantee does not require the watch to be registered, or any maintenance checks, and is transferable. All Tudor products bought between 1 July 2018 and 31 December 2019 will therefore benefit from an 18-month extension to their guarantee, that is to say, a total of three and a half years. (Tudor also recommends having a watch serviced approximately every 10 years, depending on the model and daily usage).