Wearers of Apple watches will be familiar with the unrelenting “Stand Reminder”. Aimed at combating the detrimental effects of sitting down for extended periods of time, it notifies you to “Stand up and move a little for one minute”. Regardless of whether you’re taking an exam, in a meeting or at the cinemas. It’s time to stand up, walk around and then sit back down.

Unlike the Apple watch, the Urwerk UR-210 isn’t so fussed about your health data. Rather, under the guise of what Urwerk calls a “sentimental interaction between the wearer and the watch”, the UR-210 is more concerned with staying wound. And as a watch, it isn’t going to wind itself – well, being an automatic watch, it will, but first it needs you to “Stand up and move a little”.

Located in the top left corner, the winding efficiency indicator is designed to let you know if it has generated enough power over the last two hours to keep the mainspring sufficiently wound. Pointing to the green region if you’ve met those requirements. If not, well then you know what to do.

Urwerk is retiring the UR-210, releasing one final variant of the popular model, aptly named the UR-210 Final Edition. Limited to just seven, this refence is more of less the same as the UR-210 Black Platinum, the main difference being a DLC-coated steel and titanium case instead of DLC platinum. Introduced in 2012, the UR-210 was nick-named the “Maltese Falcon” as its minute hand (attached to the wandering satellite) took inspiration from the beak of the mysterious  jewel-encrusted falcon statuette, private investigator Sam Spade (played by Humphrey Bogart) is tasked to track down in the 1941 film noir, The Maltese Falcon. 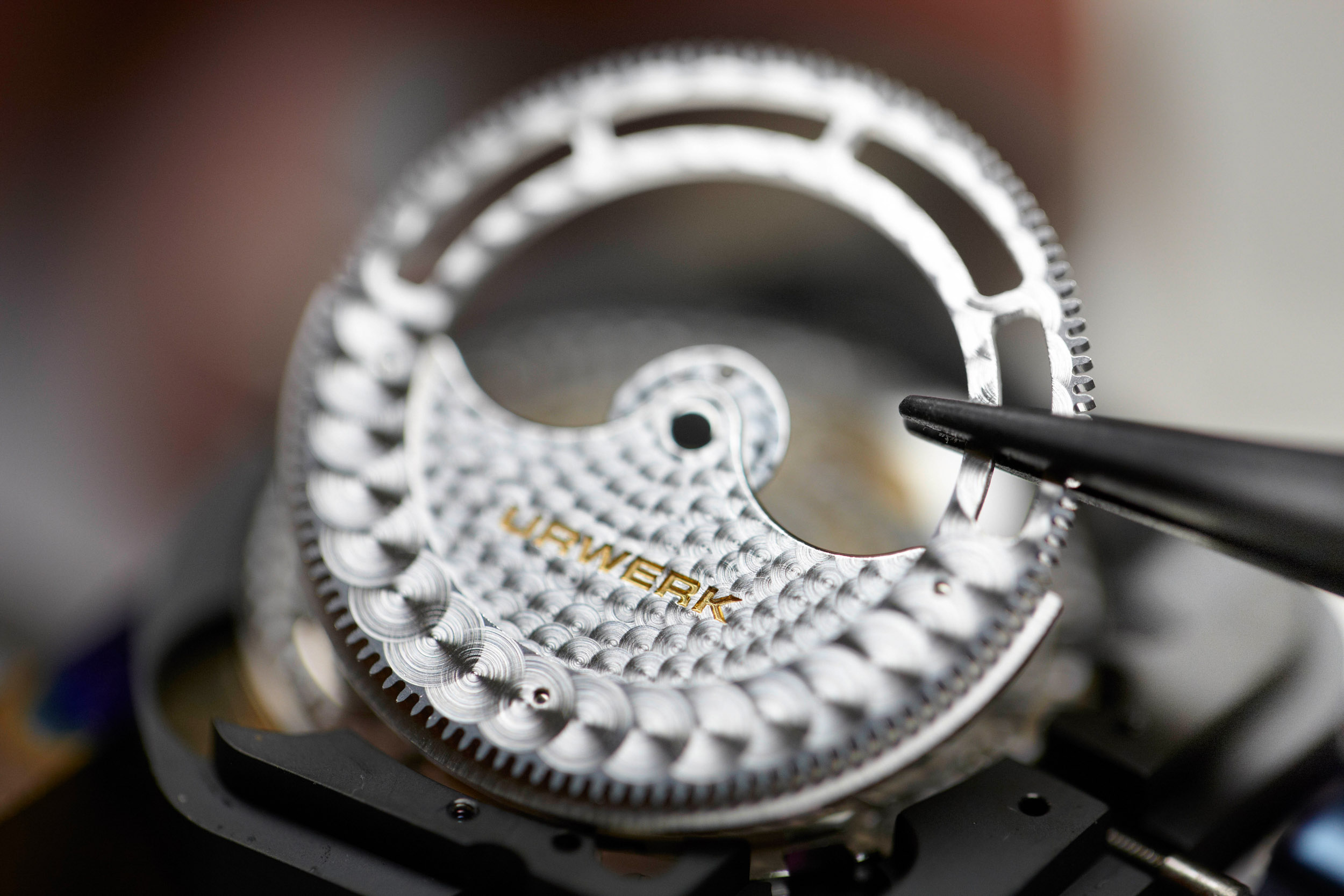 Wandering into the Avant-Garde

After Urwerk retired the immensely popular UR-103 (2003 – 2010), the UR-210 became the new flagbearer for the brand – a model which would bridge the gap between Urwerk’s second and third decade of being.

Looking back, the evolution of Urwerk can be divided into three distinct phases:

Despite the resounding success of their first watches, the Millennium Falcon-shaped UR-101 and the Sputnik-inspired UR-102 (released in 1997 and 1998, respectively) – Urwerk was in a precarious financial position during the early years of the new millennium. Felix Baumgartner and Martin Frei had quite literally put everything into their young brand, and even then were barely scraping by.

The struggle was worth it though. In those five years Urwerk had designed and developed a consistent brand DNA and watchmaking philosophy. One based on housing satellite displays and unconventional complications within Blade Runner-esque watches. As Felix put it, “Urwerk’s innovative timepiece [was] the result of nearly three years of development and a further two more years of testing. . . the end result went beyond our dreams.”

The UR-101 and the UR-102 were unconventional, yet the hemi-spherical aperture displays and wandering hours lacked the three-dimensional intrigue of the satellite display. But like the UR-101 and UR-102, most of the magic of the movement in the UR-103.01 remained hidden under the case of the watch. And would remain so until 2005, with the launch of the UR-103.03 and Urwerk’s collaboration with Harry Winston (read: Max Büsser) on the Opus 5. From 2003 – 2010, Urwerk would release the UR-103 in numerous variations – becoming a bestseller a bastion of avant-garde mechanical watchmaking.

As its 10th anniversary loomed, Urwerk found itself in an enviable position amongst other independents of the time – a field of watchmaking brimming with innovation, albeit not without risk. Unphased by the personal sacrifices required, Felix and Martin continued to explore, in quick succession, new and interesting ways of incorporating their already iconic satellite display into new watches.

Iterative Development Behind the UR-210

With the launch of the UR-210, Urwerk’s evolutionary process of development became increasingly apparent.

Reflecting Felix and Martin’s philosophy of watchmaking and design, Urwerk watches take inspiration not only from antiquarian horology but also from earlier watches made by the brand. Elements are refined gradually – it’s an iterative process of development more often seen in the tech and entrepreneurial circles.

An obvious example of this is the clear (no pun intended) evolutionary lineage from the expansive sapphire crystal ‘canopy’ found on the UR-103 Final Edition to the faceted one seen on the UR-210. Urwerk were incapable of such expansive custom-shaped sapphire dials earlier on, hence the slim aperture found on the UR-103.01. It’s important to note, though, that crystals like this ran against Felix’s minimalist tendencies at the time.

As for the UR-210’s case, it takes obvious cues from the oversized angular appearance of the UR-202/UR-203. Yet, unlike other Urwerk creations with organic form factors, the UR-210 is far more architectural or sculptural in its construction. “The extremely three-dimensional volume and crystal dome [of the UR-210] is pure Urwerk, all while offering highly legible graphics and indications.”, says Martin.

In addition to the aforementioned winding efficiency indicator, the turbine regulation system is part and parcel of the UR-210’s legacy. After some success with the user-adjustable control board found on the underside of the UR-103 (itself a nod to adjustability of the Breguet overcoil), Urwerk was able to refine and perfect the regulating automatic winding system on the UR-210. 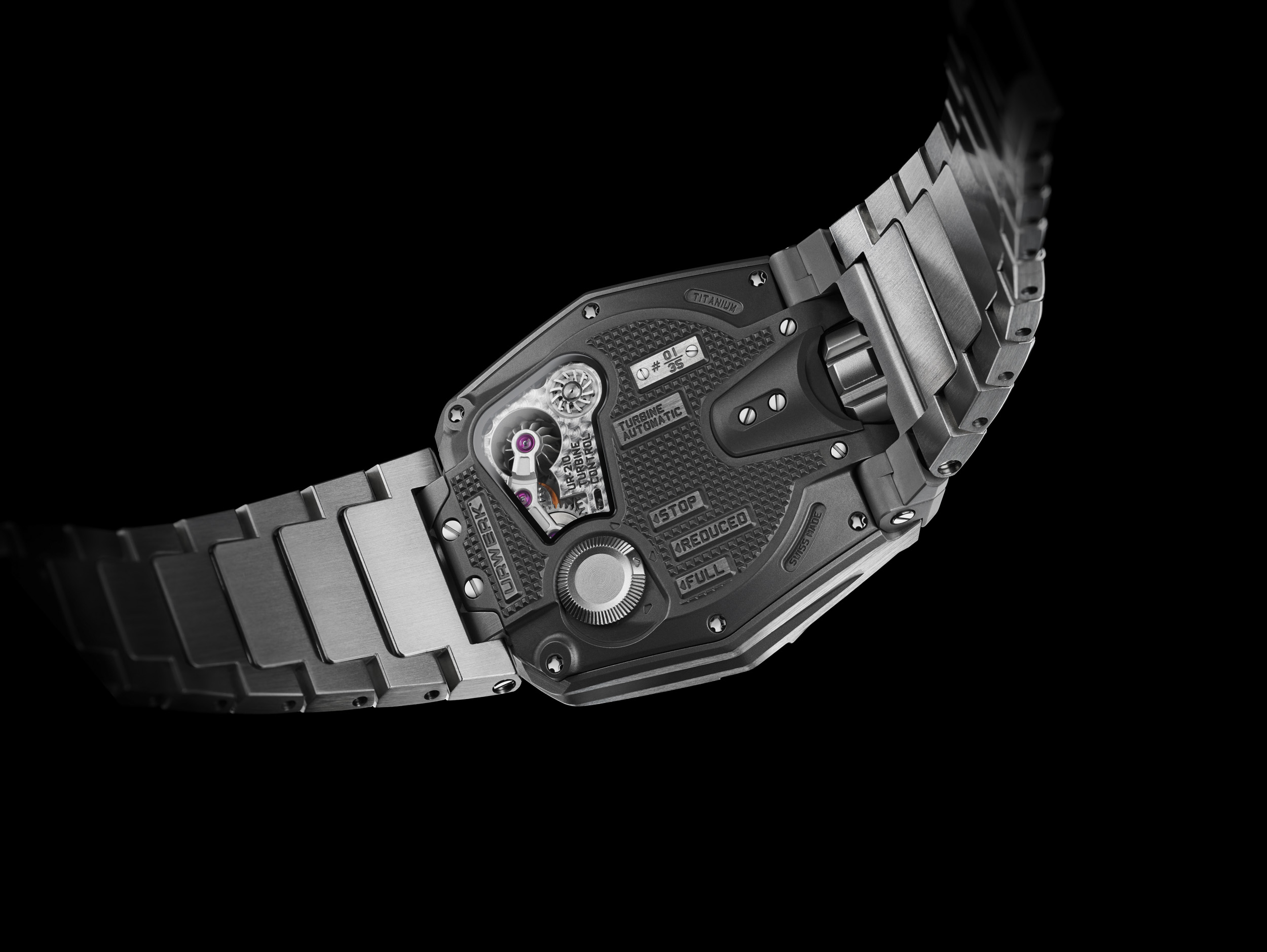 The goal, according to Felix, was to offer as much user control over the winding mode as possible having seen, firsthand, the detrimental effects of overwinding of the movement: “I started my career in the after-sales service of major watch brands and had to deal with recurring problems caused by the premature wear components, so we developed a system that minimized the problem. The turbines on the UR-210 are inspired by the regulators used in grande sonnerie movements.”

Armed with the knowledge of power reserve and winding efficiency, users are then able to intervene and adjust the efficiency selector to either:

Why then would Urwerk retire the UR-210? This all comes down to Felix and Martin’s artistic sensibility and respect for the tradition of making and collecting things of beauty. Rather than make the UR-210 ad infinitum, Urwerk chose to respect its impact, safeguard its legacy and move on. As Harvey Dent says in the Dark Knight (2008), “Would you rather die a hero or live long enough to see yourself become the villain?” 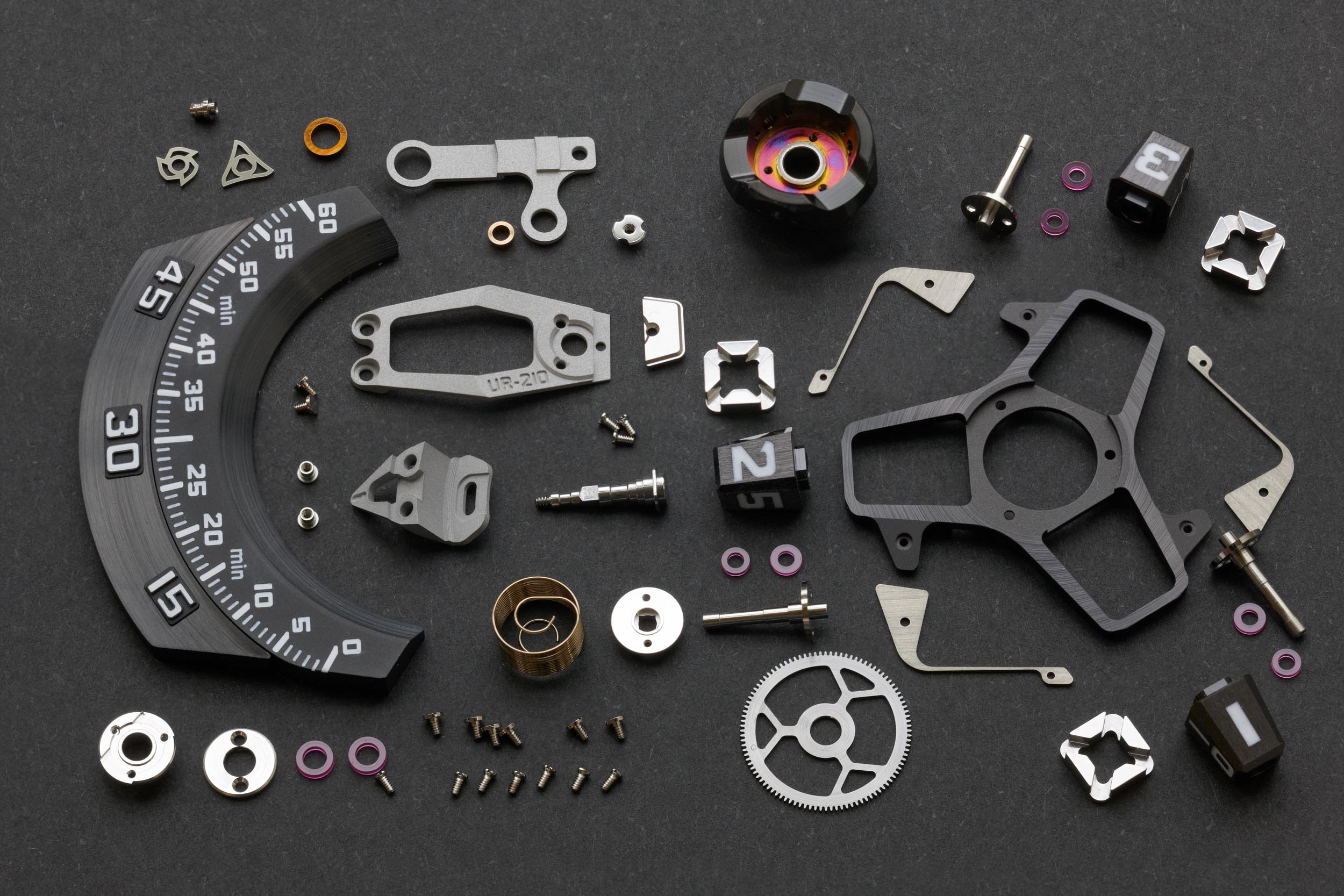 Unlike other watchmaking brands who introduce modern interpretations of old complications, Urwerk is more interested in reshaping our perception of time, and the ways in which we interact with it. Into its third decade (2017 –), we’ve seen this philosophy manifest itself in the introduction of the UR-111C (2018) and the UR-100 (2019).

Labelled the most wearable Urwerk to date, the UR-100 was no-less ambitious in its desire to explore the esoteric. Introducing two new astronomical complications: the 9 o’clock indication marks the 555.55 km travelled along the equator during 20 minutes of the earth’s rotation; the 3 o’clock indication marks the distance 35, 740 km – the distance travelled by the earth as it orbits around the sun in 20 minutes. Rather than rehash the trapezoidal satellite display, Urwerk further refined their circular satellite display – finding new ways to shave weight and height from the rotating satellites. Resulting in the UR-100 with its svelte-satellites and membrane-like domed sapphire crystal shrink-wrapping the movement underneath.

On the other hand, the teardrop-shaped UR-111C did away with the satellite display altogether, featuring an end-mounted drivers style arrangement with a retrograde linear minute display, an optical-fibre magnified seconds display and a roller crown and lever system.

The Maltese Falcon has grown up and left the nest. Since its inception in 2012, the UR-210 has bridged two crucial phases for Urwerk: a period whereby, after a rocky start Urwerk hit its stride and laid future foundations, and a later period characterised by mechanical and artistic innovation. The UR-210s commanding dial and imposing architecture enabled Urwerk to display the orbital satellite in all of its three-dimensional glory. 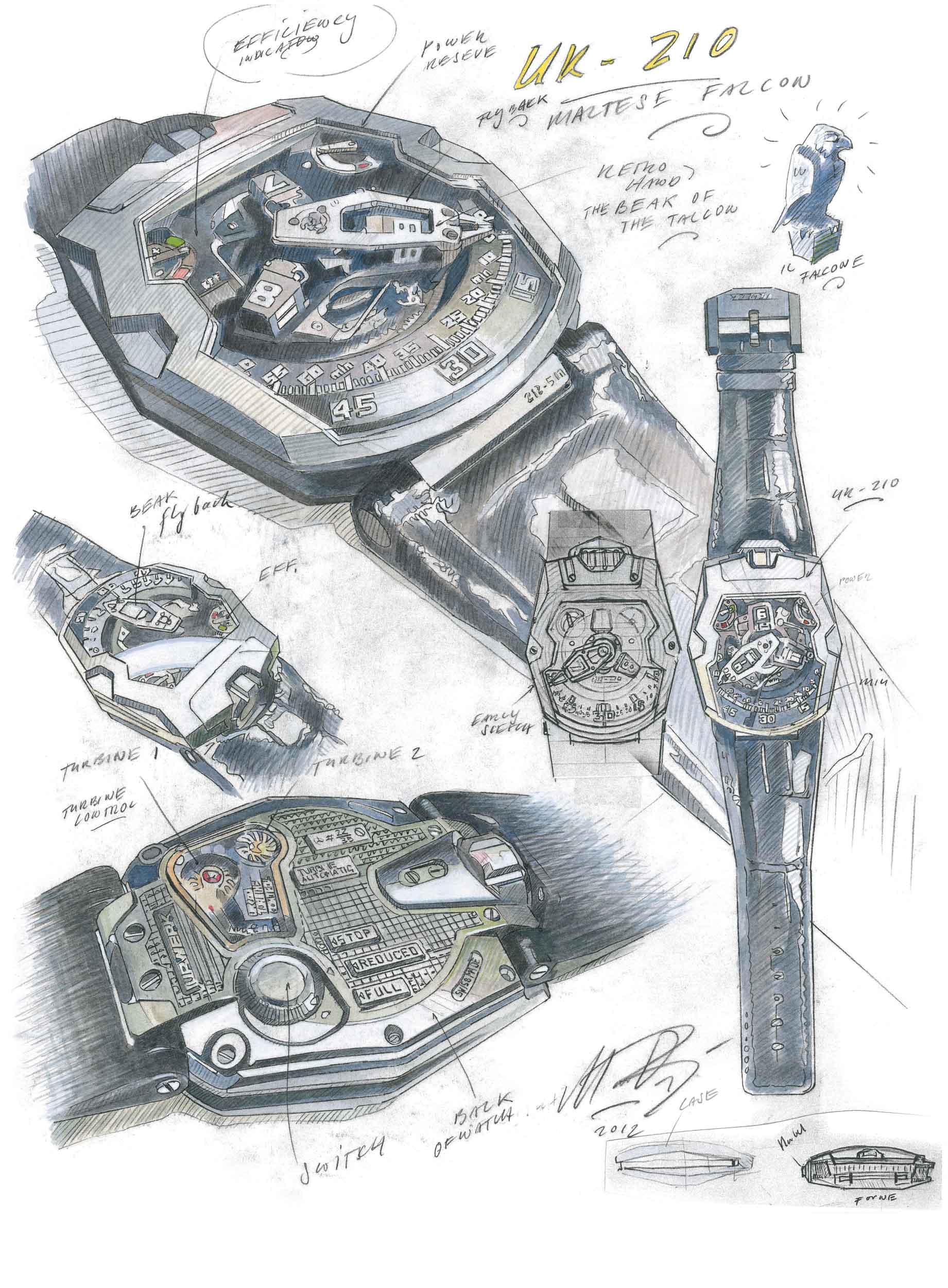 While it is sad to see a good thing come to an end, the UR-210’s legacy lives on in all subsequently released Urwerk watches, and the impact it continues to have on avant-garde mechanical watchmaking.

“Mr. Dufour was the first to see a working prototype of the UR-210 and, despite URWERK’s avant-garde style being the complete opposite of his, he liked it! Mr. Dufour’s approval comforted us in our approach. Since then, we have been fortunate to see the UR-210 on the wrist of celebrities, including Ralph Lauren and Michael Jordan, But the emotion of Mr. Dufour with our ‘UFO’ on his wrist remains one of my most beautiful memories.” Felix Baumgartner.

Urwerk Unveils the UR-100 GunMetal