Hublot In The World Of UEFA

Accustomed to breaking new ground and setting foot where no other brand has dared to go before, Hublot made history a decade ago by becoming the first ever luxury watch brand to enter into the world of football. And just a year into their announcement as Official partner of the Swiss Football team in 2006, Hublot was anxious to explore this whole new universe. A pioneering move for a luxury brand in the world of football!

22nd February 2007 – A DATE TO REMEMBER
With his signature boisterous bravura, Hublot’s Chairman, Mr Jean-Claude Biver announced Hublot the Official Timekeeper for UEFA EURO 2008™ in the presence of UEFA and International press on February 22nd, 2007.

This date will always be chronicled as the day Hublot authenticated their commitment as the first luxury brand to enter the world of football. The announcement proliferated into a significant 360-degree partnership, with Hublot not just being reflected on the A-boards of the soccer pitch as well as timekeeping scoreboards of the match but taking their affiliation to another level by creating a limited edition timepiece specially dedicated to this prolific European cup watched by nations from all walks of life. 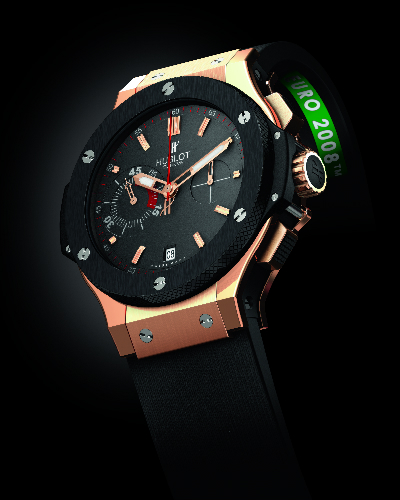 The Big Bang Euro 2008 timepiece created specially to commemorate Hublot’s commitment to the world of soccer.

CHAMPIONING THE ART OF FUSION
Their campaign within the scope of UEFA EURO 2008TM was a runaway success. This alliance truly exemplified the Art of Fusion philosophy that Hublot premises itself on.

By bridging the world of luxury watchmaking with a sporting phenomenon that is so widely loved and adored by the world, Hublot indeed has fusion running through its DNA. Notwithstanding their stance as the first luxury watch brand to be in the world of football, they go above and beyond by developing timepieces that celebrate football as a sport.

Starting out as a trailblazer in 2006, Hublot has continued to develop its commitment to the sport: Renewing their status as the Official Watch of the UEFA EURO 2012™ and associating the brand with esteemed soccer clubs such as Juventus of Turin, Bayern Munich, Ajax Amsterdam… These privileged relations have given rise to a host of synergies and to a high level of creativity, providing Hublot with global visibility.

The two King Power UEFA EURO 2012™ watches, one made from King Gold and ceramic and mainly featuring the blue of the Ukrainian flag, and the other in titanium and ceramic featuring the red of the Polish flag includes a 45-minute counter at 9 o’clock amongst its special features, indicating the duration of half a football match as a nod to the footballing world.

The official UEFA logo is featured on the watch’s sapphire crystal case-back, surrounded by a graphic representation of a football, inspired by the competition’s official logo.

HUBLOT LOVES FOOTBALL 2016: A DECADE OF COMMITMENT TO THIS BEAUTIFUL SPORT
Fast forward to present day, Hublot proudly declares its love of the beautiful game. With its reputation as the first luxury brand to invest in the sport, Hublot has maintained its status as games master for ten years.

For ten years, Hublot has led its established commitment to football year on year. Whether official ambassadors, or friends of the brand, they are all part of the “Hublot Loves Football” world. In 2016, for its third participation in the UEFA EURO, the brand has created a series of one-off, powerful, authentic portraits.

Their names are Nicola Rizzoli, Roy Hodgson, Fernando Hierro, Xherdan Shaqiri, Karl-Heinz Rummenige, Luis Figo, Rio Ferdinand, José Mourinho, Lukas Podolski, Michel Pont and David Trezeguet. They are emblematic figures of football. Referees, players and coaches that make the world move to the rhythm of a ball. Hublot remembers their achievements, the goals they scored, victories from penalty shoot-outs, their demonstrations and their emotional outpourings. The power of victory is boundless, it goes through the screen to fill us with the same rejoicing that sweeps across stadiums during competitions. A force that can unite thousands of people around the world with the same feeling. 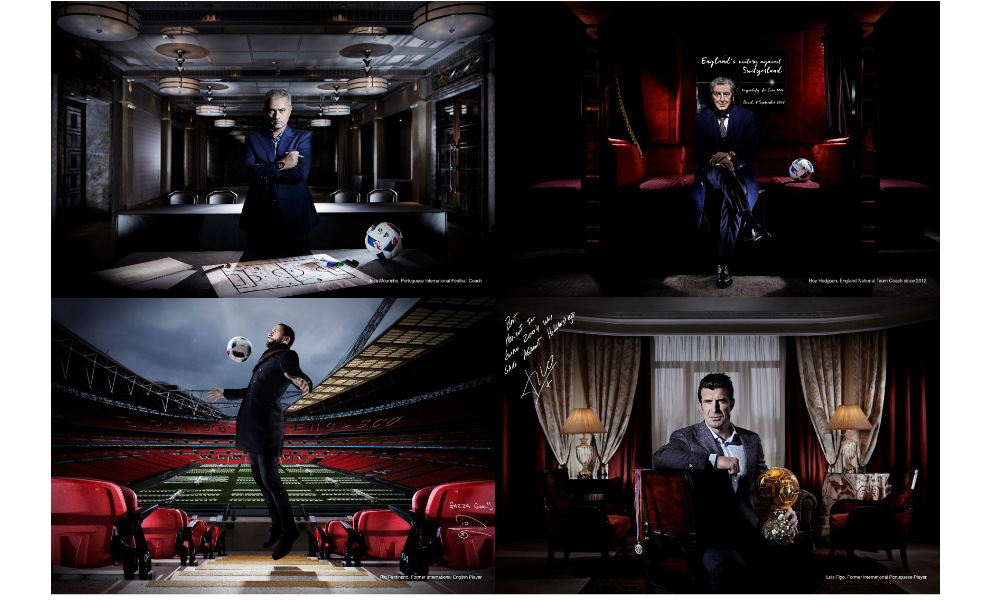 Hublot Loves Football 2016: What is your Euro Moment? 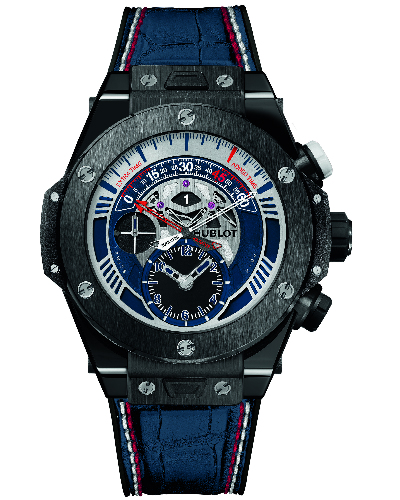 On the occasion of its 3rd EURO participation, Hublot introduces the Official Watch of UEFA EURO 2016™ which will kick off in France from 10 June to 10 July 2016.

Designed with the football world in mind, the Big Bang Unico Retrograde Chronograph proudly wears the colours of France, the organising country of the 15th edition of the EURO Cup. Its 45mm case in black ceramic is fitted with a “One click” interchangeable strap system in blue alligator sewn onto rubber and overstitched with white and red seams. A bi-retrograde module with patented automatic winding is fitted to the UNICO manufacture calibre, enabling it to time a football match.

The now famous Hublot panels will also be there on the pitches. They are used by the fourth official to indicate extra time and player changes. They are now an essential feature of major competitions after their new design introduced for the first time at the UEFA EURO 2008TM. They have a distinctive look and have a bespoke design following the style of each of the competitions.

10 years remembered and just 3 more days to yet another incredible season… may the best team win!

Stay tuned for more Hublot and football related stories in the course of the next few weeks for the Euro Cup 2016.

The Hour Glass is the exclusive retailer of Hublot in Southeast Asia.