MB&F once again turns to the world of automotive racing for inspiration with the fresh off the press Horological Machine No. 8 “Can-Am”.

The streamlined form of the HM8 is inspired by the Canadian-American Challenge Cup, better known as Can-Am. A sports car race that ran annually from 1966 to 1987, the Can-Am series counted the world’s best drivers of the era amongst its participants, including Bruce McLaren, Phil Hill and Mario Andretti.

They piloted avant-garde automobiles equipped with enormously powerful, large capacity engines and cutting edge technologies of the day, including turbocharging and lightweight titanium alloys, resulting in cars that were as quick as contemporary Formula One cars. One extreme example being the Porsche 917 “Turbopanzer” of 1972, which boasted 1100 horsepower, winning six of eight races in the 1973 series.

Fifty years on from the first Can-Am race, MB&F’s latest wristwatch sits flat and low on the wrist, mimicking the profile of the Can-Am cars. And the HM8 is literally a driver’s watch, designed to be legible even with the hands on a steering wheel. 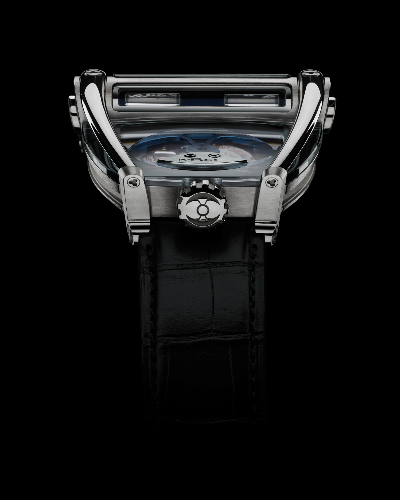 Introduced after the HM6 with the seventh machine still in the works, the HM8 has a jumping hours display, while the minutes are on a sweeping disc that turns continuously. Both discs are flat, mounted on the same plane as the movement, but translated into a vertical time display with a pair of sapphire prisms that reflect the digits, a construction also found on the preceding HMX 10th anniversary wristwatch.

Twin curved struts on each flank of the case are inspired by roll bars of the Can-Am cars. Made of titanium, the rolls bars polished by hand to a mirror finish. The bars frame an expansive sapphire crystal – so large it’s almost as large as the case – that reveals the self-winding movement fitted with a battle axe-shaped rotor, a signature feature of MB&F’s watches. 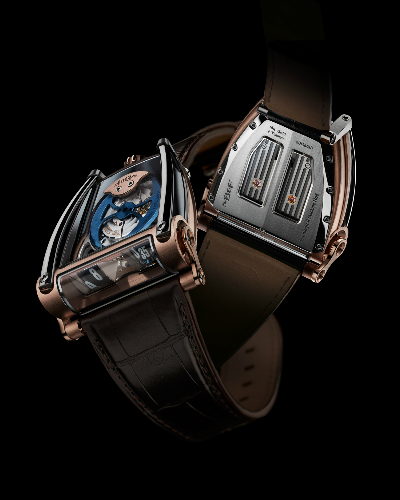 The base movement in the HM8 is manufactured by Girard-Perregaux while MB&F’s own watchmakers constructed the time display mechanism. Unlike most jumping hour mechanisms that only go forward, the HM8 movement has been designed for convenience, so it can be set forwards and backwards without damaging the movement.

The HM8 is available in 18k white gold or red gold, each with grade 5 titanium accents.

The Hour Glass is the exclusive retailer of MB&F.