Each year in January, over two dozen top luxury watch makers converge in Geneva at the Salon International de la Haute Horlogerie, or SIHH. After having just completed the 2018 installment of the trade fair, I’ve put together a list of some of best new watches for serious timepiece collectors.

Piaget Altiplano Ultimate Concept Watch
At just 2mm thick (case and movement), Piaget once again establishes itself as the “slim” brand to beat with the new Altiplano Ultimate. Literally wafer-thin on the wrist, this spectacular exercise in minute tolerances and tight assembly is both intellectually and visually stunning. The watch looks so thin, it is hard to imagine how it work, though Piaget did reveal some secrets like the use of ball bearings and a floating barrel. Collectors of ultra-thin watches should now have a new grail piece to seek out.

Girard-Perregaux Minute Repeater Tri-Axial Tourbillon
While it won’t win any awards for legibility, the technical accomplishment in the latest mega-complication from Girard-Perregaux is undeniably fantastic. With an almost totally exposed movement see through the dial of the large case, Girard-Perregaux managed to include both a minute repeater and extremely challenging triple axis tourbillon in one timepiece. It’s not really meant to be worn on a regular basis, though if you have the courage to do so, you’ll have enormous street cred with other timepiece enthusiasts.

Richard Mille RM53-01 Pablo Mac Donough
Designed to withstand the abuse a timepiece might suffer while being worn during a match of polo, the real innovations of the Richard Mille RM53-01 are in the context of durability, that is for a product that arguably has no reason to be subjected to the dangers of polo playing. If you must, however, play a ballgame on horseback with a $900,000 watch on the wrist, you’ll no doubt appreciate Richard Mille’s improvement of its metal cable-suspension shock absorption system for the movement, as well as the novel use of a crystal constructed like bulletproof glass, with a layer of polyvinyl in-between two sheets of sapphire crystal, ensuring that even if the top crystal cracks, it does not shatter.

IWC Tribute to Pallweber 150th Anniversary Pocket watch
While introducing a new jumping hour and minute complication in a trio of limited edition wristwatches, IWC also released a limited edition pocket watch with the same new movement and digital display. IWC was inspired by the historic Pallweber pocket watch with the same complication – so in a very real way the pocket watch is a contemporary extension of the original models from over a century ago. The pocket watch has a solid gold case decorated with an attractive guilloche engraving – as well as the compelling and legible Pallweber display on a lacquered dial that resembles enamel. 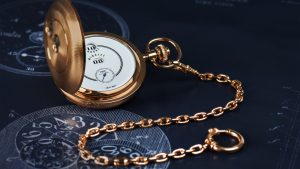 Vacheron Constantin FiftySix Complete Calendar
Geneva-based Vacheron Constantin debuted an entirely new collection of watches known as the FiftySix, featuring a case inspired by a watch from 1956. The highlight of the range is the the FiftySix Complete Calendar that includes a moon phase as well as an attractive, symmetrical display for the calendar, much like a traditional triple calendar. In many ways the product sacrifices novelty for warm familiarity – though it results in an easy choice for collectors who want a modestly complicated watch from a brand known for its strong finishing and effectively conservative case and dial designs.

Panerai L’Astromo Luminor 1950 Tourbillon Moon Phase Equation Of Time GMT PAM00920
Building on a movement originally released a few years ago, Panerai has a new flagship product to be proud of. Combining a horizontally mounted tourbillon with an attractively skeletonized dial, this “mega” Luminor adds a new moon phase display on the rear in place of the outgoing model’s star chart. As one of the most complicated Panerai watches available, but with the case option of lightweight titanium, that makes the L’Astromo nevertheless comfortable to wear as well as read.

Audemars Piguet Royal Oak RD#2 Perpetual Calendar
At just 6.3mm thick, Audemars Piguet says that the Royal Oak RD#2 Perpetual Calendar is the thinnest perpetual calendar on the market today. The movement is just under 3mm thick, an impressive mix of features and extreme space-saving engineering, despite having over 250 parts needed to offer the full range of features in a full spec perpetual calendar. Collectors are going to love it because it combines looks and watchmaking: the world-class good looks and popularity of the iconic Royal Oak, with an enthusiast-approved, ultra-thin movement that is sure to delight when on the wrist.

A. Lange & Söhne Triple Split
What’s better than a Double Split watch? The Triple Split, of course. The idea here was to increase the period of time the split second chronograph could measure – which is now up to 12 hours (and was just 30 minutes in the Double Split). Beyond its extravagant utility, the Triple Split movement is beautifully designed, captivating to see and operate. And it also remarkable engineering, the watch is only 0.3mm thicker than the Double Split. It will not be a volume leader for the brand – just 100 will be made in white gold – but collectors of the high-end German watchmaker will be talking about the Triple Split for years to come.

Parmigiani Kalpagraphe Chronometre
With an imposing case and desirable in-house integrated chronograph movement, the redesigned Kalpagraphe Chronometre is not just notably technically, but also sheer good value for the sheer amount of gold in the case. At over 40mm wide and 48mm tall, along with large, sculpted lugs, this Kalpa wristwatch is best suited to those with larger wrists wishing to make the type of statement a round watch simply cannot. The lavishly decorated and high-performance 5Hz automatic movement is what pushes its appeal over the edge into the “have to have” zone.

Ulysse Nardin Freak Vision
The famed Freak from Ulysse Nardin shows no signs of fatigue in its 17th year, and it has just been rejuvenated. The newest Freak radically redesigns the case and incorporates a brand new movement with one of the cleverest automatic winding systems in recent history. The Grinder system uses silicon parts to create a vastly superior – with higher efficiency and smaller size – winding mechanism. Add to that modern looks and a dedication to advancement of the movement – with a new escapement and balance – make the first ever automatic Freak one of the best ever in the distinctive family of freakish watches.