Hublot unveils its team of international football stars as part of its 2014 FIFA World Cup campaign.

Pelé, José Mourinho, Turin’s Juventus, Paris Saint-Germain, Bayern Munich, Luiz Felipe Scolari, Falcao, Roy Hodgson, Xherdan Shaqiri, Amsterdam’s Ajax …. all the giants of football.  All the big names, living legends of football who have chosen Hublot, not only to be ambassadors and friends of the brand throughout the world, but also to work together on a variety of projects, some in aid of charity and others. 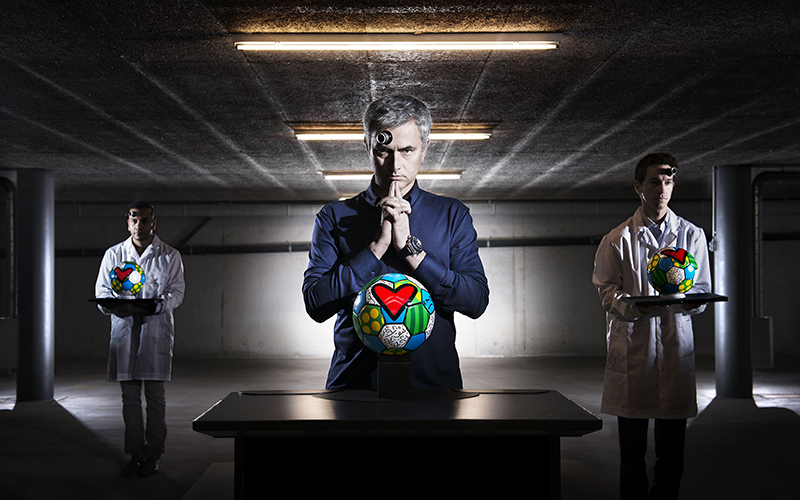 This year, to mark the forthcoming FIFA World Cup, for which Hublot is the Official Timekeeper and Official Watch, the Swiss watch brand invites us to discover them in a new, unique and different way.

The result is a series of striking and exceptional portraits that have never been seen before. Each photo portrays the unique personality of the person or group.  All of the images tell a story by capturing moments of closeness between the ambassador and the Hublot team: Pelé, the King of Football, was photographed on a stair landing in a fashionable Ipanema hotel in Rio, revealing his kindness and attesting to a strength and fitness extraordinary for his age.  José Mourinho, also known as The Special One, was photographed surrounded by clocks in a shadowy basement during a visit to the Hublot manufacture in Switzerland, while the Juventus players were beautifully captured in high spirits the day after their match against Fiorentina.  The Paris Saint-Germain team are portrayed on the turf at their training centre, as the sun momentarily breaks through the clouds during a rainy afternoon just long enough to capture the photo.

Each photo bears Hublot’s symbol for the FIFA World Cup: a football painted and decorated by the renowned artist Romero Britto, a Brazilian painter and sculptor whose work combines elements of Pop Art, Cubism and graffiti.  This ball links all those involved in the project with the official watches of the FIFA World Cup, which are presented in cases in the shape of the football decorated by Britto.

The offbeat yet respectful photos were taken by Fred Merz, a Swiss freelance photographer who lives in Geneva. With numerous photographic exhibitions to his name, his portraits and journalistic photos, whose lighting and approach are instantly recognisable, are used by some of the world’s biggest media companies.  Renowned and much in demand for his portraiture talents, Fred Merz casts an aesthetically astute eye over the world – a world he illuminates in such a way as to produce almost cinematic compositions featuring exquisitely constructed images.

The “Hublot Loves Football” Campaign World Tour has made its American stop in Miami as well as Mexico with Brand Ambassador Pelé as of late and will continue to establish its presence as the Official Timekeeper and Official Watch of the FIFA World Cup 2014.

The occasion took place at the Hotel Fontana Park, surrounded by VIPs and Hublot clients where he has been honoured with an iconic Big Bang Unico Special Unique Piece, giving the Swiss luxury watch manufacture with CEO Ricardo Guadalupe, the opportunity to support the Portuguese National colours.

The award was given by Vincent Vuillaume, Regional Director of Hublot: “It is an honour to have another great coach in our dream team for the World Cup 2014.” Paulo Bento added, “I´m thrilled to become part of the Hublot family because it´s a great company and also because I will share this honour with other Portuguese coaches like Mourinho and with the amazing Luis Felipe Scolari!”

Paulo Bento is one of the big names in the upcoming Football World Cup. He is the Coach of the Portuguese National football team, doing an impressive job with the squad since 2010. He joins the Hublot prestigious football family of ambassadors and friends, including Pelé, José Mourinho, Luiz Felipe Scolari, Roy Hodgson, to name just a few.

Born in Lisbon, he started his career playing professionally for C.F. Estrela da Amadora, Vitória de Guimarães and S.L. Benfica, and played for four years in Real Oviedo, before moving to Sporting Clube de Portugal, where he finished his career as a player. He was part of the star-studded team that achieved the double in 2002 under the direction of Laszlo Bölöni, contributing with 31 games and one goal in the league and playing alongside Mário Jardel and João Vieira Pinto among others. Bento gained 35 caps for the Portuguese national team, his first game coming on 15 January 1992 and his last on 14 June 2002 in the FIFA World Cup. After his retirement, in 2004 he became the Sporting’s youth team coach and was promoted in 2005 to first-team manager. Bento managed an impressive turnaround for Sporting with a series of ten consecutive wins that placed Sporting within touching distance of leaders and eventual league champions F.C. He becomes the second-most successful manager in the history of the club in terms of trophies won, only surpassed by the legendary Josef Szabo.  In 2010, he became the Coach of the National football team.

About “Hublot Loves Football campaign” : Pelé, José Mourinho, Luiz Felipe Scolari, Paris Saint-Germain, Bayern Munich, Paris Saint-Germain, Falcao, Roy Hodgson…living legends of football who have chosen Hublot, not only to be ambassadors and friends of the brand, but also to work together on a variety of projects. To mark the forthcoming FIFA World Cup™, for which Hublot is the Official Timekeeper and Official Watch, the Swiss watch brand invites us to discover them in a new, and different way. The result is 12 exceptional portraits which reveal them as they’ve never been seen before. All of the images tell a story by capturing moments of closeness between the ambassador and the Hublot team. Each photo bears Hublot’s symbol for the FIFA World Cup: a ball painted and decorated by the renowned artist Romero Britto, This ball links all those involved in the project with the watches.

Hublot is Official Timekeeper and Official Watch of the FIFA World Cup, and will be notably visible on the referee’s board throughout all the matches in the competition.

The Hour Glass is the proud exclusive retailer of Hublot in South East Asia.