Meet and Greet With The Founder of De Bethune in Australia

For the first time ever in Australia, The Hour Glass Australia will be hosting a “Meet and Greet” session with David Zanetta, the President and co-founder behind the exceptional De Bethune timepieces. Take this opportunity to get acquainted and speak with David Zanetta on his first visit to Sydney. 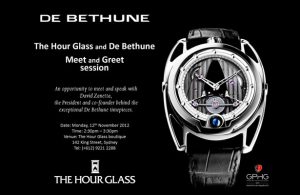 David Zanetta, the President and co-founder of De Bethune is a recognised authority on watches and their history. He also has an affinity for paintings, sciences, and arts which led to his passion to create beautiful micro-mechanical objects. Along with Denis Flageollet, David had the idea to create a company that would design and create watches of the very highest quality, watches that the general watchmaking industry had long since ceased to produce– and De Bethune was born.

The Manufacture Horlogère De Bethune was founded in 2002, based on a resolutely avant-garde vision of traditional watchmaking. The pure contemporary aesthetic of De Bethune mechanical timepieces combines cutting-edge technological innovations with the horological know-how of the Manufacture which is inspired and nurtured by several centuries of history.

In November 2011, at the Geneva Watchmaking Grand Prix prize-giving ceremony, the DB28 model (as seen above) was awarded the Aiguille d’Or (Golden Hand), the supreme distinction of these prestigious awards.

Come join us at the Sydney boutique, where you can get up close and personal with the man who is the artisan of De Bethune.