Industrial designer Marc Newson is, arguably, one of Australia’s most acclaimed exports. Known for his effortless sense of design, Newson has created products across several industries and collaborated with some of the biggest multinational brands: think Apple, Georg Jensen, Jaeger-LeCoultre, Louis Vuitton, Smeg and Nike among many others. His work to date is nothing if not diverse, covering aircraft, interiors, fashion and footwear, glassware, perfume bottles and timepieces.

But while Newson’s back catalogue encompasses an eclectic range of products, there’s a common thread running through each project: a style marked by smooth lines, a distinct lack of crisp angles, curious shapes, and a retro yet Modernist sensibility. And so, it only made sense that Newson should be asked to design The Hour Glass’s tribute to its 40th anniversary: the Klepsydra ‘water clock’. In honour of the partnership, we’re exploring Newson’s illustrious career, from his beginnings in Sydney, Australia, to becoming one of the world’s most influential living designers.

Newson was born in Sydney in 1963, and a lot of his childhood was spent traversing Europe and Asia. In 1986, Newson graduated from Sydney College of the Arts after completing a degree that combined jewellery and sculpture. Around this time, Newson was awarded an Australian Crafts Council grant, which allowed him to stage his first solo exhibition – he was only 23. It was in this exhibition that one of Newson’s most famous designs made its debut. The ‘Lockheed Lounge’, with its curvaceous form and unusual aluminium fabrication, has since become an emblem of Newson’s extensive career and one of the design world’s preeminent contributions. It’s broken several world record auction prices for work by a living designer; the highest amount it has attracted so far is over US$3 million in April 2015.

Following on from his itinerant childhood, Newson moved to Japan in 1987 and then to Europe in 1991. During his years spent in Japan, he worked for Idée, an interior design and furniture brand that originated in Tokyo. Notable designs that came out of his tenure include the ‘Super Guppy Lamp’ and the ‘Embryo Chair’, another of Newson’s most well-known pieces. Upon his move to Europe, he established himself in Paris, specifically in the French garment district. He took up a post designing household products for Philippe Starck, before moving on to Finnish design brand Iittala, and then Alessi, Magis and Flos in Italy. He also set up his own designer watch company, Ikepod, with Swiss designer Oliver Ike. Eventually, in 1997, Newson moved to London, where he’s currently based.

Over the years, Newson has built an esteemed reputation as a multidisciplinary designer, developing numerous consumer goods, winning several awards, and having many of his pieces showcased in some of the biggest museums in the world (MoMa, the Smithsonian and Centre Pompidou are just a few currently housing his works). Newson conceptualised cars and bicycles for Ford and Biomega respectively and undertook various design projects for independent clients, including a privately owned jet. Between 2008 and 2016, Newson designed three reinterpretations of Jaeger-LeCoultre’s iconic Atmos clock. Adopting hand-blown glass casings that make the clocks appear to float, each iteration is extraordinarily striking.

For many years, Newson worked for Australian airline Qantas, where he designed both aircraft and a luxe first class lounge in Sydney. He also produced sneakers for Nike; candles, luggage and fragrance bottles for Louis Vuitton; Champagne containers for Dom Perignon; kitchenware for Tefal; and much more. Newson then joined Apple in 2014 to work on the designs for several of the tech company’s products. Since departing Apple just this year, Newson and close friend and former chief design officer for Apple, Jony Ive, have launched their own design agency, LoveFrom.

Newson’s first collaboration with The Hour Glass was in 2010, when he designed a series of limited edition hourglasses to mark the company’s 30th year in business. The collection of only 30 hourglasses was nothing short of impressive; blown from a single piece of glass, each one contained millions of tiny gold-plated nanospheres that resembled fine gold dust. The hourglass has since become another of Newson’s iconic creations, instantly recognisable for its svelte form.

Now, in 2019, The Hour Glass celebrates another decade. For its 40th anniversary, Newson has designed a striking ‘water clock’. Named ‘Klepsydra’ (a term used by the Ancient Greeks for their water clocks), the timepiece is an incredible feat of engineering. It uses the same nanoballs as the 2010 hourglass to redefine the principles of a traditional water clock: put simply, the flow of the 2.8 million nanoballs is meticulously controlled to power the clock’s mechanism. The nanoballs are housed in a mouthblown glass casing with aluminium and stainless steel accents that ring of Newson’s retro-Modernist approach to design. In essence, the Klepsydra’s interface looks simple, but the in-house movement is beautifully complex – a synopsis that could very accurately describe the rest of Newson’s impressive archive. 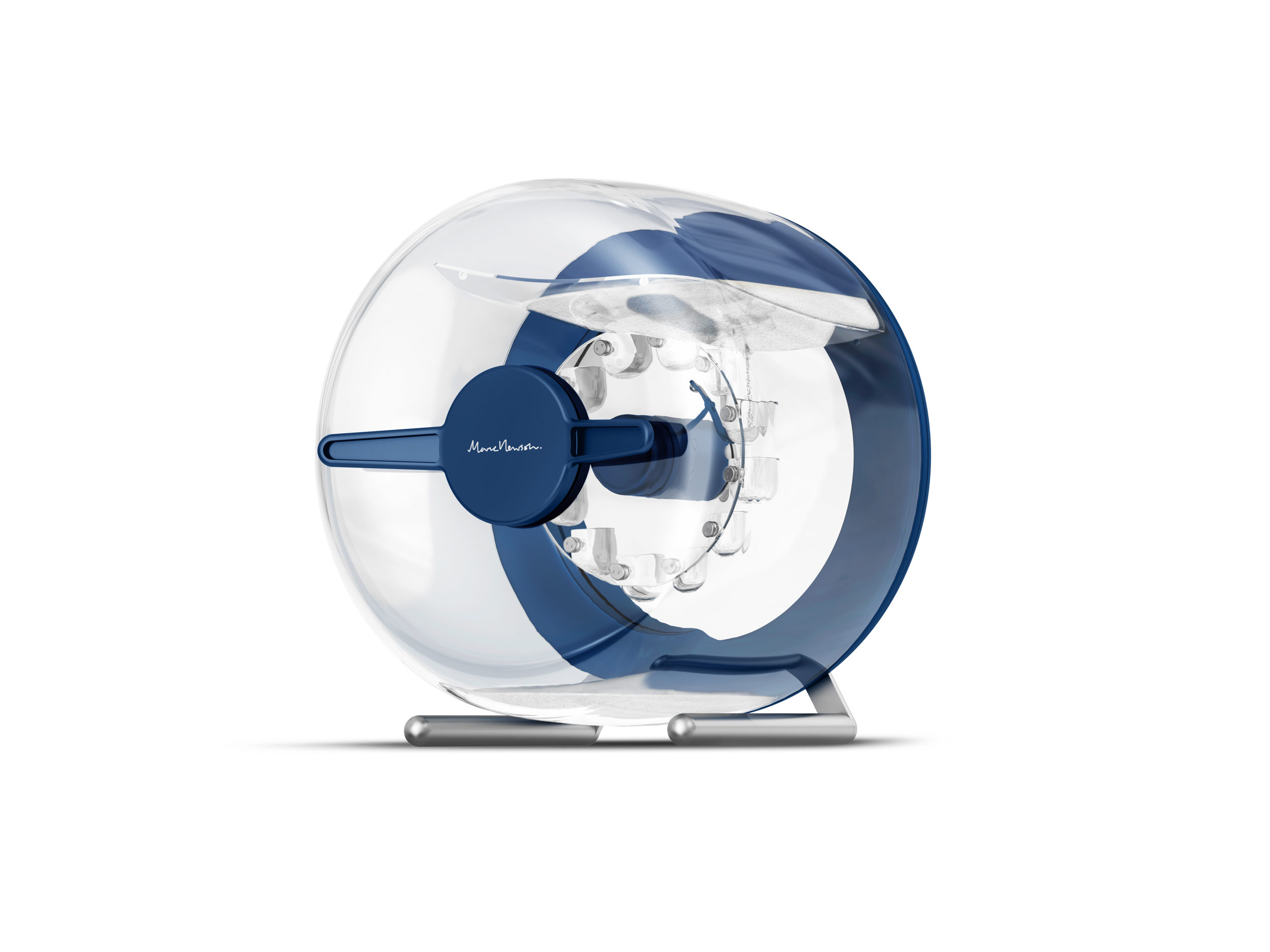