Baselworld 2019: Tudor unveils the Black Bay P01 (Prototype 1, Ref. 70150). Featuring a 42 mm satin-finished steel case (2 mm bigger than the original prototype from 50 years ago) with a 60-notch, 12-hour graduated steel bi-directional rotating bezel (with a stop system built into the mobile end-link at 12 o’clock), a steel screw-down winding crown at the 4 o’clock position and a domed black dial and sapphire crystal. It also has a date window at 3 o’clock, is waterproof to 200 metres (660 ft) and includes Tudor’s first hybrid leather and rubber strap (with folding clasp and safety clutch, all satin-finished). The Black Bay P01 houses the self-winding mechanical movement, Manufacture Calibre MT5612 (COSC). Power reserve of 70 hours. Priced at CHF 3,750 This week, many were expecting Tudor to release a followup to the popular Black Bay Fifty-Eight, launched at Baselworld 2018. However, Tudor, in true “Born to Dare” fashion pulled the unexpected and released a watch none of us saw coming.

The Black Bay P01 is based on a prototype developed and proposed to the US Navy under the code name “Commando”. It never actually entered production though, with the US Navy preferring to take on Reference. 7016 (itself replacing Reference. 7928 in the Tudor catalogue). Tudor ‘s Oyster Prince Submariner, Reference. 7016, was instantly recognisable due to its large square-shaped markers, “snowflake hands” and shield logo found on the dial. Gone was the rose logo, in its place Tudor adopted the shield logo as it better represented the rugged reliability of their watches.

As for project “Commando” though, it remained locked away in the archives for fifty years. 50 Years In the Making

Having been in an archival slumber for the latter half of the 20th-century, you can’t exactly expect the watch (the P01 that is) to explode out of the gates. But then again we’re talking about a Black Bay.At the end of the fair, the P01 was one of the most talked about watches.

Online, however, the reaction has been mixed. There’s nothing wrong with forming an opinion before trying the watch on, seeing it in the metal, giving it wrist time; but it’s important to take these initial (online) impressions with a grain of salt. Because at the end of the day, watches are to be worn. It’s important to see the watch in person, especially so when dealing with more daring designs. The P01 takes time to appreciate, its unique case construction gradually reveals its utilitarian charm.

Up until now, all of the watches in the Black Bay collection have featured crowns at 3 o’clock and have come on either a bracelet, a leather strap or a fabric strap.  The Black Bay P01, on the other hand, has a 4 o’clock crown and is the Tudor watch to come with a hybrid strap. Steel end links connect the satin-finished 42 mm case with a hybrid leather and rubber strap (leather with a rubber underside). Face on, thanks to the articulating end-links, it appears that the P01 is on a steel bracelet. Unlike its source material, the P01 comes on a matt brown leather strap with beige stitching and a rubber underside.

The screw-down crown at 4 o’clock is flanked by rather aggressive crown guards. Jutting out from the side, their angular appearance effectively communicates the utilitarian origins of the P01 as a watch designed to do a job and do it well. Without succumbing to the predictably harsh surroundings the “Commando” would have been subjected to. 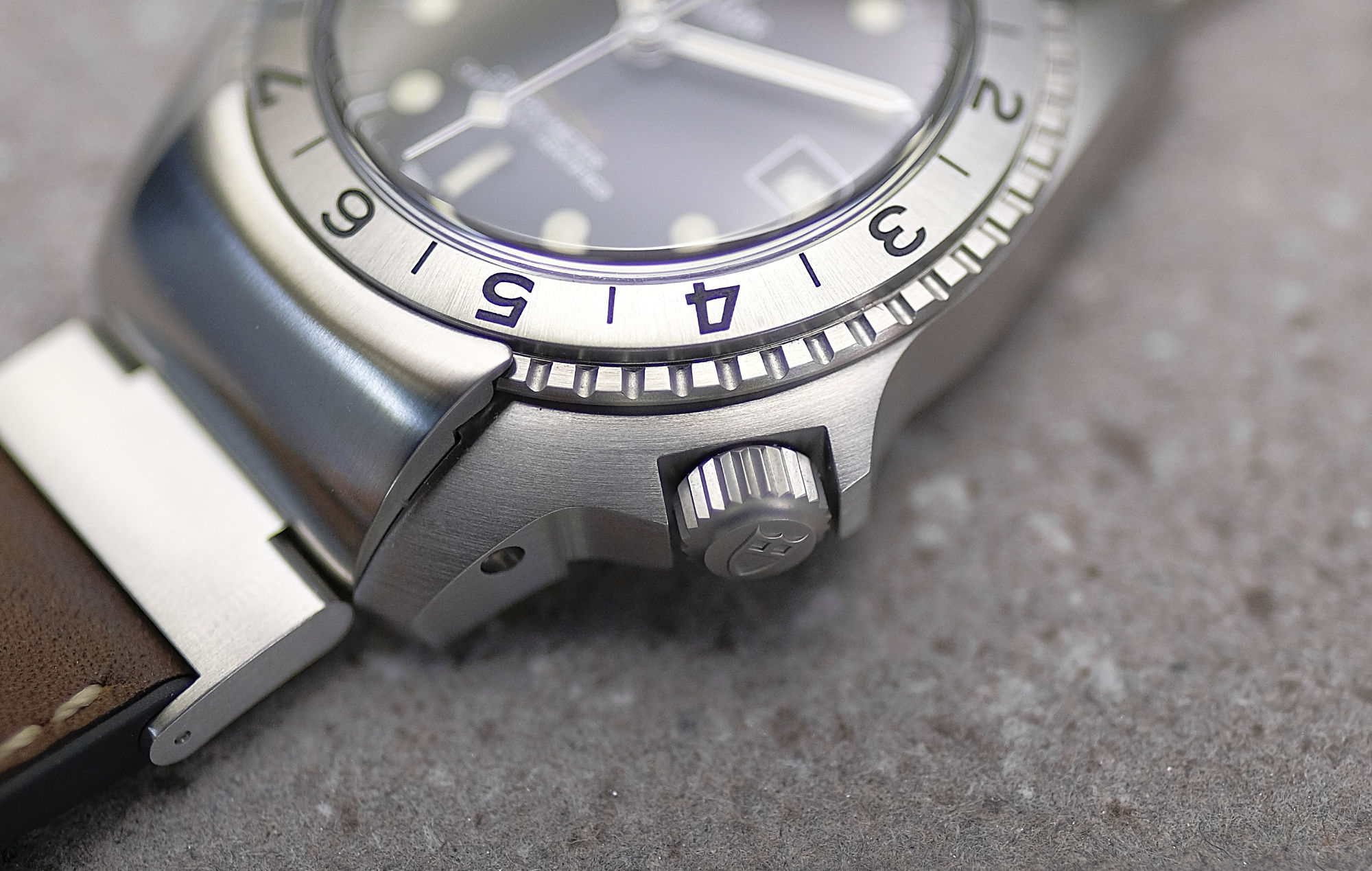 Unlike other Black Bays, the P01 has printed lume hour markers in place of applied markers. Combined with the light distorting effects around the edges of the domed crystal, the P01 gives off just enough of a vintage vibe without feeling like it’s stuck in the past. I particularly like the framed date window,  another first in the Black Bay lineup. It gels well with the chunky snowflake hands and rectangular hour markers at 6 and 9 o’clock. Calibre MT5612 is precise – having been officially certified as a Swiss Chronometer by the Swiss Official Chronometer Testing Institute (COSC). Powering a central, minute and second hands, it also boats stop seconds for precise time setting and instantaneous date at 3 o’clock. What this means is that at midnight the date rapidly flips over as opposed to languidly rolling by. And without a non-correction range, the wearer is able to activate a quick date change at any time of the day without risk of breaking components involved in date change (it’s generally advocated to avoid date change around midnight, also known as the “danger zone”). Add a variable inertia balance, non-magnetic silicon balance spring and 70 hours of power reserve and you’ve got an impressively spec’d out movement for a watch costing under CHF 4000. Unexpected? Yes. Quirky? For sure. The Black Bay P01 draws heavily from its source material whilst remaining aesthetically rooted in the design conventions set forth by the Black Bay collection, notably the mix of chunky and circular hour markers, domed sapphire and snowflake hands. Its unconventional design – like any disruptive watch – takes time to appreciate.

The level of engineering, watchmaking tech and history relative to the price is astounding. It’s a welcome addition to an incredibly diverse collection of watches ranging from chronographs to bronze watches and is proof, yet again, that Tudor is indeed “Born to Dare”. 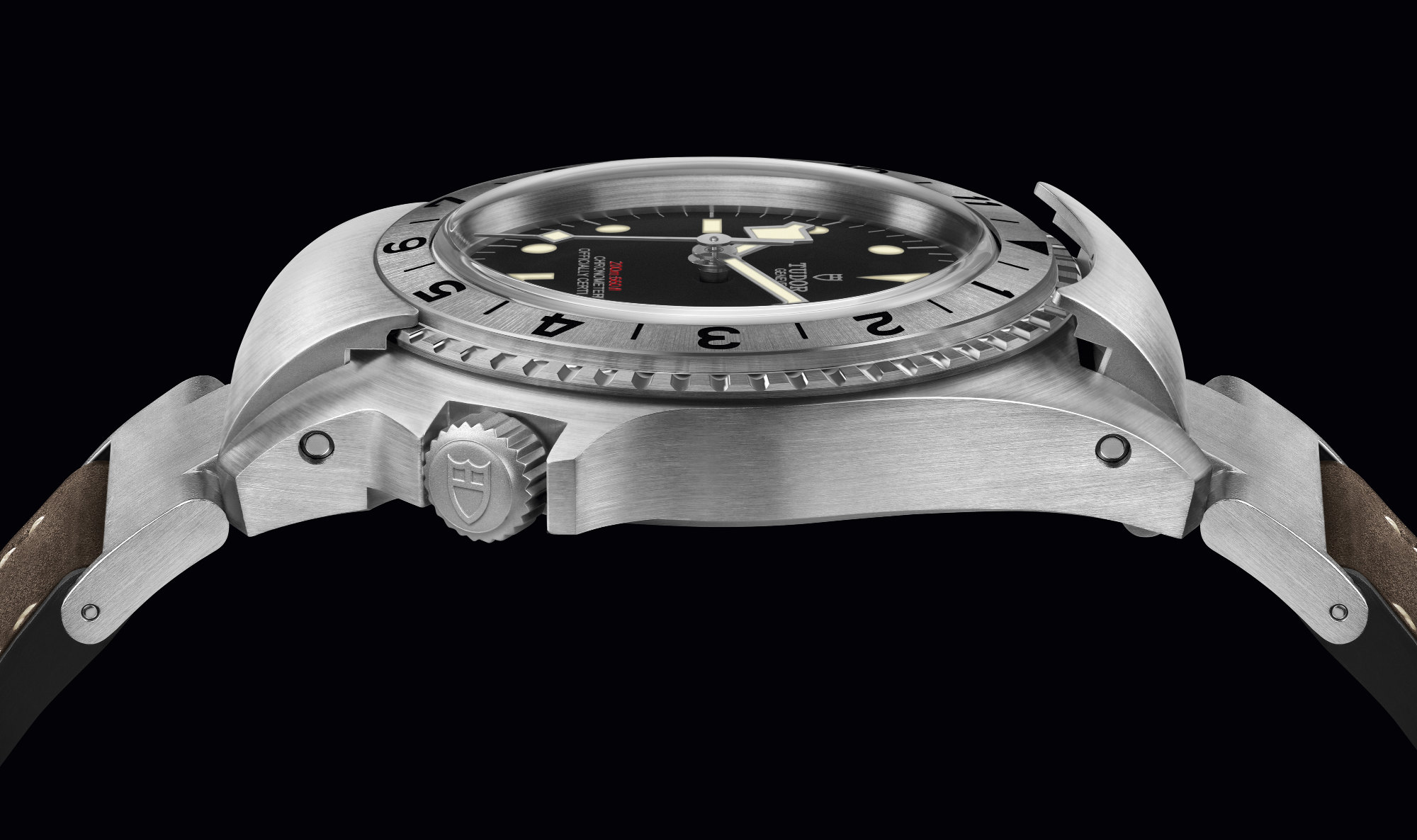