While most watches go by a name, many of their “engines” go by a number. Most watch aficionados know the numbers 7750 and 2824. “7750” is short for the automatic chronograph movement, the tried and tested Valjoux 7750, that’s now the ETA 7750 after the movement giant bought the rights to manufacture the movement. And the 2824 is ETA’s reliable three-hand movement with date indication, which can be found in watches from many brands.

The German manufacturer Nomos on the other hand, came with another method of naming their calibres. They used the Greek alphabet and started with… Alpha. Let’s take a short trip from Alpha to Zeta and find out what comes in between the letters A and the Z.

Alpha, the first letter of the Greek alphabet, and also the first movement developed and manufactured by Nomos. Based on the Peseux 7001 movement produced by ETA, the slim yet robust manually wound movement has been a reliable constant in the collection for 25 years. You can find this movement for instance in the Nomos Tangente (who doesn’t own one?), Ludwig, Tetra, Orion and Club and also in the lovely 33 Series, like the Tangente 33 for Doctors without Borders UK. Now-a-days Nomos manufacture no less than six hand-wound movements! Epsilon is next in line, although not sequential in the Greek alphabet (where Beta comes after Alpha). It was the first movement that Nomos developed in-house and it is an automatic movement. When the small manufacture developed this automatic movement, they established themselves as a ‘manufacture’. With its very attractive price point, Nomos was able to manufacture and sell many watches equipped with the Epsilon. The Epsilon calibre is a three-hand movement showing hours, minutes and seconds, and can be found in the Tangomat, Club Automat, Ludwig Automat, the colourful Ahoi and the Zürich. 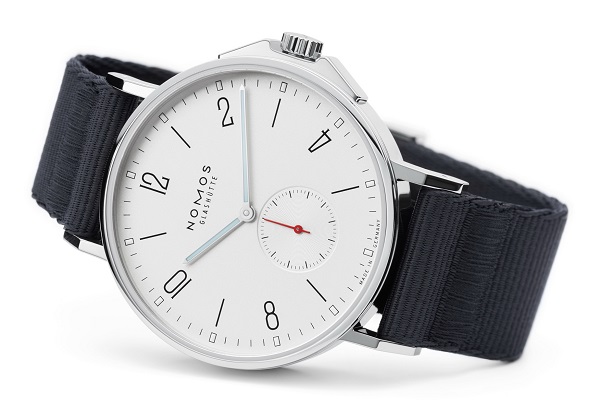 Zeta, the last letter of the alphabet, is Epsilon’s brother and has the extra feature of a date function. As reliable, thin, and well decorated as its siblings, the Zeta is a staple in the Nomos collection for many years. You can find it in the Tangomat Datum and Ahoi Datum among others. 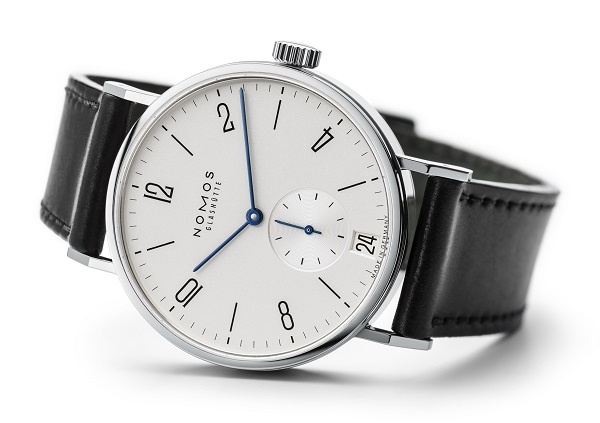 Do not take the Alpha, Epsilon and Zeta for granted! Even with their very affordable pricing, they are still developed and manufactured in-house featuring pèrlage (circular graining) and Glashütte ribbing (the German variation on Côte de Genève). Additionally these movements are adjusted by hand to chronometer levels of accuracy in six positions.

But there’s more. For a few years now Nomos has also been adding calibres to its collection with names starting with DUW. This stands for Deutsche Uhrenwerke – every movement with this prefix is top of the line, featuring the Nomos Swing System. That’s the brand’s in-house tempered blue balance spring, regulator and escapement, combined with the Nomos balance bridge and a three-quarter plate. The latest in the series is the extra-thin DUW 3001 found in the neomatik watches. 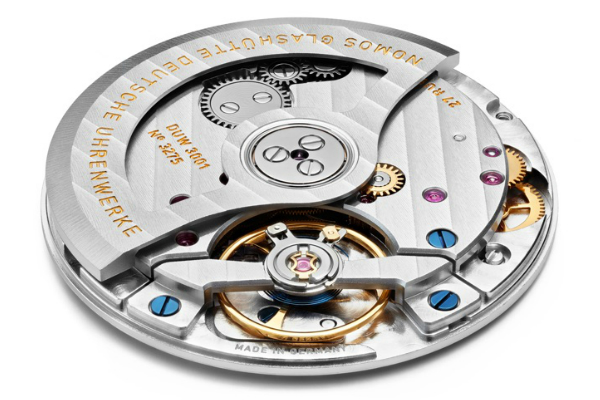 Taking it to the Autobahn with NOMOS

Why You Need a Nomos Orion

25 Years Behind the NOMOS Red Dot