For Part III – Influential women behind the manufacture. From Jasmine Audemars to Carolina Bucci

Audemars Piguet is one of a few watch brands who have been at the forefront of watch production for women. For decades, they’ve designed some of the most important ladies’ watches on the market. At this year’s Salon International de la Haute Horlogerie (SIHH) – one of the biggest watch trade shows – Audemars Piguet added another milestone to their long history of catering to the female watch collector. Releasing the Ladies’ Royal Oak Concept Flying Tourbillon, their latest addition to the Royal Oak Concept collection.

The Ladies’ Royal Oak Concept Flying Tourbillon boasts an impressive design from the inside out. It features a 38.5 mm white gold case set with diamonds in one of two shapes: baguette or brilliant cut. Jewels adorn every angle of the model’s signature eight-sided bezel and lugs, making for an ornate and eye-catching look.

But, the Ladies’ Royal Oak Concept Flying Tourbillon goes beyond high-level gem setting. The all-new Caliber 2951 movement is visible through both the front and back of the case. It showcases an open worked barrel as well as white lacquer and satin-brushed bridges decorated with more diamond accents. However, the crowning glory is the flying tourbillon function at the six-o’clock position. This marks the first flying tourbillion for Audemars Piguet. It’s particularly exciting to see this complication debuted in a ladies’ watch.

This model is the first Royal Oak Concept for women since the collection’s introduction in 2002. The brand’s first Concept watch launched in celebration of the 30thAnniversary of the iconic Royal Oak. It was originally intended to be a one-off, limited edition design produced in only 150 pieces. Then, it ended up turning into a series. The Concept collection is ultra-modern with a focus on creating perfect harmony between the case and movement. Audemars Piguet achieves this balance through a combination of technical precision and cutting-edge micromechanics. The collection is significant for both the brand and the industry at large. Audemars Piguet certainly isn’t the first to present a watch with a futuristic design and movement. However, they are one of the first traditional brands to pioneer such an avant-garde collection.

The bold design of the Ladies’ Royal Oak Concept Flying Tourbillon is undeniably iconic. However, it’s not the sort of watch you’d find in many boutiques. The opulent aesthetic lends itself toward a special occasion, it’s not the sort of watch you’d wear as an everyday watch. Both the original ladies’ Royal Oak and Royal Oak Offshore each make an excellent alternative for everyday wear or for women with more modest style.

The first ladies’ Royal Oak debuted in 1976, four years after the original men’s version launched. Designer Jacqueline Dimier is responsible for reinterpreting Gerald Genta’s legendary brainchild to create the 29mm Reference 8638. She approached the design in a way that upheld the unique character and sporty aesthetic that makes the original so special. This was particularly significant because, at the time, most women’s watches echoed jewellery, not a sporty appeal. Although it’s a resolutely sporty watch, she managed to imbue a certain element of lightness and femininity.

Audemars Piguet appointed Dimier to the head of in-house design shortly after the launch of the Lady Royal Oak. During her tenure, she shaped the direction of numerous men’s and ladies’ watches. Ultimately, she helped solidify the distinctive personality and image of the brand, one that continues to resonate. To this day, she is one of the most prominent female watch designers of the modern era.

Just over twenty years after the debut of the original Royal Oak came the Royal Oak Offshore. In the decades since its introduction, Audemars Piguet has offered variations of the model for both men and women. The design of the Royal Oak Offshore is bigger and bolder than the original Royal Oak. It features a more modern, oversized case and incorporates sportier materials, like rubber and silicon. In the 1990’s, the use of these more experimental materials was even less common than it is today. Yet again, Audemars Piguet was ahead of their time.

A Brief History of Audemars Piguet’s Watches for Women

The Lady Royal Oak and Royal Oak Offshore represent two of the many significant timepieces in Audemars Piguet’s history of ladies’ watches. The brand’s ledgers include ladies’ pocket watches as early as the 1890’s. These models resembled their male counterparts but were smaller in size and often gem studded. Soon after came ladies’ wristwatches, which actually preceded men’s. At the time, wristwatches were considered feminine and too similar to bracelets for men. It wasn’t until the utilitarian wristwatches of the First World War that the wristwatch became popular among the male audience.

The Abiding Allure of the Royal Oak

Even among Audemars Piguet’s rich history of women’s watches, there’s something particularly special about the Lady Royal Oak. Until the debut of this model in 1976, the brand’s ladies’ watches had no official male counterparts. The Lady Royal Oak is the first model to be reimagined from an existing men’s design.

The importance of the Lady Royal Oak continues to be celebrated today. In honour of the model’s 40thAnniversary in 2016, Audemars Piguet released the Royal Oak Frosted Gold. The brand tapped Italian designer Caroline Bucci to collaborate on the piece. Bucci is known for using a unique method called the Florentine finish. This ancient gold hammering technique uses a diamond-tipped, needle-like tool that hammers into the surface of the gold, producing small facets. The result is a diamond-like appearance that creates shimmer and texture. For the Frosted Gold, this process took over a year to perfect. The limited edition collection was produced in both rose and white gold. There were also two size and movement options: a 33mm with a quartz movement and a 37mm with an automatic Caliber 3120. Ultimately, the design of the Frosted Gold epitomizes that balance of sport and glamour that Dimier achieved with the original Lady Royal Oak.

State of the Watch Market for Women

Audemars Piguet’s range of offerings for women – from traditional to avant-garde to technical – illustrates the growing demand for equality in the watch industry. Models like the Ladies’ Royal Oak Concept Flying Tourbillon, Royal Oak Frosted Gold, and classic Lady Royal Oak and Royal Oak Offshore demonstrate the unique and diverse tastes of female collectors. There appears to be a renewed push to recognize that women are just as interested in watches as men. Brands have responded by releasing more complicated and experimental models for ladies. And Audemars Piguet’s design work exemplifies the larger effort to focus attention on the female market.

The modern woman is no longer satisfied with a bracelet or piece of jewellery that happens to keep time. She requires a timepiece with substance. One that is just as capable and technically complex as the watches made for her male counterparts. She wants a status symbol on her wrist that reflects her command in business, politics, and beyond. Plus, she has her own independent spending power to make such an investment. 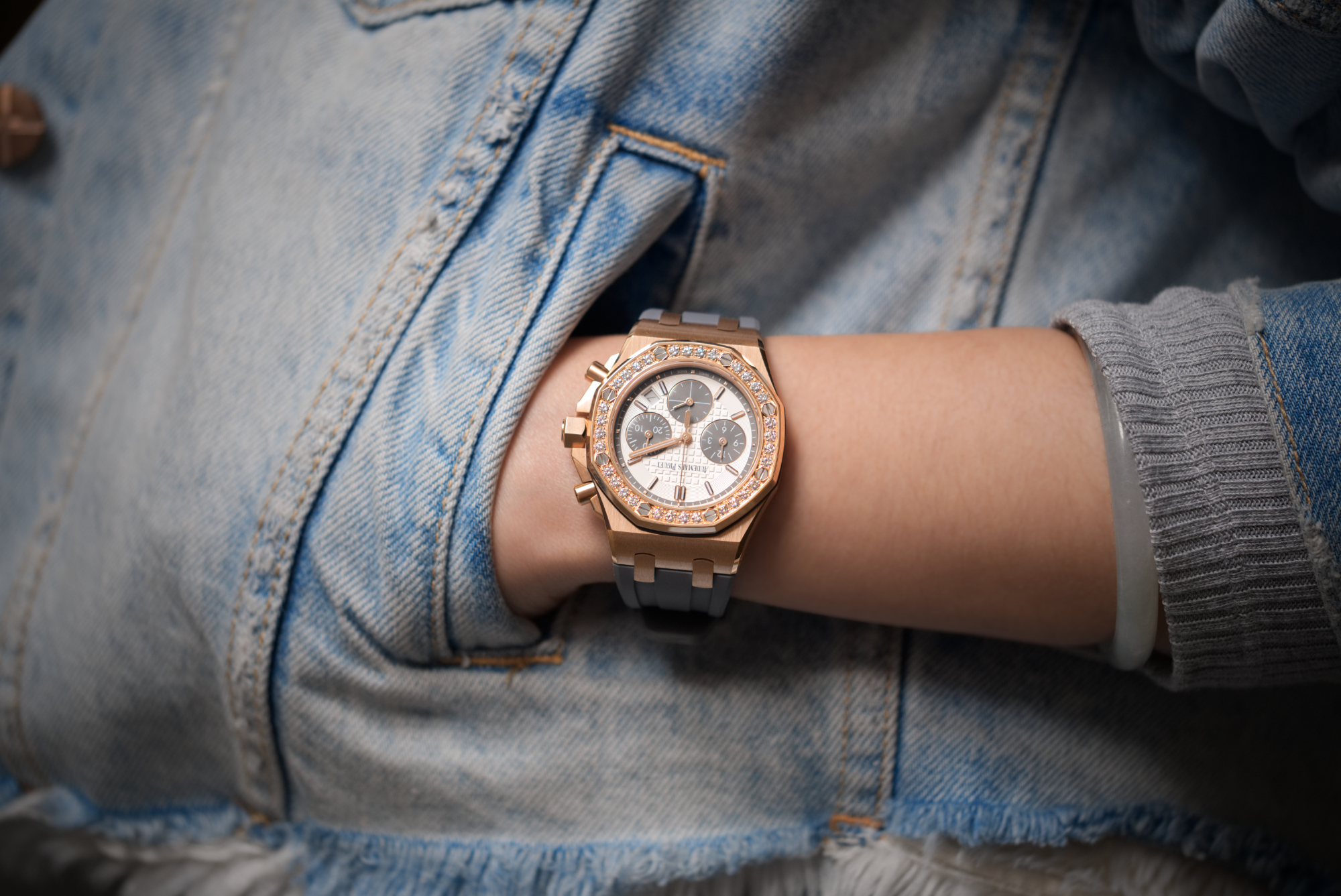 Brands like Audemars Piguet and Patek Philippe have long been ahead of the curve. They’ve not just recognized women’s place in the watch industry,  they’ve filled a void many other brands have failed to prioritize. They’ve also placed women at the forefront of the company, from designers like Dimier and Bucci to key members of the family, like Chairwoman of the Board of Directors Jasmine Audemars. It will be exciting to see how Audemars Piguet continues to expand their offerings for female collectors in the years to come.

For Part III – Influential women behind the manufacture. From Jasmine Audemars to Carolina Bucci

Tudor’s Ambassadors – From the All Blacks to Jay Chou