The Ten Most Important Watches of the Post-Quartz Era

In looking at the history of watchmaking over the decades after the Quartz Crisis, it is clear that the industry owes its present-day success to a handful of visionary watchmakers, designers and entrepreneurs who initiated a counter-revolution to revive that which had been abandoned during the dark days of the 1970s. In so doing, they defined contemporary horology as we know it today and transformed an ancient art into one of the most commercially successful luxury genres in the world. Hereby are ten important watches of the post-quartz era that paved a new world at the point of their inception. 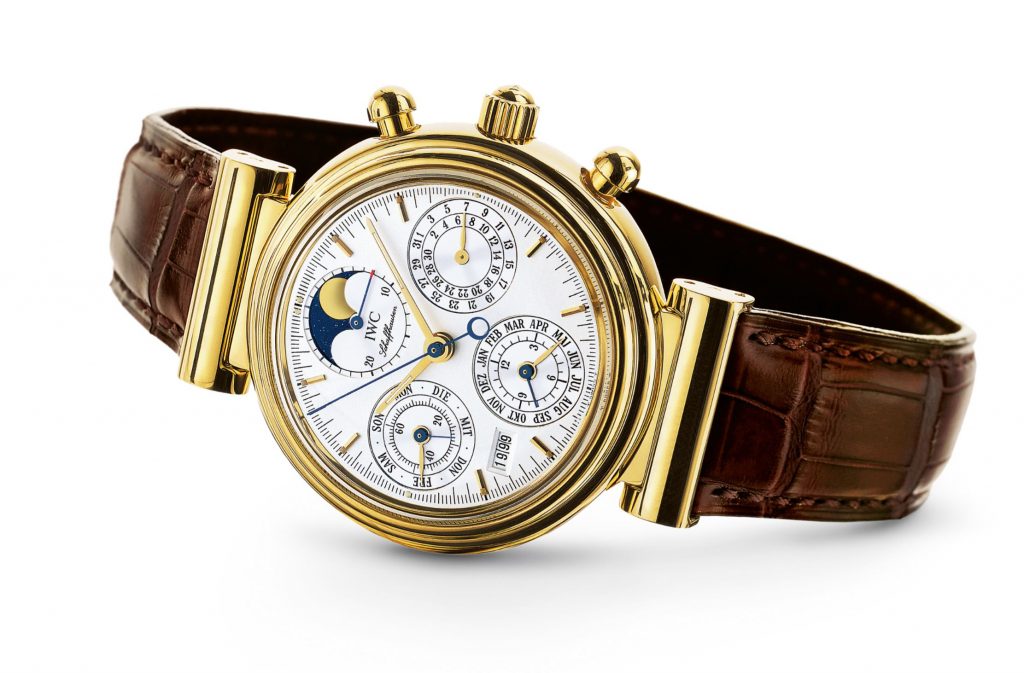 The Royal Oak was a watch borne of the Quartz Crisis, making its debut a few years after the 1969 launch of the Seiko 35SQ Astron. Audemars Piguet was near the brink when its then managing director, Georges Golay, tasked Gerald Genta on the eve of Baselworld 1971 to design a steel sports watch with robust versatility and a luxurious flair.

Famously designed in a day, the Royal Oak upended all notions of what a luxury watch ought to be. It had an octagonal bezel inspired by a hardhat diver’s helmet and was secured by eight hexagonal nuts, with a water resistance ensured by a gasket between the crystal and the bezel ring. It was also significant in size – 39mm – by standards of the day and had a chequerboard “tapisserie” dial.

The stainless-steel beast not only represented a new aesthetic field in an era of round watches, but it also bravely commanded the price of a gold watch. While it was slow to success – universally panned at the point of its launch – the Royal Oak pioneered a category of sport watches, which many brands, suffice to say, have tried and fumbled to match through the years. 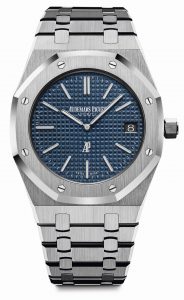 In 1992, Franck Müller presented his new firm’s first eight watches at SIHH. After almost of decade of making complicated watches privately as a niche independent watchmaker, he founded his own company with the financial backing of Vartan Sirmakes, a Geneva watch case manufacturer whose clients included the likes of Patek Philippe and Daniel Roth. Müller brought something new to watchmaking when the prevailing wisdom of independent watchmakers at the time was a Breguet-like approach. Inspired by vintage barrel-shaped watches from the likes of Cartier and Elgin, the Cintrée Curvex was a large tonneau case that curved on three axes. With a dial of fancy Art Deco numerals, it ran triumphant against watches that were considerably more sober in colour and design, becoming a runaway bestseller of the 1990s and turning Franck Muller into a brand with a nine-figure turnover in barely a decade. 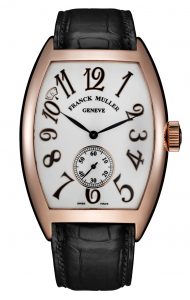 It was in 1949 when Panerai introduced a ground-breaking self-luminous substance which was not only safer than the radium-based powder used in the Radiomir but also more luminous. It was made with a tritium, an isotype of hydrogen. By 1955, the evolution from Radiomir to Luminor was completed with the invention of the signature crown-protecting bridge and a lever to strengthen the watch’s water-resistance. Evidently, these watches were developed specifically for the military and it wasn’t until after the Quartz Crisis and under the stewardship of then chief executive Dino Zei in 1993 when they were released for commercial and civilian purposes. Enormous at the time, the 44mm Panerai watches caught on with a handful of collectors, and fortunately, a few celebrities.

The story goes that Sylvester Stallone’s interest in the brand, which led him to sport a Panerai Luminor Marina in the film Daylight, would catch the attention of Johann Rupert, the owner of the luxury conglomerate Richemont, who eventually acquired the marque in 1997. Bestowing upon Panerai a skilled management team with skills honed at Cartier, another Richemont brand, Richemont quickly saw its investment recouped, and Panerai going on to become a star of the new millennium.

As casualties of the Quartz Crisis were licking their wounds back in Switzerland, German watchmaking was on the cusp of a revival. In 1994, the Lange 1, along with three other watches, marked the rebirth of A. Lange & Söhne, whose past was stunted by wars, both hot and Cold. After the reunification of Germany in 1990, Walter Lange had seen an opportunity to revive the company of his forefathers – and the downtrodden East German town of Glashütte in the process.

The Lange 1, with its asymmetrical dial, was singular in its design, which Lange had later elucidated that it was thanks to its adherence to the golden ratio. With time displayed in an off-centred dial on the left, a small seconds at five o’clock, a large power reserve indicator and the patented big date with a corrector pusher, it create a new design language for contemporary Saxon watch design while using elements of historical German watchmaking to create a movement that was a revelation in 1994. 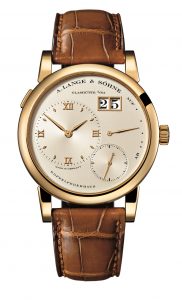 When Ulysse Nardin released the Freak in 2001, it fomented a revolution on three fundamental fronts: design, mechanical and material. In fact, while watches in its immediate past were arguably pre-emptive defence mechanisms against the corruption of quartz, the Freak was a genuine reinvention that would pick up the baton from whence Breguet’s 19th century invention had left off. The original design of the Freak came from Carole Forestier, who saw the tourbillon as an entirely new way of displaying time. Ulysse Nardin, under the auspices of its owner, the late Rolf Schnyder, purchased the patent from Forestier, and together with a Vatican clock restorer, Ludwig Oechslin, the concept came to fruition.

The Freak had neither hands nor a dial, instead, a baguette-shaped movement, which was mounted on a huge coiled mainspring that occupied the entire caseback, rotated once per hour and doubled as the minute hand. Furthermore, the Freak boasted a patented Dual Direct escapement that was based on the principle of Breguet’s natural escapement. It had addressed the issue Breguet had faced with the manufacturing tolerances of his time with the use of monocrystalline silicon. The Freak was the first watch in history with a silicium escapement, thereby ushering in the age of silicon, a material now used by all of Switzerland’s biggest watch brands. 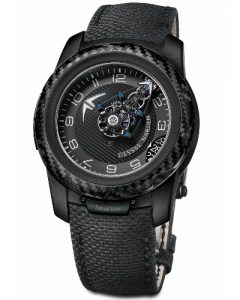 In 1988, Breguet introduced its first tourbillon wristwatch, the ref. 3357 which used a movement made by Nouvelle Lémania. While Audemars Piguet created the first serially-produced tourbillon wristwatch (that also happened to be the first automatic tourbillon), it was Breguet’s iteration that would become the template for many other manufactures (partly because the Audemars Piguet was quirky and unreliable). Positioned at six o’clock was a one-minute tourbillon with a three-armed carriage indicating the seconds, while the classic Breguet style with a guilloche dial and fluted case became the quintessential look of an expensive watch. 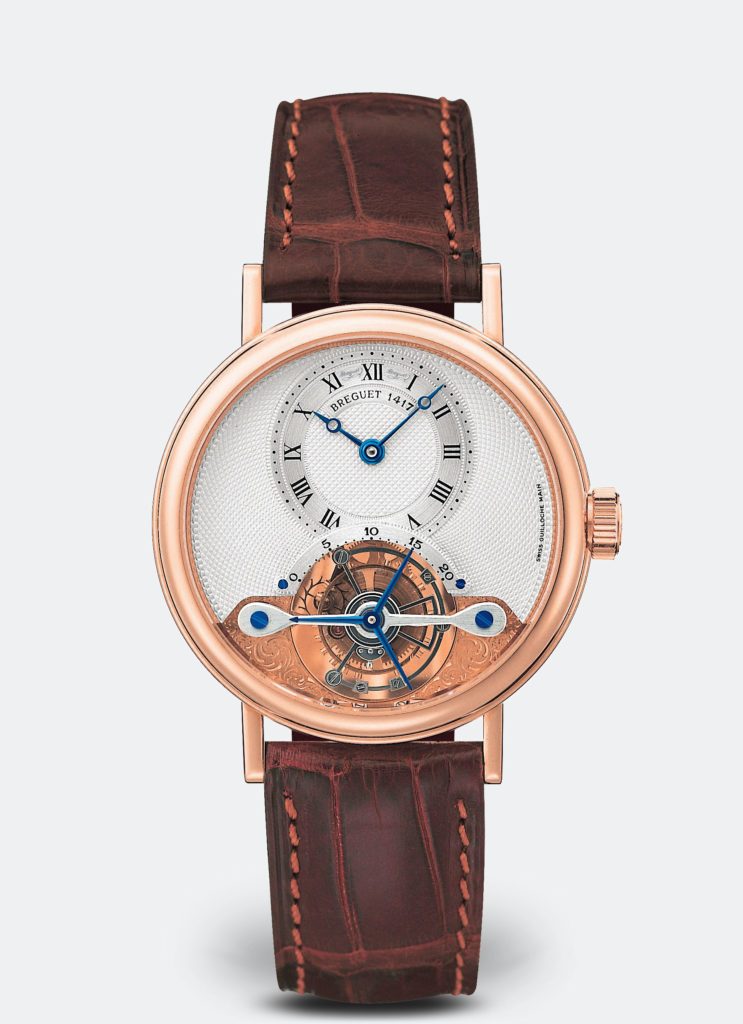 The 2000s was certainly a decade when horology’s freethinkers came out to play. Chief amongst them was Maximilian Büsser who incorporated MB&F in 2005 after ending his seven-year stint as chief executive of Harry Winston Rare Timepieces. Two years later, he launched the Horological Machine 1, which was where the brand’s progressive design language took root. It not only challenged design conventions with its unusual form, but it also pushed technical boundaries with movement featuring a central tourbillon regulator derived from a STT base, but heavily modified to have four barrels and a seven-day power reserve. Equally progressive was his business model, which was ingrained in the company’s name. Büsser’s predilection for collaboration, as proven fruitful at Harry Winston with its Opus series of avant-garde watches, saw him embark on myriad subsequent collaborations with fellow independent watchmakers, designers and professionals to create some of the most fantastical gadgets, in watchmaking – and beyond. 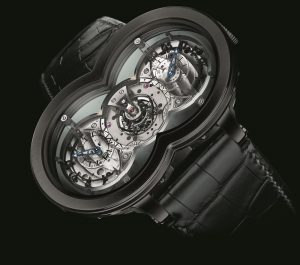 At the dawn of the new millennium, Richard Mille founded his company and with it, the launch of the RM 001 model. It had a radically modern design that was unlike anything that came before. It had a fascinating tourbillon movement with an unusual architecture inspired by Formula 1 engine design was developed by complications specialist Renaud & Papi and it established the look of the brand. Since then, three-dimensional constructions, cutting edge materials along with its no-holds-barred approach to materials and costs have culminated in watches of extreme performance as evidenced by Rafael Nadal wearing one while playing, and Richard Mille himself being inclined towards throwing his watches across the room to demonstrate their shock resistance. Today, Mille’s watches represent some of the most wildly expensive yet culturally and commercially salient timepieces in the market. 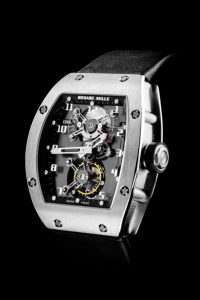 In the depths of the Quartz Crisis, when a future with pricey, complicated mechanical watches seemed unthinkable, Audemars Piguet unveiled what was then the thinnest perpetual calendar wristwatch. The ref. 5548 was launched in 1978, powered by a movement just 3.95mm high, remarkably slim even by modern standards.

More important than its tangible qualities, the ref. 5548 proved that there still was demand for high-end mechanical watches made in Switzerland. It became one of the company’s best sellers, with Audemars Piguet producing several hundred a year in the early 1980s – this was before the Royal Oak became the smash hit it is today – helping keep the company financially sound. 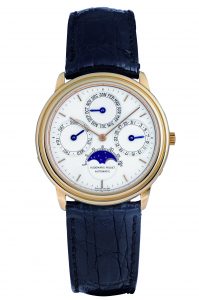