Self-Regulating Revolution With The Urwerk EMC

With the designs, complications, rarity and sense of fulfillment a wristwatch can offer, it’s easy to forget that the core purpose of a watch is first and foremost that of a precision instrument.

While brands and watchmakers take all the necessary steps to ensure that every watch operates optimally under different conditions, the nature of a mechanical watch escapement means that it is vulnerable to the effects of gravity. In other words, the way a person wears a watch, essentially his or her lifestyle, can have a dramatic impact on how a watch performs.

Now, it’s not that finding the watch’s performance “sweet spot” is difficult per se. Sometimes regulating can be as easy as turning a screw. The problem is that adjustment always requires a watchmaker opening up the watch to make it happen, something watch owners usually dread – separation anxiety anyone?

There is an exception, and good news for those who can’t bear to part with their watches. Perhaps not surprisingly, it comes from one of the most creative independent watch brands out there: Urwerk. 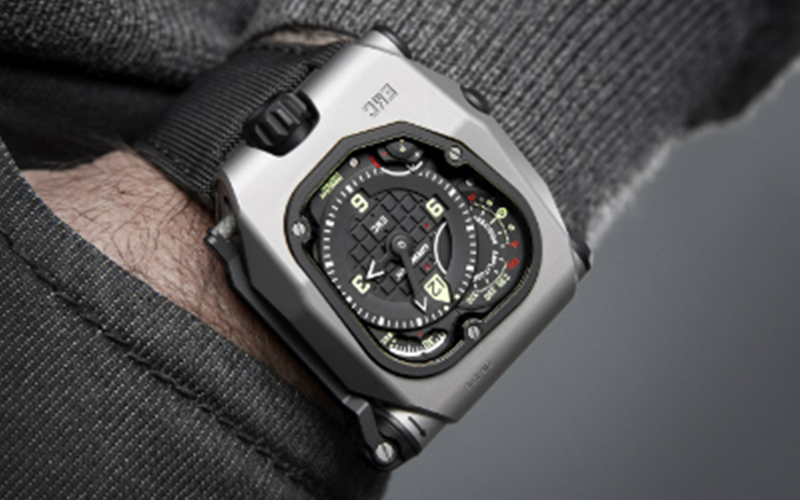 While better known for its futuristic styling combined with alternative approaches to displaying the passage of time, Urwerk took a more fundamental rethink with the EMC, and the result is nothing short of radical.

Upon first glance, the EMC has the unusual case silhouette you would expect of an Urwerk, but otherwise the time display is fairly traditional, which is very, very unlike Urwerk. But then again, the EMC isn’t about the spectacle. Then there’s that crank sticking out of the side of the case.

The Urwerk EMC represents what a watch lover could call the perfect hybrid of mechanics and electronics. At its core is a manual-winding movement with a 4Hz escapement, traditional in construction and principles. But incorporated into the movement is an electronic module that allows the wearer to check the movement’s rate and amplitude, and a separate mechanism to regulate the escapement.

This technical achievement is so tremendous that Urwerk’s EMC was awarded both the “Mechanical Exception” and “Innovation” prizes at the 2014 Grand Prix d’Horlogerie de Genève, the most important award ceremony in the Swiss watchmaking calendar.

Without getting overly technical, the way the regulation system works is fairly simple. First, the foldout crank handle is used to charge the electronic processor’s super-capacitor, which doesn’t contain a battery. When enough energy is generated, the user simply pushes a button, whereby an optical sensor above the escapement measures the oscillation rate of the 4Hz (or 28,800 beats per hour) escapement for a period of three seconds.

The result is then compared against the electronic module’s 16m hertz electronic oscillator (the higher the frequency of an oscillator, the more accurate it is), allowing accurate measurement right down to 0.000001 of a second.

So a measured variation of just 0.0000014 of a second per half-vibration translates to a variation of one second per day in the function of escapement. The user can then fine-tune his watch based on this result with the push of a button.

It is this ability for the owner to tap directly into the heart of his or her watch and perform something that normally only a watchmaker can do that makes the Urwerk EMC such a singular timepiece. The watch’s timekeeping function works independently of the electronic component. 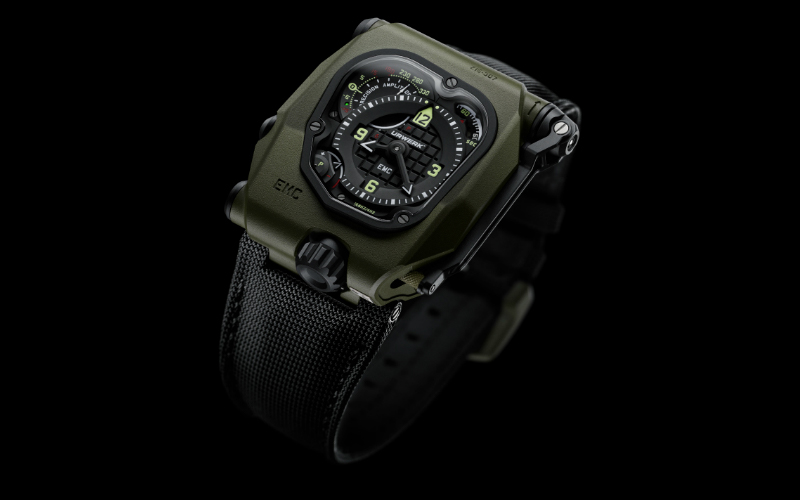 The Time Hunter is the second iteration of the experimental EMC, featuring the same award-winning movement in a new military-inspired form. The time displays are no longer sectioned, and the hands and dial are more legible thanks to a generous amount of SuperLuminova and rethought layout. Whether in green ceramic or titanium, the EMC Time Hunter remains an utterly unique kind of watch that offers a sort of interactivity with the user to an extent that’s never been done before; all while remaining inherently Urwerk.