MB&F proudly presents their 10th Anniversary Horological Machine: HMX. “X” because this Machine has a very special place among MB&F’s sequence of numbered Machines… and “X” like the Roman numeral for 10.

10 years of absolute independence. Definitely not a smooth and easy ride, but a wild, unpredictable, constantly challenging adventure. Several times in the brand’s brief history, it feared for its very existence. But as they say, “what doesn’t kill you makes you stronger”. 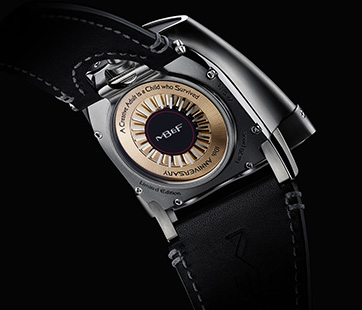 If MB&F followed the watchmaking industry’s conventions, it would be by celebrating this first decade with an extremely complicated, very expensive timepiece. But the brand doesn’t like conventions. So HMX is exactly the opposite: by sacrificing margins, they are offering a true MB&F Horological Machine, at an unprecedented price. This is their way of expressing their thanks to an absolutely vital group of Friends: the collectors who have supported the brand from the beginning.

Before discovering watchmaking, Maximilian Büsser aspired to be a car designer; so like our previous HM5, this anniversary piece just had to be inspired by the sports cars we loved during our childhood. But while HM5 echoed the bold designs of Bertone, HMX was sketched with finer, more elegant lines: those of coachbuilders like the legendary Carrozzeria Touring, who championed the “Superleggera” approach.

The result is a Horological Machine that will make your wrist look fast. Four limited editions of 20 pieces in Lotus Black, Ferrari Red, Bugatti Blue or British Racing Green, HMX is of course a true driver’s watch, crafted in stainless steel and Grade 5 titanium. Two optically-engineered sapphire crystal prisms reflect and magnify the bi-directional jumping hours and trailing minutes. The automatic movement is powered by a special rotor engraved with our anniversary slogan: “A creative adult is a child who survived”.

And not to mention: if you look closely at the HMX engine, you’ll notice what seem to be two oil caps on valve rocker covers… Those are indeed real oil caps, which the watchmaker will need to unscrew during servicing, to add oil and lubricate the jewels below.

The Hour Glass is the proud exclusive distributor of MB&F.