If there were a People’s Choice Award for the world’s favourite colour, blue would win hands down. No surprise then that watchmakers have been serving up scores of blue dial beauts over the last couple of years. You could hardly fault them for doing so: cobalt or electric blue shades lend themselves well to sporty tickers, while midnight or navy tones suggest chic sophistication. Here are five blue bloods worth mentioning.

Girard-Perregaux 1966
By definition, a minimalist three-hand watch should not be effervescent – the whole point is that it ought to convey an aura of discreet elegance. But this Girard-Perregaux 1966 model defies convention with its striking blue dial. Slightly domed and with a sunray finish, light appears to dance on its surface. Gilded baton hour markers and feuille (leaf)-shaped hands lend a refined touch, while a manufacture movement offers assurance of its technical fortitude. A blue alligator strap completes the handsome package. 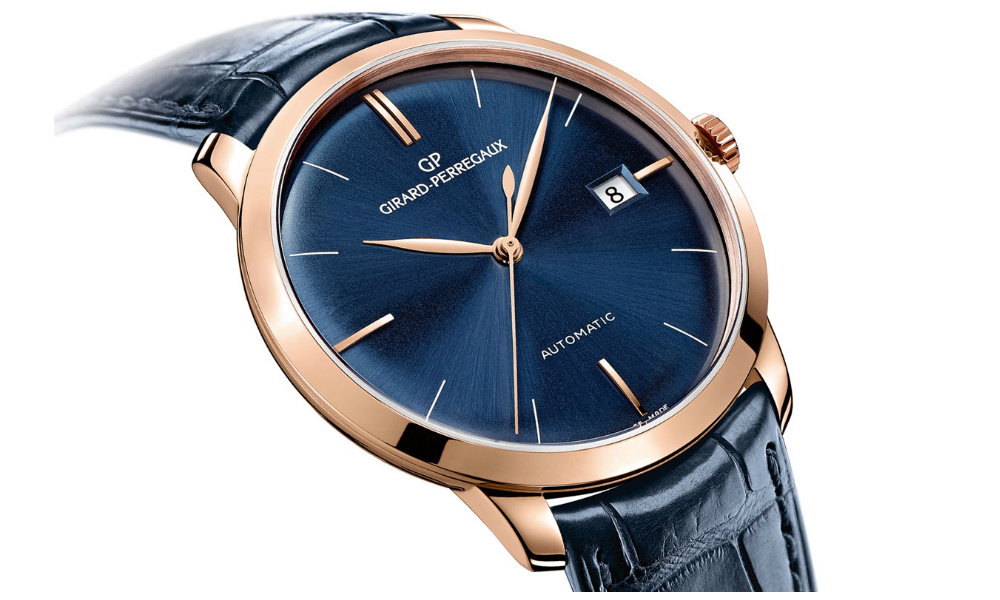 Girard-Perregaux’s 1966 is striking in its simplicity

Hublot Classic Fusion Blue King Gold
The simplest solutions are often the most elegant. Case in point: Hublot’s Classic Fusion with blue dial. Four versions exist – a three-hander and chronograph, each in titanium and King Gold – but we’re sold on the time-only model in King Gold. The combo is a knockout – the warmth and lustre of the metal is both a perfect foil and complement to the deep blue tones of the sunray-finished dial. Enhancing this palette is a dark blue rubberised alligator strap with cobalt blue stitching. 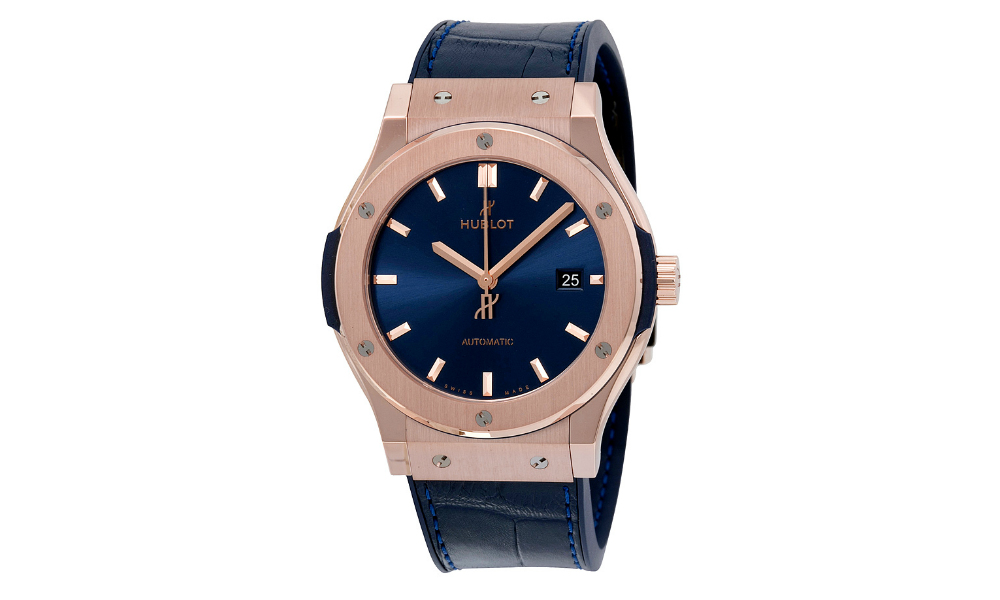 MB&F LM101
Blue dials seem to be a favourite of MB&F of late. Just last November, the company unleashed its Legacy Machine Perpetual with a beguiling sky-blue dial. Or plate, to be precise, since there is no dial proper to speak of. Then in January, it let loose a platinum-cased version of the Legacy Machine 101 in the same azure finish. The watch, if you remember, was first launched in red or white gold, and then last year in yellow gold with a special frosted finish on the plate. 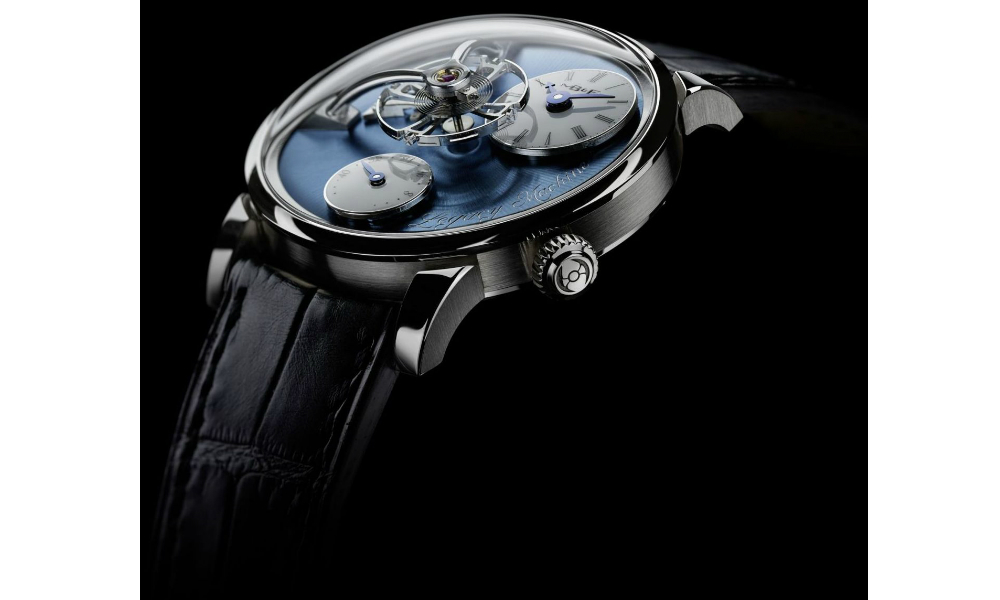 Patek Philippe Sky Moon Tourbillon Ref. 6002G
Patek Philippe’s Sky Moon Tourbillon boasts not one but two blue dials, framed by a sensational white gold case engraved with florid scrolls. The effect is rather like that of a picture frame. The captivating main dial is formed using champlevé and cloisonné enamelling, with two different shades of blue for better contrast. The rear dial is also cloaked in two different shades of blue enamel, an apt choice, considering that it displays sidereal time and celestial functions. Adding a nice finishing touch is a dark blue alligator strap. 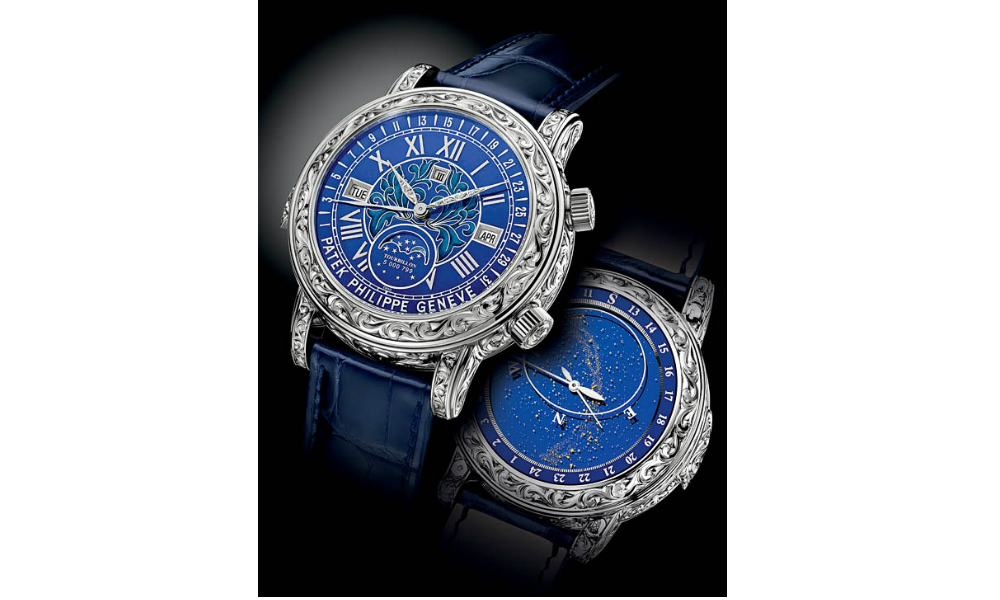 Rolex Oyster Perpetual Milgauss Z Blue
When Rolex launched a blue version of the Milgauss, they coined a new term for the shade: “Z Blue”. It’s best described as an electric blue – perhaps an allusion to the emblematic lightning bolt-shaped seconds hand. The dial itself is rather electric with its lustrous sunray finish. And depending on the ambient lighting and angle of view, it takes on a turquoise hue under the green sapphire crystal. The effect is positively magnetic, to say the least. 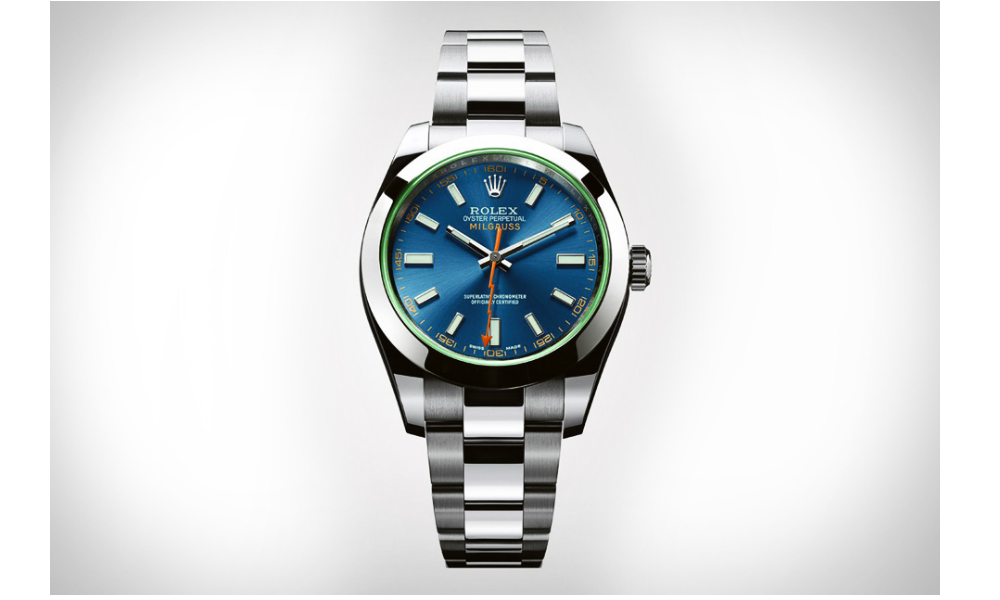 The blue hue of Rolex’s Milgauss is supercharged