The Jaeger-LeCoultre Polaris Mariner collection demonstrates the brand’s ability to construct serious tool watches while remaining true to their technical and artistic expertise. Throughout history, divers relied on their watches as tools to signify when to resurface from the depths of the ocean. However, what sets the Polaris Mariner apart from its competitors then and now, is that it taps into a history featuring a unique striking bell, an alarm that cleverly sounds off warnings as time passes.

The Memovox first launched in 1950 and featured Calibre 489 which was a hand winding movement. It had two separate crowns which the wearer could adjust individually, one for the time and one for the alarm. To think of the practicality of a mechanical alarm watch is difficult to one currently living in the present. I mean, we are a society guilty of consuming the latest smartphones so why the need for outdated technology? One word guys, charm. But think back to a time when the technology that we take for granted today never existed. A mechanical alarm in a watch was innovation at its finest and it’s no wonder why they call Jaeger-LeCoultre “the watchmaker’s watchmaker”. Yes, this is becoming a cliché in our small community but remember, clichés are what they are because most times, they are true. The alarm mechanism manufactured by Jaeger-LeCoultre found their way into multiple models featuring a range of purposes. Word on the street is that there was even one developed to tell the wearer when a parking metre was up! Nine years later, the world was introduced to Jaeger-LeCoultre’s first real dive watch, the Memovox Deep Sea. Sources state that only 1 061 pieces were made which is why this watch is said to be extremely difficult to source (regardless of condition) by vintage collectors. One aspect that I personally quite like about this piece is that it featured two crowns and a non-rotating bezel. Wait, non-rotating bezel? But why? Well, because Jaeger-LeCoultre simply thought that alarms were more functional than a diver checking their watch underwater and that totally makes sense.

Moving forward to 1968, the brand released their improved version of the dive watch and titled it as the Memovox Polaris. Unlike the previous Deep Sea, the Polaris featured three large crowns. Two of the crowns functioned similarly to the previous model discussed but with an added crown that turned the inner bezel. I guess Jaeger-LeCoultre decided that to be a true dive watch, they needed to add this missing component (and we love it). In 2018, a reissue of the 1968 Polaris was released to the joy of collectors and allowed us to have an opportunity (even for a short time) to acquire a piece of history. Note, that vintage examples of the original 1968 model are also extremely difficult to source. The Polaris Mariner of 2020

Here we are in 2020 and boy has the watch community grown stronger than ever. Regardless of COVID being a catalyst for an increase in online shopping (especially watch purchases), collectors and enthusiasts alike have developed a strong appetite for steel sports watches. Competitors are releasing sports pieces left, right and centre. Jaeger-LeCoultre’s answer to this demand of course, is the new Polaris Mariner collection which offers two examples, the Mariner Date and the Mariner Memovox. What’s the difference between the two models?

Ignoring that the Date model features two crowns versus the three crowns on the Memovox, one would hardly find any differences between the two models. In terms of aesthetics, there is a subtle difference being the thickness of the case of course and the word ‘Memovox’ positioned underneath the 12 o’clock marker. The main difference only becomes obvious when you flip both pieces over and observe their movements through the sapphire case-back. Powering the Mariner Memovox is Calibre 956 which is a descendant from Jaeger-LeCoultre’s first automatic alarm caliber. The update on this piece is that because the Mariner comes equipped with an exhibition case-back, the gong has now been moved to the side of the case; previously they were attached to the case-back (back when solid case-backs were used). Another important feature is that designers wanted to ensure that when one were to observe the movement and the alarm in action, they would enjoy the complete show. This required engineers to come up with a solution to eliminate obstructions and so therefore, an open worked rotor was designed. The Mariner Date on the other hand, opts for a more classic interpretation and omits the alarm function. The Date version is powered by Calibre 899 and has been updated to guarantee wearers a power reserve of 70 hours. 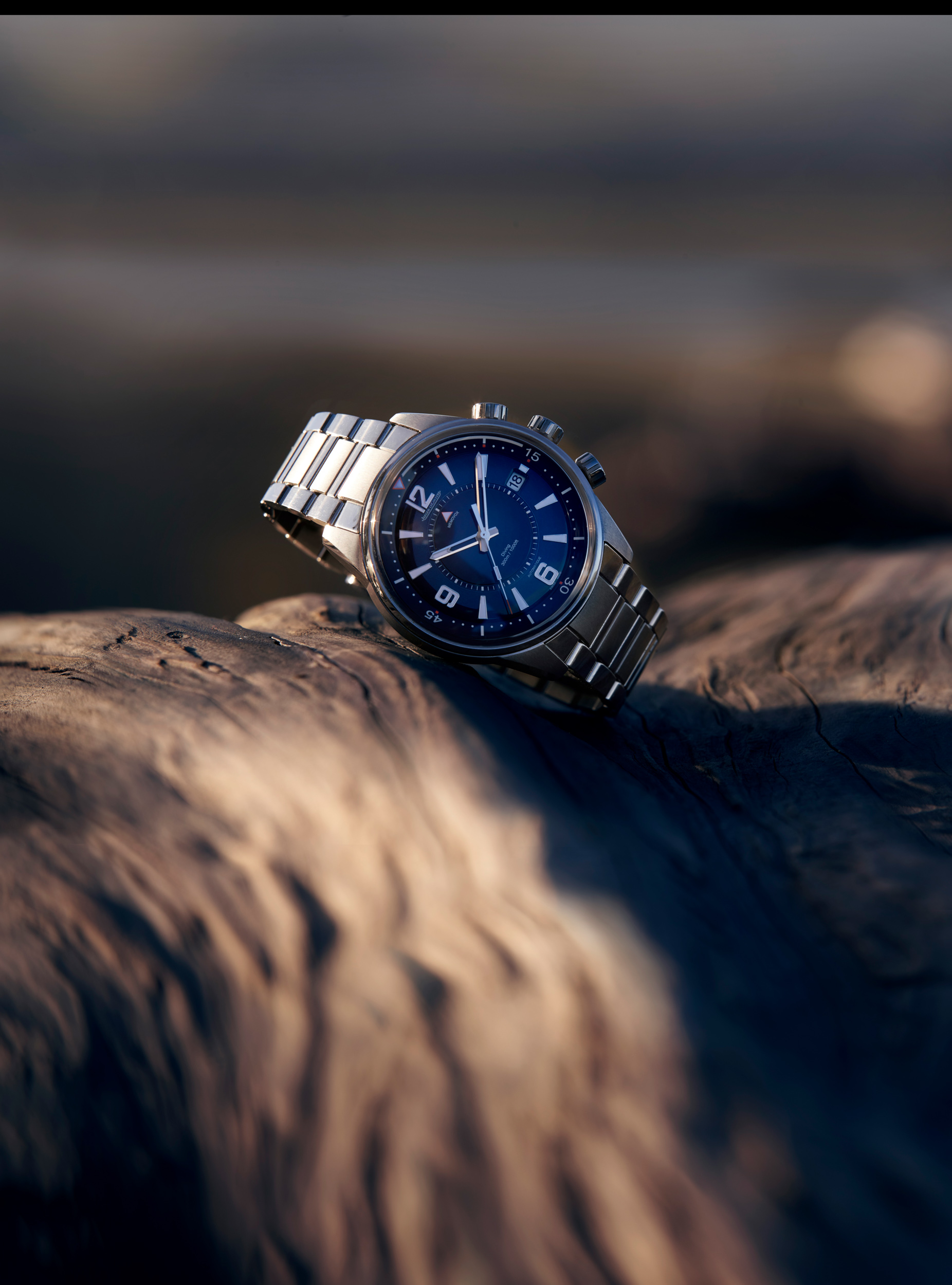 Besides the key details I mentioned above, let us first celebrate that this collection is fully ISO 6425 compliant and come with a generous 300 metres of water resistance! Now before we go diving (or imagine to), we should take a moment or two to appreciate how beautiful the dials are on both models. The inspiration for these appears to be from a certain model from the 70s which showcases a rich gradient-blue colour. Following this theme, there is another layer of contrast with the centre circle being sunray-brushed, the middle ring with graining and the unidirectional bezel finished with an opaline texture. The purpose of these design elements is of course mimicking the depths of the deep sea. When it comes to real dive watches, legibility is key and the Mariner collection leaves nothing out. The hands, indexes and numerals come equipped with SuperLumiNova which makes sense as one would be placed in an environment with low light. On top of that, just to be extra safe, Jaeger-LeCoultre has also incorporated bright orange markers and distinguishing luminescent to determine the minute (orange) and hour (blue) hands. But wait, there is more! For added safety of the watch, when the crown is pulled out there is an orange (to stick with the theme) security band that tells the diver that it is not fully screwed down.